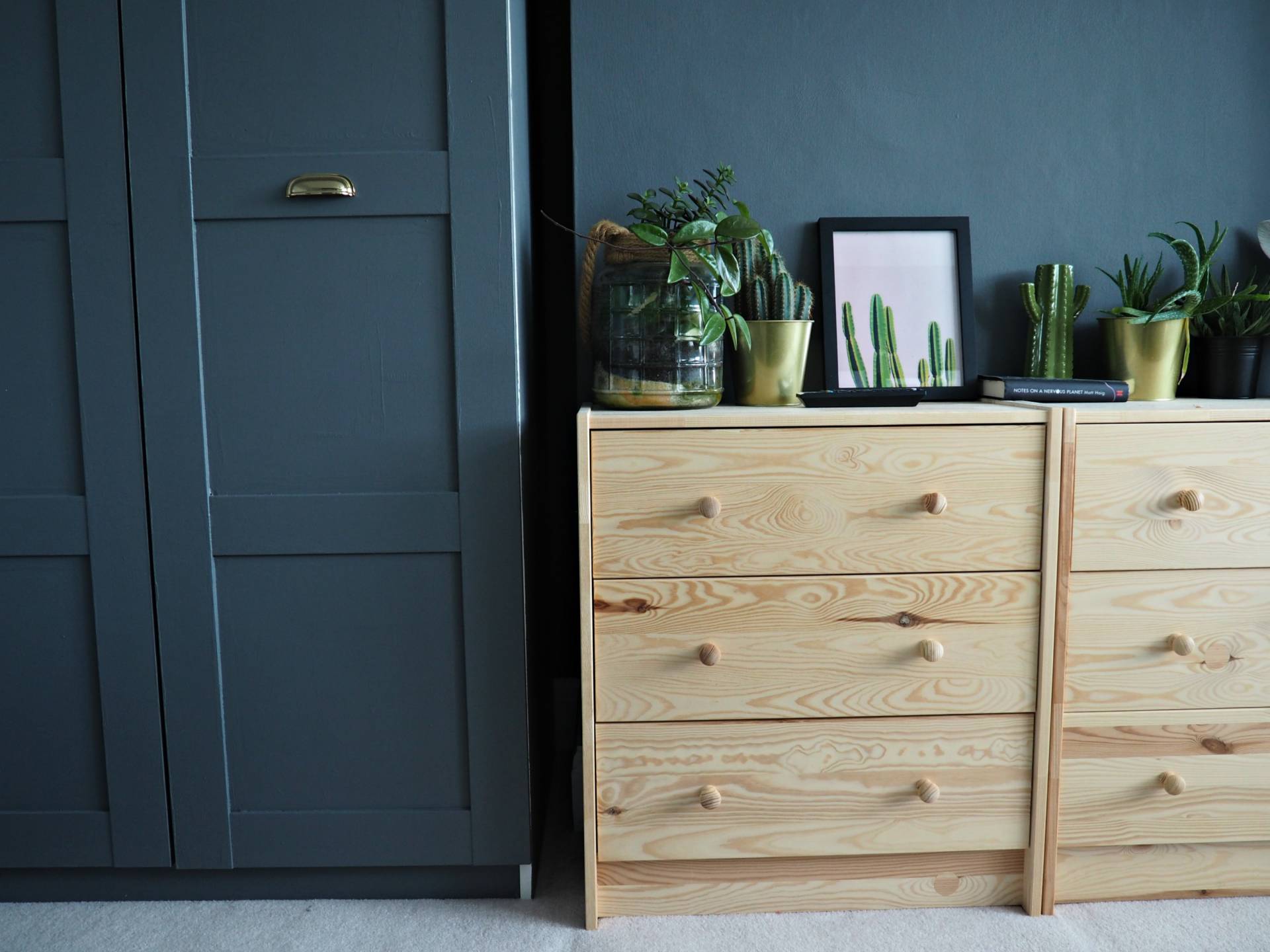 It’s 5 months since we moved into our new house. Part of me feels like we’ve been here so much longer, and the other part can’t believe that 5 months has flown by in the blink of an eye! It really does feel like home though, even though we’ve got loads that we still want to do, and even though our old house was lovely, we’re really appreciating the extra space here. It’s interesting though, as even though each of the children now has their own bedroom, they still often prefer to hang out and play downstairs (and bring all their stuff with them!) so that actually hasn’t changed much compared to the old place. Sasha will often venture upstairs and play in her room, but Freddie is very much a living room kinda guy!

Whilst I’m itching to get on and do some work, it’s actually been quite a good thing to know that we have to sit tight for a bit and live in our home first before we can do anything, something that we haven’t done before. And the reason I’m glad is that we have kept changing our minds with what we might want to do with certain spaces, so it’s good that we’re not able to rush in and start a big project like we have done with our last two houses.

Today I thought I’d walk you through our house and show you in photos a little of what we’ve achieved so far, what is left to do, and mind dump what we think we might do to the house in terms of big building work. I hope that just using photos makes sense- I’m considering doing a video tour and if I end up doing this will add it to the bottom of this blog post!

Just a heads up- these photos haven’t been styled in any way at all, so the kids rooms are fairly messy, there is washing about and bits and bobs in places they probably shouldn’t be! For the more formal ‘after’ renovation/redecoration posts I make the rooms look all pretty, but this is a real life snapshot of how we’re living at the moment

I won’t show you every detail of the kids bedrooms (I’ve already covered Sasha’s bedroom makeover here), but they were always a first priority to make them feel settled and at home and (thanks to my Mum’s decorating skills!) they are pretty much done. I just have to buy some new matching storage boxes for the Ikea Kallax for the boys’ bedrooms, and then some frames for the prints that are going to go on Arlo’s big wall. 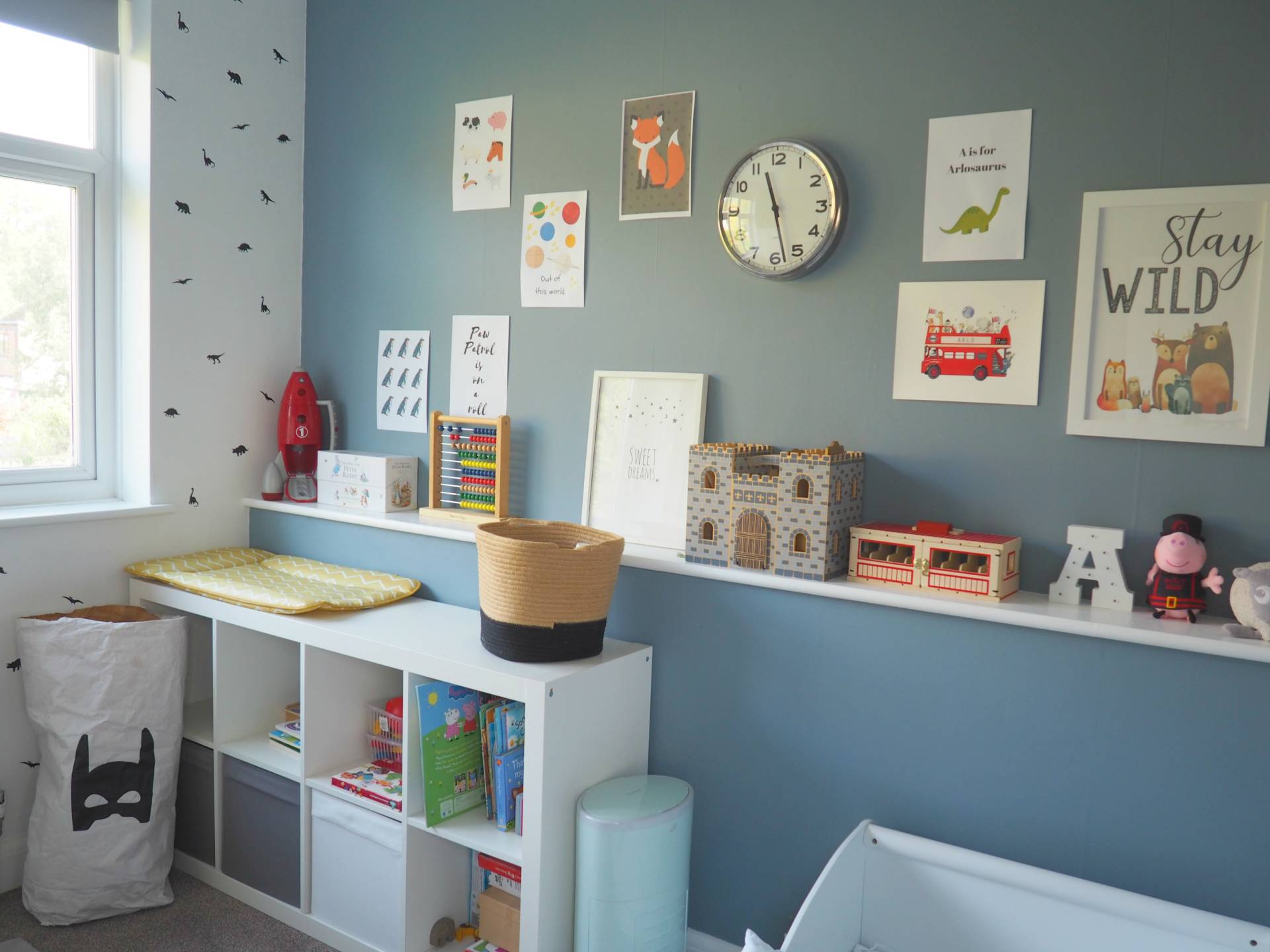 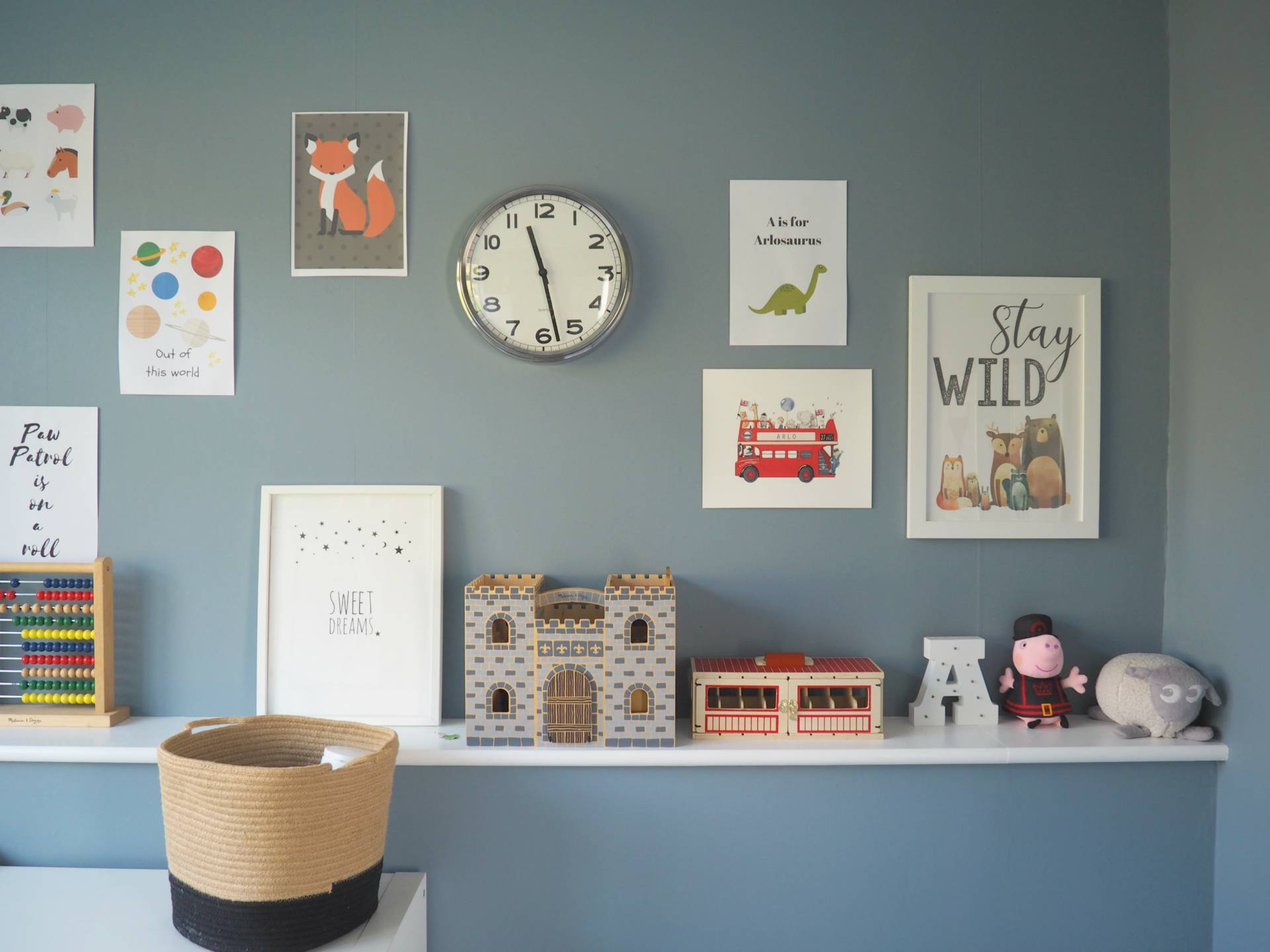 I tell you what, it isn’t half a pain to put together a gallery wall- it always costs more than you think to buy prints, frames etc! I’ve actually designed some mock-up ones here on Canva that I’ve stuck to the wall with blu tack so I can get them positioned before buying and framing the prints that I want, and then will gradually add other prints and hanging bits as-and-when I see them. As you can see, there is deliberately no ‘theme’- I wanted to include snippets of all Arlo’s favourite things (animals, farm animals, Paw Patrol and dinosaurs) and be able to easily change the prints as-and-when these interests change and develop. 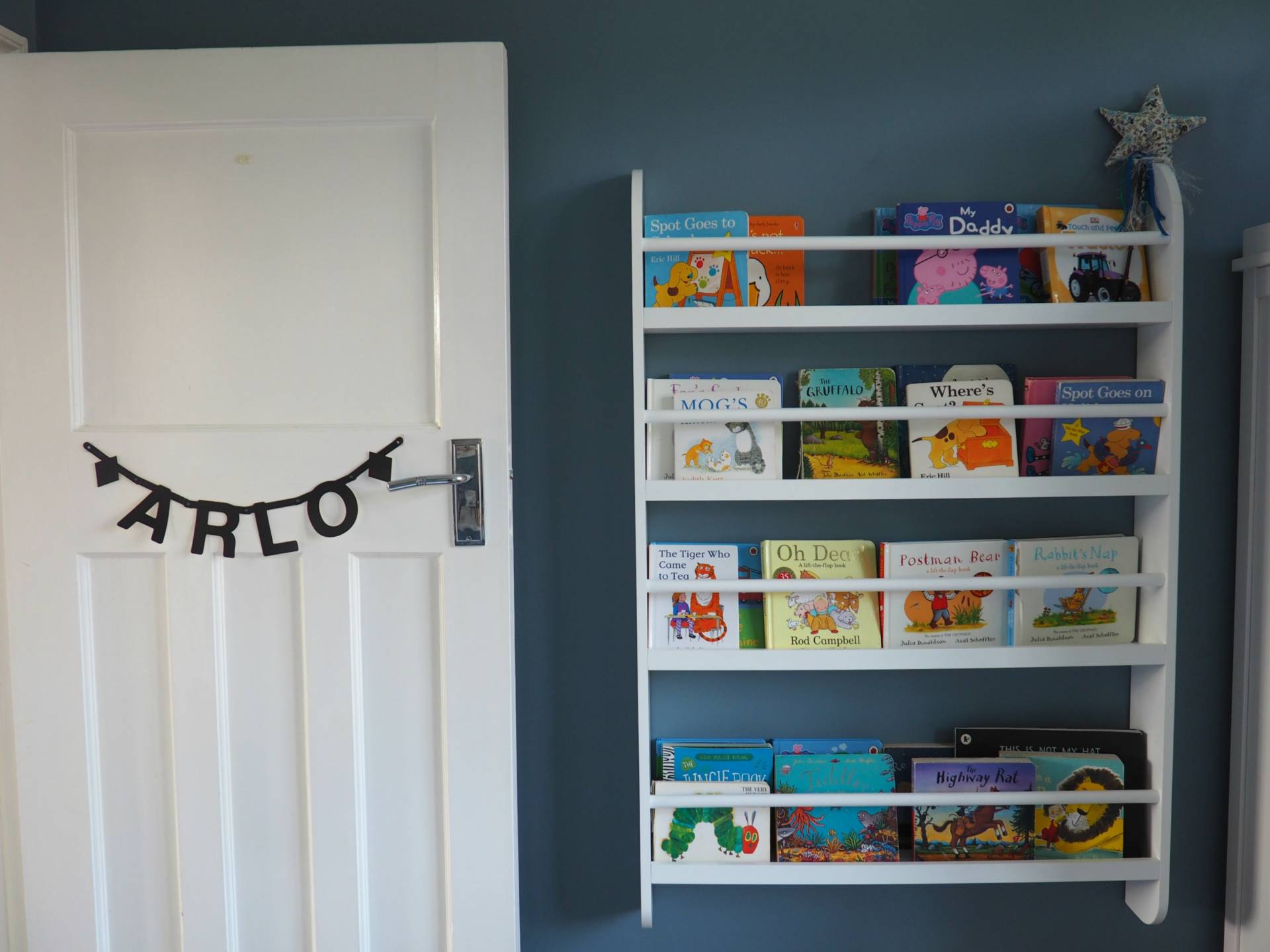 I’m also so pleased we’ve finally put up Arlo’s bookcase once again as we love this (a gift previously from Great Little Trading Co).

Freddie’s (messy!) bedroom has had shutters fitted (as with all the other rooms at the front of our house) and it’s made the world of difference to the look of it- no more scruffy looking black out blind stuck on each night! I’ll do more detailed blog posts soon of each of the boy’s rooms when they’re totally done. 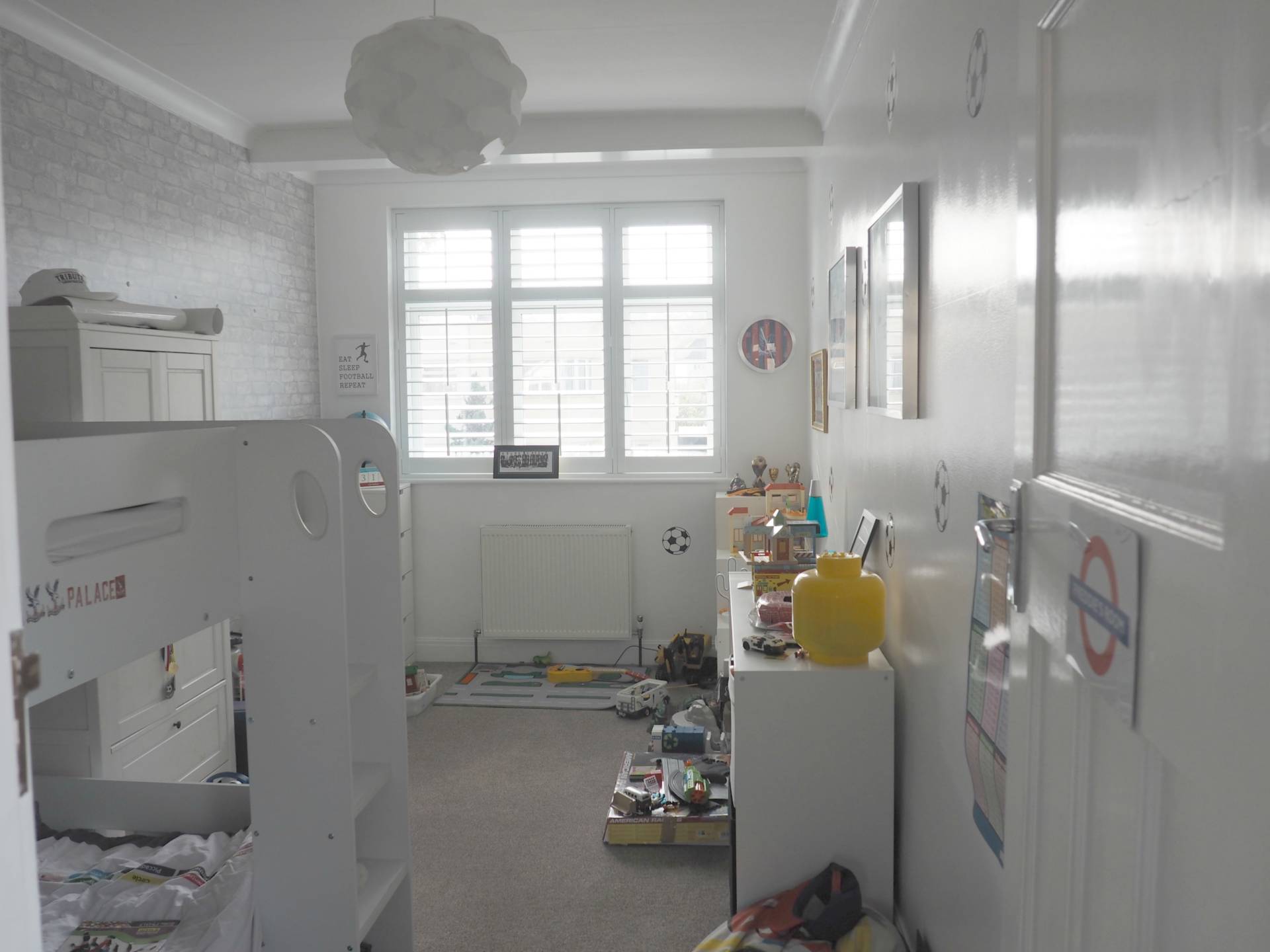 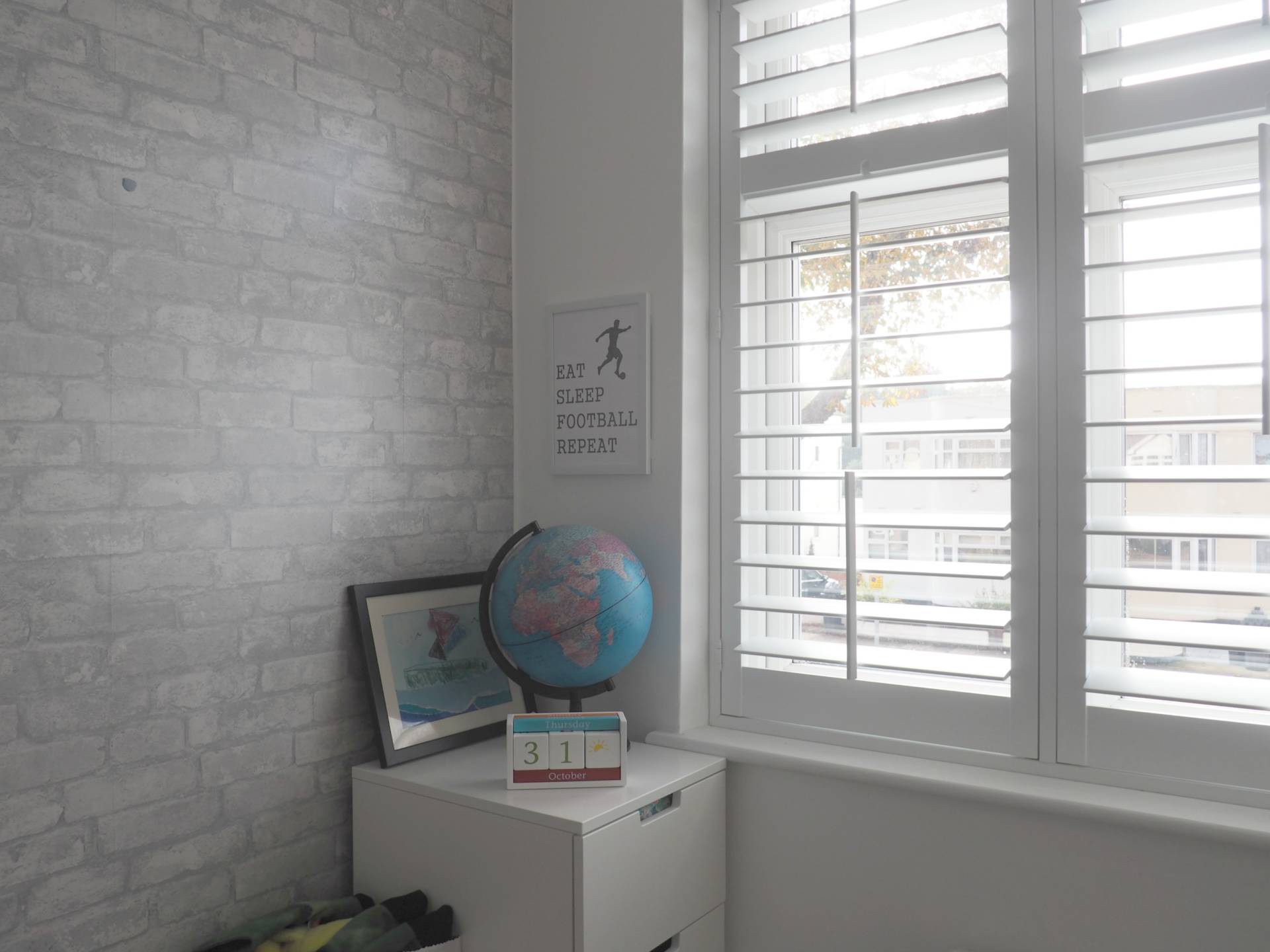 All 3 kids rooms will get new carpet too at some point, although they’re totally livable at the moment so again, that’s something we’ll do in time.

Our bedroom is 75% finished in terms of decorating. I used the same colours and styling as in our old house, which some may think boring but as we were only there for a couple of years and I really liked what we did with the room then, we have decided to keep our prints, shelves, dressing table etc. It’s such a waste otherwise. The only thing I’m annoyed about is that on the main wall where the dressing table is I used Dulux Warm Pewter in silk/satin(?) and it looks quite shiny which is bugging me- I wished I’d used matt now, so it might be a repaint job when I can be bothered. Thankfully I used matt Dulux ‘Monument Grey’ on the other walls. 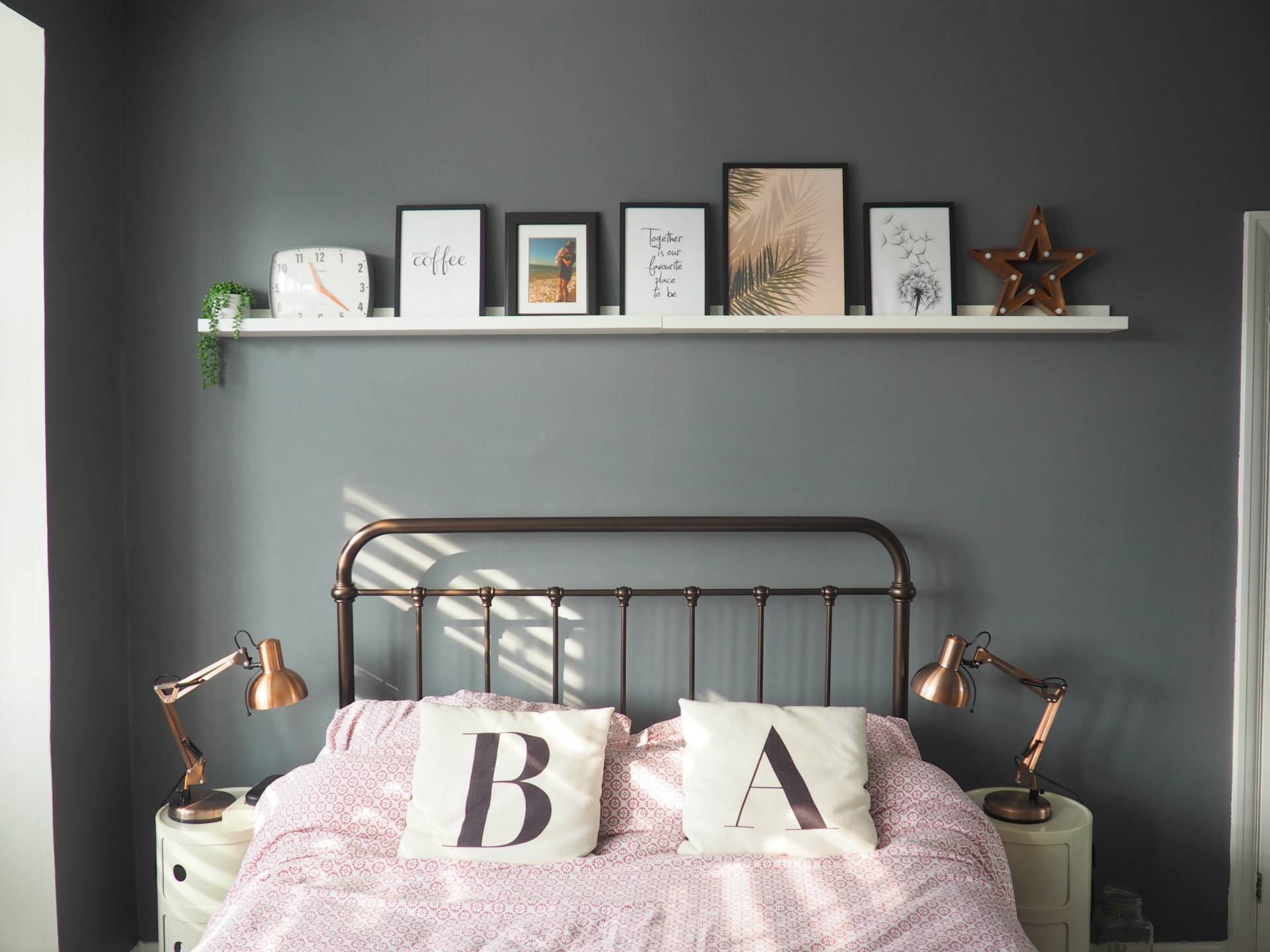 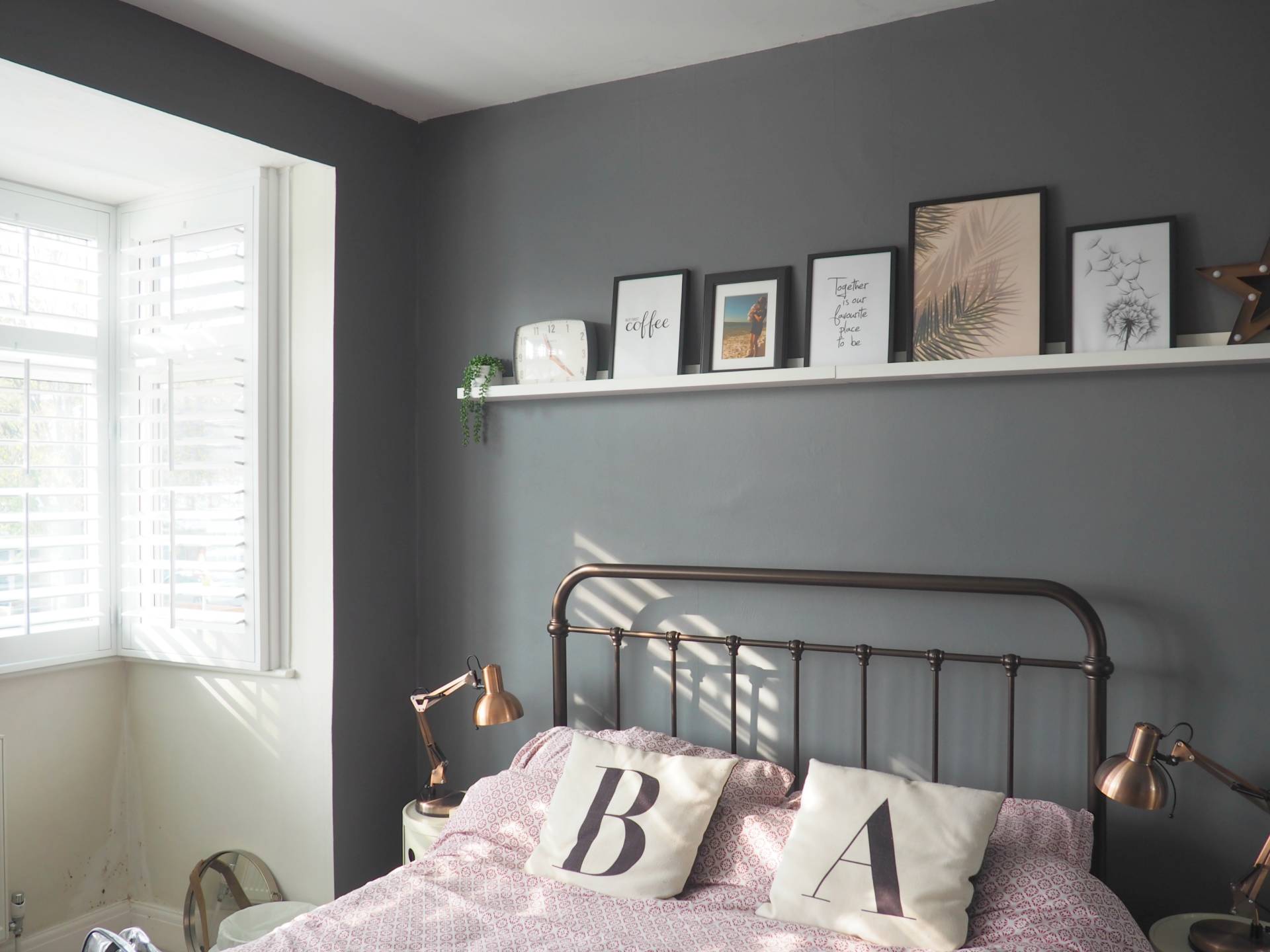 I upcycled Ikea Pax wardrobes using the same colour grey, and have been pleased with the overall effect. They’re not perfect, but we couldn’t justify the cost of built in wardrobes at the moment, and I couldn’t find ANY tall, double hanging dark grey wardobes anywhere online. We had an electrician come and centralise the main light in the room, plus fit a hidden TV socket on the wall so we could put a TV there (we’re using our old kitchen one at the moment until we can get another, more slimline one). 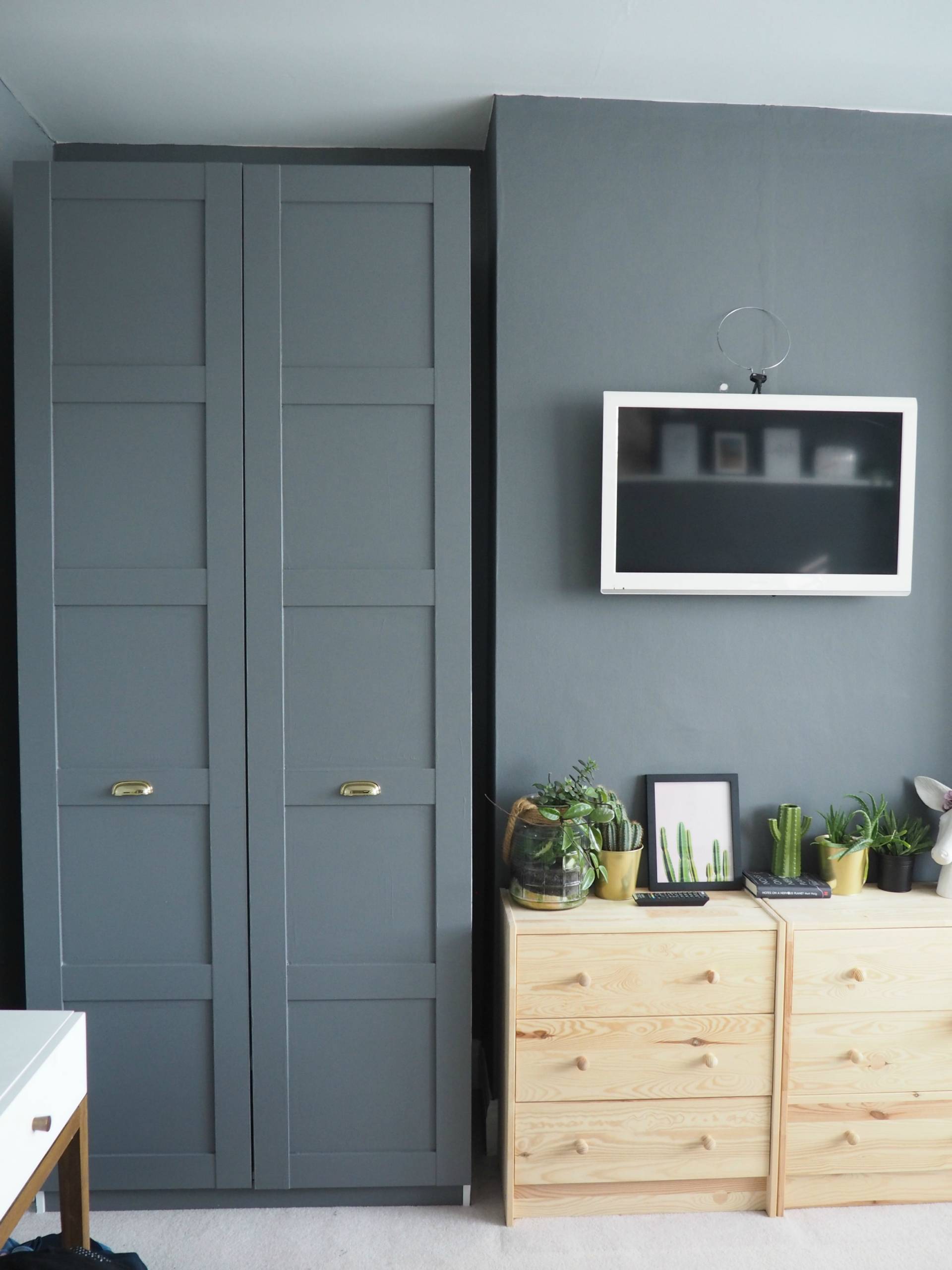 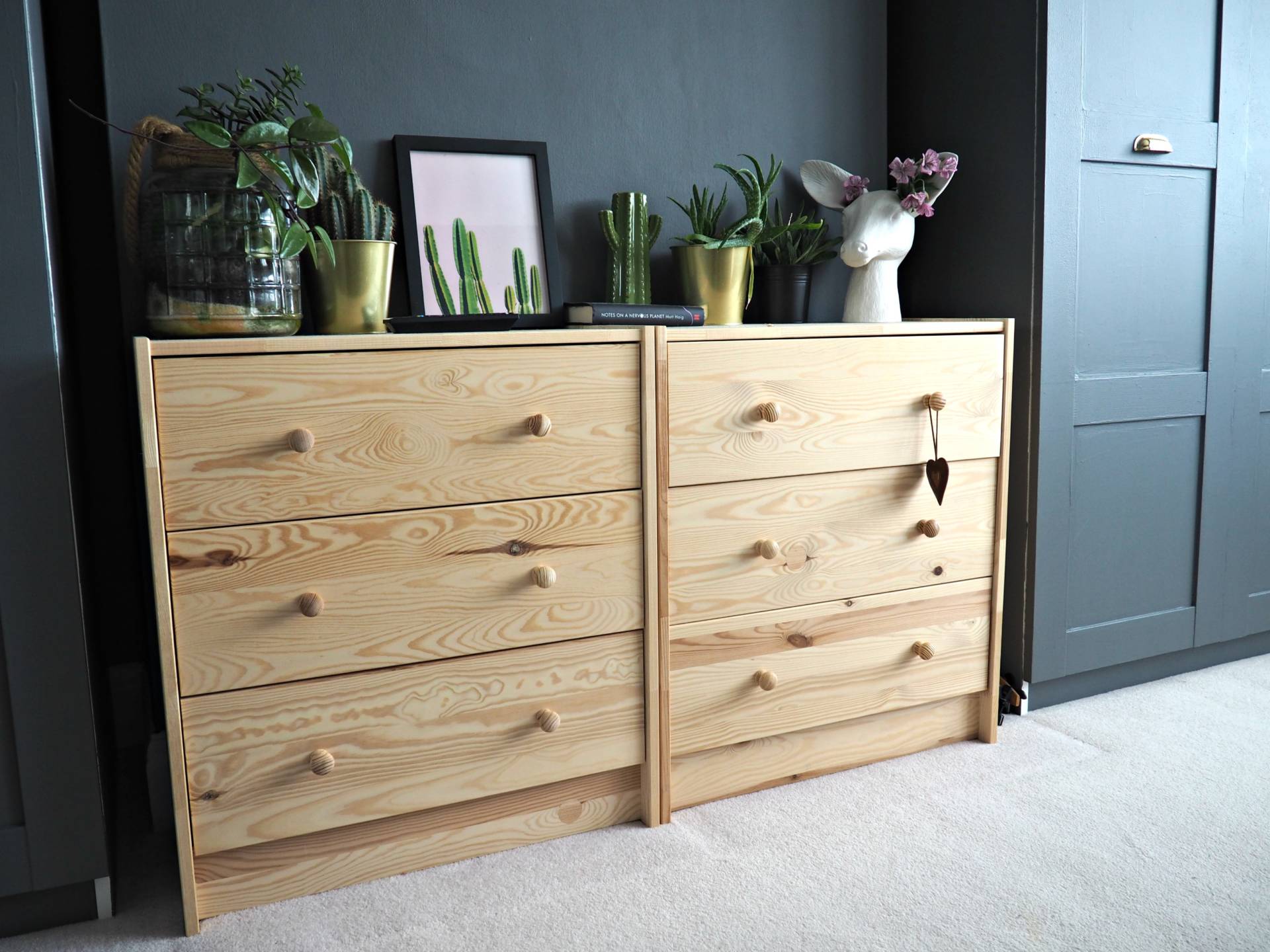 The main jobs left to do for the time being are new carpet in our bedroom, and then change the radiator in the alcove and finishing off painting there, as well as the white woodwork in the rest of the room. We’ve discovered a bit of a damp problem in the corners of the alcove, as mold is starting to grow there (we suspected a previous problem as we could see where they had been painted to cover something up), so we need to look into this and also find out if it needs sorting and if we need to use a special paint first.

I also want to put another picture ledge above the dressing table ala our last house to put some prints on, and the the room will be finished! 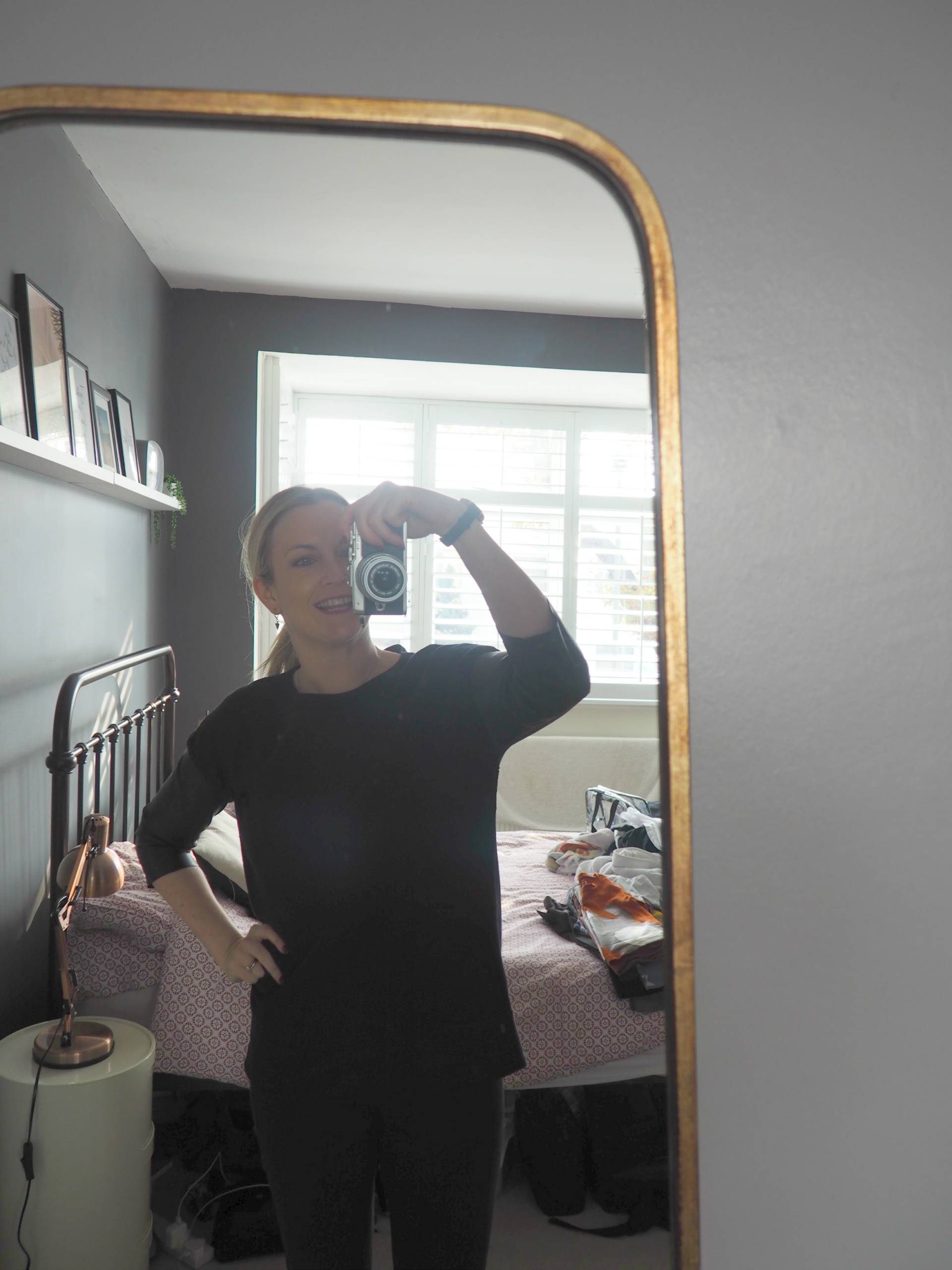 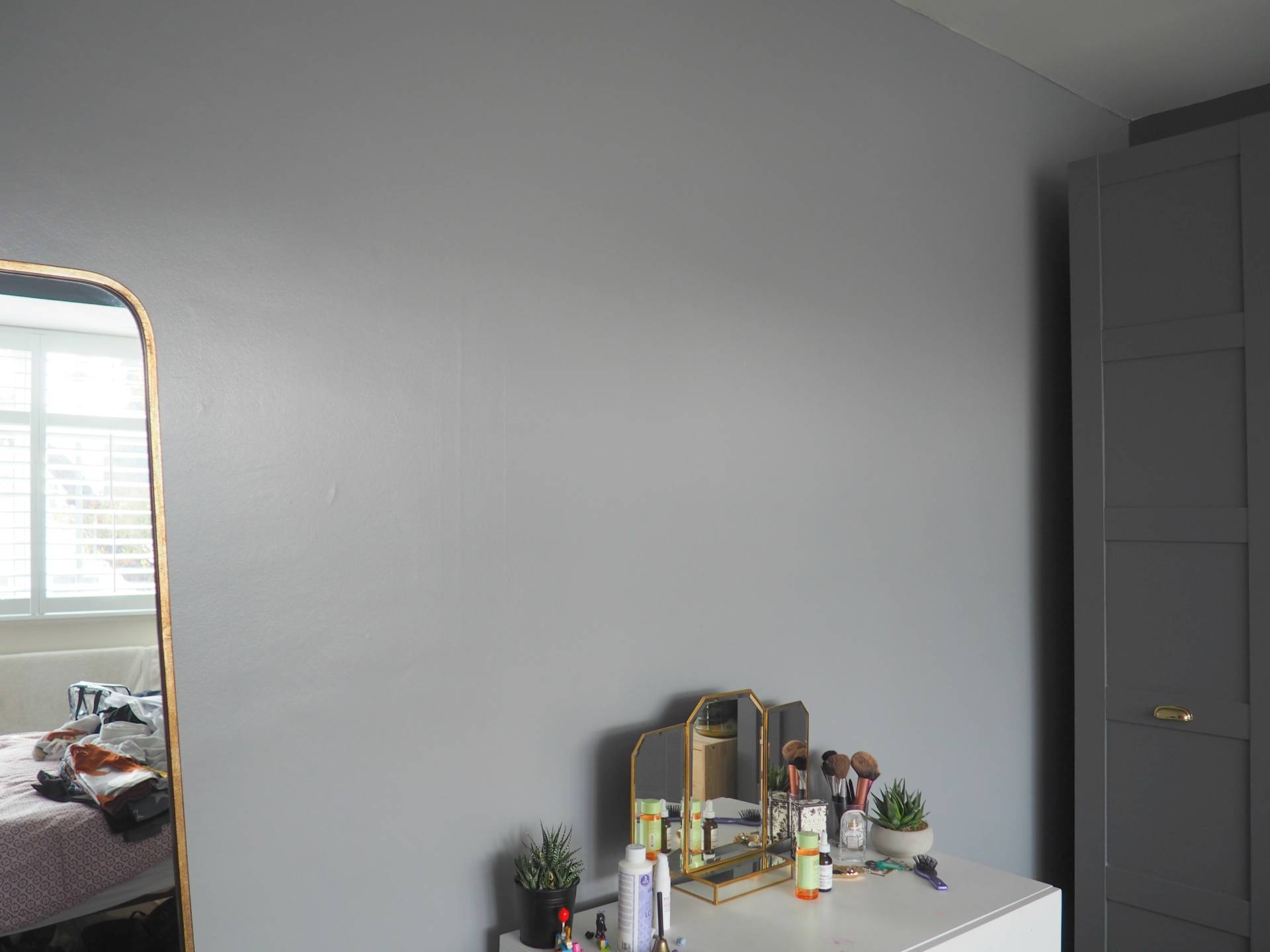 Like Freddie’s room, the new shutters have been a game-changer to the look and feel of our bedroom- they weren’t cheap but we’re so pleased with them. 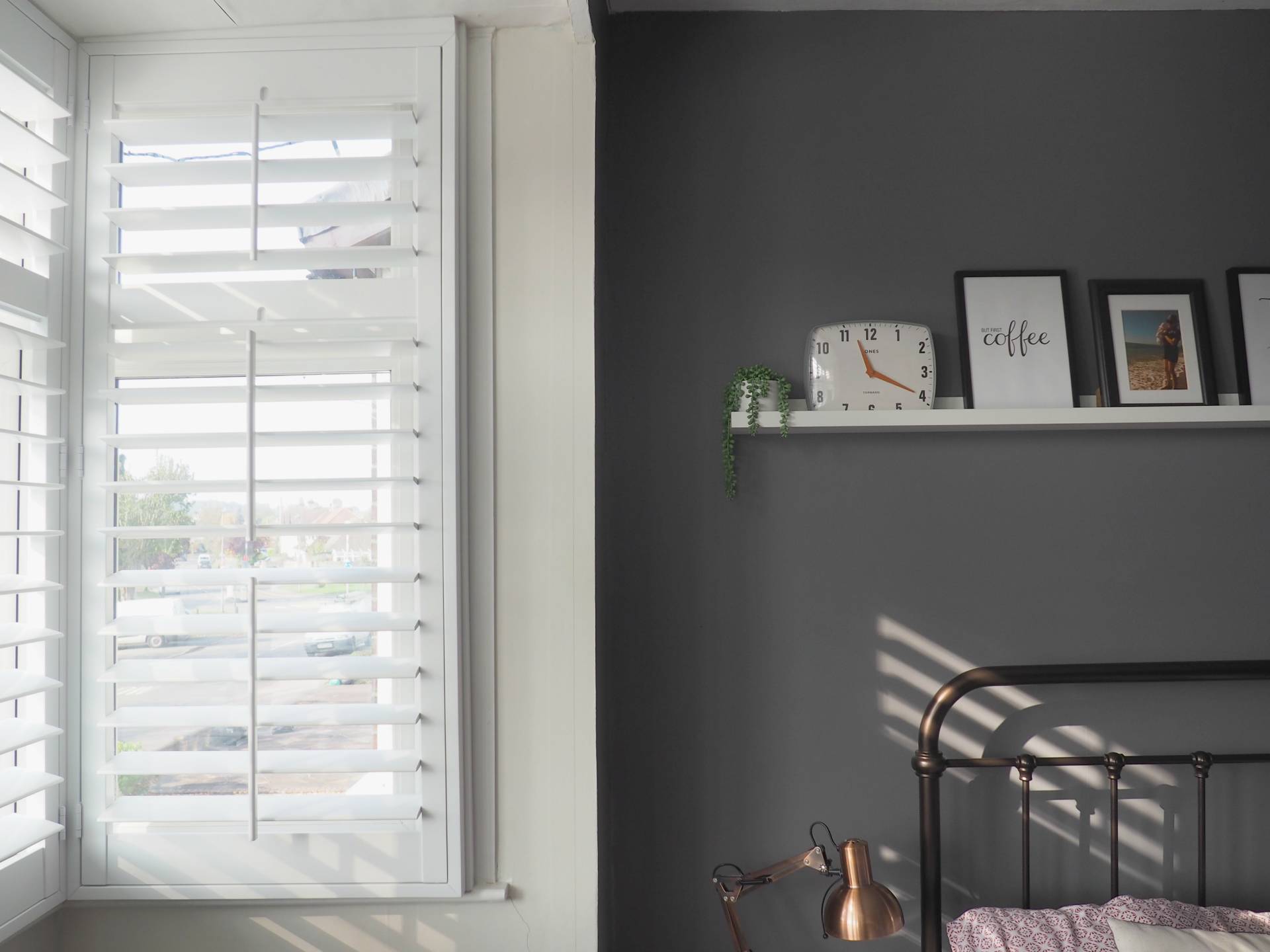 This dumping ground has largely been untouched apart from fitting the shutters, and whilst I didn’t see decorating this as being a big priority, having lived here a while now and because I work from home, I’ve decided that I’d really like this space finished ASAP so that it’s a nice place to work. Especially since we have a lovely desk and storage unit. The wallpaper is grim though and properly stuck on with a ‘protruding’ pattern on it, so unfortunately I think we’re going to have to pay a proper decorator to come in and sort this out, as neither Adam or I have got the time to start scraping away at this! There’s one thing painting, but another spending forever removing ancient wallpaper. I’m also debating doing what we did in our old-old house and sand and paint the floorboards white underneath the carpet. Plus we will install a new radiator. 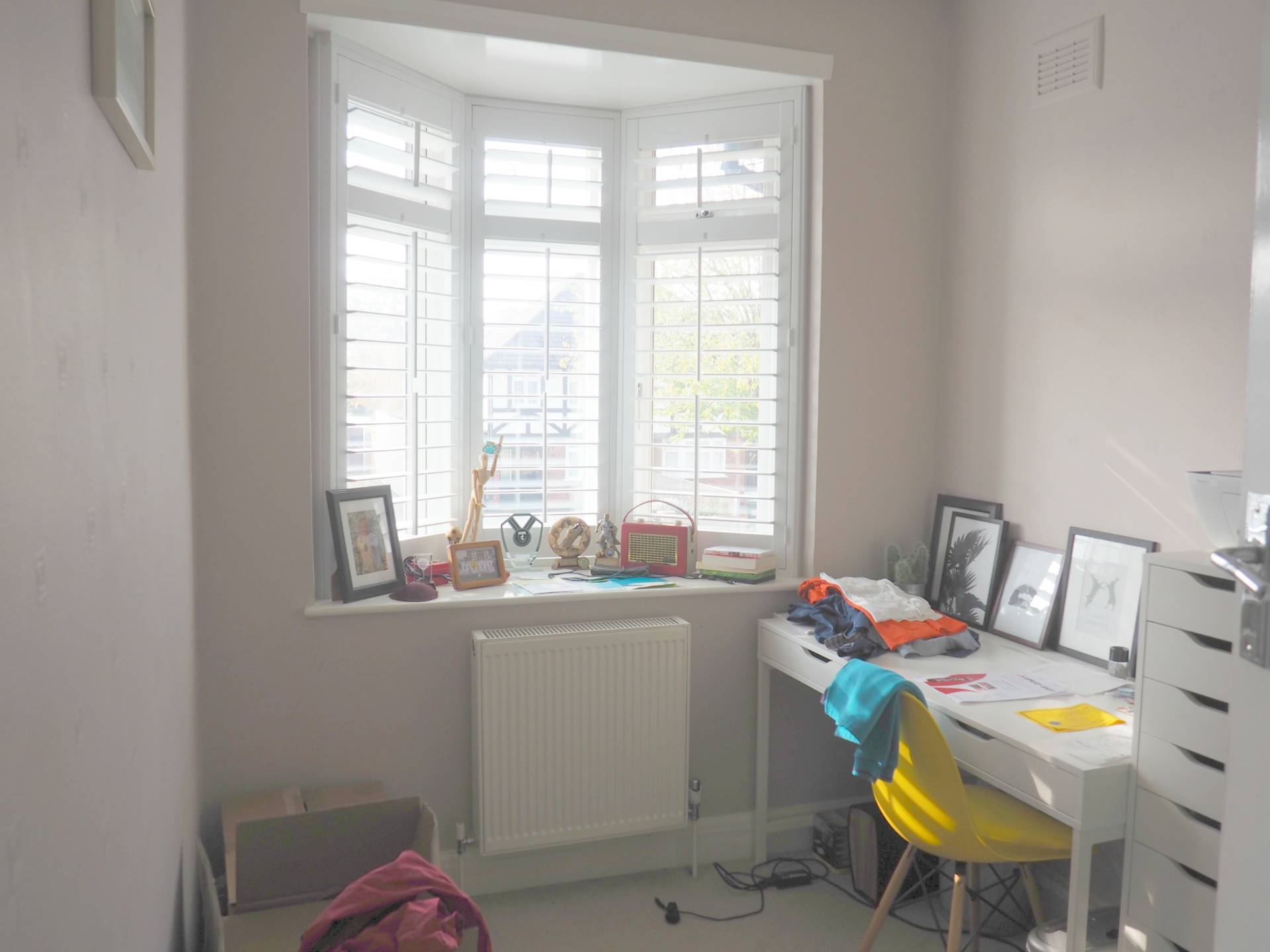 One thing I am loving in here is my new linen cupboard from IKEA! #Saddo It’s so nice to have a proper place to store all of our towels and linen, after having them shoved in wardrobes for the past few years! The pictures won’t stay on there I don’t think- they’re just there until they can go on walls or in other places. 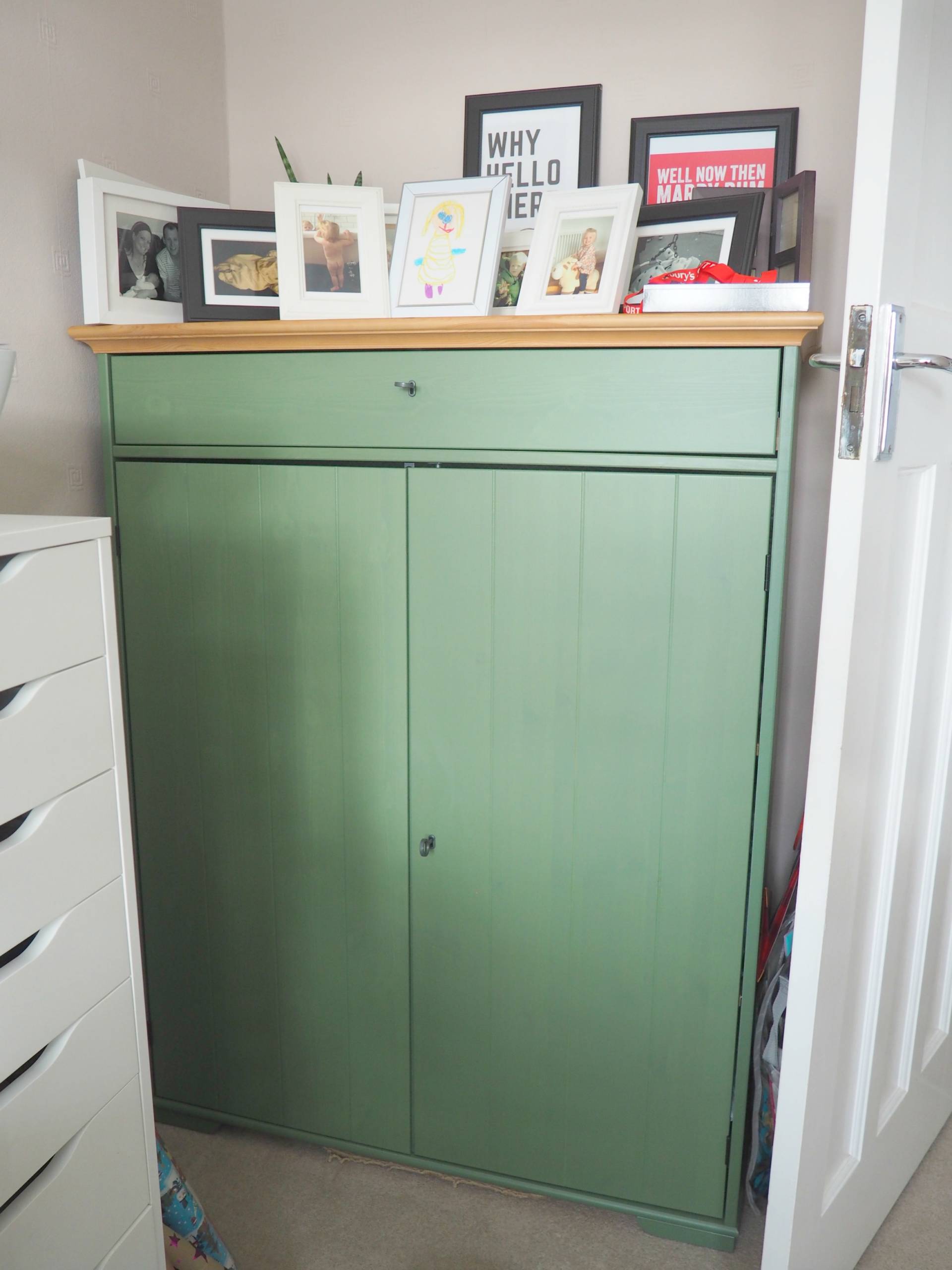 This is the one room upstairs that will be a BIG job. Whilst the bathroom decor is perfectly okay (although not to our tastes), the layout is REALLY annoying. As you can see from the photos, we have a shower which is separate to the rest of the bathroom. 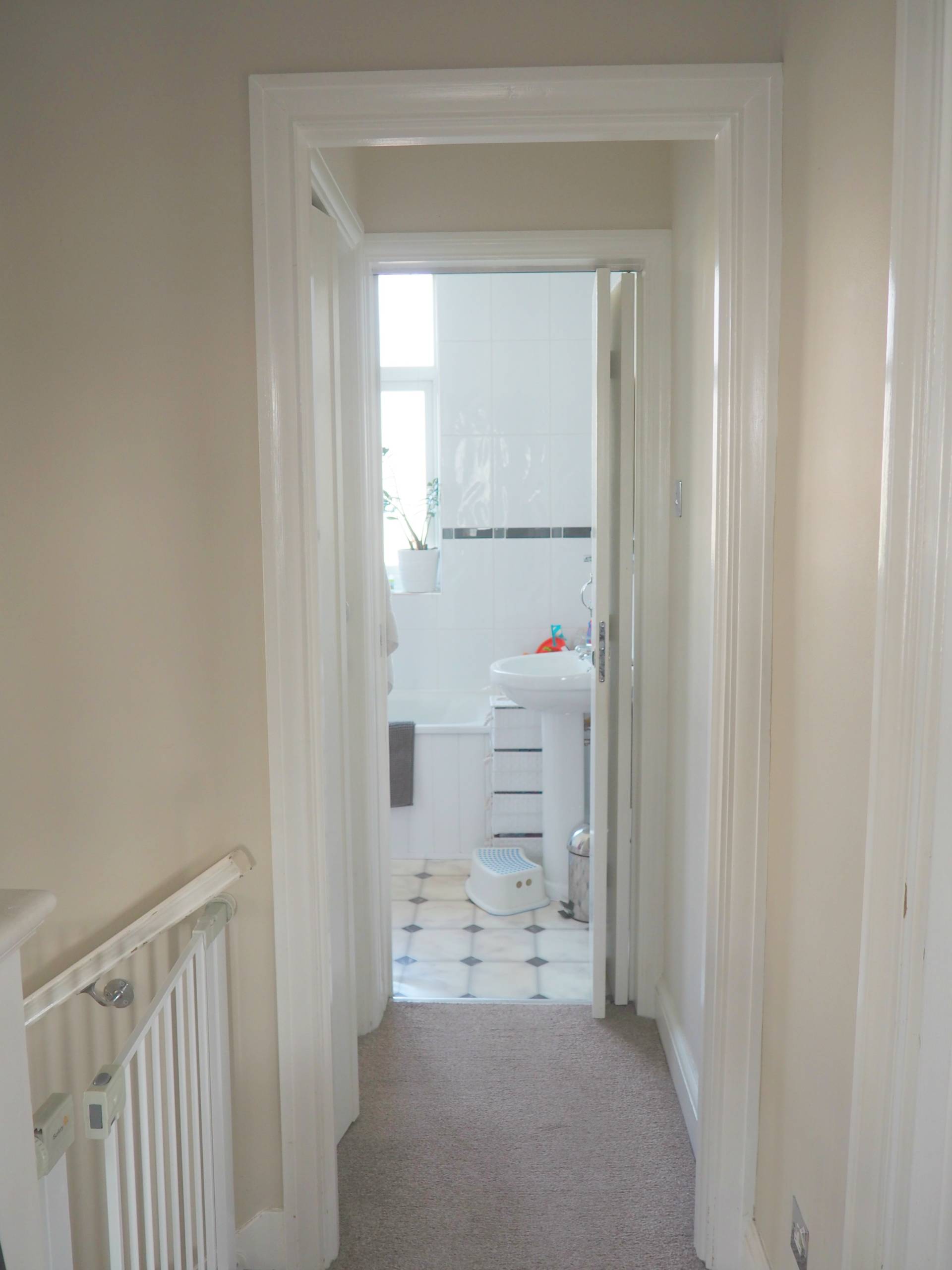 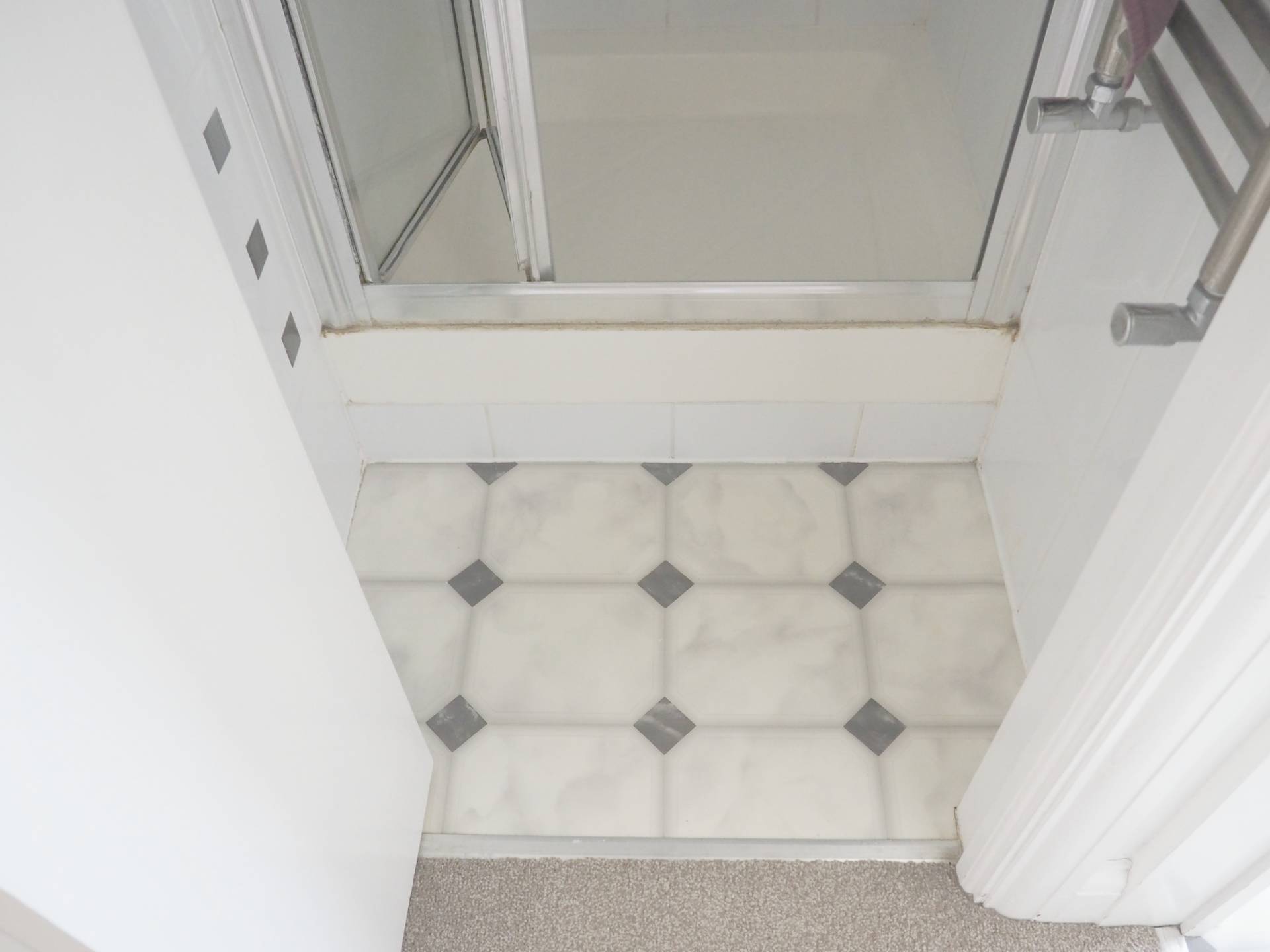 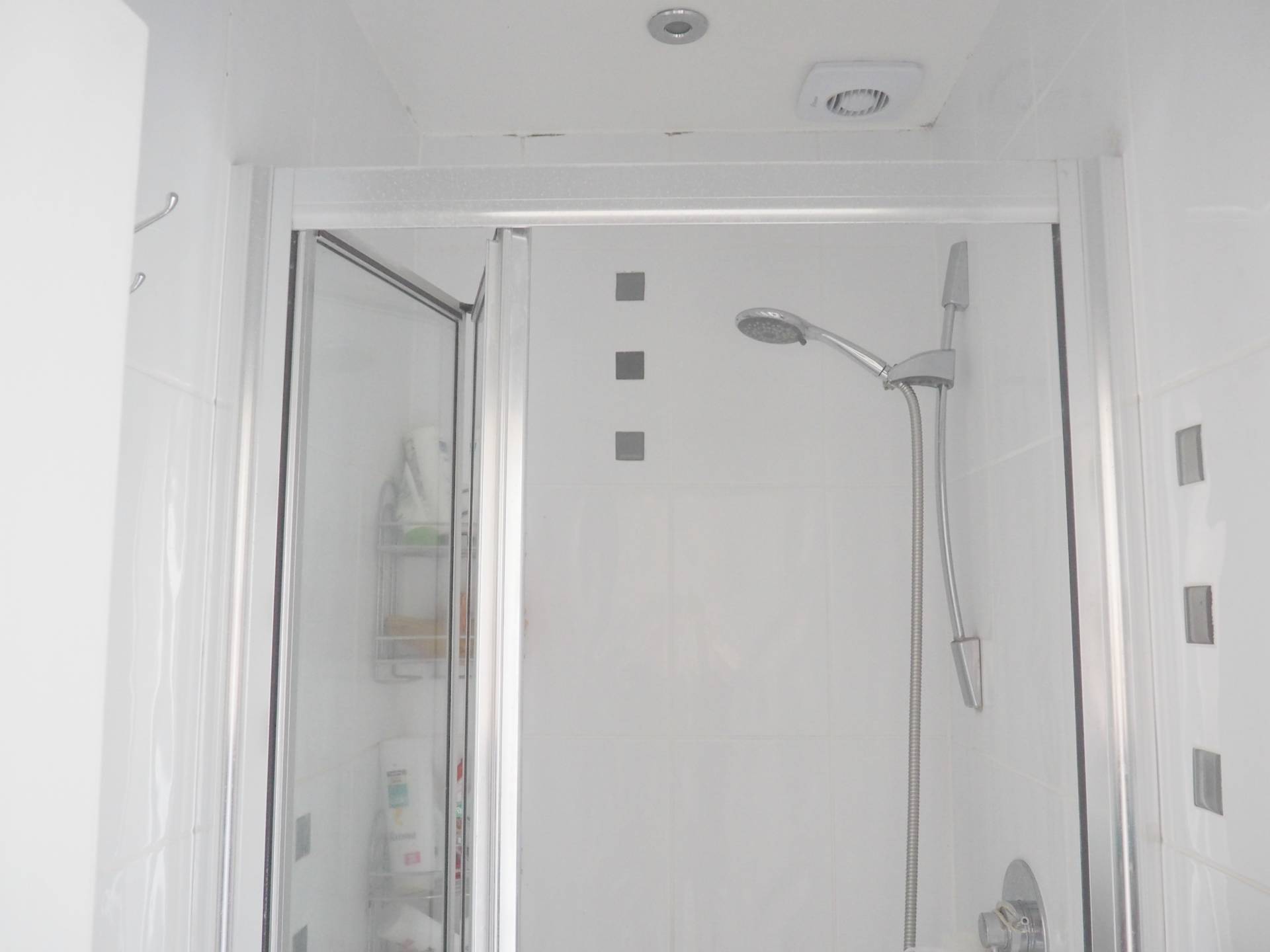 This in theory is great, but I can’t stand the folding doors to each area (it feels like a coffin when you have a shower!), and the small stud wall which has two (not working) towel rails on either side just really gets in the way and makes each space feel cramped, in what would otherwise be a big bathroom. So we want to take down this wall to make one big bathroom again (keeping a new, but still, separate shower), ditch the folding doors and put a normal door back on the original doorway, and then totally renovate the bathroom. 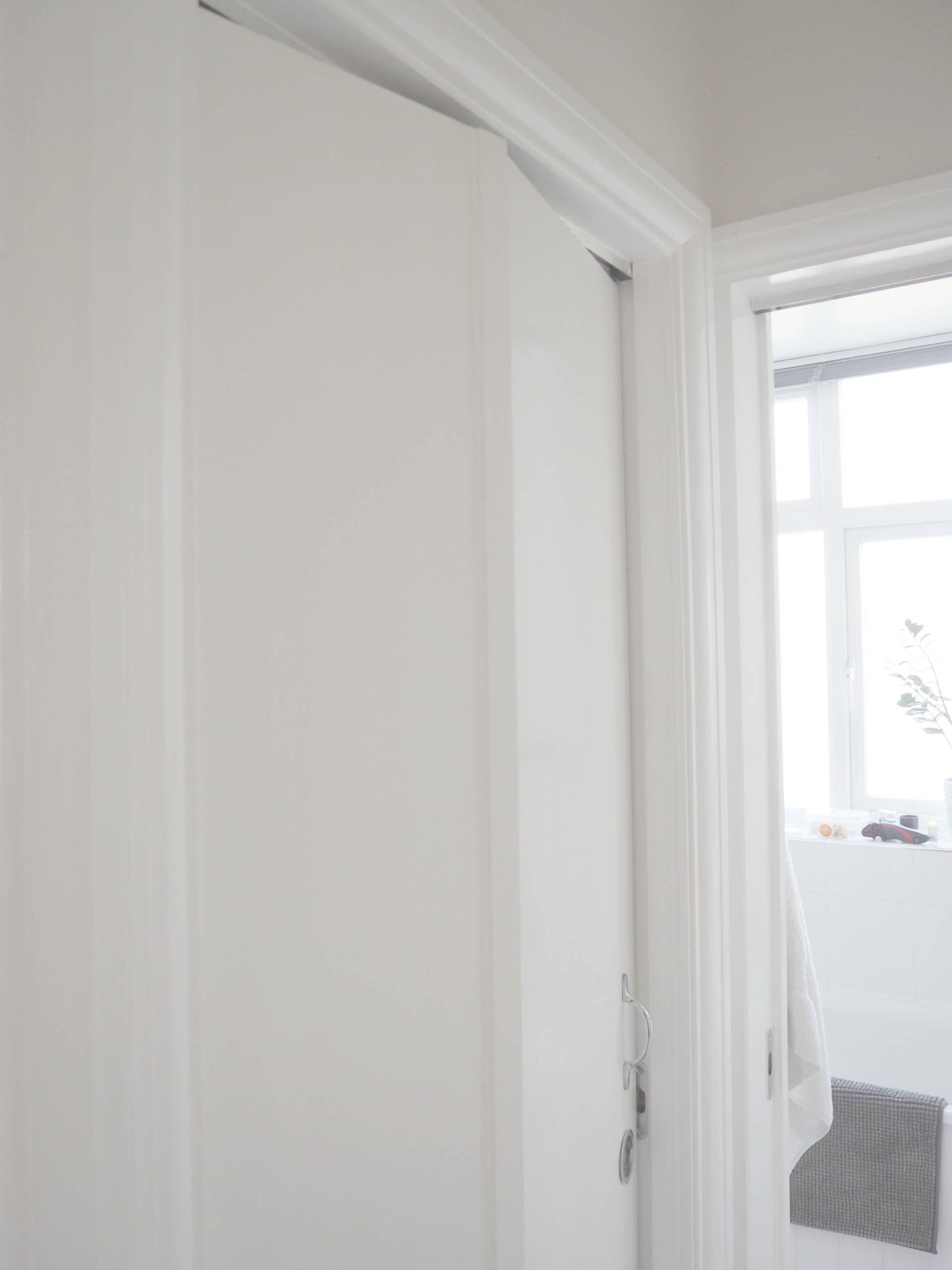 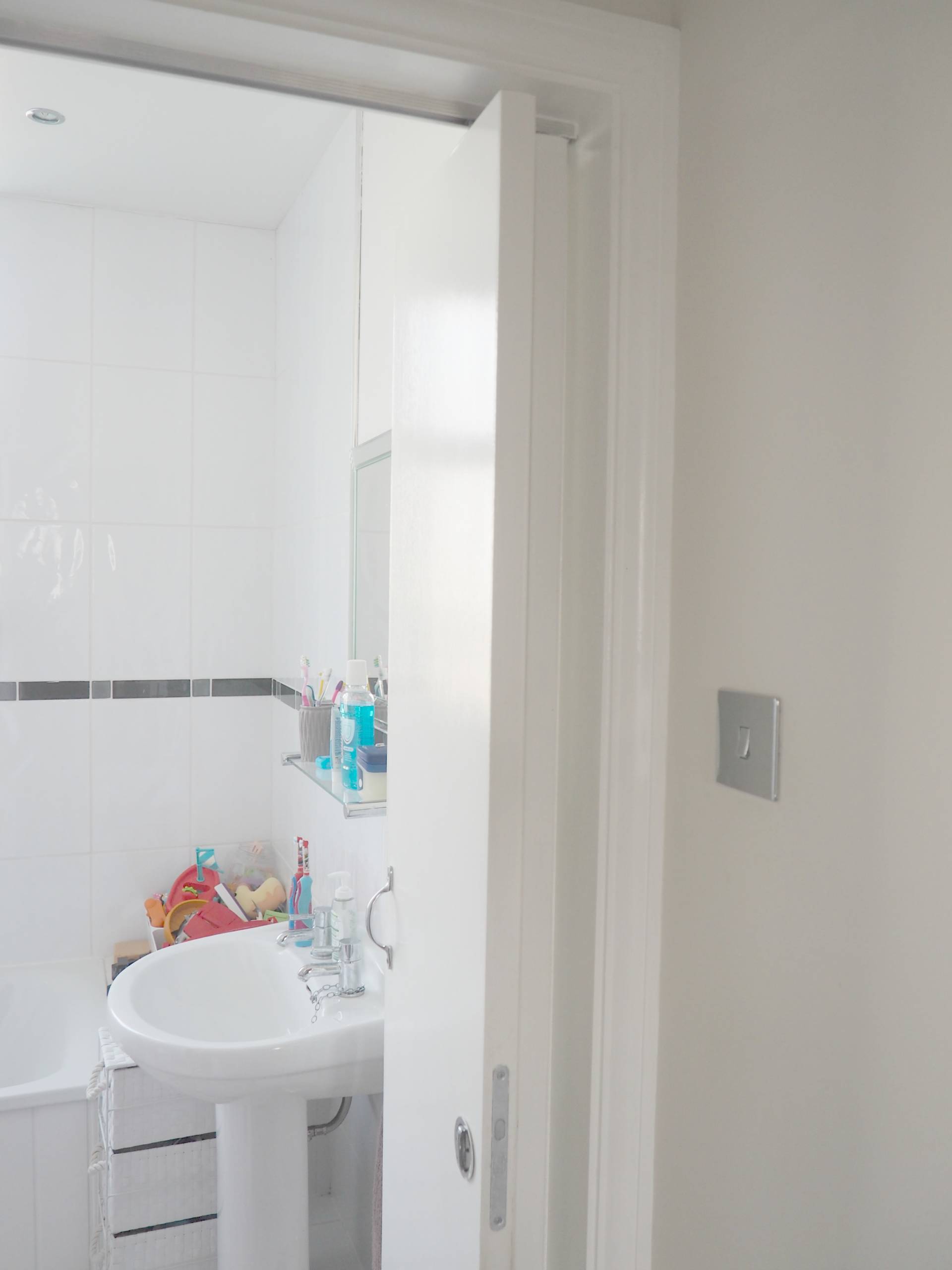 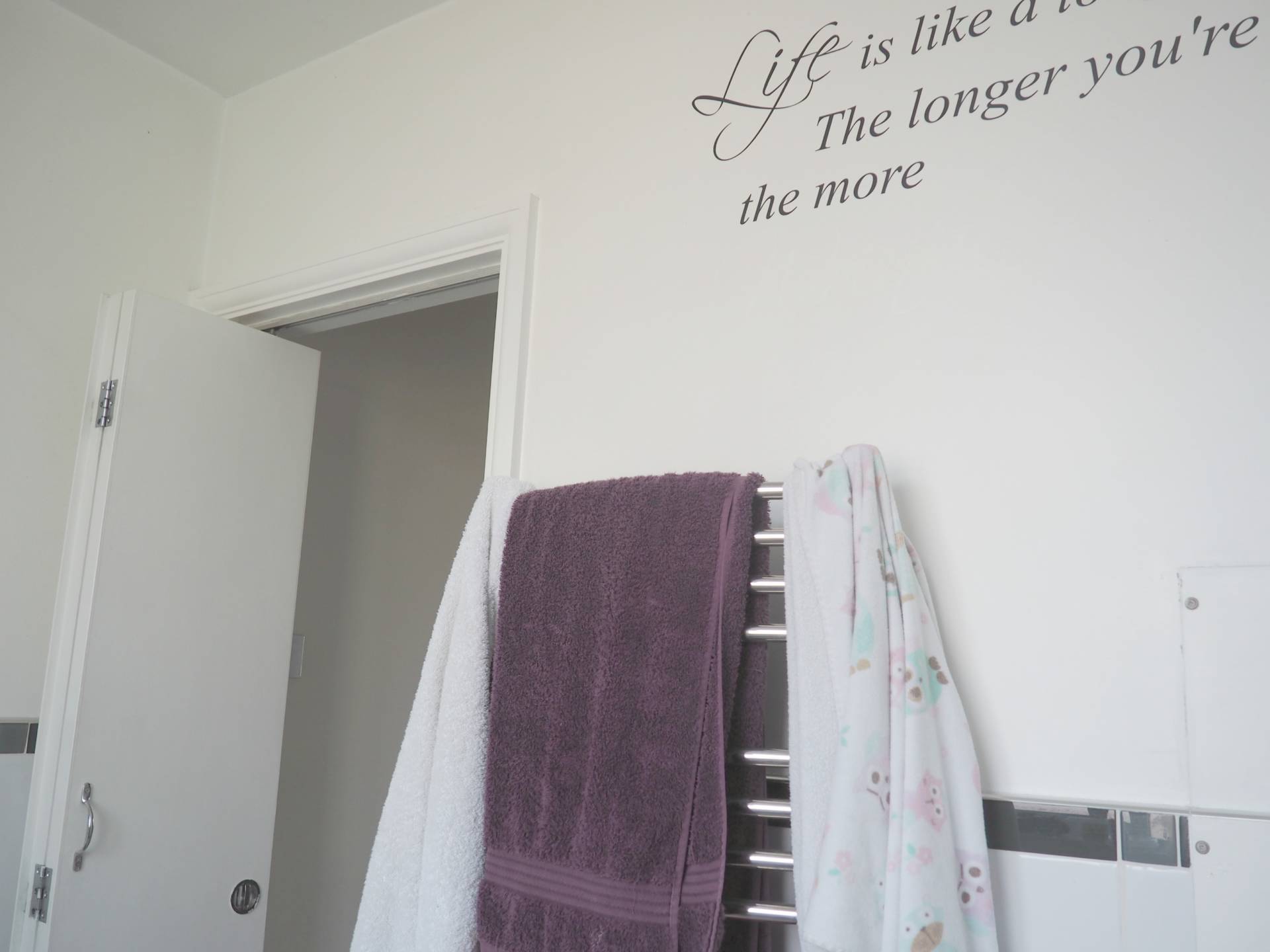 I’m not sure when we’ll get to do this because of cost, but I know that once it’s done it will be such a nice space (at the moment I don’t really like to linger!). The windows are HUGE and let so much light in, and the area where the bath in is really big too so I know that for once we’ll be able to have a lovely big bath, something that we’ve never had, as even when we’ve renovated the previous two houses’ bathrooms they’ve always had to be quite small due to the floor plan of each one. There is also zero room for any decent storage, so that is something we’d like to fix when we re-do it. 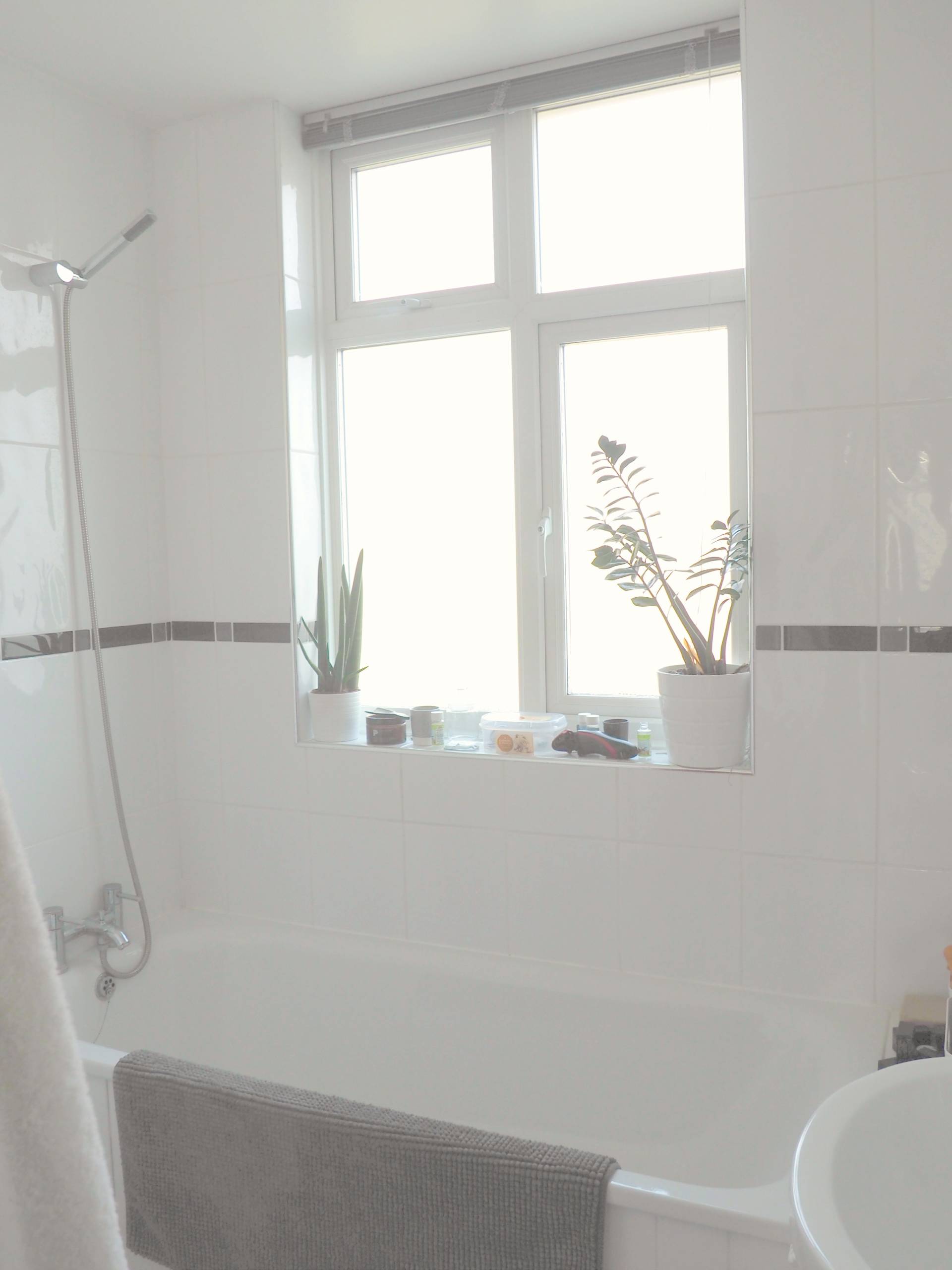 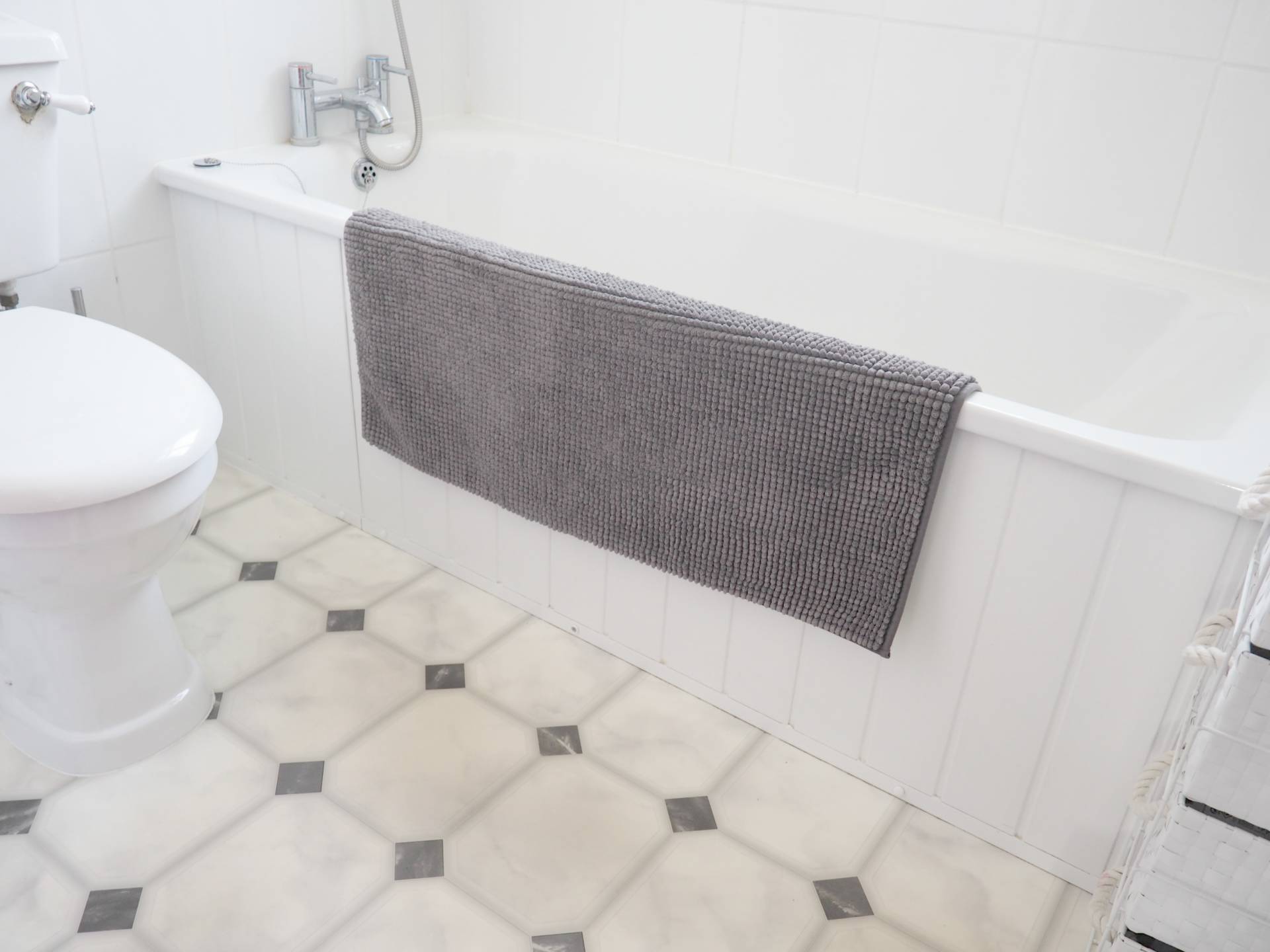 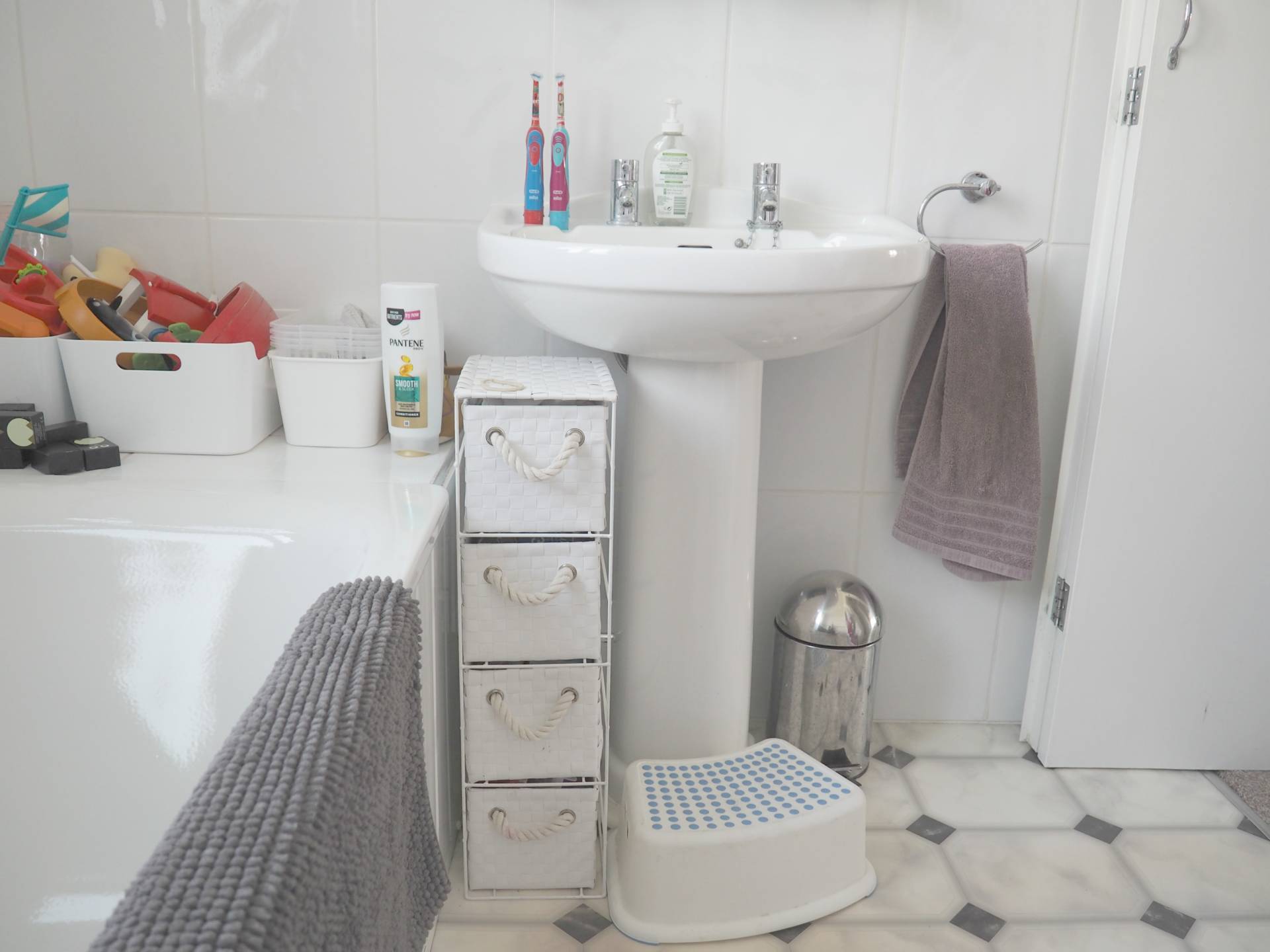 So that’s our upstairs so far and plans that are coming together. As I said earlier, it’s been nice to actually live in the house and get used to how we use it so we can then prioritise.

In the next blog post I’ll show you downstairs, what we’ve done in the living room, and the ‘big plans’ for the rest of it!