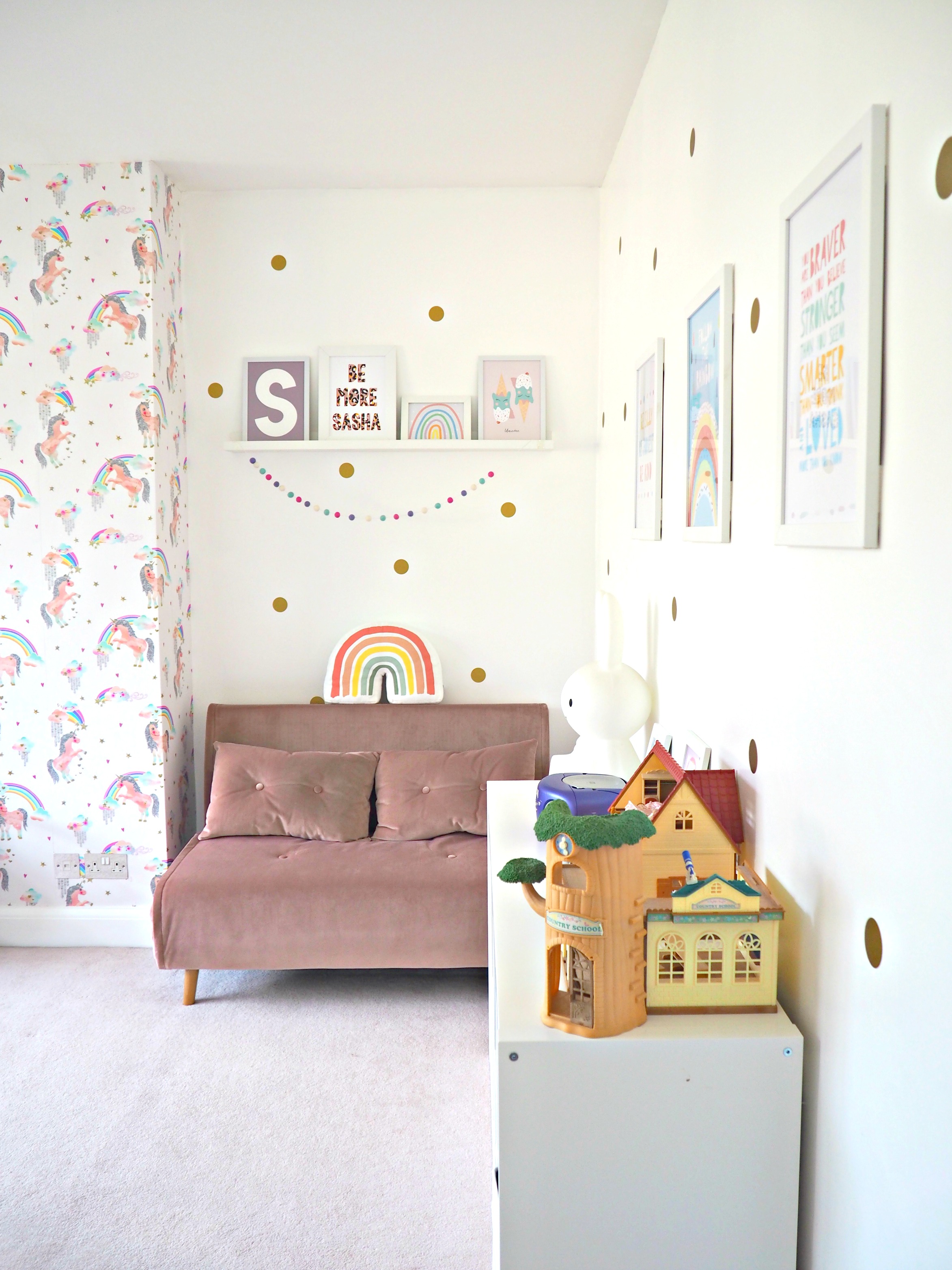 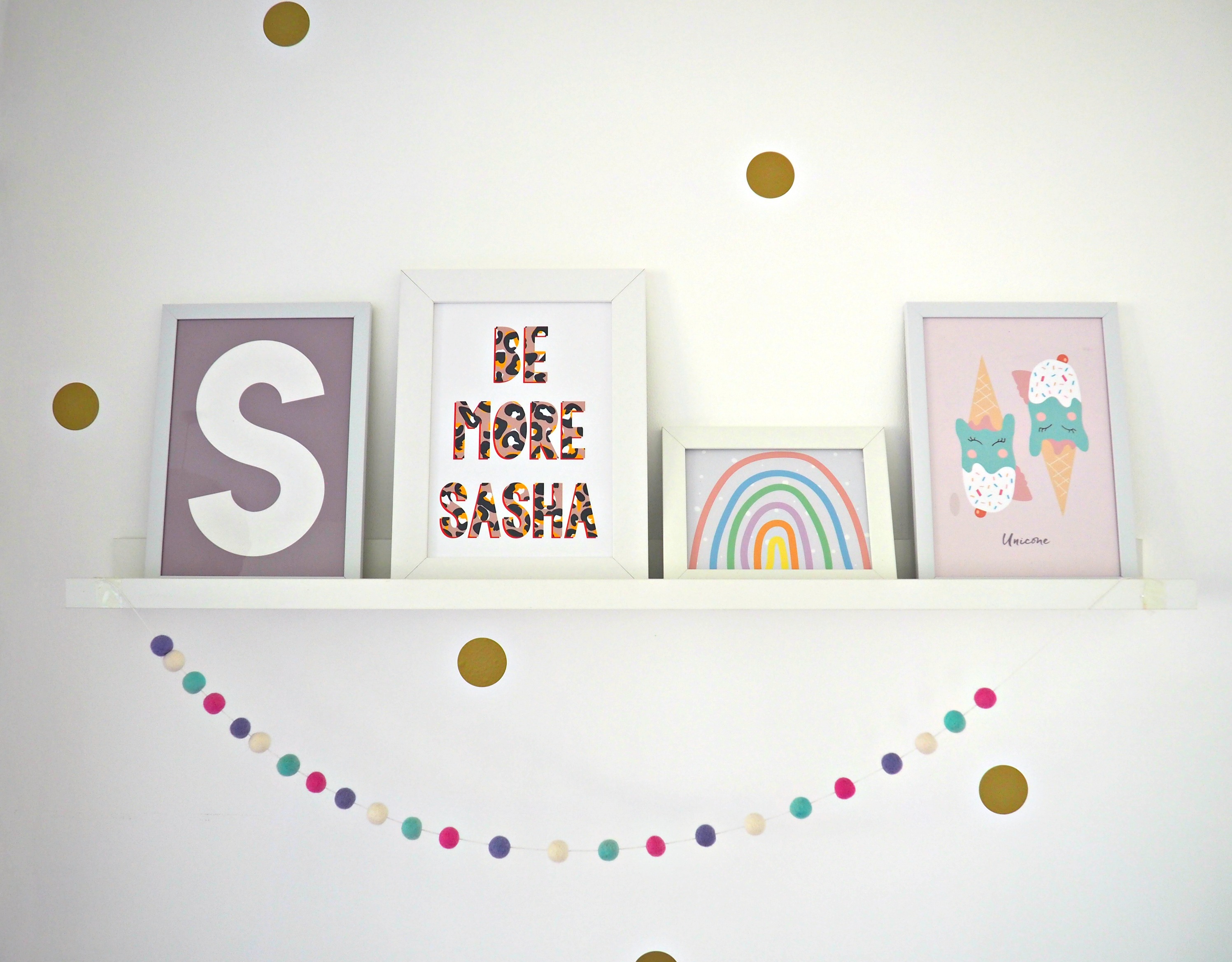 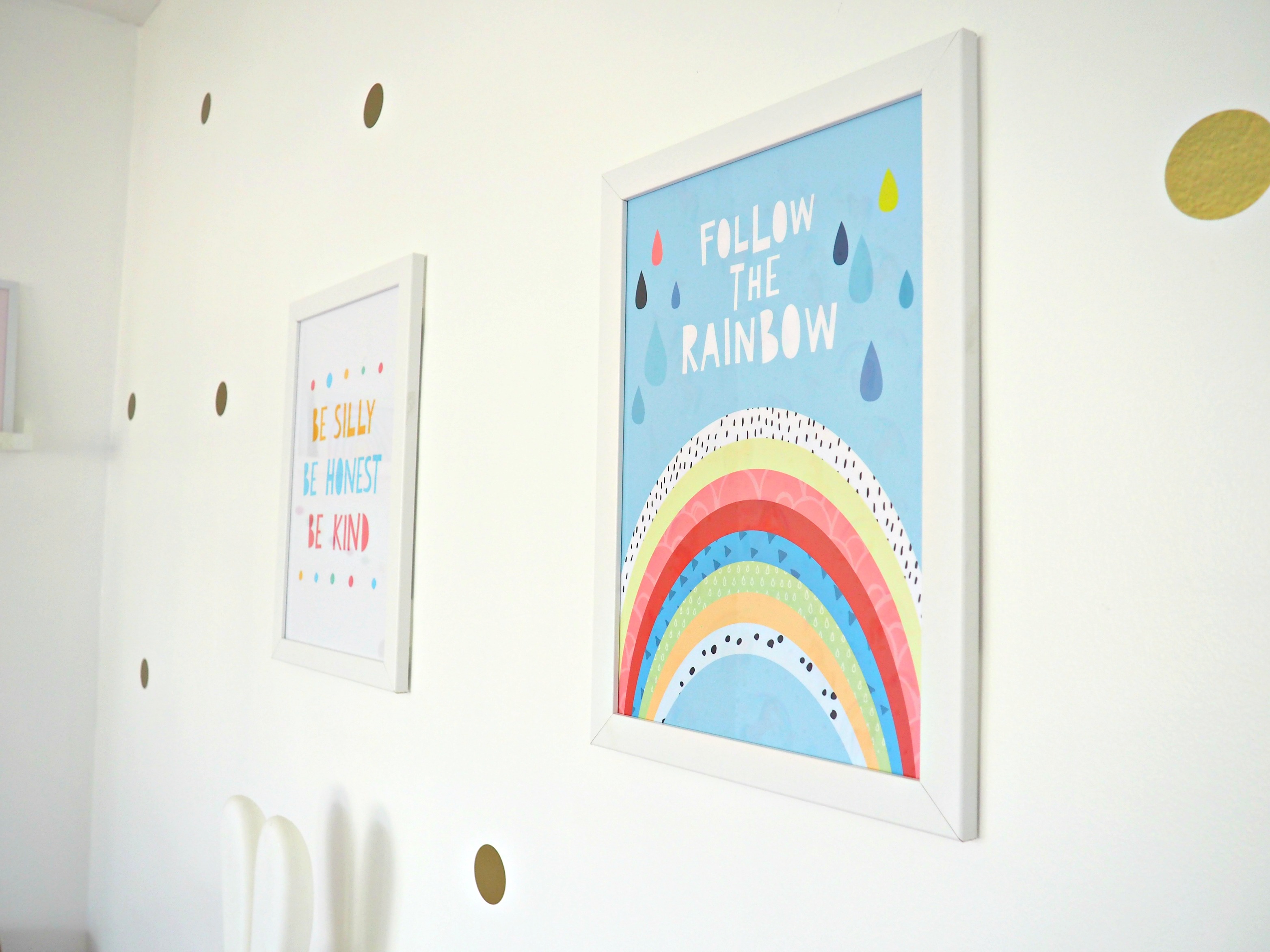 I’ve been so excited to write this blog post! Two months after moving in to our new home, we have one room in the house that is totally finished, and that’s Sasha’s unicorn and rainbow-themed room at her request. Freddie’s isn’t far behind, so I’m hoping I’ll have a post for that coming very soon once I get a chance to take some proper pictures.

First, before I show you some more pictures of what we’ve managed to achieve, I should really show you the ‘before’ photos. Now, decor-wise, her room could’ve been much worse in terms of the ease in which it took to redecorate. There was no horrible, tough wood chip wallpaper on the walls, and the bit of wallpaper that was there on the chimney breast peeled off with relative ease. It was just, well, really dull and uninspiring, with lots of beige and black, plus a rather naff Harry Potter sticker quote on one wall. Now I love HP, but… 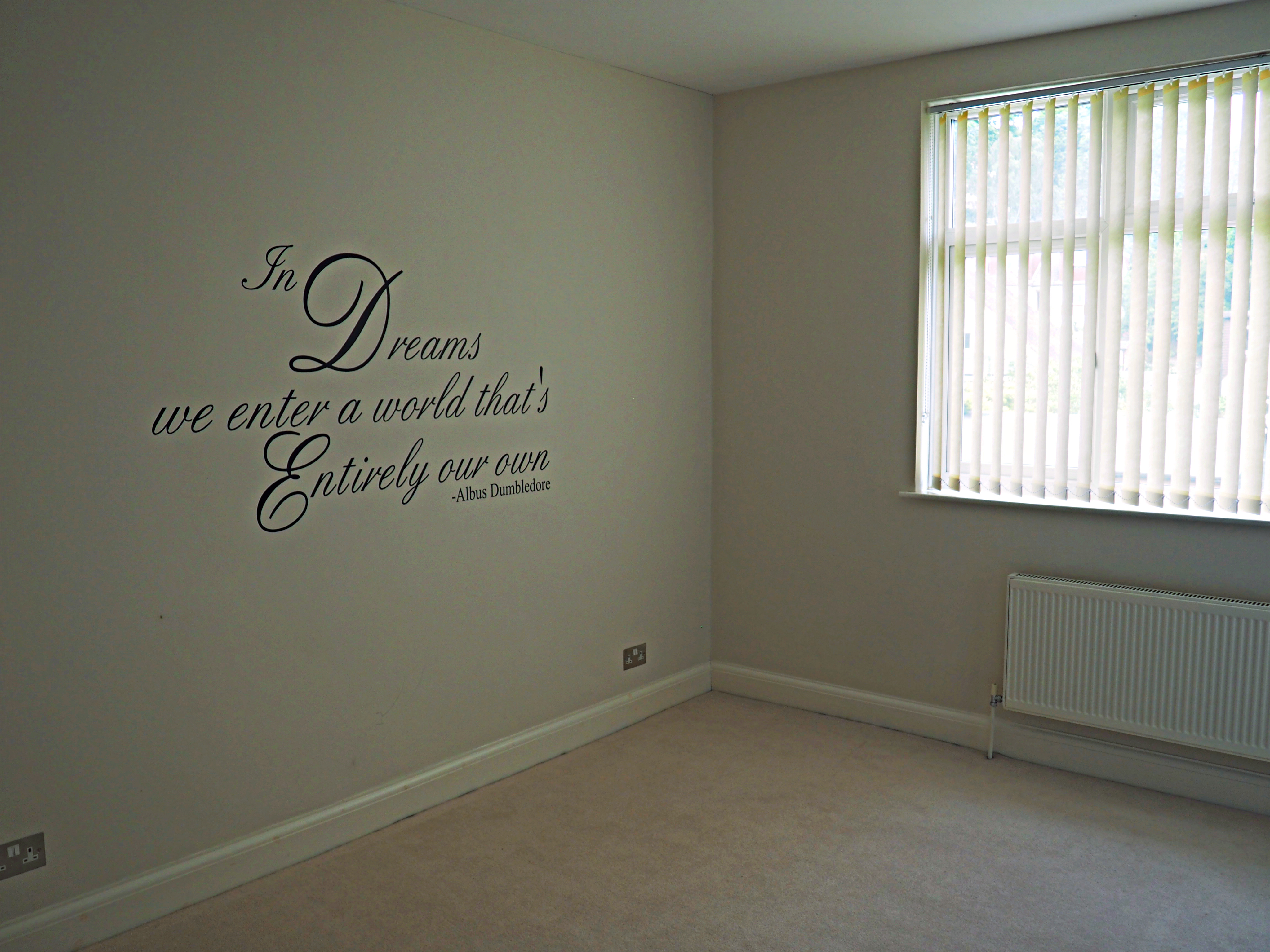 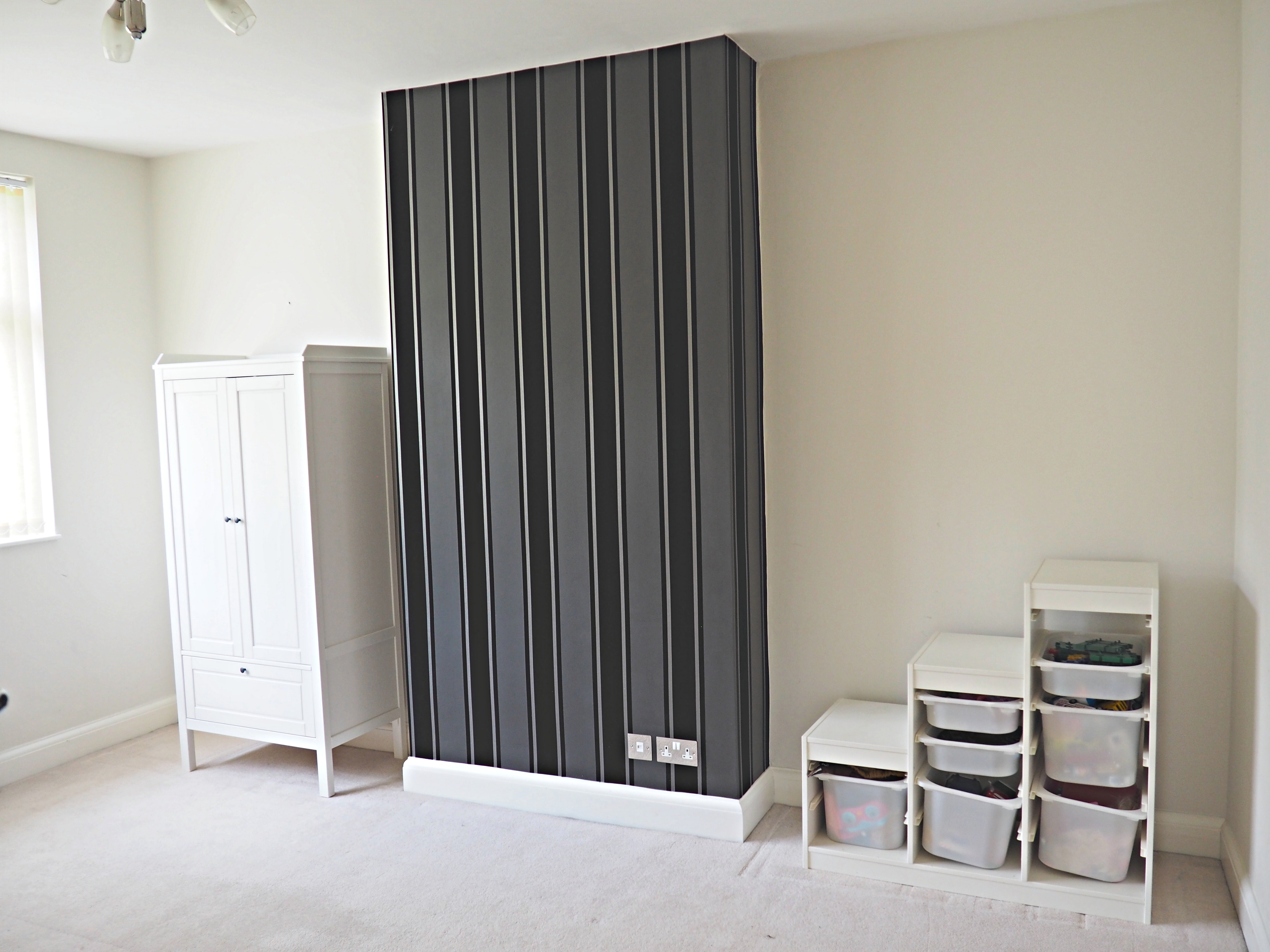 The photos above were taking on the day we moved in, and I don’t think they do the size of the room justice as it’s massive. Which is fantastic for her, but actually it’s been quite a challenge to fill it (without overdoing it) so it feels homely but not cluttered.

My Mum was a superstar and took one for the team and offered to decorate, including wallpapering, and did an amazing job so full credit for the donkey work goes to her- I only really had the vision! I’ll try and link to anything significant that I mention (links should show up in a different colour so you can click through). 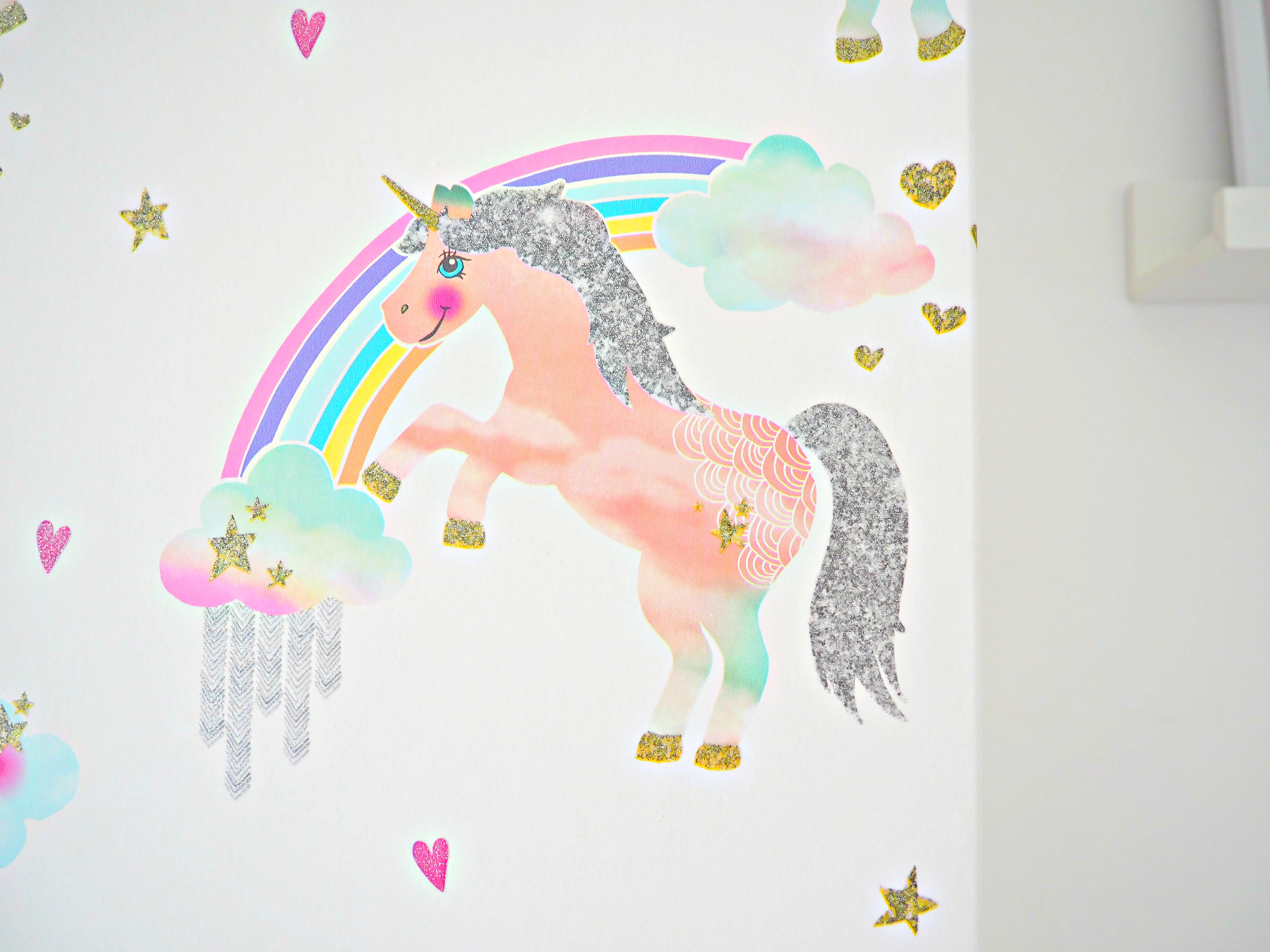 Once we had an idea that the wallpaper would be quite a main feature of the room, I could then choose some prints and accessories accordingly. I scoured the internet for all things rainbow and unicorn plus a couple of other random bits, but to be honest most things seem to have come from Etsy stores. The pieces are displayed around the room: 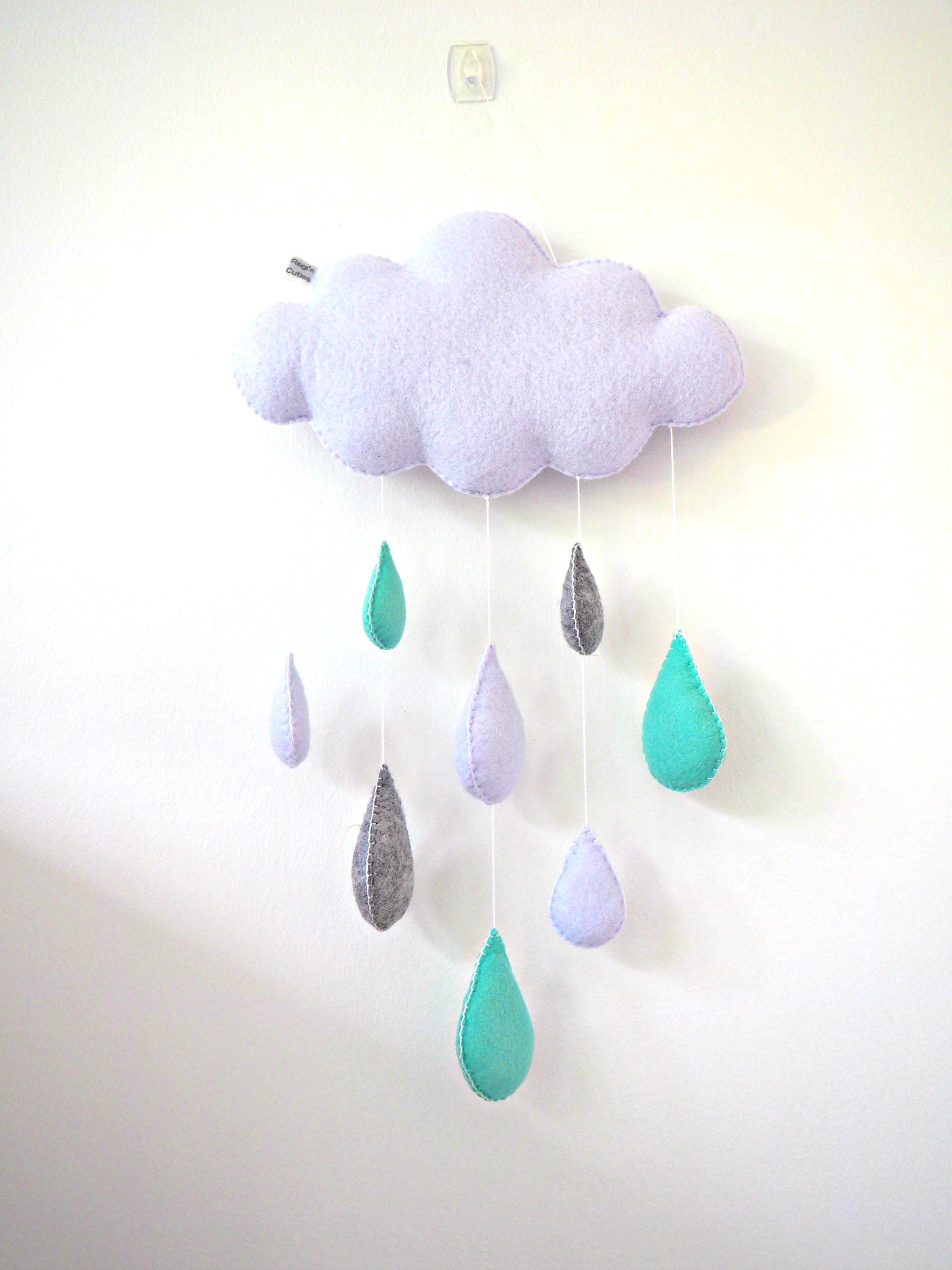 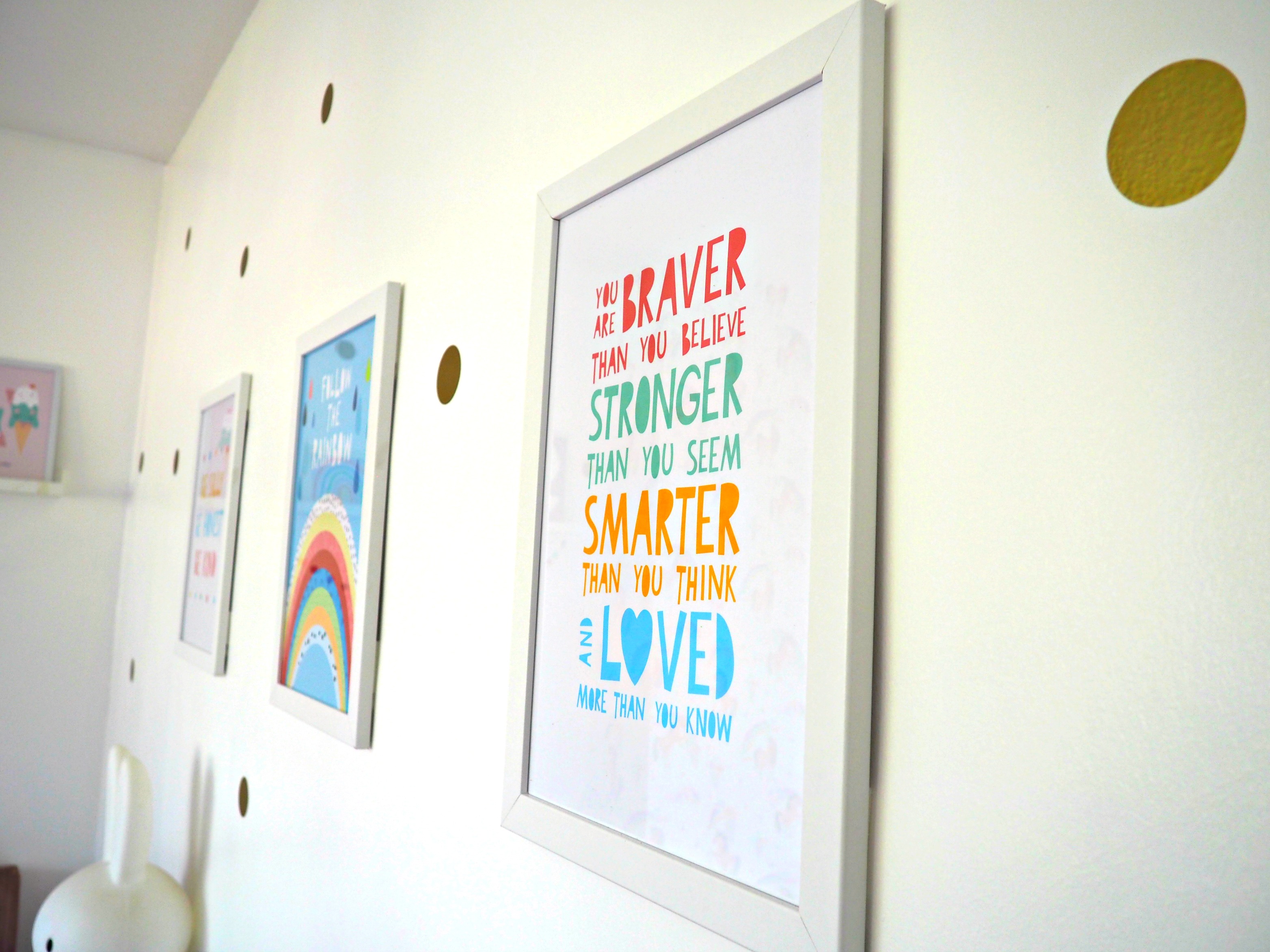 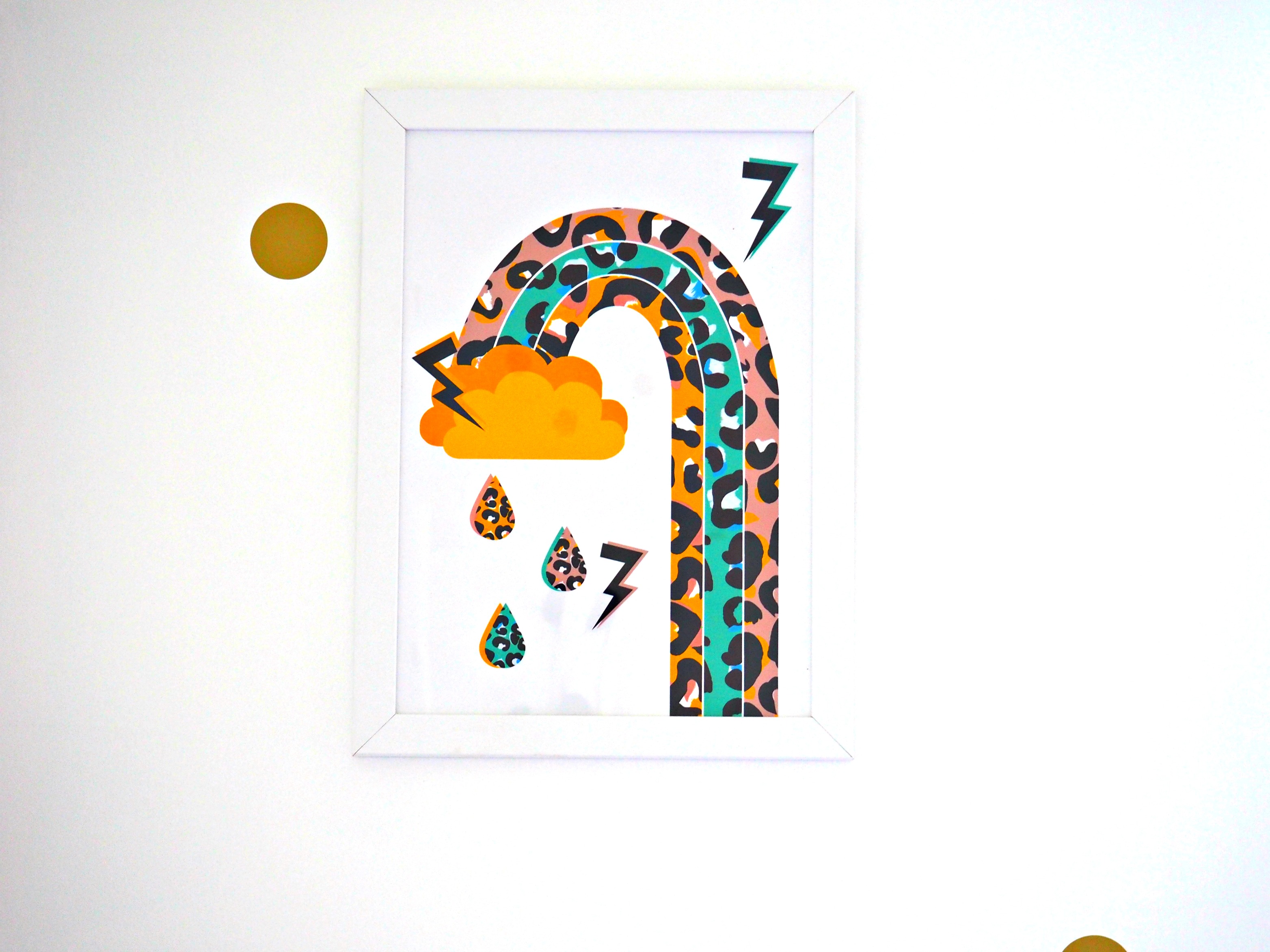 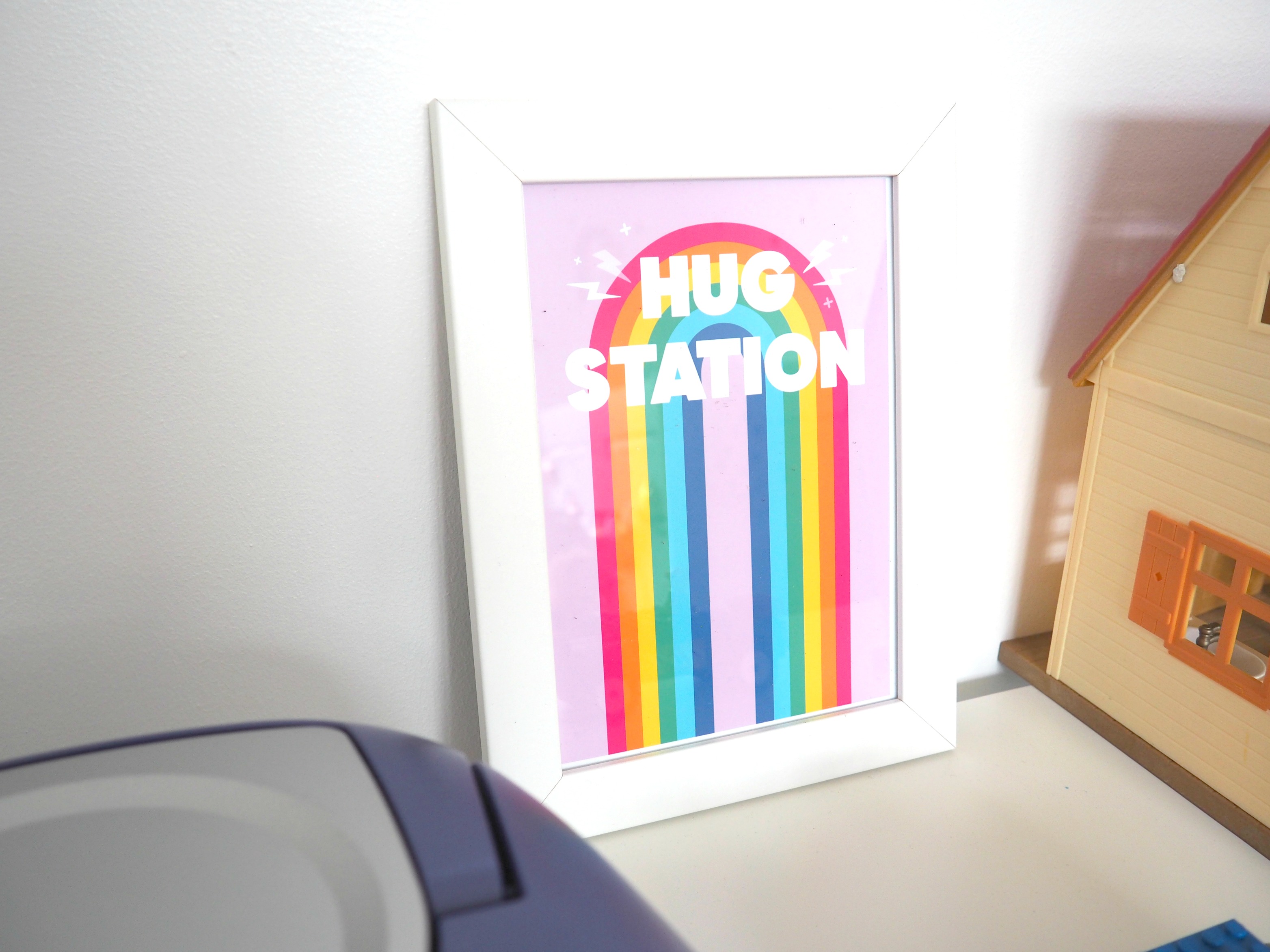 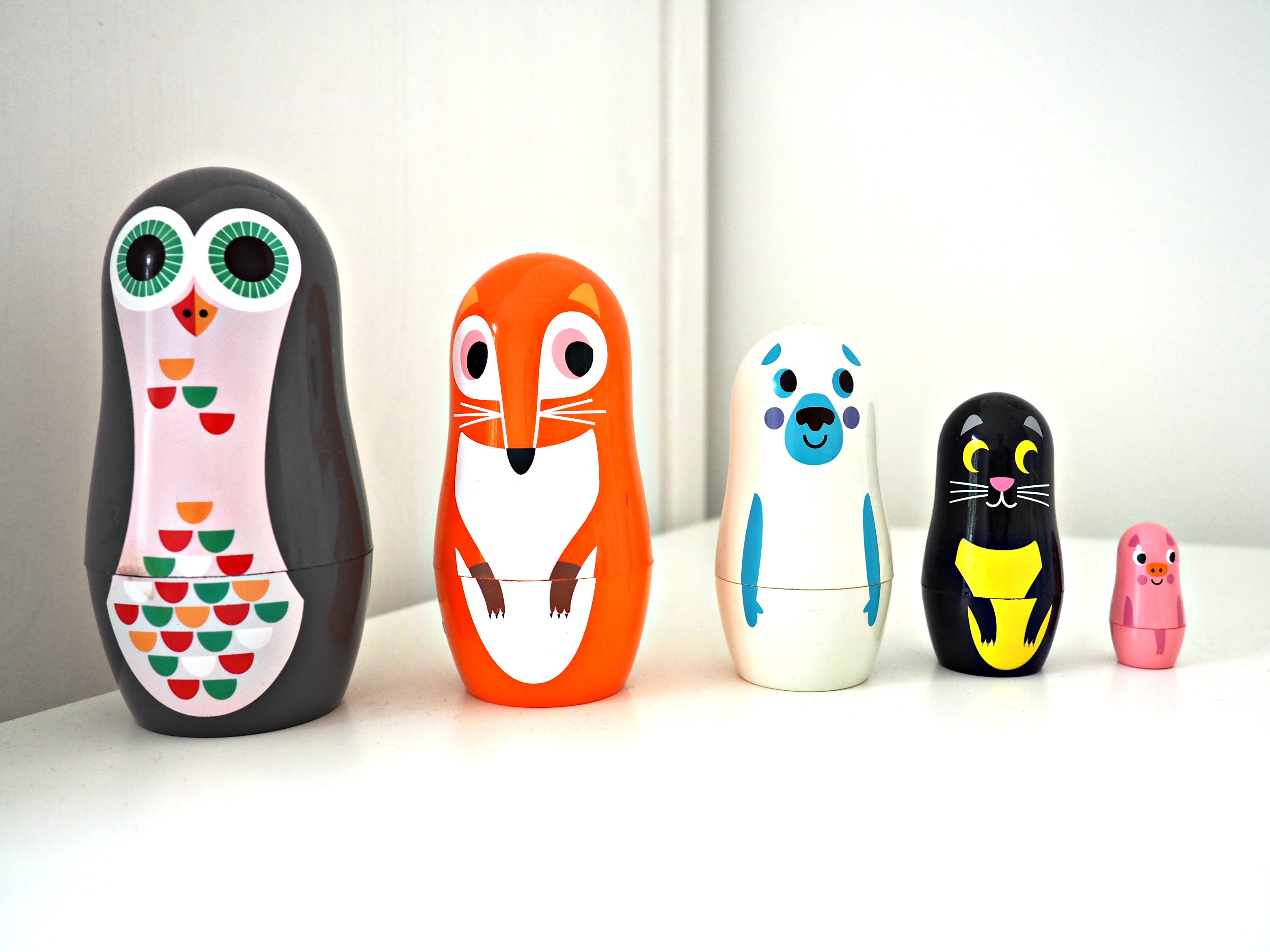 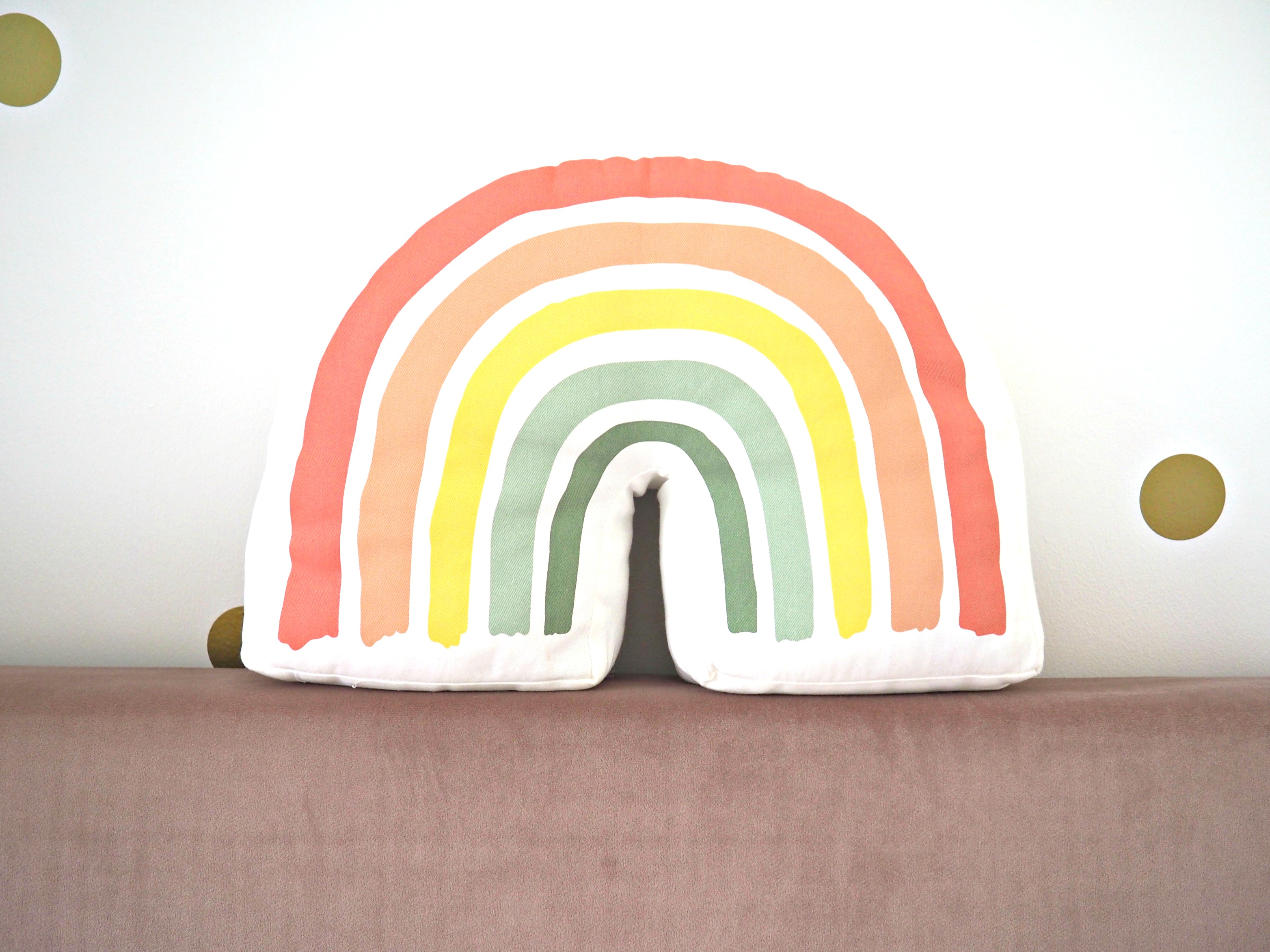 Once all these bits had been added, I still felt it seemed a little bare, as whilst the white is brilliantly bright and makes the room light up, because of the size of it, it still felt like it needed something extra. I decided to order some gold spot decals to go on the walls, and I feel that these have really tied everything together, especially as there are hints of gold in the wallpaper. They have worked really well over Sasha’s mid-sleeper bed, as it’s such a huge expanse of wall and in the end I wasn’t sure if a load of prints would actually look right here. 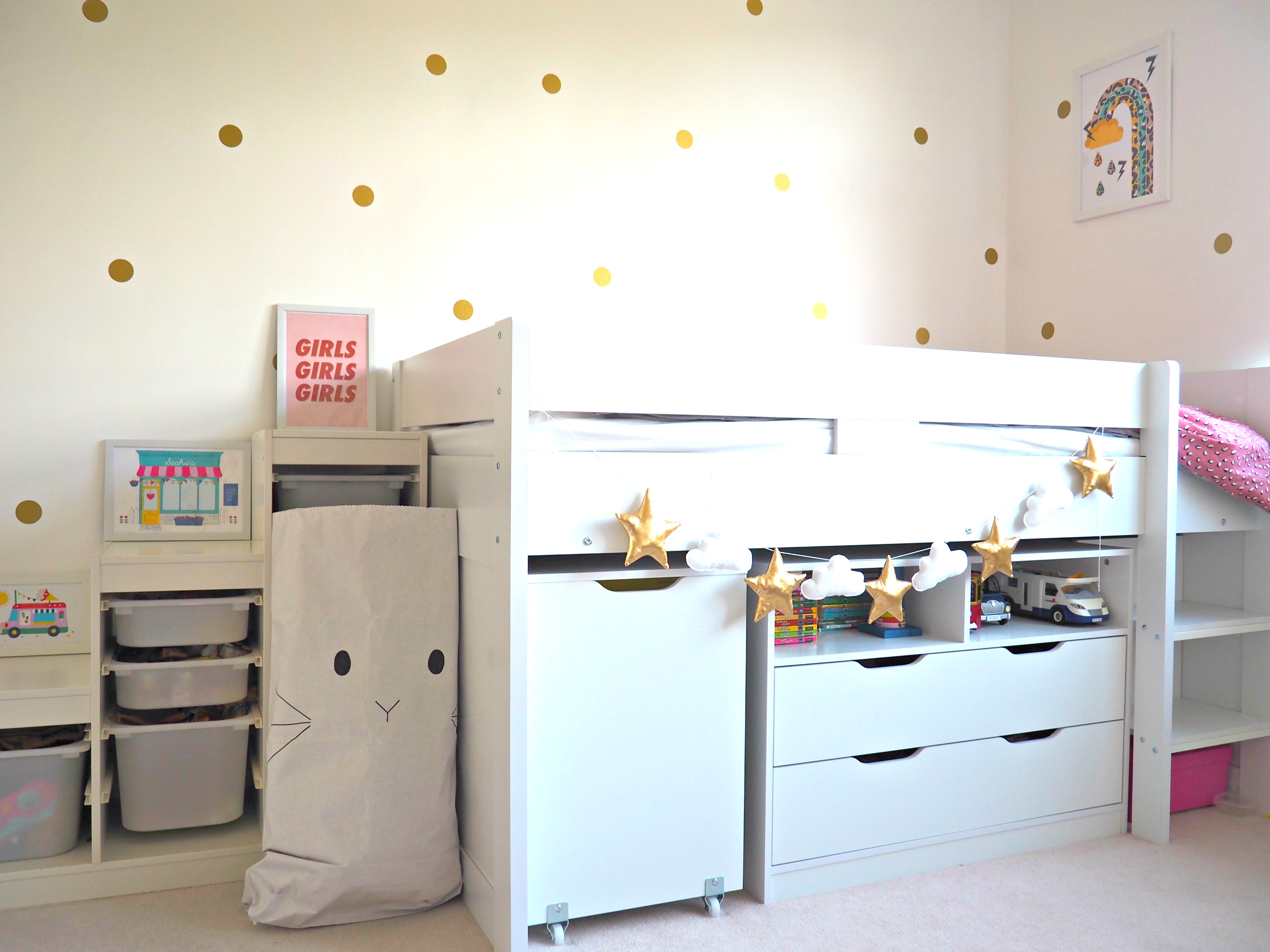 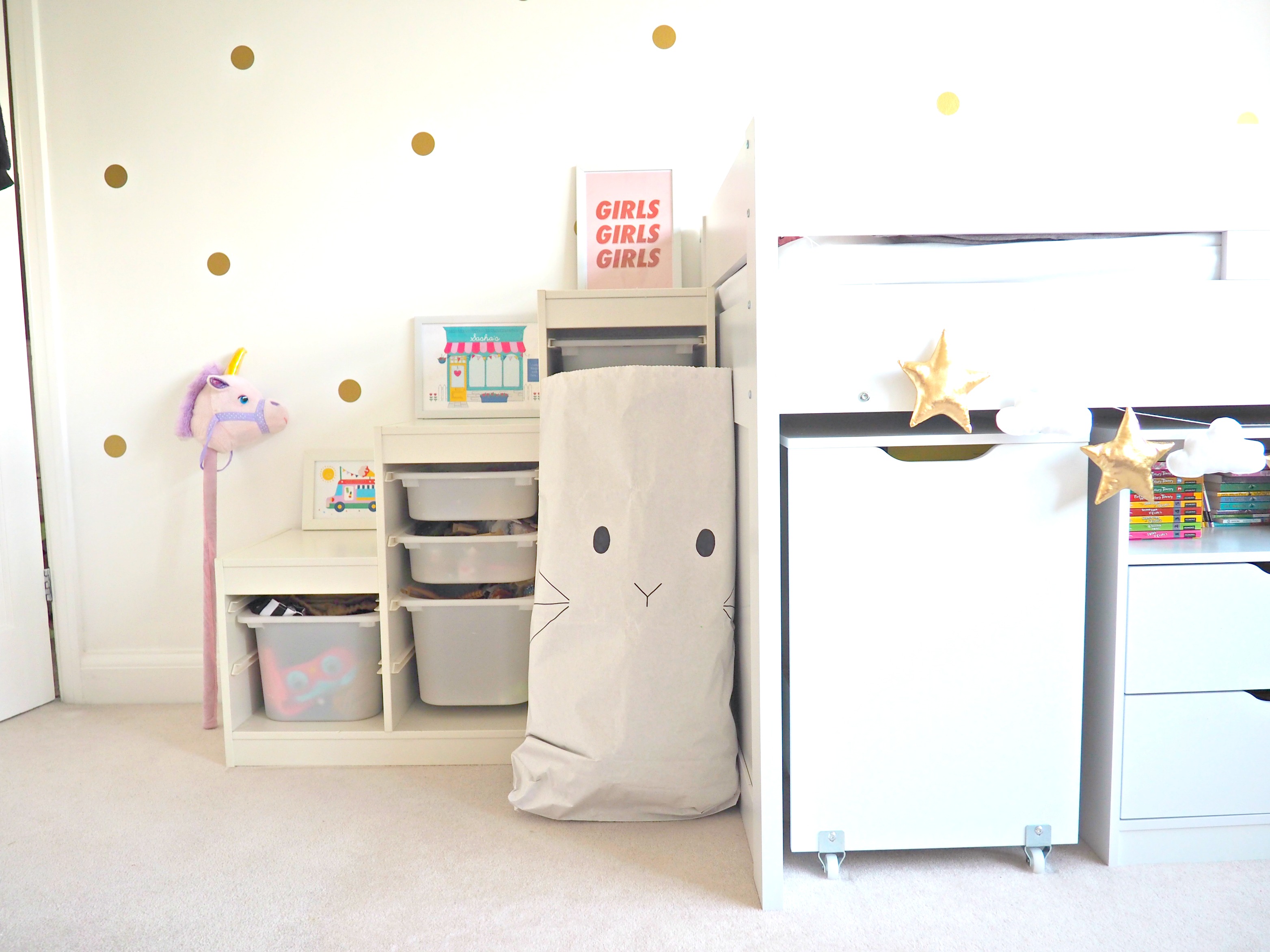 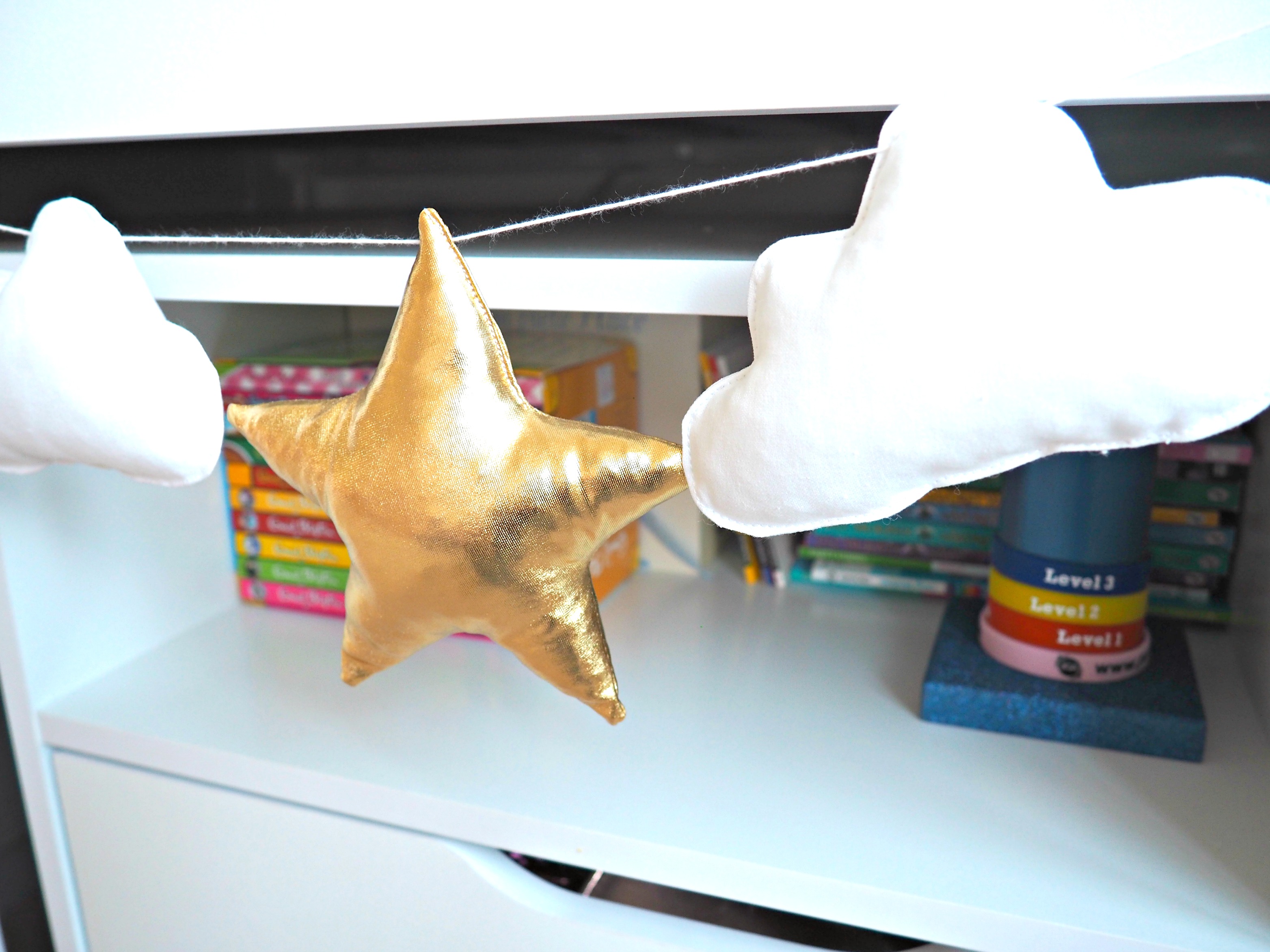 The bed is a mid-sleeper from an Etsy store, and despite some pain-in-arse delivery issues, the actual bed is brilliant quality for the price. The bunny paper storage bag (used to house various cuddly toys, dolls and squishies) is from Hello Henry Boxes, and the toy storage is mega old from IKEA. The star and cloud garland on the bed (which I love!) is from Betty Pillows Shop. 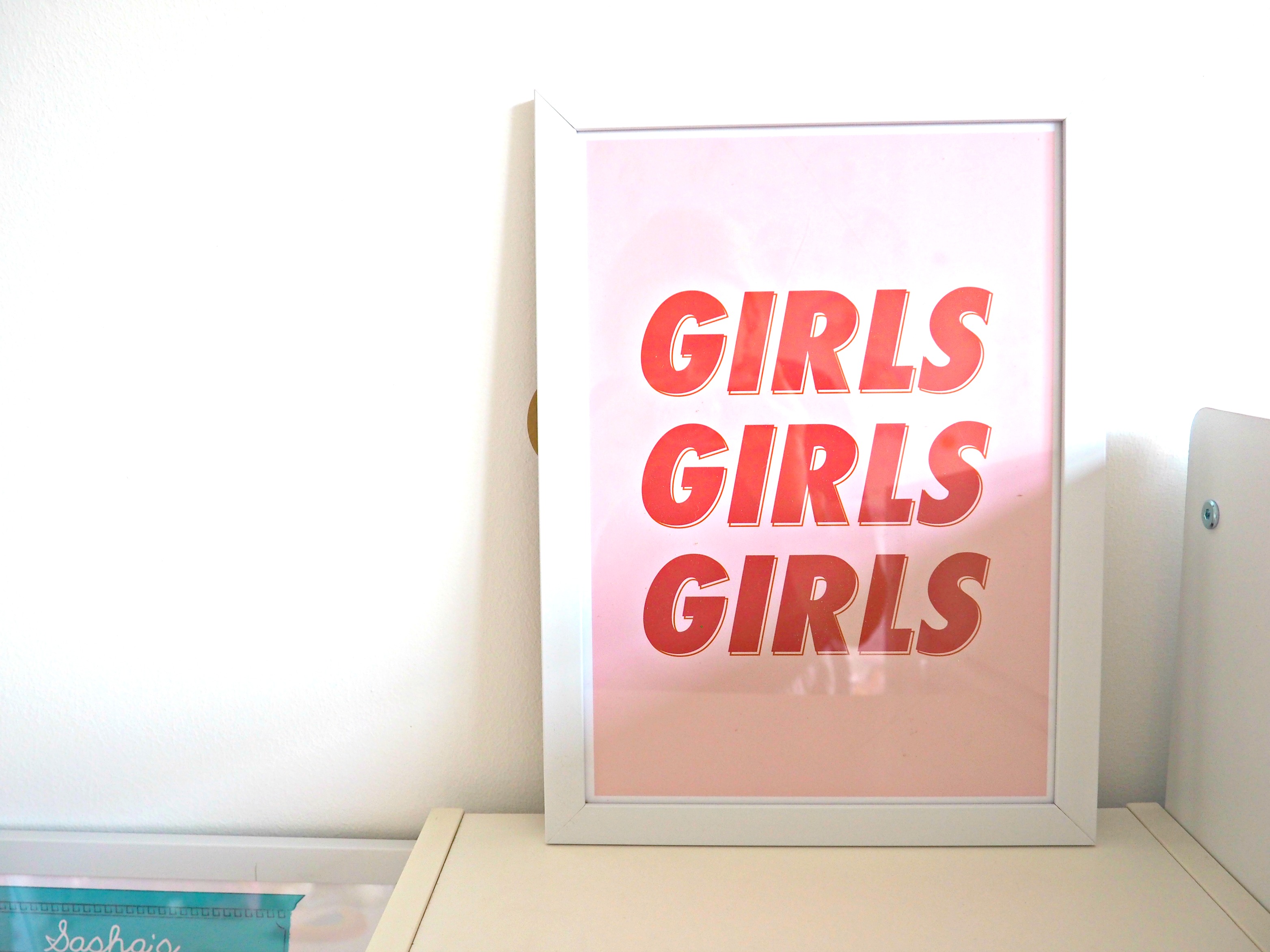 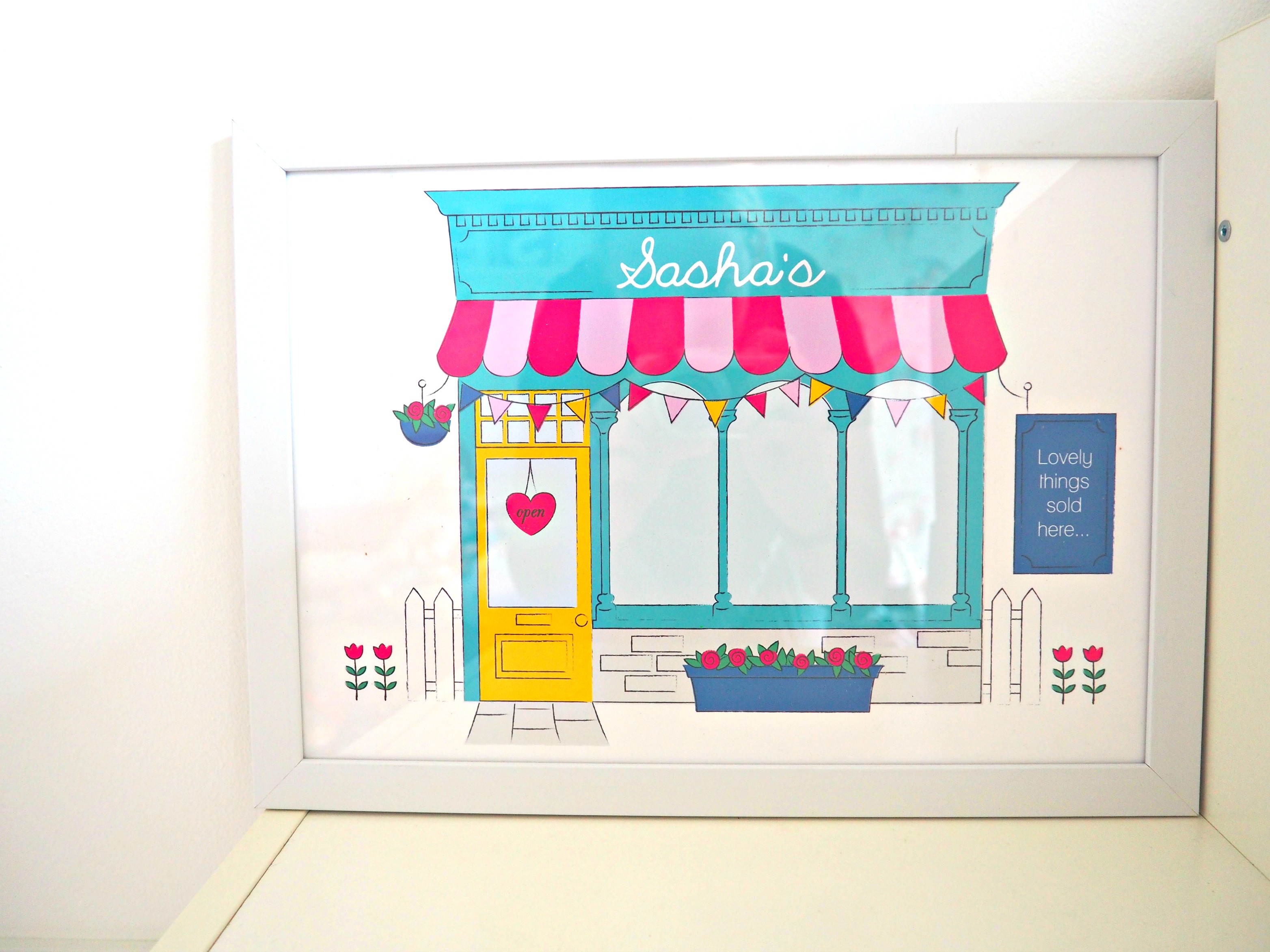 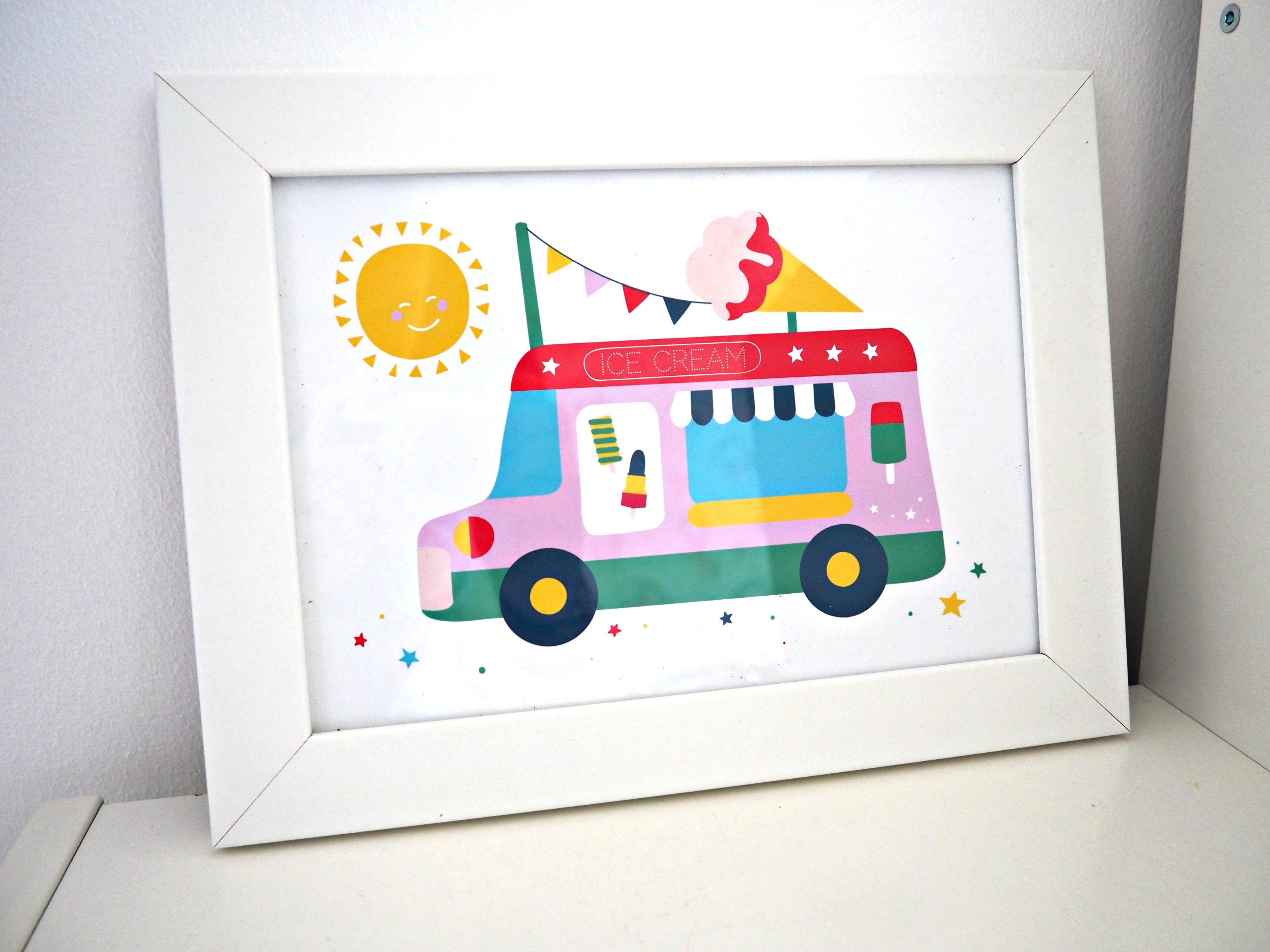 The prints on the toy storage are as follows: Girls, Girls Girls is from Richer Prints, The personalised shop print is from Paper Joy, as is the Ice Cream Van print.

I was out shopping with Sasha the other day, and we came across this fab (and excellent quality) pink leopard print bedding from Primark, and only £9! 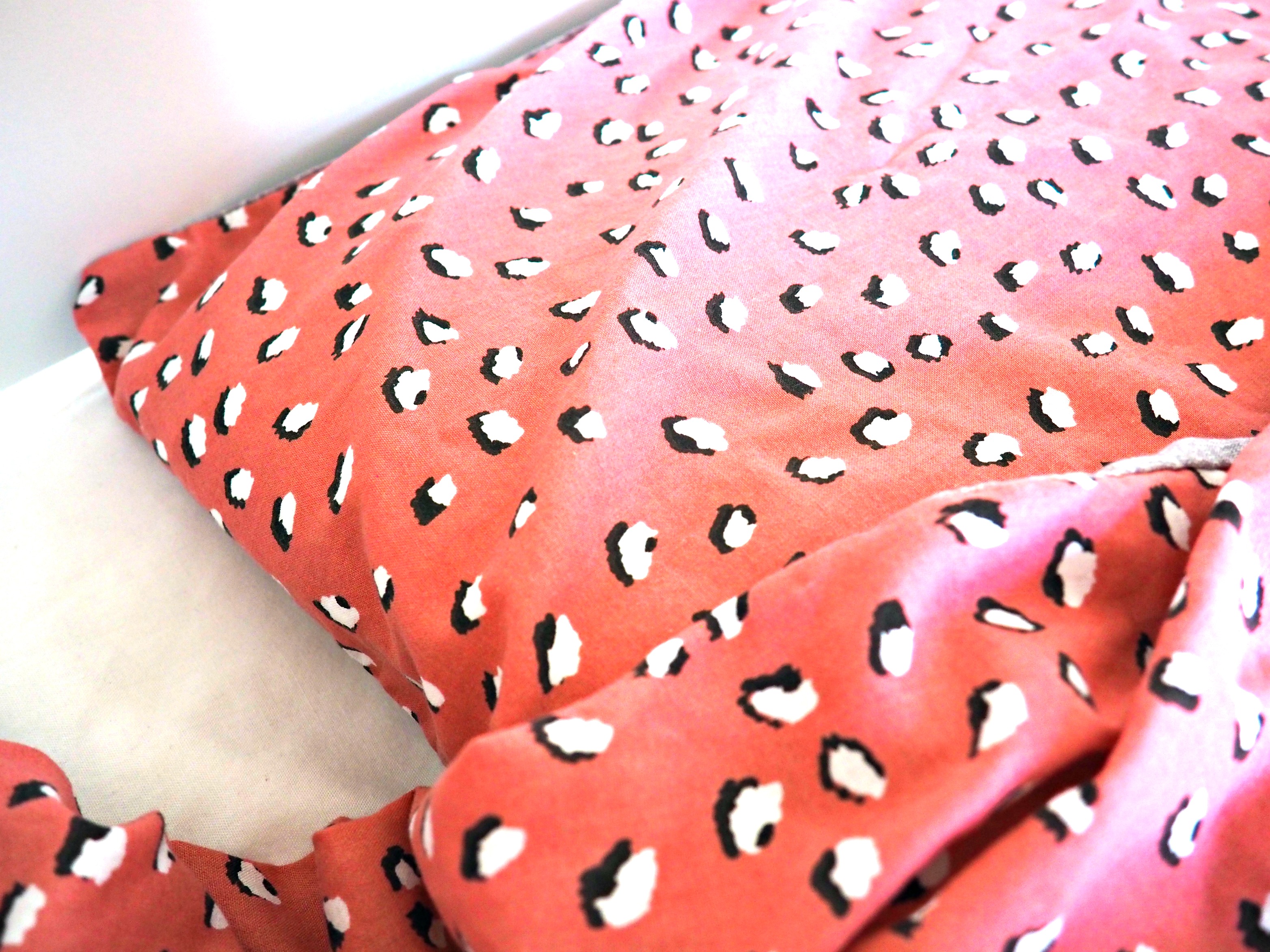 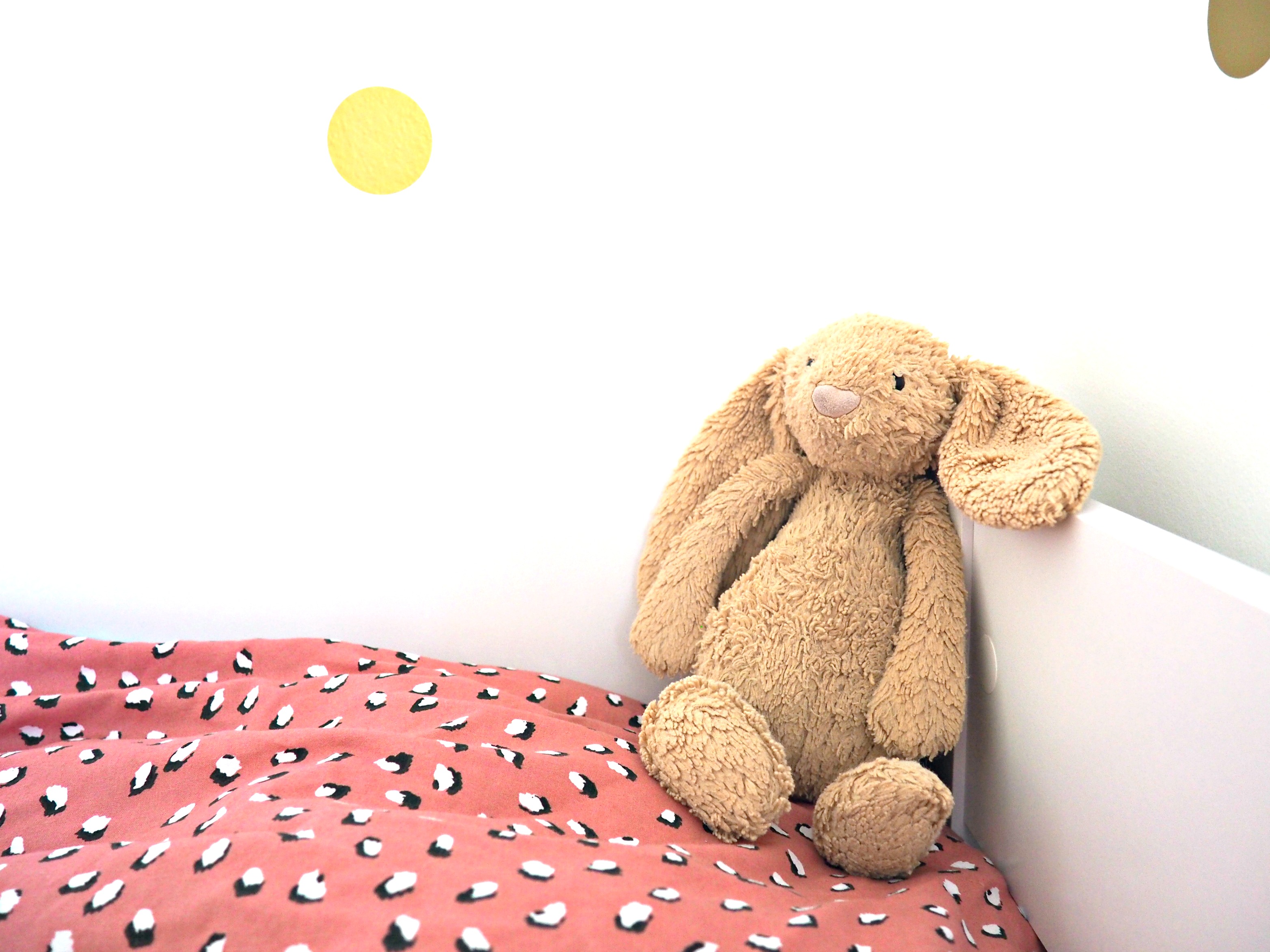 And finally… the finishing touch and the thing that we saved a space for, this BEAUTIFUL dusky pink velvet sofa bed from MADE.com. We knew we wanted a sofa bed in this space so if Sasha had a friend to stay, or family, then we would have somewhere for them to sleep. It looks amazing here, and has really completed the room! 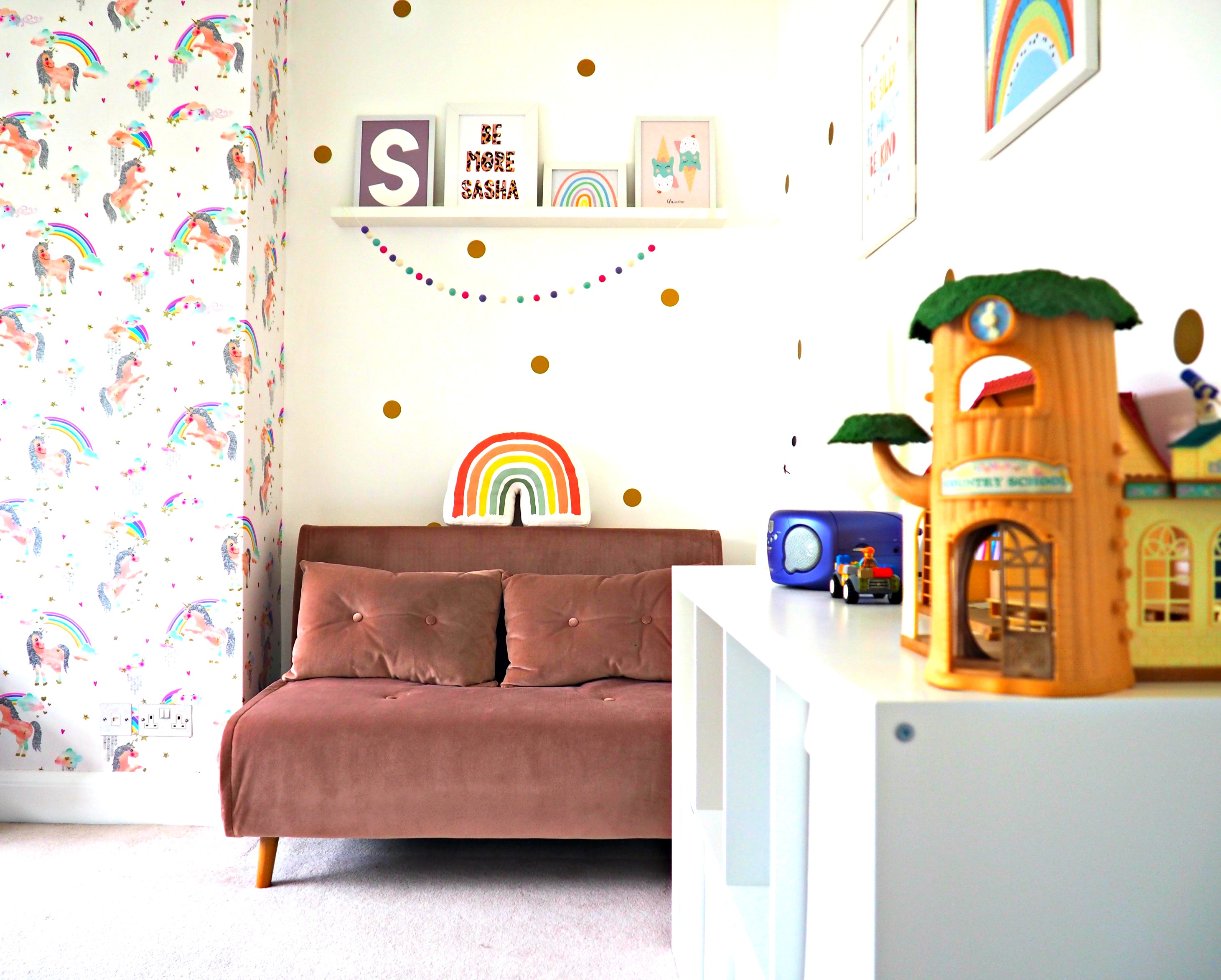 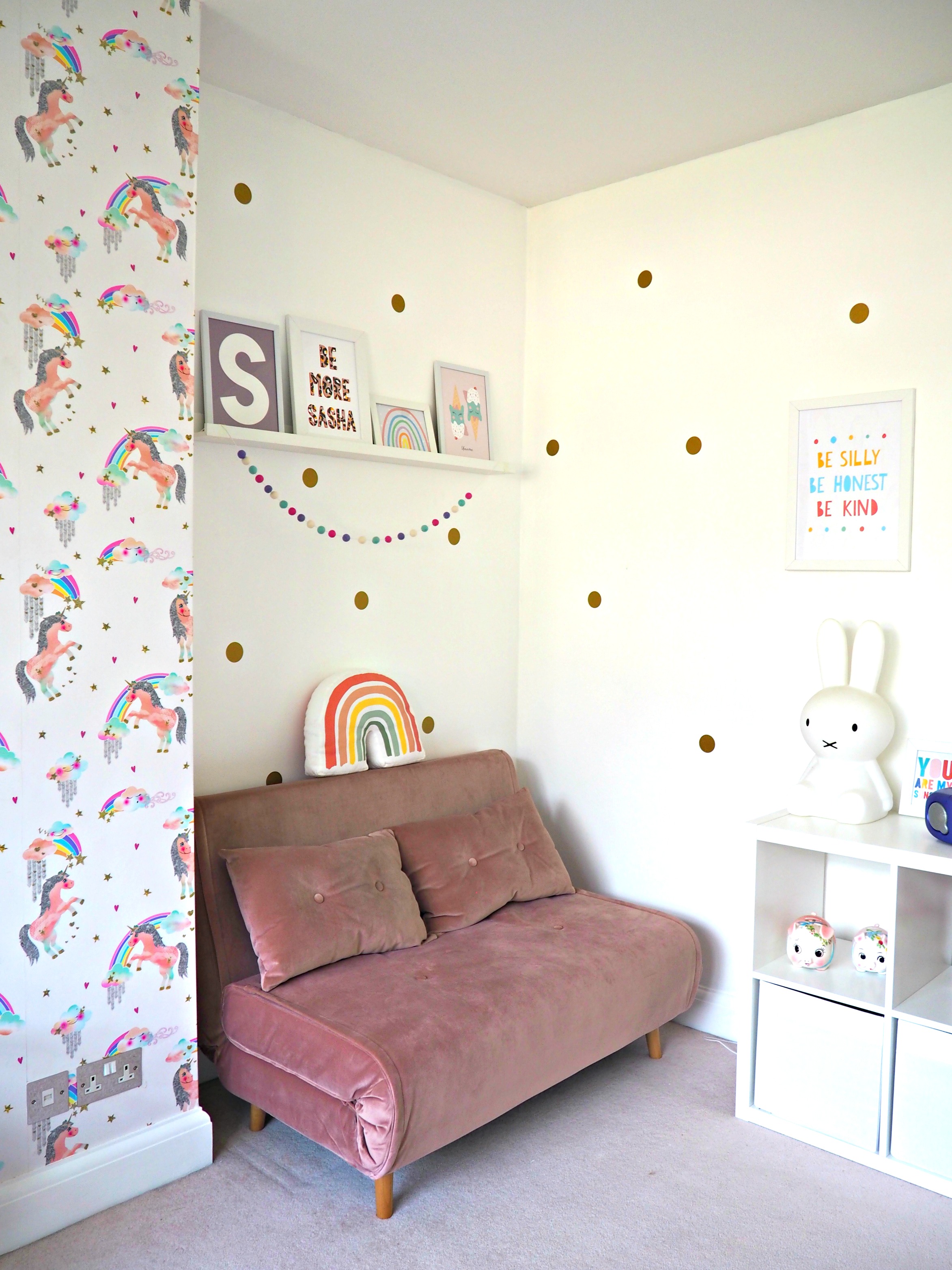 In the interests of reality in an often ‘Insta-unreality’ world, this room can often be messy, we have a couple of other sets of ‘character’ bedding, and an LOL Doll clock is soon to be added somewhere at her request. I think it is SO important that a child has a say in how their room is done, and often this means that it might not be as pleasing to the eye as we’d hope! With this room I reckon we’ve got the best of both worlds, and it should be fairly easy to update the room as she gets older and her tastes change.

If she ever doesn’t want that sofa though, it is SO mine…