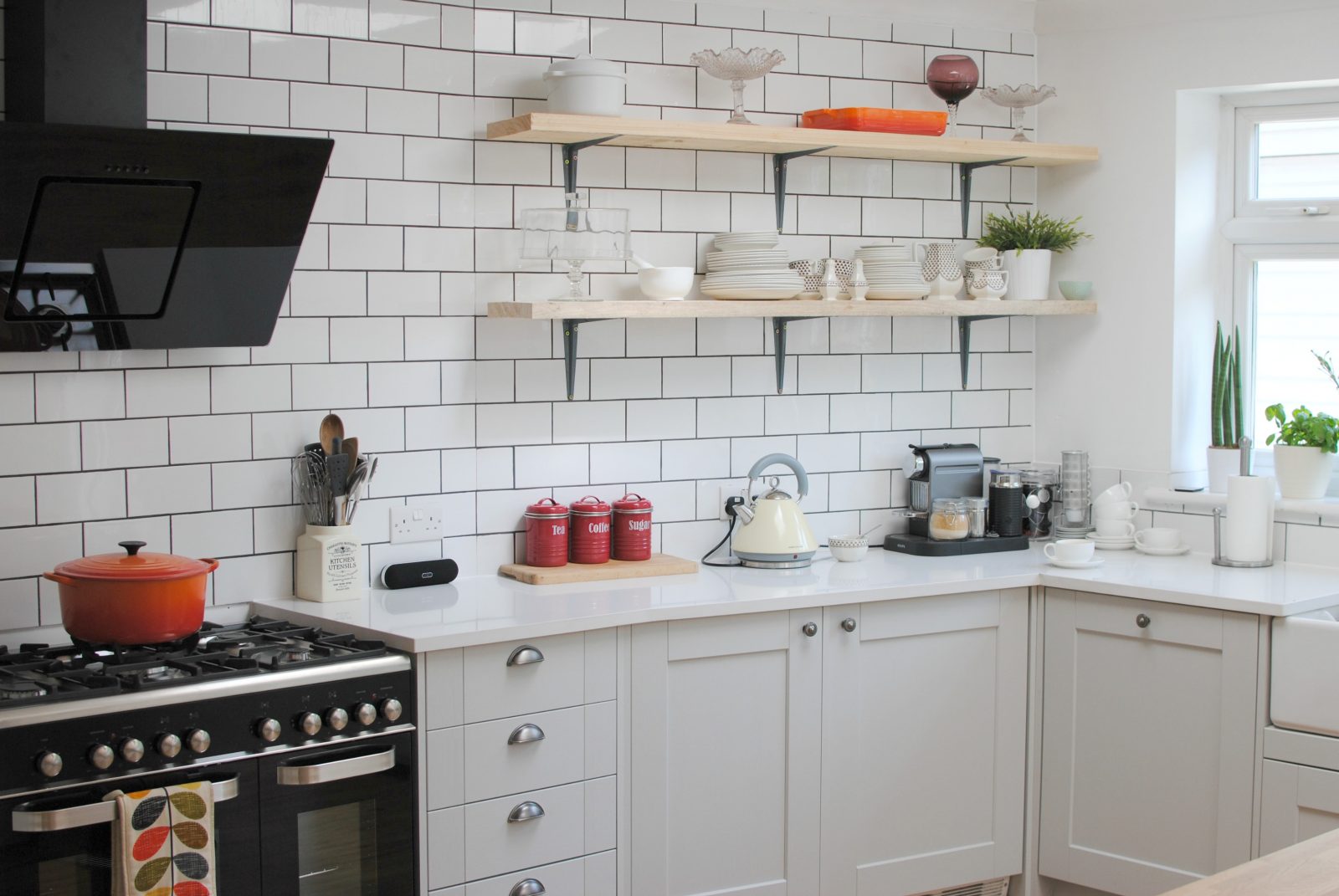 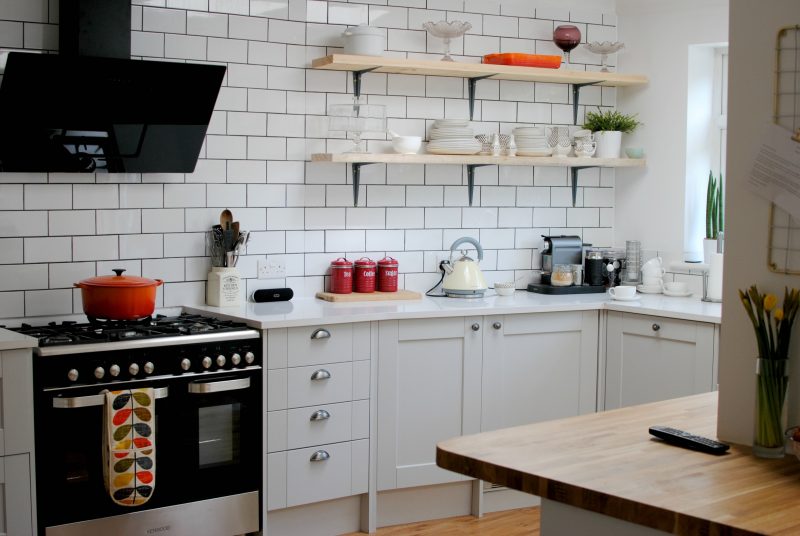 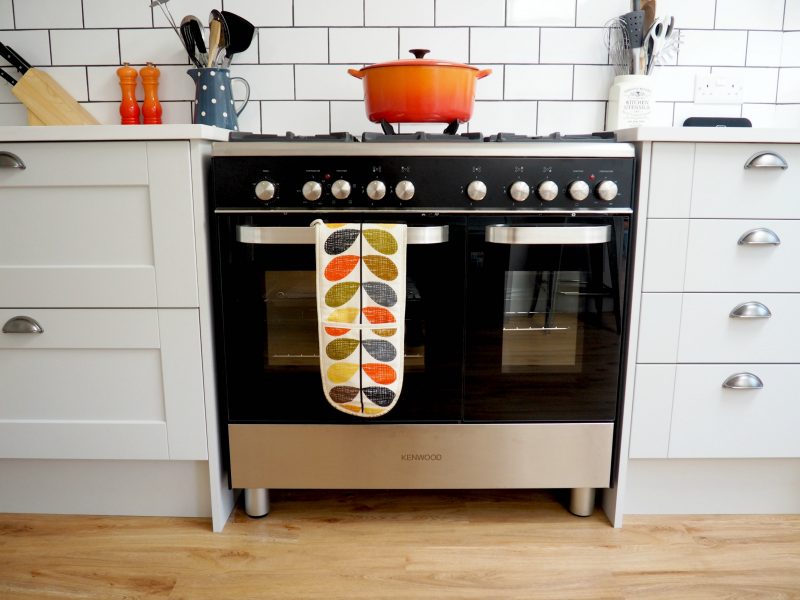 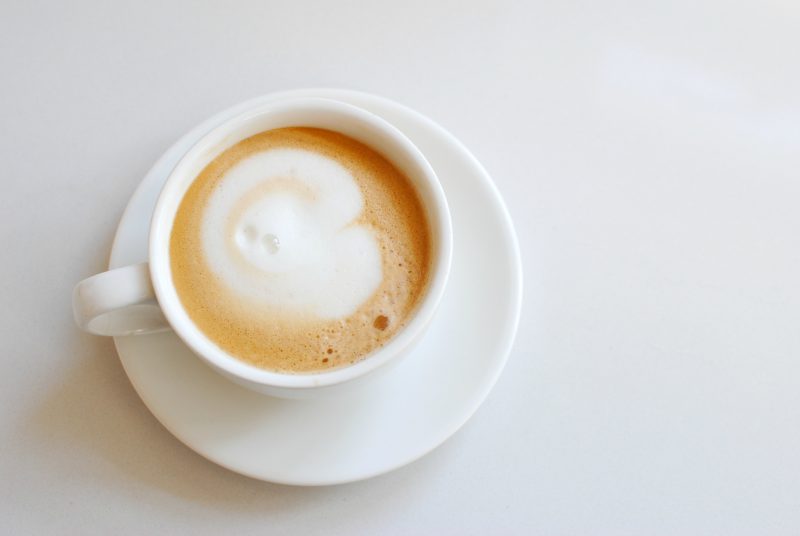 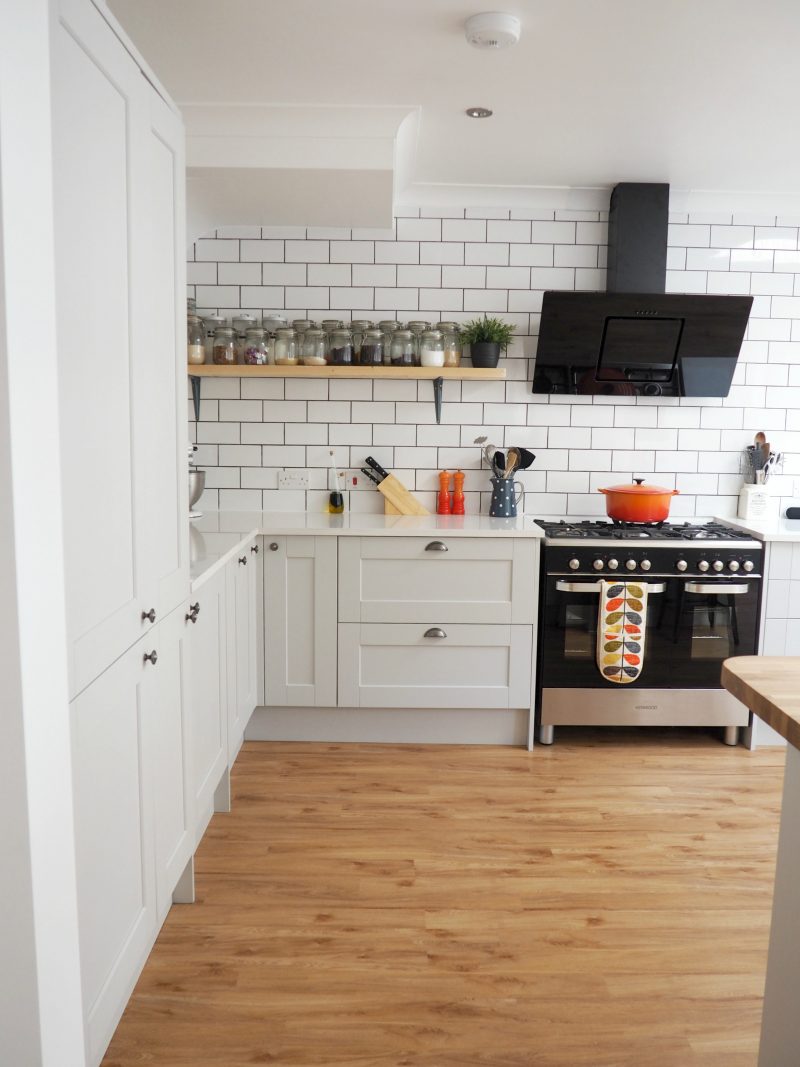 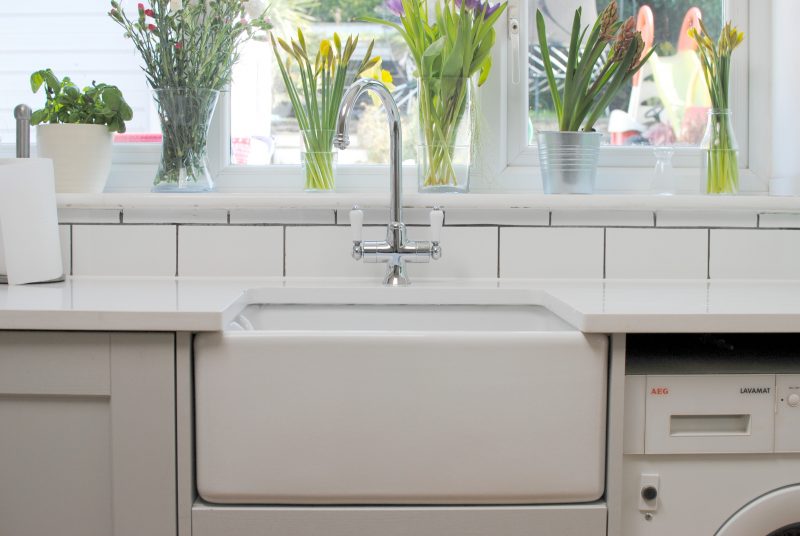 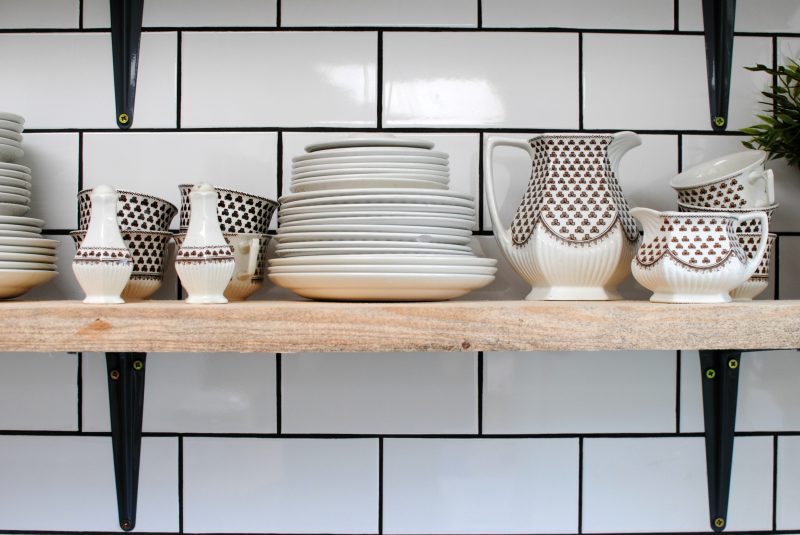 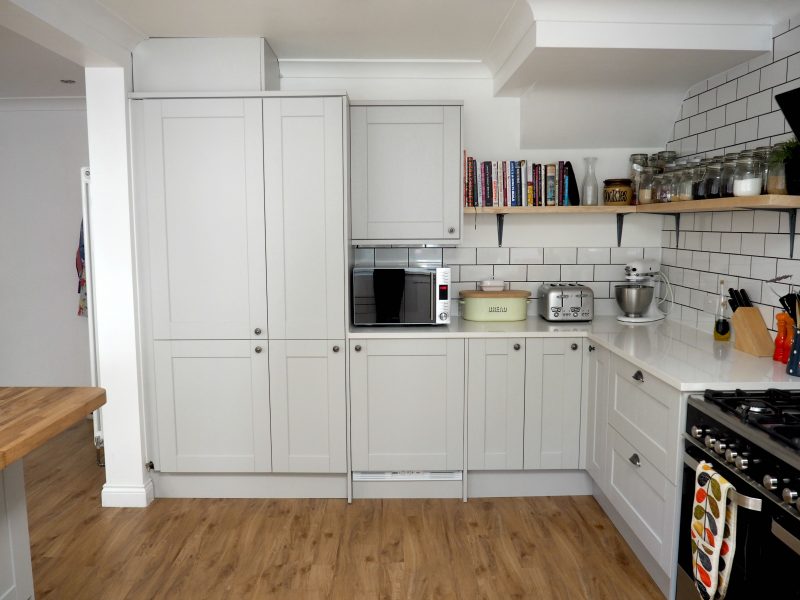 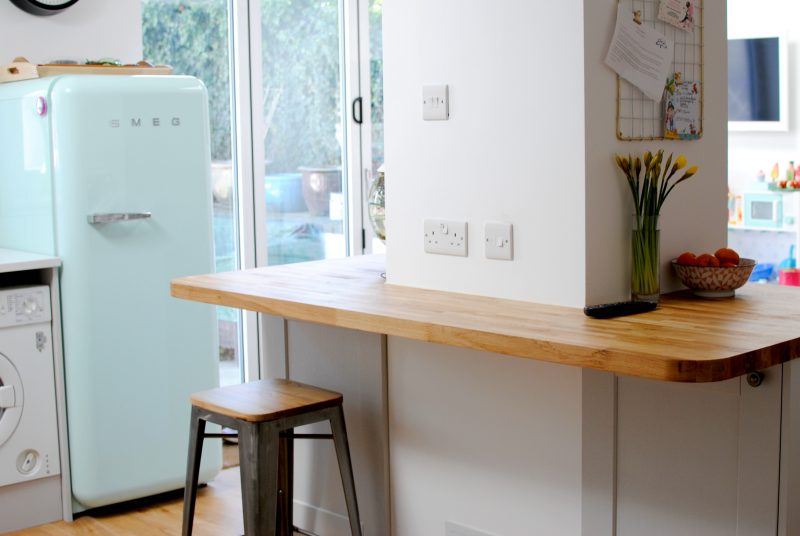 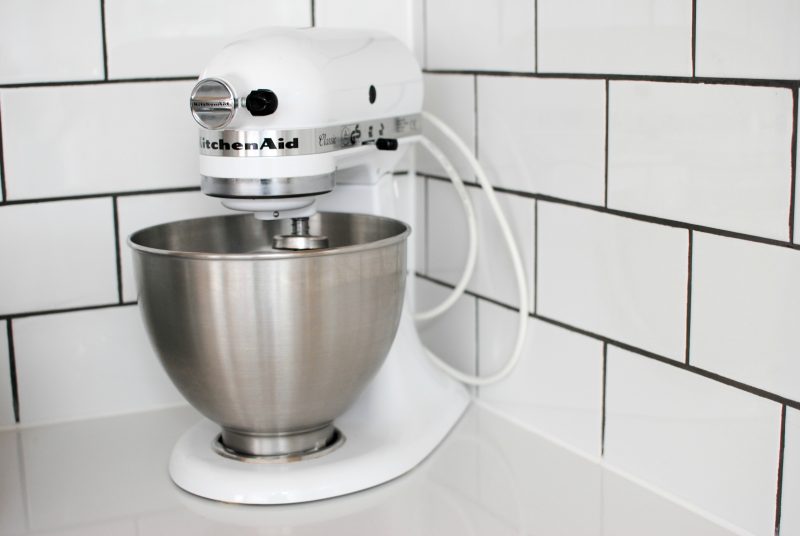 A very photo-heavy post today, but one I am SO excited to share with you- one half our of kitchen/dining space is finished!

After 3 weeks that turned into 6 due to our dodgy floor (and another 5k spent, gulp), we are back in and thoroughly enjoying our new kitchen.

When we bought our house in October last year, we knew there was a lot we wanted to do with it, despite us being fortunate in that it already had the decent bones of an extension, built in the form of an extended kitchen and dining room. These rooms were brilliant in that they were both unusually wide, but our ‘issue’ was that although you could walk round from the kitchen to the dining room, whoever had built the extension didn’t knock the main wall down in between two rooms. Kind of making it one same room, kind of not.

We’ve knocked that main wall down and created one whopping room for both kitchen and a dining/social area, as well as open up the doors at the back with bigger bi-folds, as the previous patio doors were tiny.

As the room is East-facing it means that this room can be quite dark. By opening up the room, and making the opening to the bi-fold doors bigger, the room feels SO much lighter and airier. We also carefully chose our kitchen with creating more light at the forefront of our minds. I love the current trend for dark grey and navy kitchens, but I knew deep down that this wouldn’t work in our space. We decided to go for a Howdens ‘Burford Grey’ kitchen, with oak work surface for our middle island, but we wanted something different for our main work surfaces. On our builder’s recommendation, we sourced our work surfaces from Leyton Stone (geddit?!) in Essex, who were really cheap in comparison. We went for a Quartz work surface, in ‘White Storm’ to reflect the light, and I have to say I really think it’s worked. I was nervous about white work surfaces, but we absolutely LOVE them!

To break up any ‘too white’ blandness, we made sure our tiling went up to the ceiling and we used dark grey grout for interest. I also wanted open shelving to create a spacious feeling, and to showcase some carefully selected pieces of crockery/glassware, and our recipe books and jars. I’ve had SO many compliments and questions about where we got the shelving from, but the truth is it only cost a grand total of 34 quid for two scaffold boards (cut down to size) from Travis Perkins! Then added some cheap-as-chips grey brackets from Screwfix.

In the middle of the kitchen is our island and pillar, something I wasn’t sure was going to work initially, but we had no choice but to keep as it would’ve cost a further 15K to take this out and have a steel ‘picture frame’ inserted in the build instead. As it happens, I actually LOVE this as a feature, and I’m so glad we didn’t waste so much money getting rid of it. We’ve added a charging station to the pillar, and it means I can hang pictures and our notice board on it. 3 bar stools from ace store Cult Furniture complete the industrial-yet-airy-vibe we’re going for.

I’m going to write a post soon detailing the costs of all the work we had done, to give people a ballpark idea of what to expect when carrying out work like this. Before we started I spent ages googling but couldn’t find much around to give us an idea, so I’m hoping at least one person out there might find it useful!

In the meantime, what do you think?

I’m so happy with the space, I’ll often come back in before I go to bed just to stare at it #saddo and I hope I never get bored of it.

Just need to sort the other half of the room now with storage, a new dining table and pictures/prints, and then I’ll be be able to show you this. At the moment it’s a bit of a room of doom!

Here’s a video tour of our new kitchen: 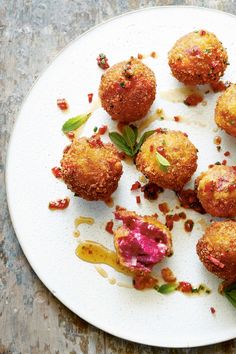 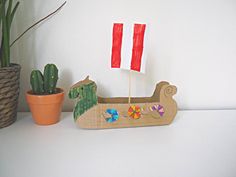