We are in! We moved into our new house last Tuesday, and whilst things have been a little crazy (I can confirm that half term with 3 kids on moving week is NOT ideal!), we are slowly starting to get back into some kind of routine and finding places for everything.

Moving day couldn’t have gone smoother though which was brilliant. The Friday before our move we were expecting two guys from the removal company to come in the morning and pack up our kitchen (they usually come the day before moving day, but in our case this was Bank Holiday Monday so they couldn’t). Whilst they arrived to do this, they also brought with them two more chaps and the world’s biggest removal lorry, and began loading up everything we’d packed already, including our giant climbing frame and trampoline. This meant that come Tuesday they had relatively few boxes and furniture to load up, so we were all packed up by 10am, and out of the house by lunchtime post-cleaning! After getting the call to say we had completed at lunchtime, the guys had already started unloading into our new house’s garden cabin/summer house (the house was vacant and amazingly unlocked when we rocked up!). By about 3pm the removal company were all finished, and by 4pm our carpets were fully cleaned by a local duo who were poised for our call once we had completed (the previous owners had two big dogs and let’s just say it was pretty ‘doggy’ and the place needed to be fully cleaned before letting the kids roam around…)

Since then we have managed to unpack some stuff, although we still have lots of boxes of books, ‘housey’ bits and prints that are still in our garage. Despite this we have been able to crack on with some jobs already. The artificial grass that came with the house had had a few goings over with special disinfectant to get rid of the doggy odour (honestly, it just stank), my Mum has been Mrs Motivated and has started decorating the children’s bedrooms with Sasha’s room nearly complete already, and we are having the dangerous and very deep, empty pond filled in tomorrow by a builder. I’ve booked in a local security company to fit a modern alarm system, and have had the first of a few quotes for window shutters round, so it’s all been busy, busy, busy. Thankfully I work from home now, or am at home with Arlo anyway during the day, so this is definitely a big help when it comes to getting quotes or being around to oversee work.

Now we are in, I feel so relieved that we definitely made the right decision in going for this house, and it 100% feels like home already despite there being tons to do. It’s a bit daunting leaving a house that you’ve renovated and loved the decor (so long, amazing kitchen *sob*), knowing full well you likely won’t be able to do any ‘big’ jobs like kitchen, bathroom, extension etc for a few years, but we know that this new place has all the potential and we’ll get it how we want it at some point.

The main thing about this house is that there is SO much space. It has 5 bedrooms, huge reception rooms, a decent garden, plus a big shed for storage and summer house/cabin that will double up as a reception room and hang out space once we’ve finished it off. The ceilings are also so much higher than I remember, giving a really spacious feel to it. I can see though why it didn’t sell for ages. The doggy smell was just grim, and the decor is SO dull and uninspiring, absolutely zero personality and the colours the previous owners used have made certain rooms seem very dark when they’re really not at all.

In this post I’ll give you a mini tour of the downstairs of the house (upstairs, garden and outbuildings pics to follow in another post I think as this is already long) and talk through ideas and what we might do to each room… 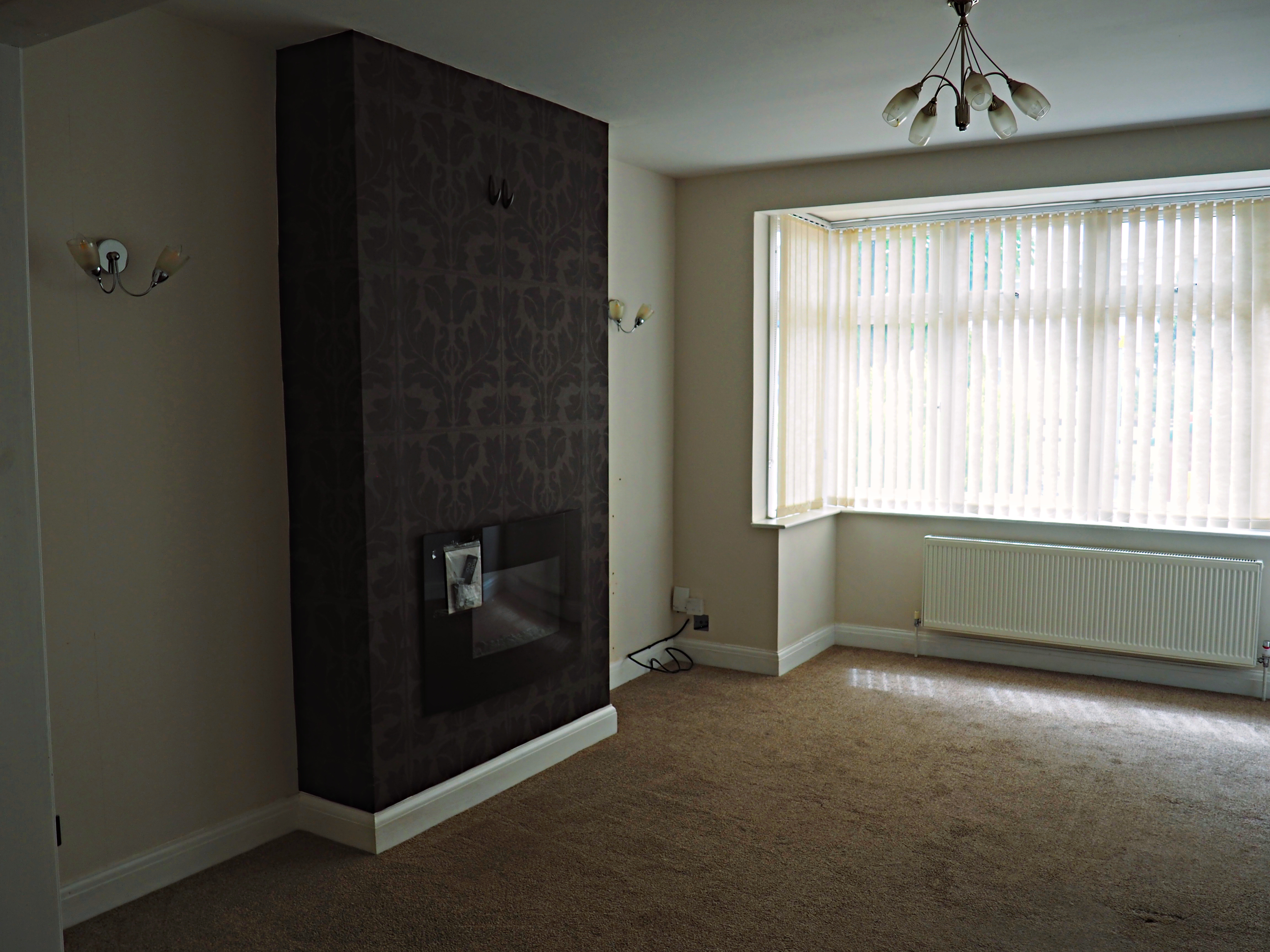 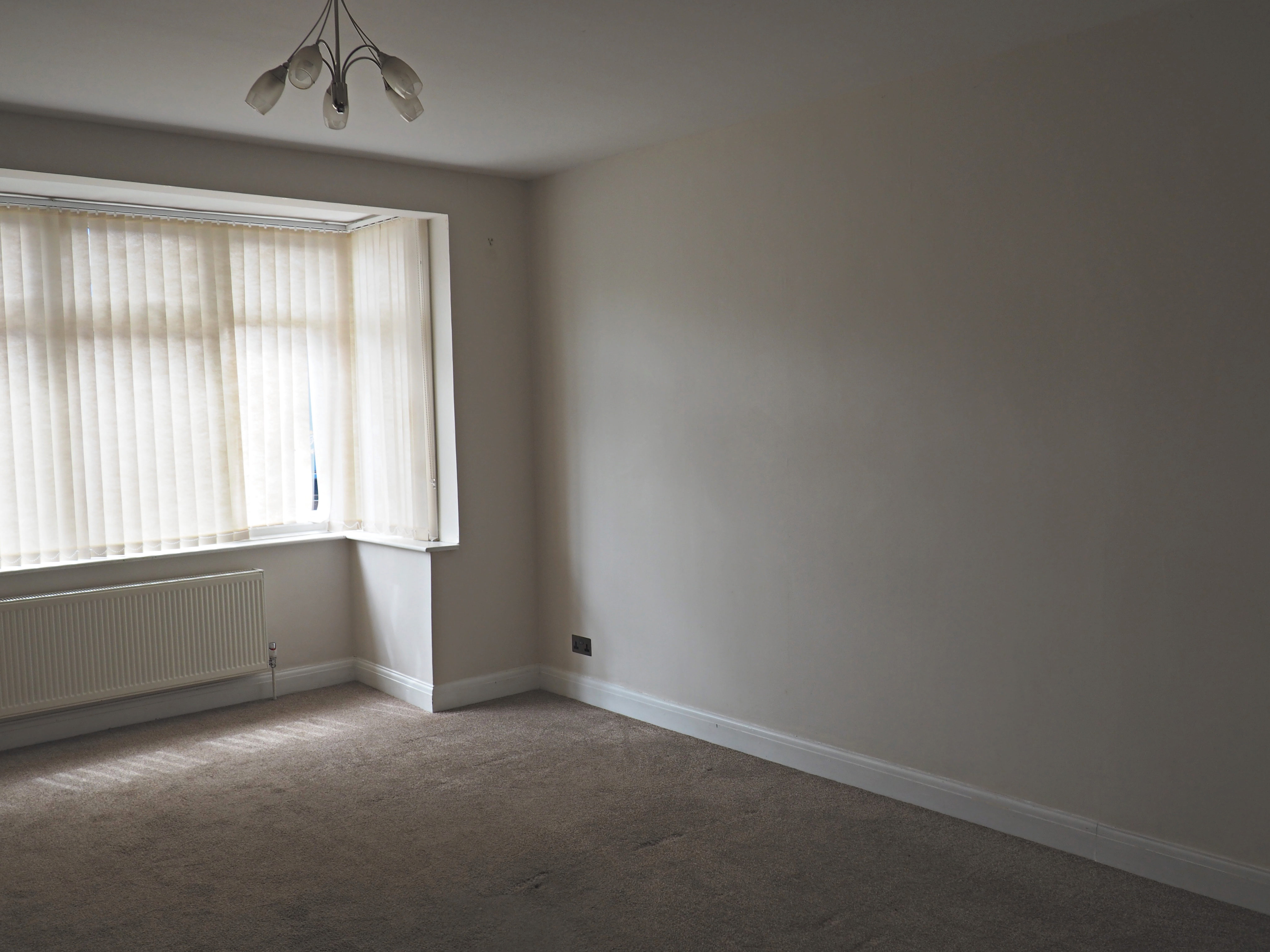 The living room is a really decent size, and is open plan to what would have been the traditional dining room and a small extension at the back of the house. It has huge windows with a big, square bay, and apart from us obviously having to decorate is in pretty good nick. You can see in the first picture that there’s a rather jazzy fire (electric, fake, that blows heating out, niiiice) that probably cost a lot to put in and I guess looks okay… although when you turn it on we’ve decided that the fake flames look rather naff! Ultimately we’d like to install a real fireplace or log burner there, complete with mantelpiece at some point, but it isn’t a huge priority and is something that will most likely happen in the future. What has thrown me with this room is the fact it has carpet. In our last house we inherited wood flooring throughout the ground floor, that with a rug I actually quite liked. However, I’m actually enjoying the fact that carpet is running through this room and the ajoining one, and is actually cosier and much nicer for the children to play on. So it could be a keeper! Ditto the wall lights, whilst these ones aren’t our cup of tea, I’ve been liking the effect that they give off when switched on, so I think we’ll look for some more modern, industrial-style ones.

The ‘Middle’ Room and Garden/Dining room 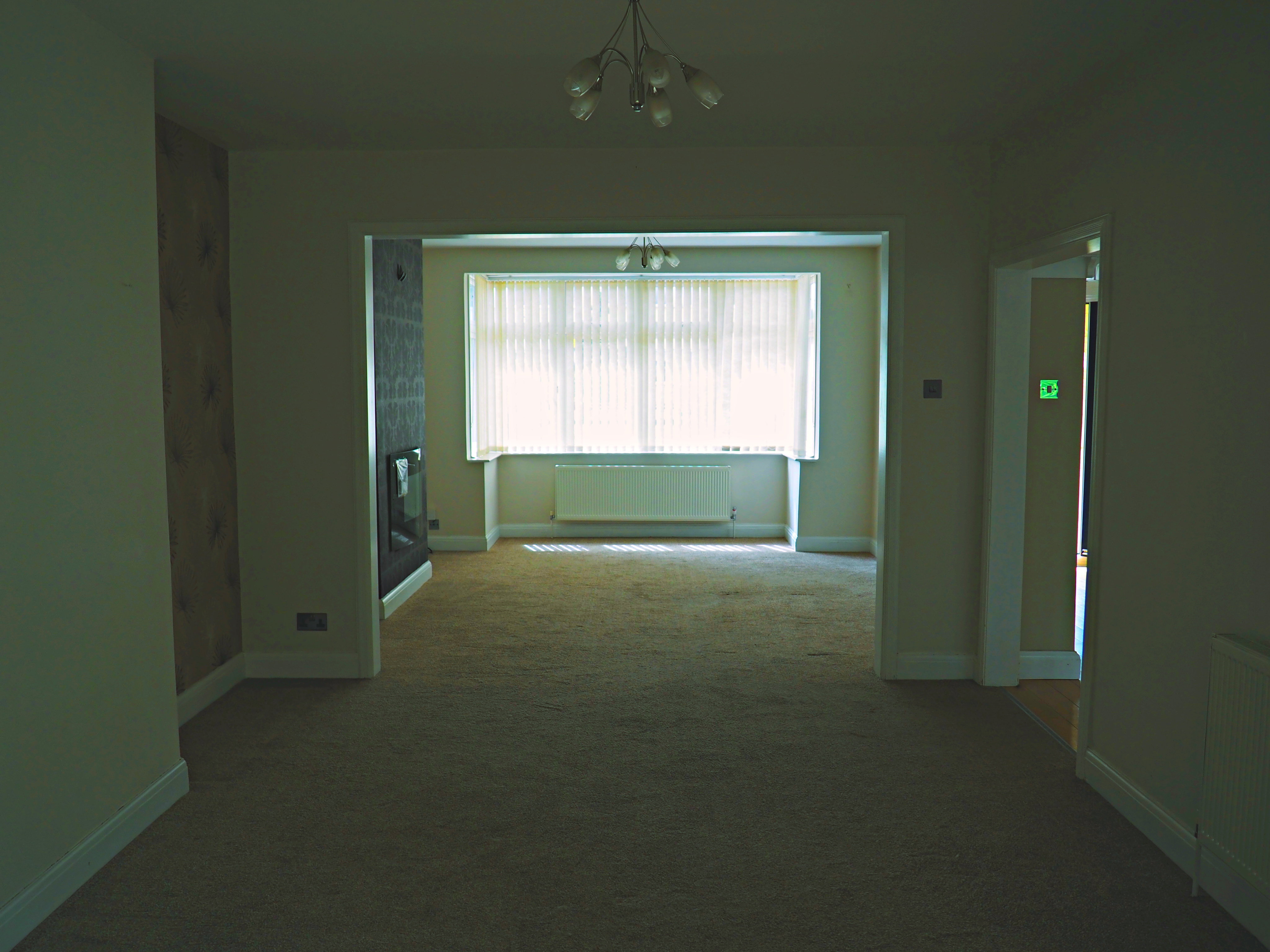 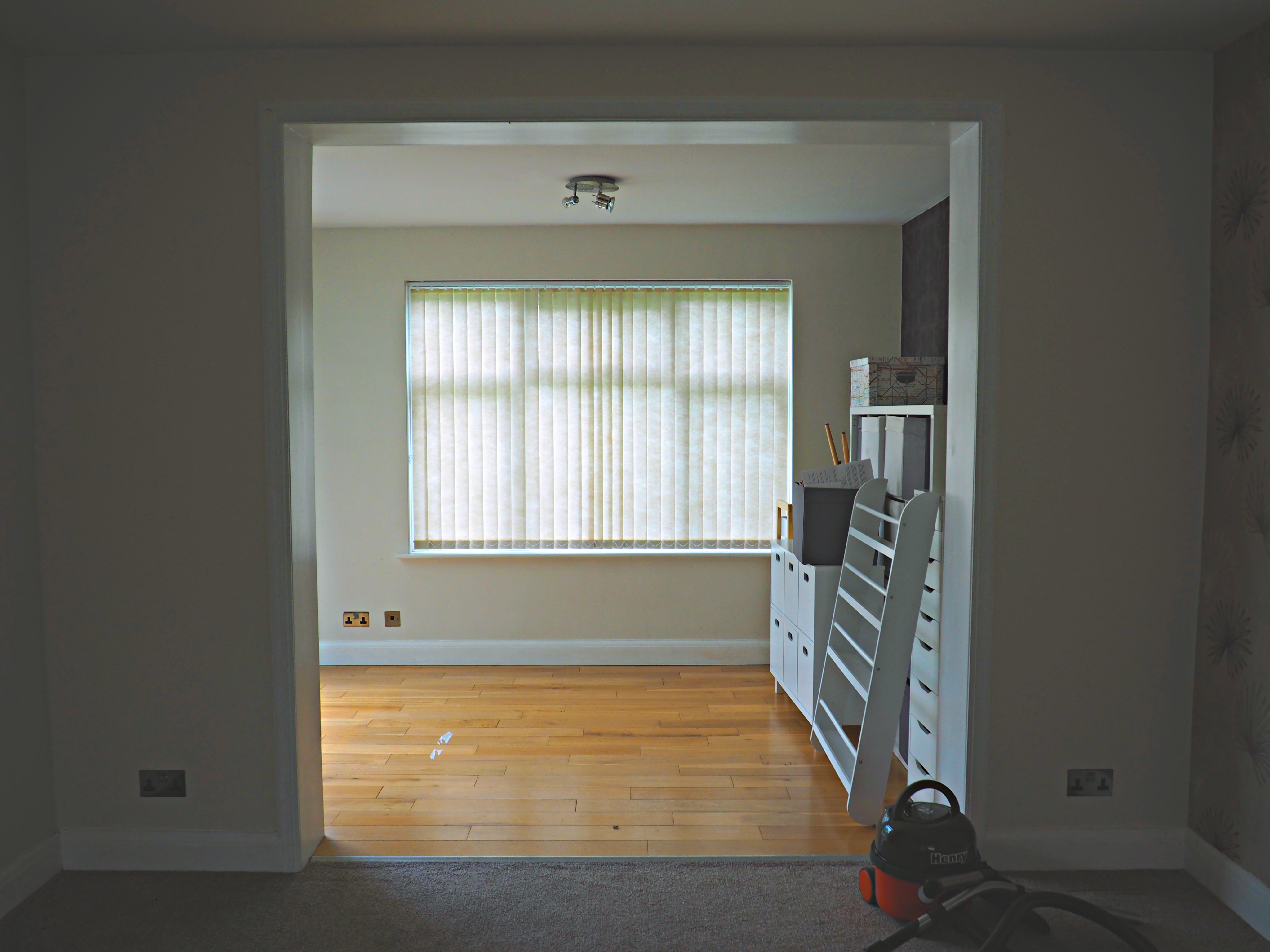 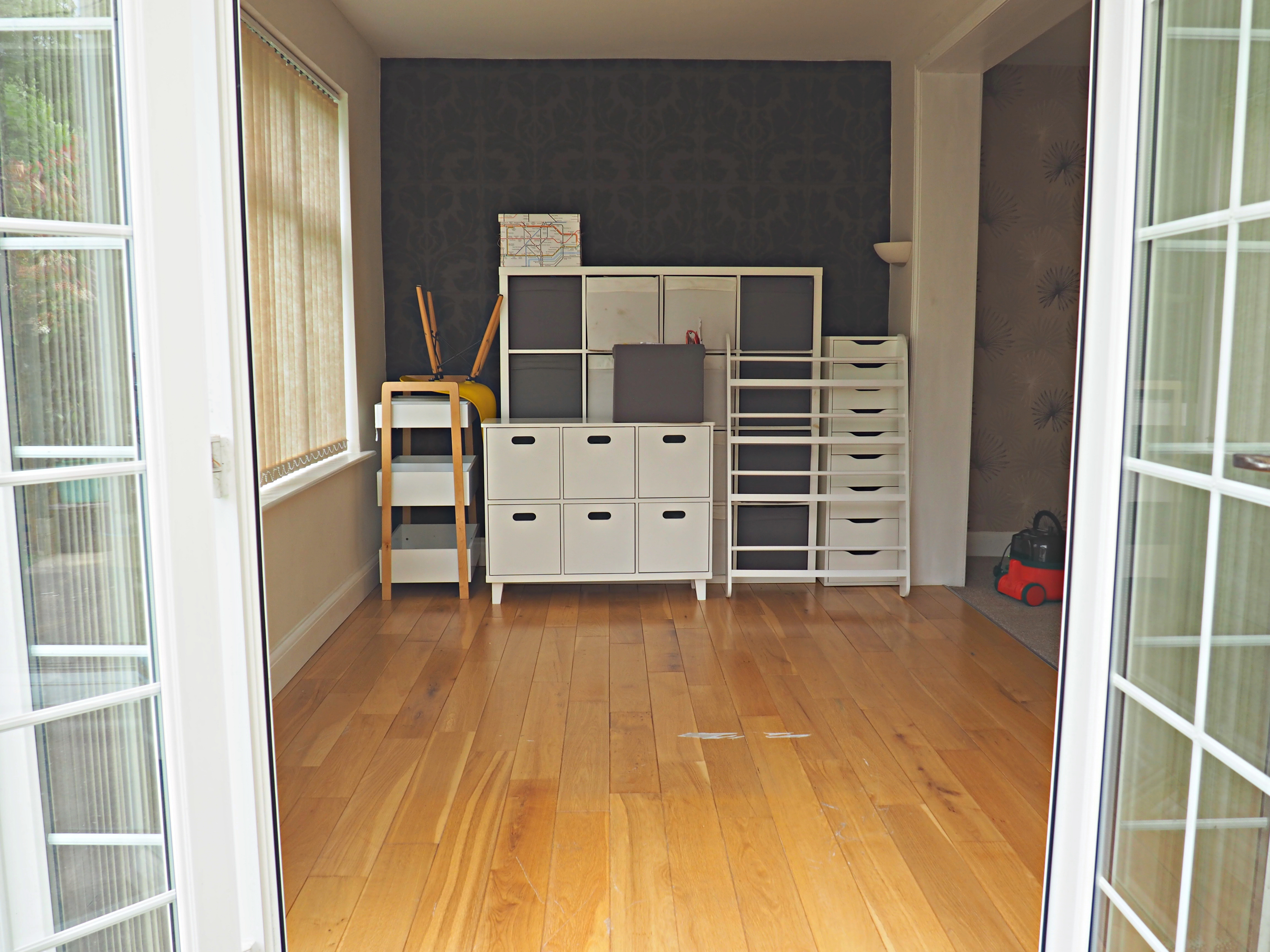 These two rooms have really surprised me, in as much as we’re not using them for what I thought we would! I assumed that the middle room would house our dining table and be the traditional eating space, and that the back room would be another hang out space or a play area. We’ve actually swapped the uses of the rooms around for a few reasons. One, the middle room has carpet running through and we didn’t want kids dropping food all over the floor whilst eating, so decided that the floor in the back room would be more suitable as it can wipe and mop clean. Two, the back room has so much light being an extension- perfect for eating together, doing homework, and drawing/craft activities. I love the fact that there are double doors leading out onto the garden from this room and it’s already becoming such a nice place to eat together. Three, by not having a dining table in that middle room it really opens it up and makes the downstairs look huge and flows much better. The downside is that the middle room is basically becoming a play room for Arlo with so many toys in there, but I’m thinking this will improve once the kids bedrooms are decorated and the toys can go up there the majority of the time, to be brought down as-and-when he wants to play with them. Decor-wise the back room is going to be kept nice and bright (the black patterned wallpaper will go), but with the middle room I’m just not sure. My gut says maybe keep this white-and-bright too as being the middle room it’s quite dark, but then again I quite fancy F&B Oval Room Blue or something a little different. I think some paint testers will be needed! 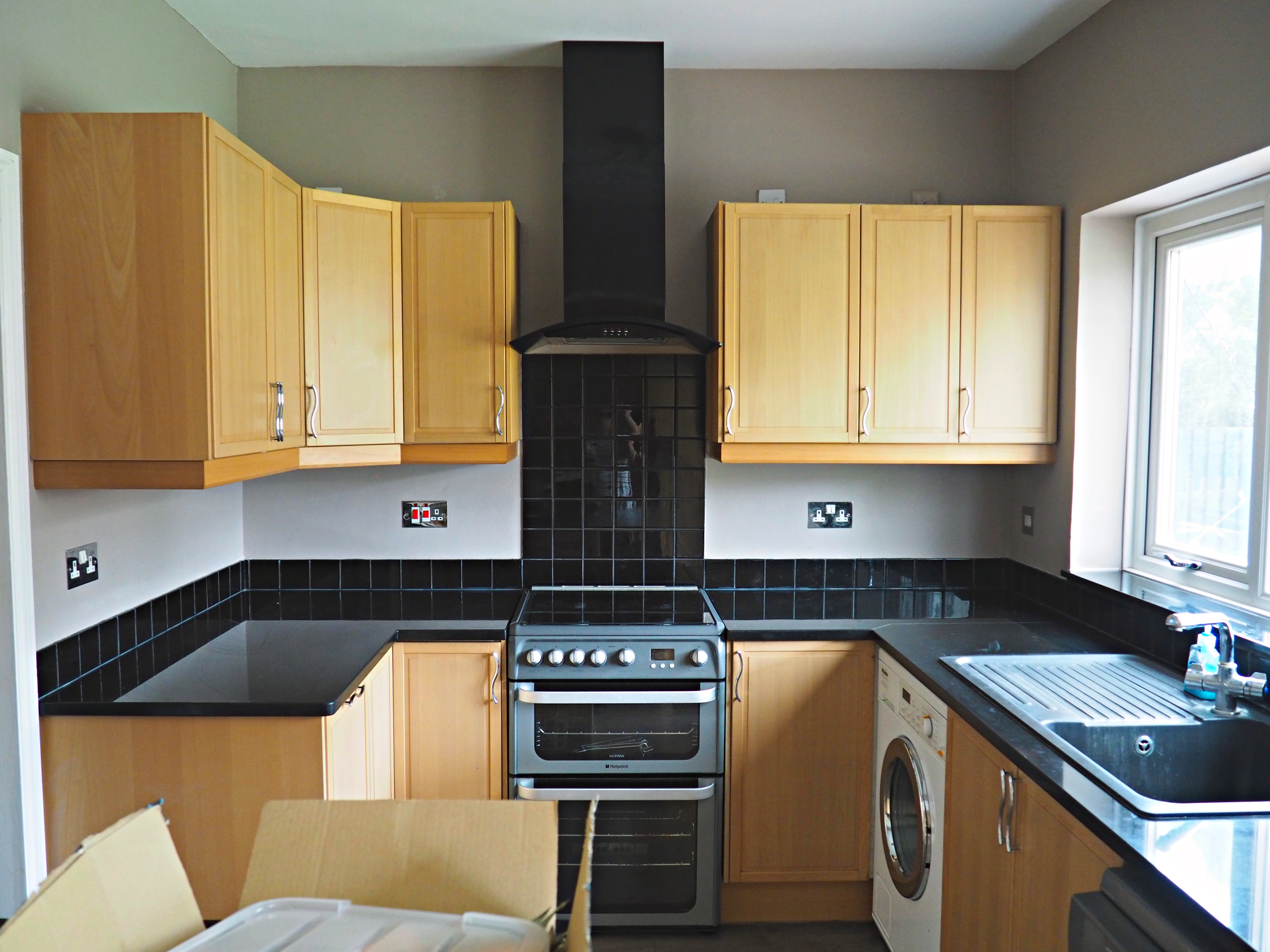 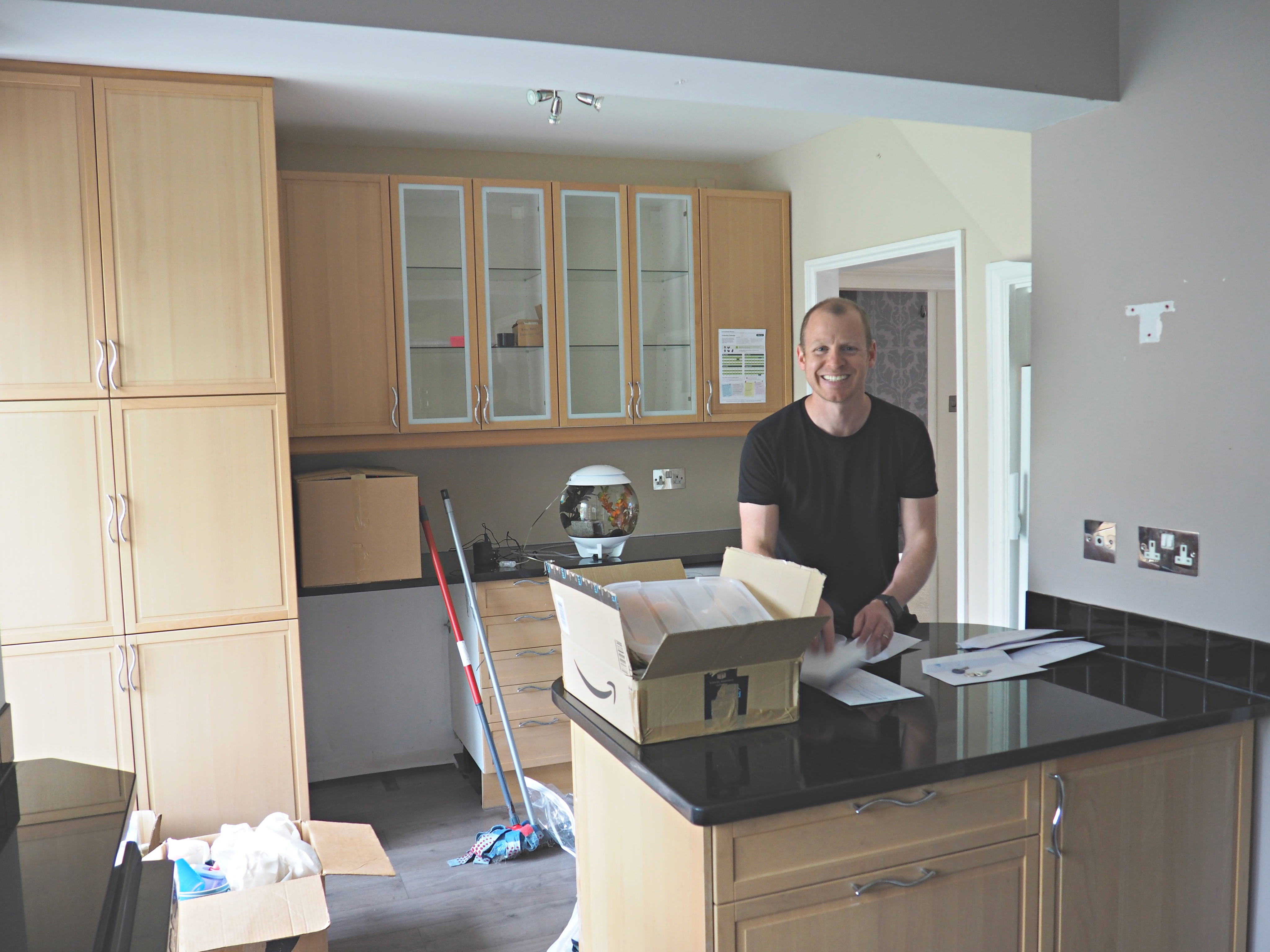 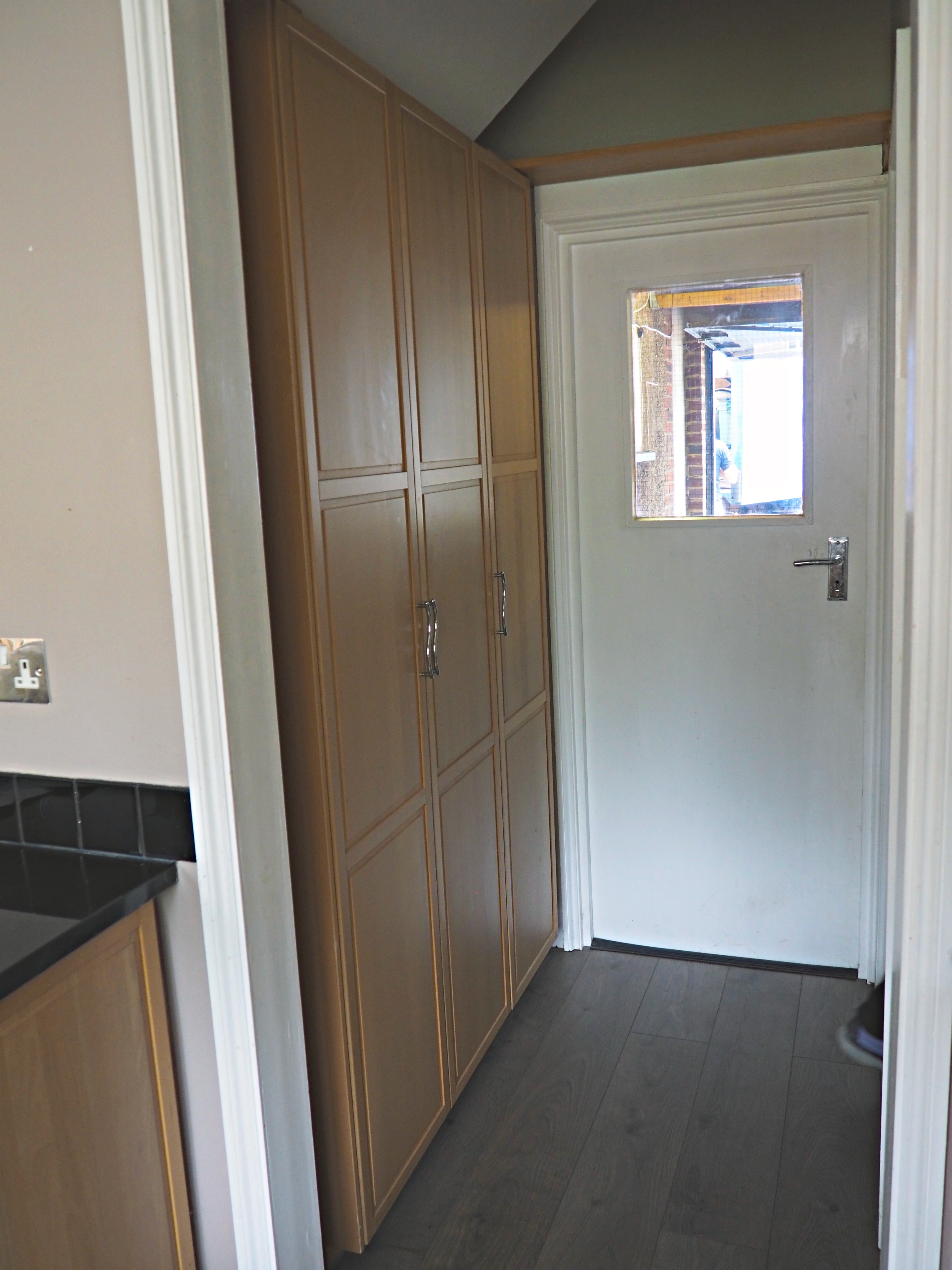 The kitchen has been our biggest ‘sacrifice’ when it’s come to moving as our old one was SO lovely. Still, it’s really not that much of a sacrifice and it’s still a really decent size with plenty of storage (hello, walk-in pantry area!), although it’s not really to our taste. As we’re going to have to live it for a while before we can do the extension we’d like to do, I’m going to give it a mini makeover I think and paint the doors and put some new handles on them, plus paint the kitchen walls a brighter shade (and the moment they’re a very dulling coffee-sludge colour). I also want to take down the kitchen cupboards above the cooker, re-tile the whole area and add open shelving there to make things look more spacious. The flooring is actually pretty decent which is good, and the appliances are too, although we’re going to try and shave some space from either side of where the current fridge is so we can fit our good-old Smeg.

Off the kitchen is access to our garage and a large downstairs loo, and there are double doors leading out to the garden. Whilst there’s not room for a table, there’s a decent-sized breakfast bar and island in the middle of the kitchen.

Linking all the rooms up is a large hallway, and at some point we’d like to knock through to the garage to create another reception room or playroom for the kids.

So there you go, there is the downstairs of our new house! It really needs some personality injected into it but I think once we’ve cracked on it will somewhere pretty amazing.

See some more of my interiors posts