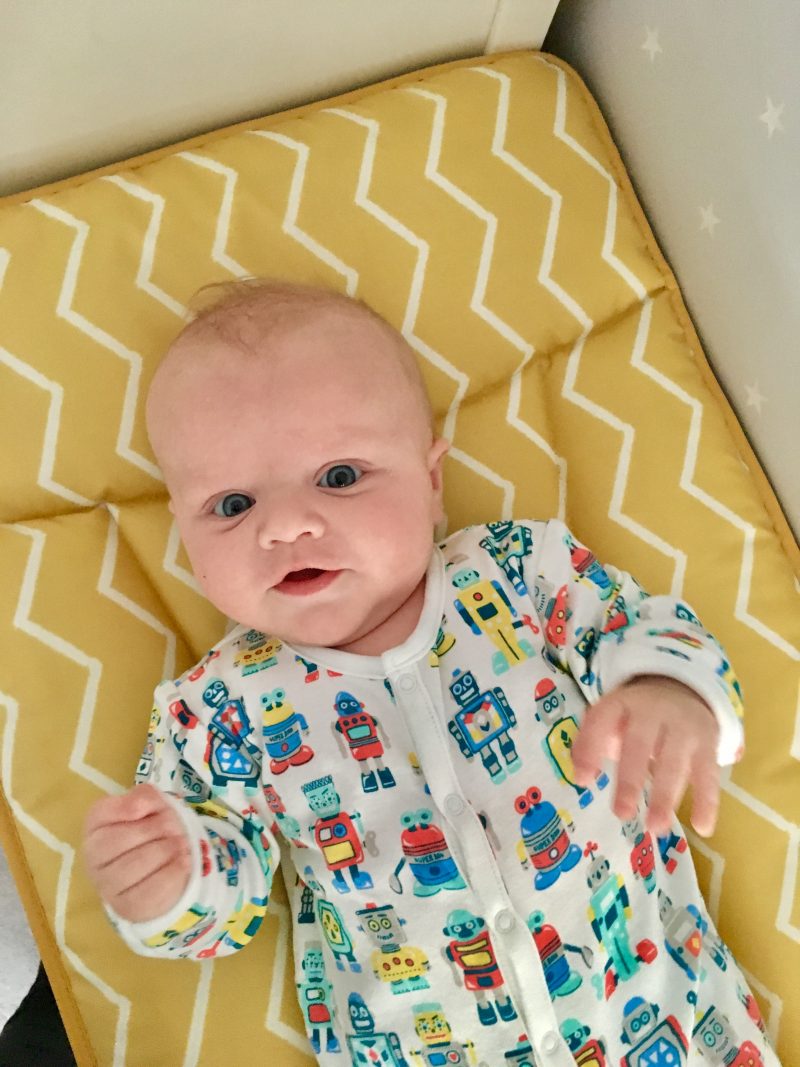 So Arlo is now 12 weeks old, and we are starting to get more into a day-to-day rhythm. Not a strict routine as such, but what with the older two children going back to school, we are getting into more predictable nap times if at home, and he now goes down in the evening to sleep for the night (bar a couple of feeds), waking for the day between 6 and 7am.

I know so many parents will say this about their babies, but he really is a joy to have around, and is so ridiculously laid back that it’s a real pleasure to spend my day with him. After his older brother who was a *little* bit more high maintenance, and then not being able to appreciate how chilled Sasha was as I had, essentially, two babies to look after, it’s wonderful to have some time really enjoying the baby era again. I think because I know he’s our last one (most likely!), I really want to milk this time with him. He really is a ‘bonus baby’ and I feel so lucky every day.

That’s not to say it’s without it’s challenges. After having a year with both children in school, so a whole heap more time to focus on freelance work, I’m suddenly back to trying to squeeze in as much as possible during nap times, which sometimes works well, sometimes doesn’t. Whilst I can do work in the evening, I’m not naturally a ‘night owl’ when it comes to this, and by the time all three children are in bed I’m usually so knackered that I’m really not in the mood for writing. It is becoming a bit of a juggle, and even with the big ones back at school, I’m beginning to feel stressed and a little behind. Which I really don’t want as I do want to enjoy this little pickle as much as possible. I’m sure we will sort something out, and I plan to sit down tonight and really plan my week next week- maybe 2 days ‘in’ during the day and working like a maniac during nap times, and then 1 or 2 evenings where I really sit down and focus, even for a couple of hours once the children are in bed.

Anyway, what can I say about Arlo?

At 12 weeks, he’s so alert when he’s awake, and really enjoys playing on his mat and grabbing and hitting at all his toys. He is so smiley, and this past week has started to chuckle at the little things you do to make him laugh, which is just awesome to see (I challenge anyone who’s heart isn’t melted by a laughing baby!). He loves his bath, and really kicks and wriggles in anticipation of this when you lie him naked on the bath mat. He actually doesn’t mind tummy time, but I’m wondering if I should be concerned or not yet as he appears to have no interest in actually pushing up and lifting his head? He just lies there drooling and grinning whilst trying to push his bum in the air! I’m sure he will get there soon, but if not I’ll probably take him to get checked out. It’s funny, as I just can’t remember what F & S where doing at this age, so even as a mum 3rd time around with more confidence, you still worry all the same.

Despite being largely very chilled out, Arlo can get VERY cross when he’s hungry, and goes from 0-100 in about 10 seconds- he definitely keeps us on our toes in this area, but now he’s a bit bigger we have more of an idea as to when he’ll be peckish. He’s a great feeder, and so far sleep-wise we really can’t complain too much, as he usually wakes once to be fed during the night and then goes back to sleep. So far he has slept through once until 6am (so he definitely has potential!), and the other night until 5am, so I’m hopeful it won’t be too long before this becomes a more regular thing. He still sleeps in the Snuzpod that attaches to our bed, and I’m so glad we got this now as it means we can reach over and settle him quickly as needed i.e. still half asleep!

We love going for walks which is definitely helping in my quest for managing 10,000 steps a day, and I might start going to a couple of local baby groups soon, just for something to do and to get out and about more. With wanting to get work done when he sleeps, the temptation is to stay in, but I know that it will be good for me to have a break too sometimes.

His brother and sister still adore him, with Freddie often stating “Arlo is the best baby in the whole wide world!”- and who are we to disagree?

I can’t wait for another 12 weeks of this little chap!

See here for newborn Arlo and Arlo at 4 weeks.