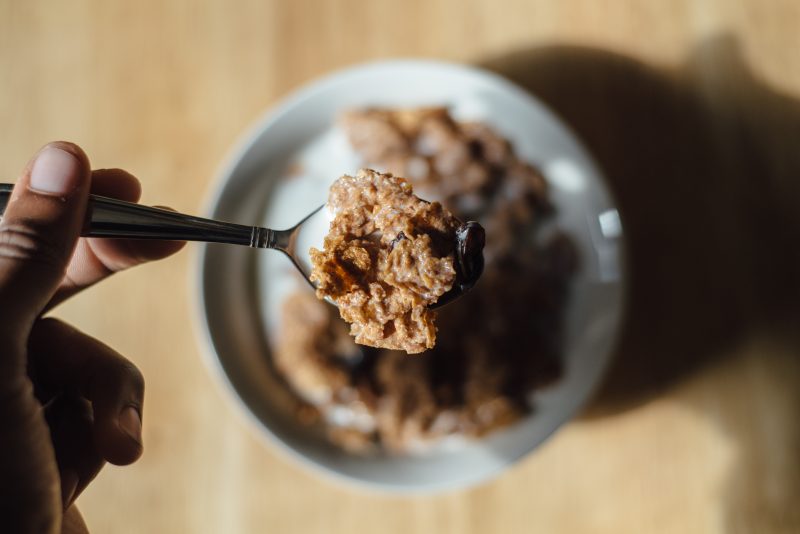 As cheesy as it sounds, I’m a bit believer in the old saying that breakfast is the most important meal of the day. I think it gets your brain working, and obviously gives you energy for get-up-and-go for the day ahead. I think that even if you’re not someone who can eat as soon as they wake up (and these days I’m one of those people, mainly because I’m awake with someone so damn early!), that it’s important to have at least something before you crack on with the day’s tasks.

Depending on our plans for the day, breakfast can be a wonderfully relaxing experience, or a rushed “go, go, go!” kind of one. Our weekend breakfasts tend to be lovely, family affairs, with poached eggs and bacon brunches after swimming on a Saturday, and often pancakes with various toppings on a Sunday (Freddie’s favourite!). During the week it’s a bit more hectic, as everyone has to be fed, dressed and ready to fly out of the door by 8.30am (7.50am on Thursdays when Sasha has gymnastics before!).

On days like these we tend to have cereal and fruit, porridge with fruit and honey, peanut butter on toast, or, if I’m feeling particularly motivated, baked beans and cheese on toast (Sasha’s favourite!).

According to new research from local milkman service Milk&More, Brits are divided into five Breakfast Tribes, By mining its rich grocery shopping data, Milk&More reveals how different areas of the country choose to eat the most important meal of the day – and the differences couldn’t be more striking! I think on these days we definitely fall into ‘The Quickie’ category- have a look and see which one you think you fall into!

The five Breakfast Tribes and their respective foods are:

Apparently, residents of south-west London are far more likely to have an egg-based breakfast – indicating a penchant for a nutritious protein-filled start to the day.  This part of the country purchases four times more eggs than any other. On the other side of the nation, South Wales is the epicentre of the great British fry-up, with the most number of orders for bacon.

The title for the healthiest region of the U.K. goes to Hertfordshire, with the county’s residents stocking up on fruit and veg, it might be assumed that this county is keen on smoothies and fruit salads. Those living on the Isle of Wight  are the most likely to consume a sensible energy-boosting breakfast, which provides a steady flow of energy through the morning. The demand for oats are the highest in this area, with traditional oats twice as popular as the flavoured varieties.

It seems the residents of Kent and Essex lead some of the busiest lives in the country, as reflected in their propensity to purchase on-to-go breakfast items. These regions are the joint top purchasers of bakery goods (living on the SE London/Kent border, I am definitely keen on a naughty pastry from time-to-time!). Classic yet quick breakfast options like cereal and toast are especially popular in Kent, as well as in Somerset where the residents also order more milk than any other region.

Milk&More also asked the public about their favourite type of breakfast and how important it is to them. The results show The Quickie breakfast to be the most popular, with half (50%) of respondents citing cereal as their go-to choice. Having breakfast is seen as a must, with three quarters (75%) of respondents claiming they would not feel energised or set up for the day without it.#

Do you have breakfast every day? What do you eat and whereabouts in the country are you?