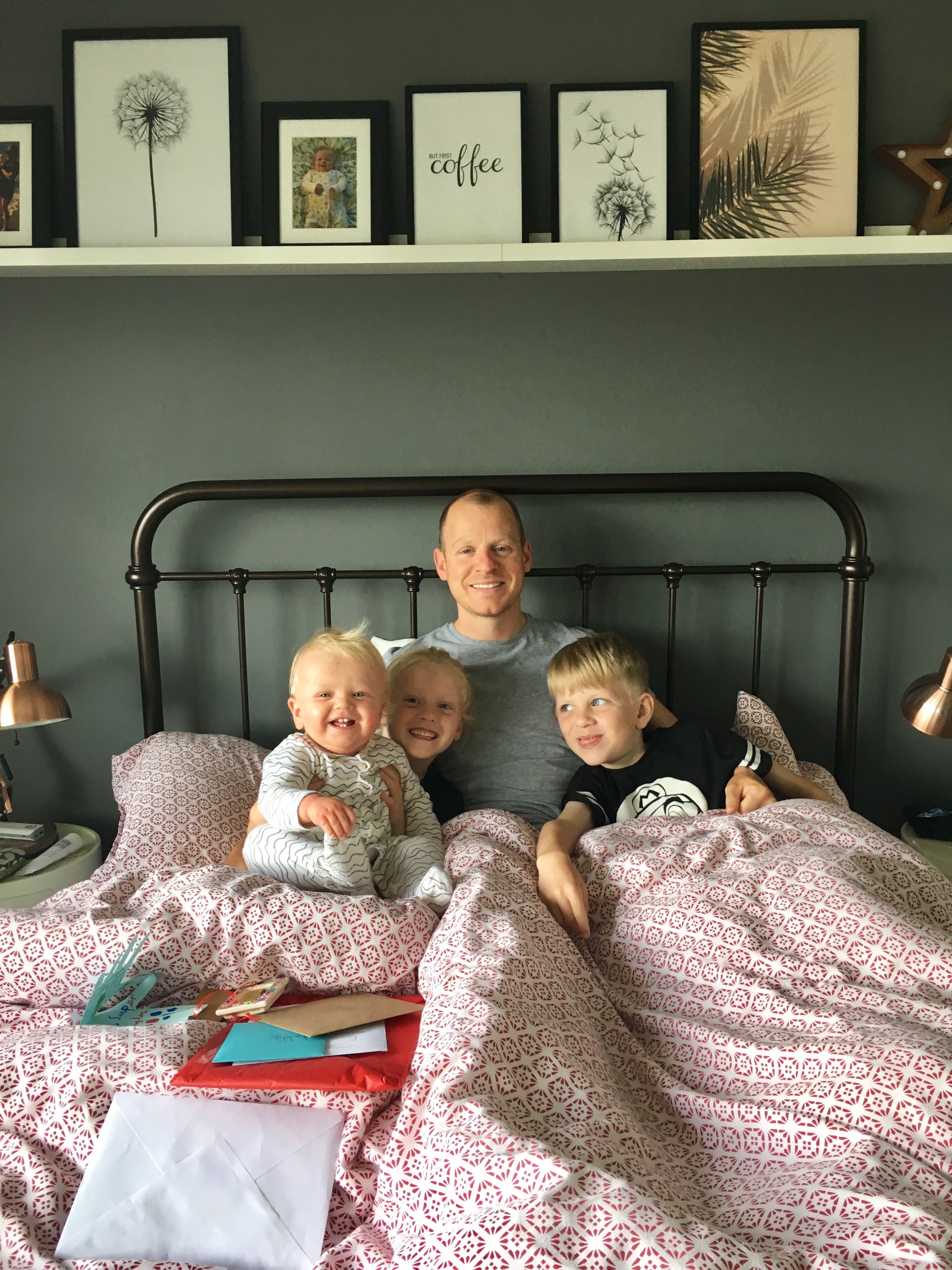 Adam with our three rascals on Father’s Day

Arlo turns one next week, and whilst it sounds cheesy, I can honestly say that this year has flown by, probably because life is more hectic these days. That’s not to say the ‘firsts’ of his first year have passed us by or that we haven’t stopped to appreciate them anymore than with the other two. If anything, I think we’ve cherished them more, because of the gap that we had before he arrived, and also because we know that he’ll be our last baby.

It’s kind of bittersweet I guess, because whilst I’ve never been a HUGE ‘baby’ person, always preferring the age and stage where they are walking, talking, little people, at the same time knowing you won’t experience something ever again with a child is quite a weird feeling, and tinged with a little sadness. (and no, we aren’t having any more!)

So what has this year been like with 3 children in tow?

In all honestly…. it’s been absolutely fine, easier than I imagined in many ways.

Arlo really is such a joy, and we’ve been hugely blessed to have such a happy, laid back, healthy baby. We always thought we’d stop at two children after having Freddie and Sasha within 15 months of each other, and got rid of ALL our baby gear (so annoying!), but I guess in the back of my mind there was always the tiny voice that said we might have another baby at some point. Since he’s been here, I can categorically say that I am ‘done’, and it’s actually quite a nice feeling to be 99% certain, that all going well, our family is complete.

Personally, I feel at full capacity when it comes to juggling everyone’s needs, ferrying kids to clubs and activities, and have finally started to gain back some sleep (OMG THE SLEEP).

I’m not going to lie though, 3 children IS more hard work than having 2, despite what people say about them just slotting in. I guess the latter is kind of true, a 3rd child does have to go with the flow more, and poor Arlo does get carted around to various clubs and school runs (he’s VERY sociable as a result, I’m sure). But it has been much more of a juggling act to get everyone fed, everyone bathed and to bed, and also to help the big two with maths and spellings etc. We’ve had to have almost military precision when it comes to working out who needs to be where, and if anyone can have the baby when it’s an event that’s unsuitable for him. We are very lucky in that we have lots of family help and support, and I must admit that I possibly would’ve thought twice about having another baby if we didn’t have this already in place.

I have to admit though that the sleep hasn’t been great this year overall! Arlo is our worst sleeper so far, and whilst he’s been generally sleeping through for the past couple of months, he’s still not consistent, and we’re never totally sure what kind of night we’re going to have. Lack of sleep when you have other children is killer, and I know I haven’t always been the best Mum to the others when we’ve had a shitty night.

They are the only real negatives though, and I’ve actually been surprised at how much more laid back I’VE been with having another. Having been quite uptight and anxious about sticking to routines with the first two, I’ve been a bit more relaxed with Arlo, essentially keeping to a rough one but knowing that it’s not the end of the world if he’s not in bed by 7pm or had an exact 2 hours sleep at lunchtime. I’ve really enjoyed having a baby again, and because the big two are at school, I really get to enjoy him as if he was my first, but with the benefit of being more relaxed, and generally being a more experienced parent.

Freddie and Sasha are so good with him, constantly playing with him, and talking to him, and Arlo really has added another dynamic to our family. I hope the older two will feel blessed to have another sibling as they get older- only time will tell, but the signs are good so far!

I love having 3 children, and when I see them altogether I feel real contentment, and also a fair bit of FUCKING HELL I’M RESPONSIBLE FOR 3 HUMAN LIVES – but I wouldn’t have it any other way.

3 is definitely the magic number for us, and I’m so glad we decided to take the plunge.

How many children do you have? Would you like more? Do you have 3 already? I’d love to hear

See my other posts on motherhood