One of things I want to do more of this year is to just go ahead and book things as I see/read/hear about them (money dependent of course!), rather than dither and um and ah, and then discover that whatever I want to do is fully booked.

So when I saw a review on the lovely Jaime’s blog about her recent trip to Aqua Shard for a Mary Poppins afternoon tea, I instantly thought that this would be such a lovely thing to do for my Mum’s birthday last Monday, and went ahead and booked! I know Mum likes an afternoon tea as a treat, as every couple of years we treat ourselves to a Christmas version of one at The Ritz, so thought it would be fun to try another variation of a English classic, and you can’t get more English than Mary Poppins.

I was crossing everything that we would be lucky with the weather, and luckily we were- crisp, cold weather and bright blue skies made for an exhilarating view over London (we were fortunate to get an excellent table), and I don’t think the London skyline is a view I’ll ever get tired of.

Here are some snaps and a bit about our tea… 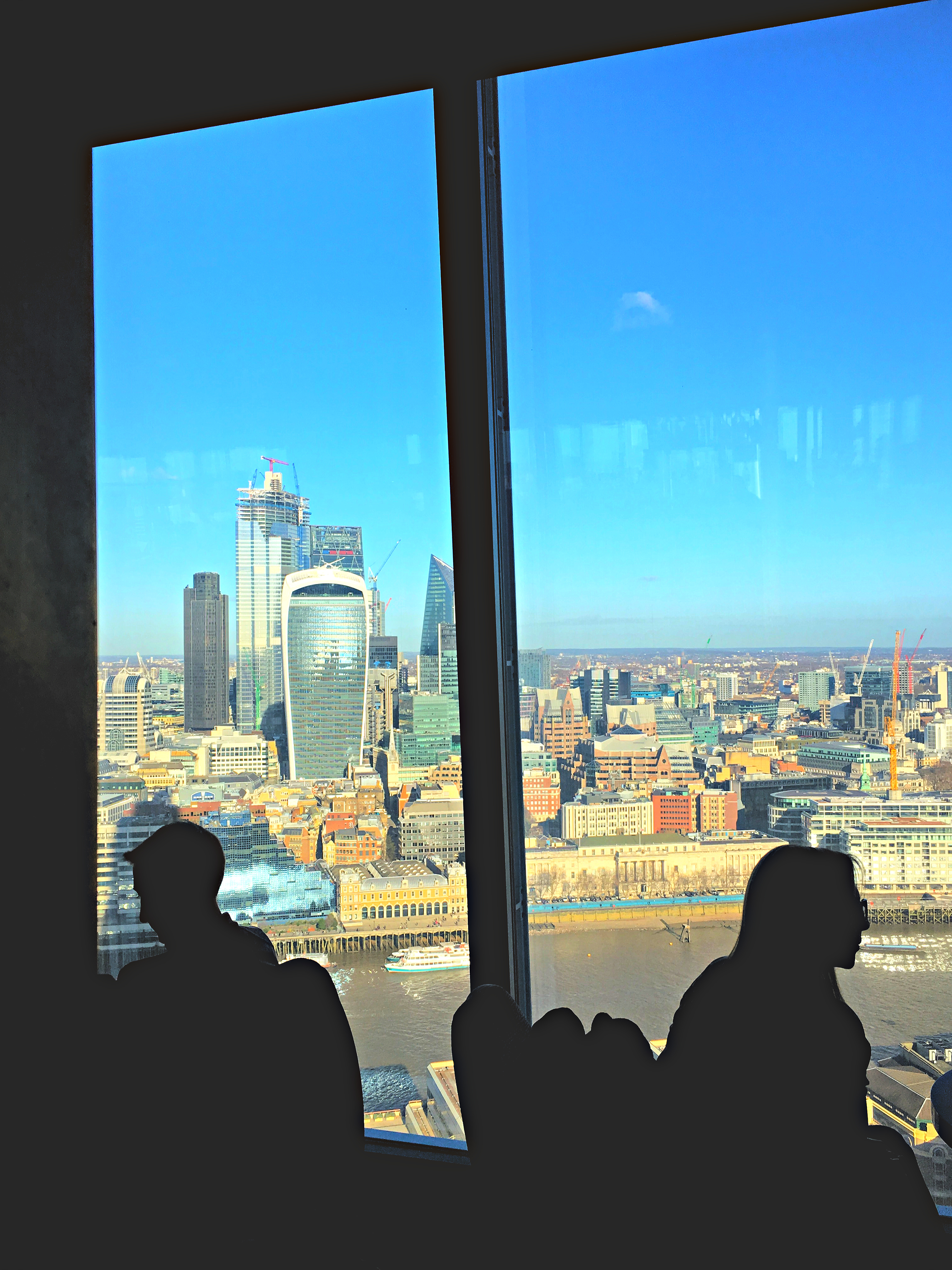 We decided to arrive a little earlier so we weren’t rushing and then were able to relax and have a drink for half an hour before our tea, so grabbed a spot near the bar. What a view! Being a Monday there were quite a few working types there before lunch, and I tell you what, I’d spring into work at the beginning of the week if I knew I had a client lunch or drinks here! 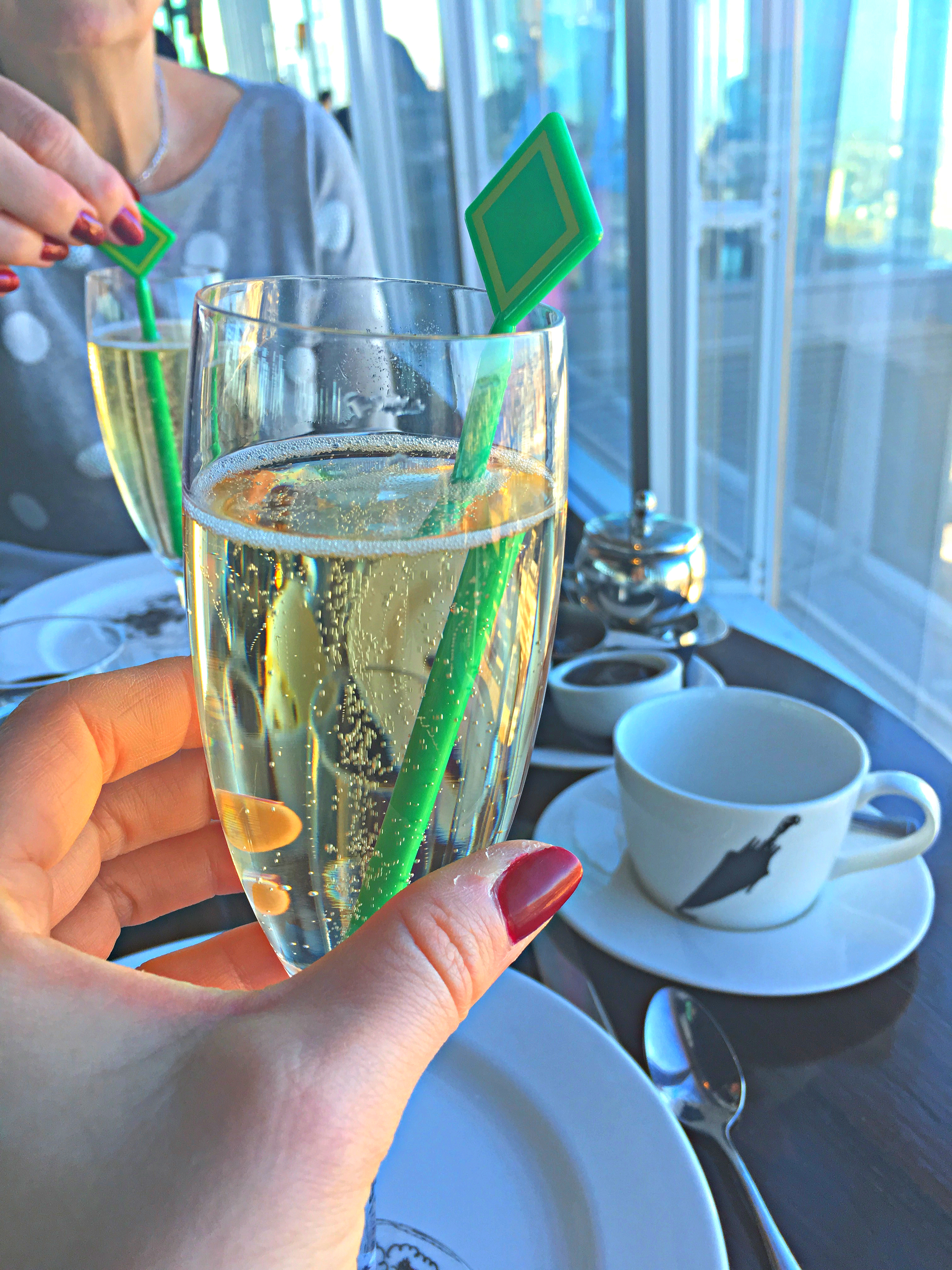 I decided to push the boat out and splash out on the champagne version of the Mary Poppins afternoon tea, where you get a glass of Verve Cliquot along with your tea- they even threw in an extra glass each as it was mum’s birthday, much to our delight. Very naughty on a Monday! Luckily Arlo was with my in-laws and Adam finished work a little earlier to have all 3 kids so we could make the most of our afternoon. 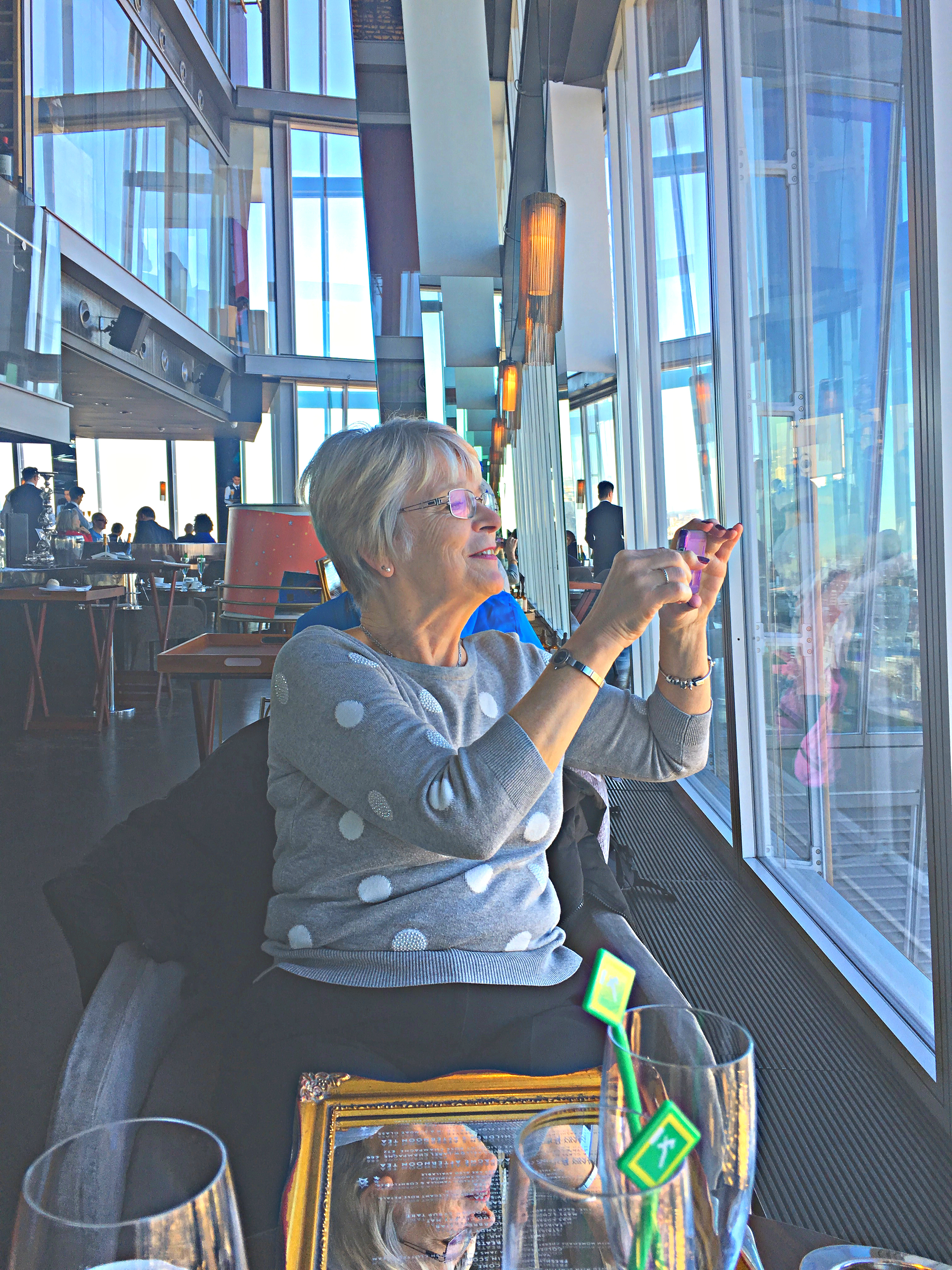 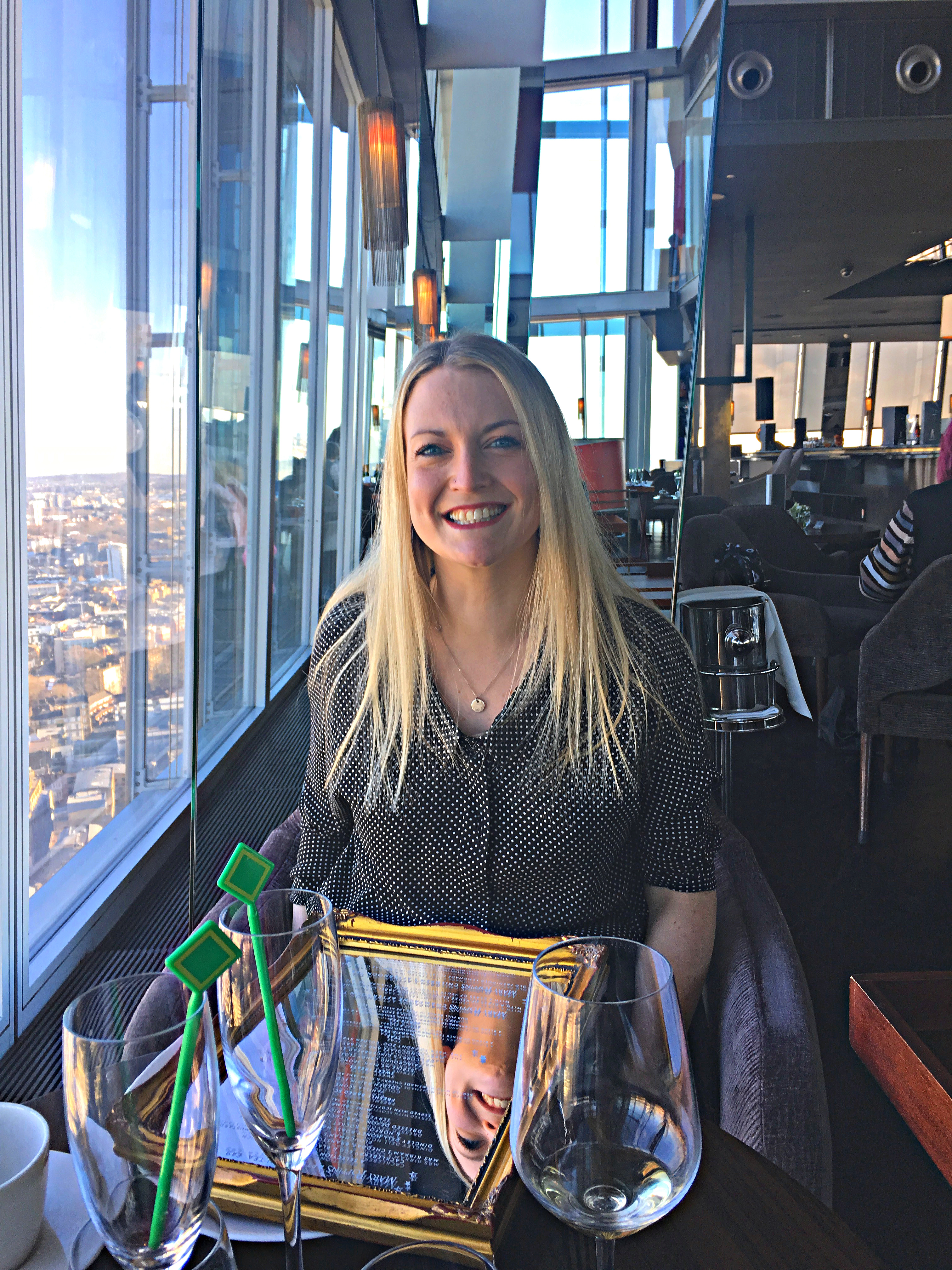 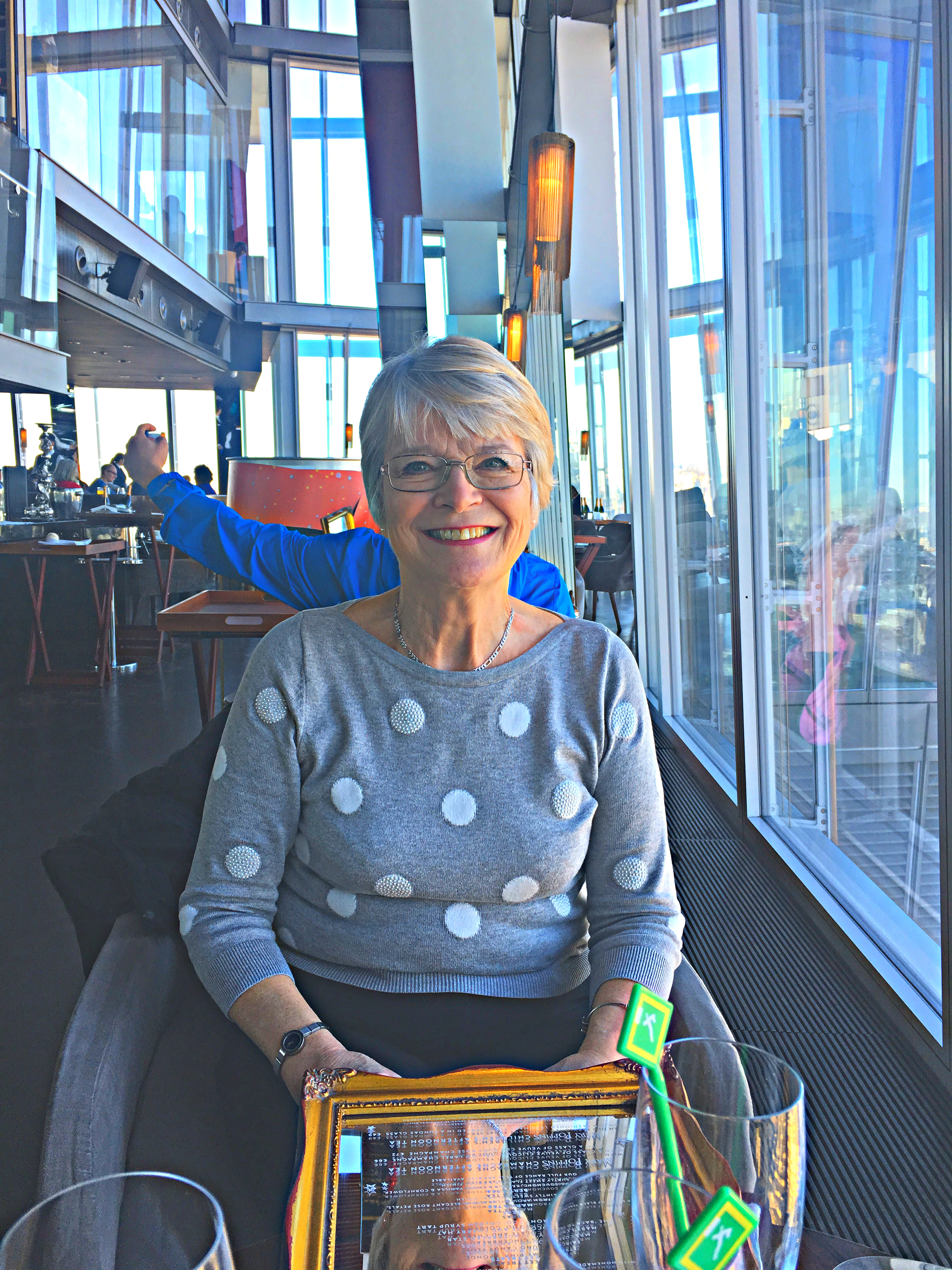 A great table (and I liked how they have an extra wooden table for the actual cakes, sandwiches and tea next to this one so you weren’t fighting for space). You can really get a sense of space from the windows and glass behind Mum and just how big the place is. It doesn’t feel cold, or too open though which is surprising- I think because the furnishings and ambiance is what I would call ‘homely sophistication’ (is that even a thing? I like to think it is!) it still feels relaxing. And no, Mum isn’t growing an arm out of her head, badly timed phone snap here from myself *rolls eyes* – that will teach me not to check my photos at the time. 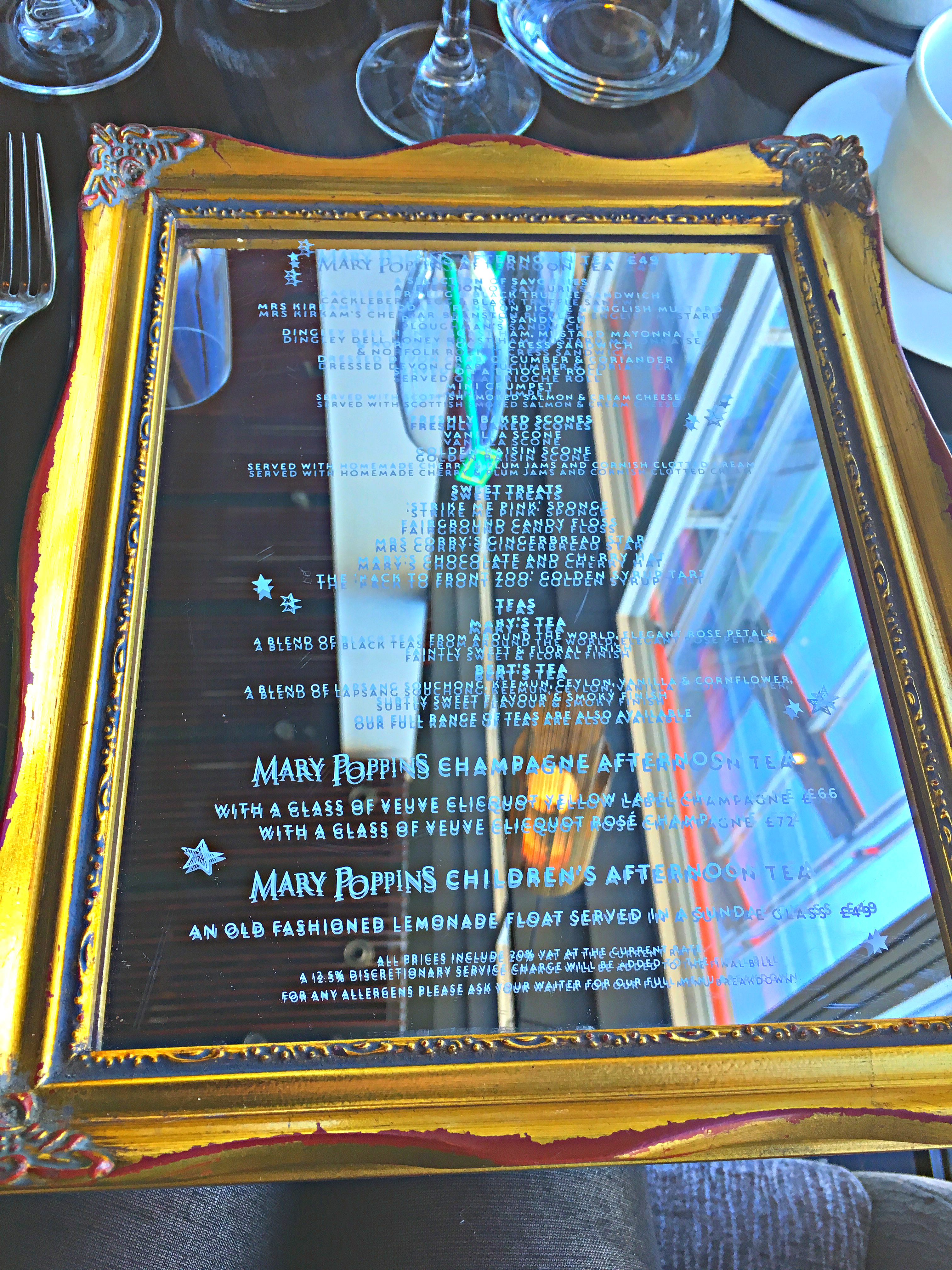 The menus, engraved on to antique-style mirrors were such a nice touch. The devil is in the detail as they say, and there were a lot of fabulously quirky details that nodded to Mary Poppins as you’d expect, but I have to admit to being more impressed than I thought I would be with the effort and thought that had gone into the styling of the tea. 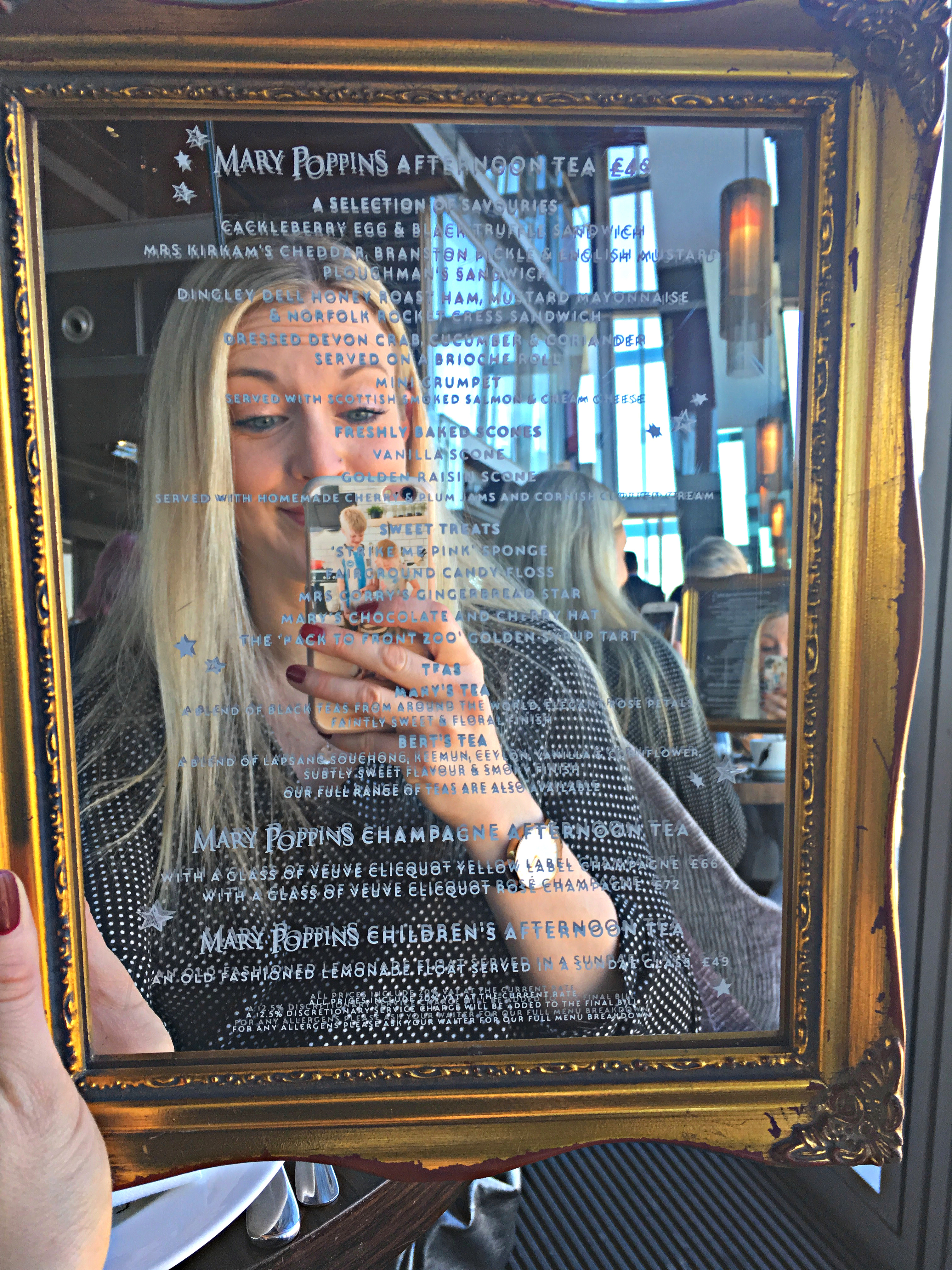 …and if you look carefully here, you can see exactly what kind of things were on the menu for the afternoon tea. You don’t get to choose as such (it all just comes out all together), but I believe if you have any dietary requirements you can speak to the staff (or email on booking) and they’ll do their best to accommodate. 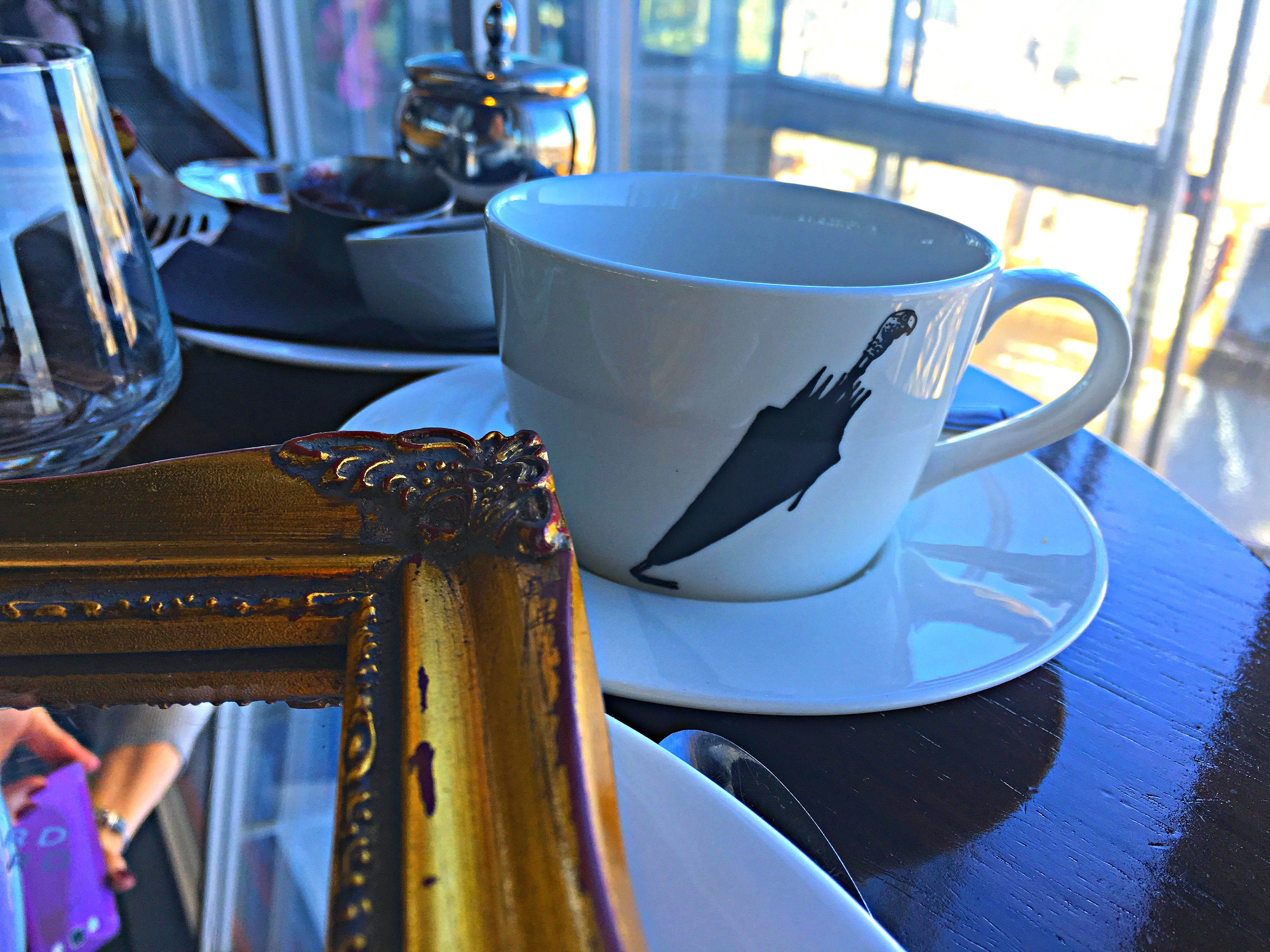 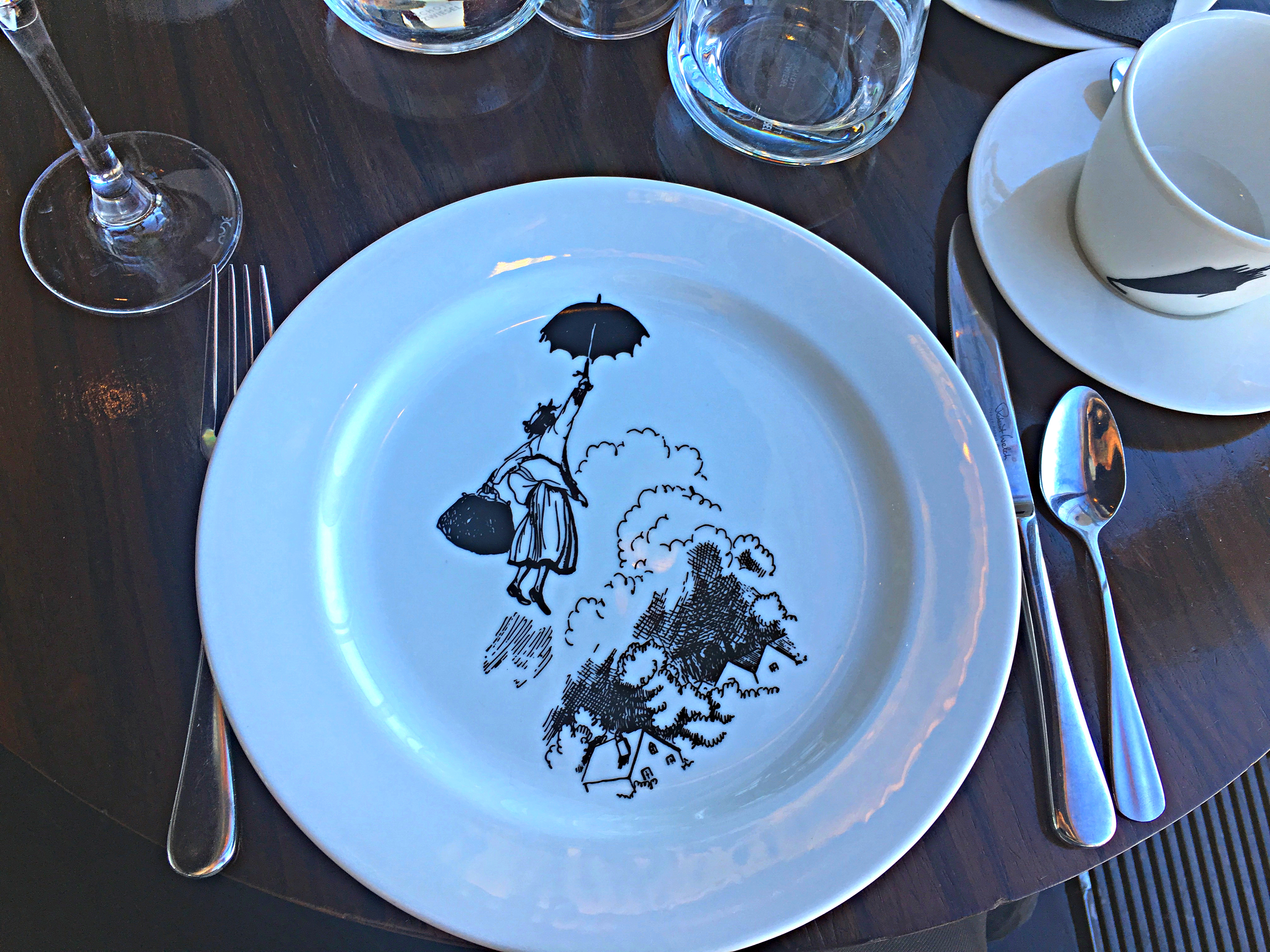 Absolutely love the crockery, very tempted to pinch the cup but I obviously resisted. 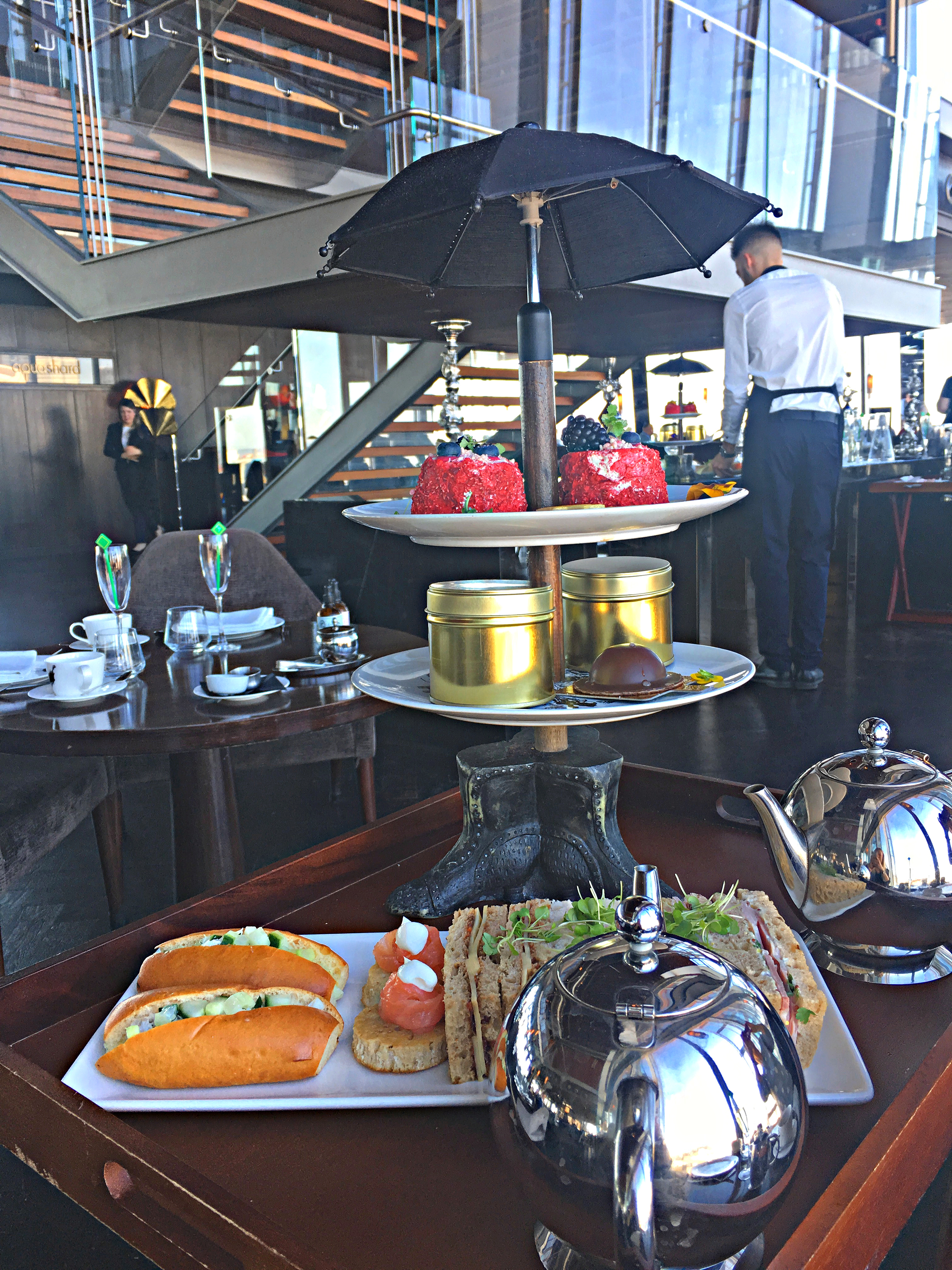 The cakes and sandwiches were served first, along with the tea (I mean, WHAT a cake stand?! Marvelous!), followed by the scones once the savoury items had been devoured. 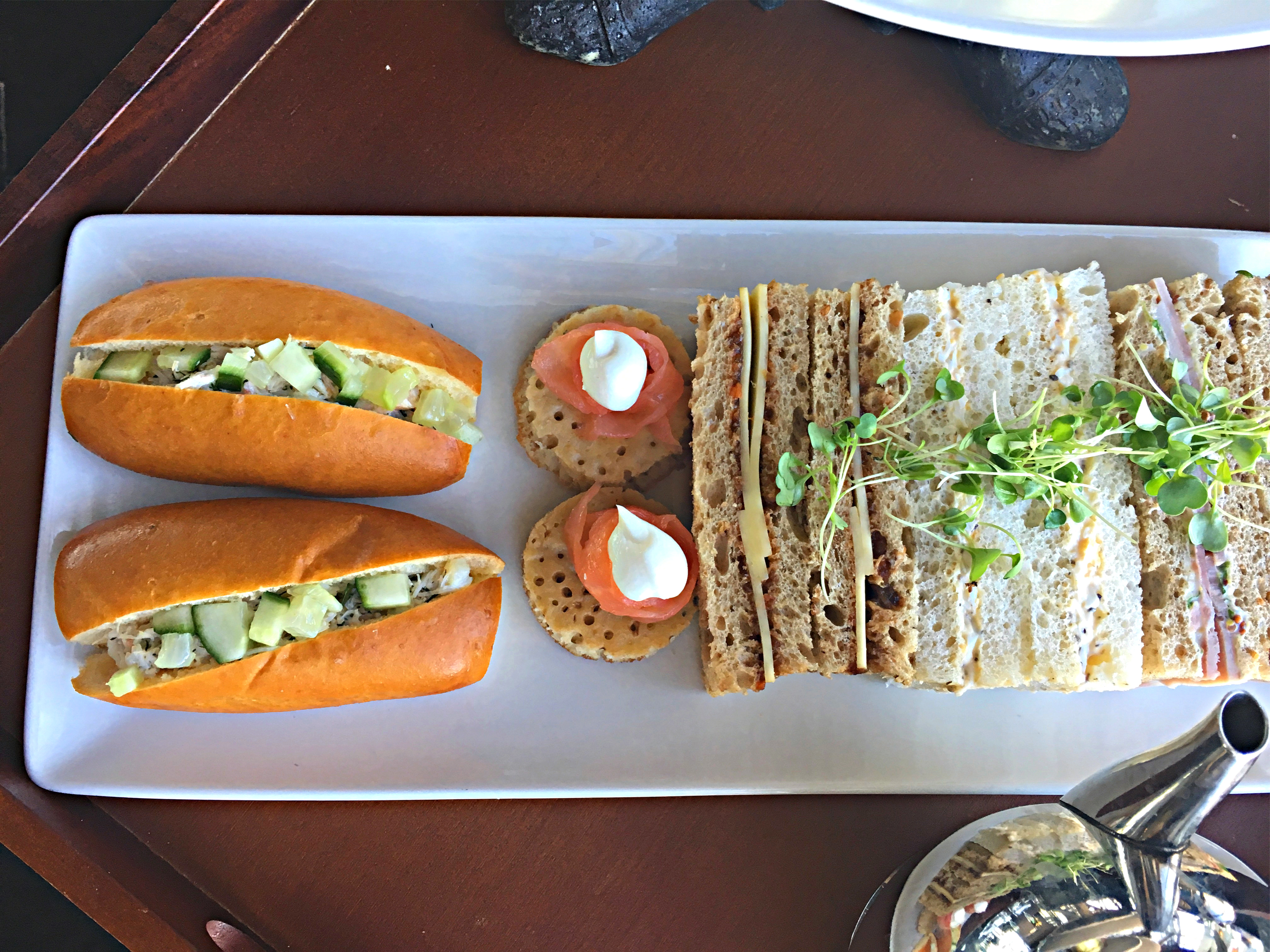 We filled our boots with the following: Crab and cucumber brioches, salmon and cream cheese mini crumpets, and cheese and pickle, egg and truffle and ham and mustard sandwiches. I’m not sure why buy sandwiches always seem to taste better with the crusts cut off! 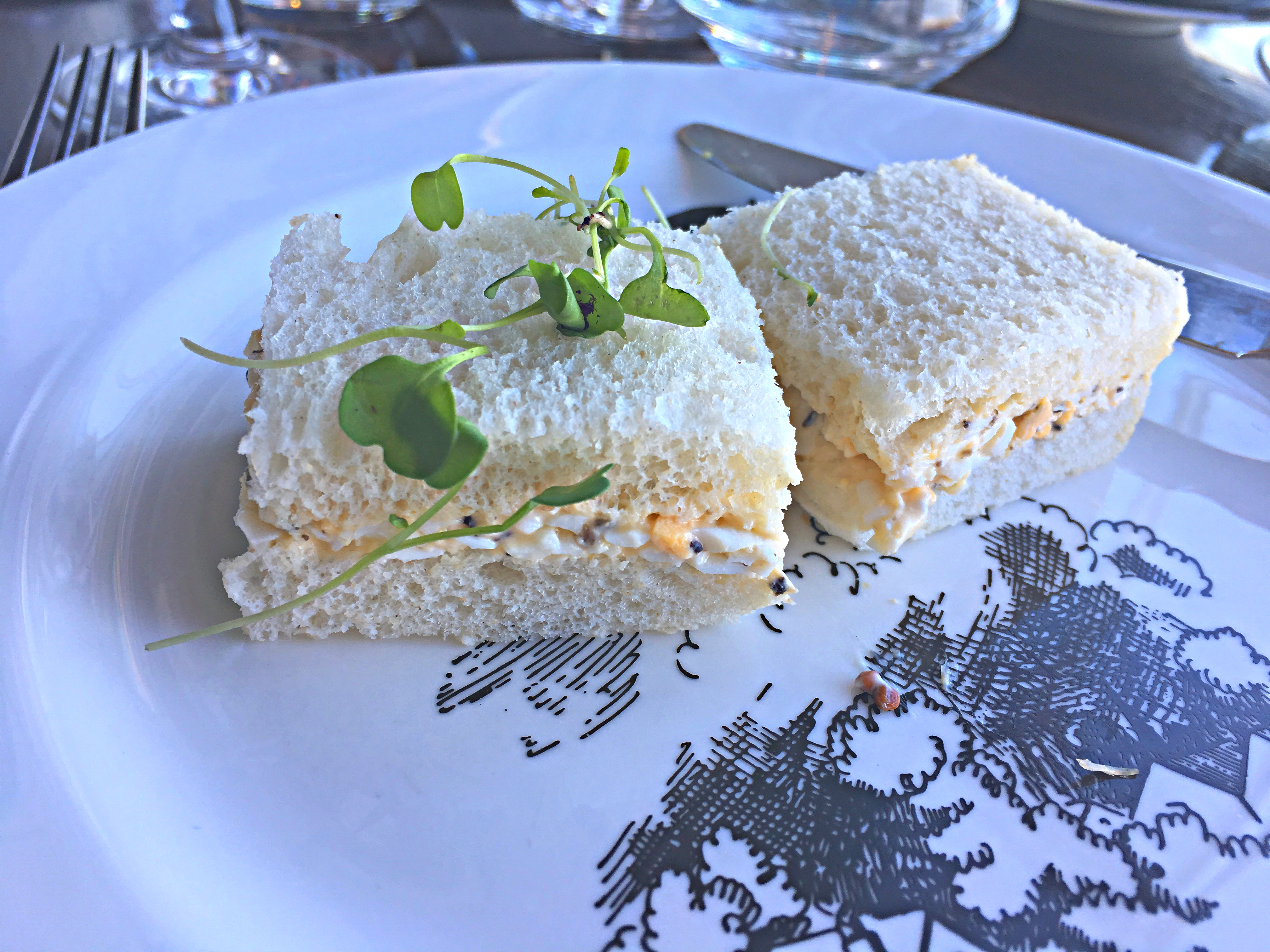 My favourite (along with the crab)- the egg and truffle, something I haven’t ever had as a combination before and it was just delicious. 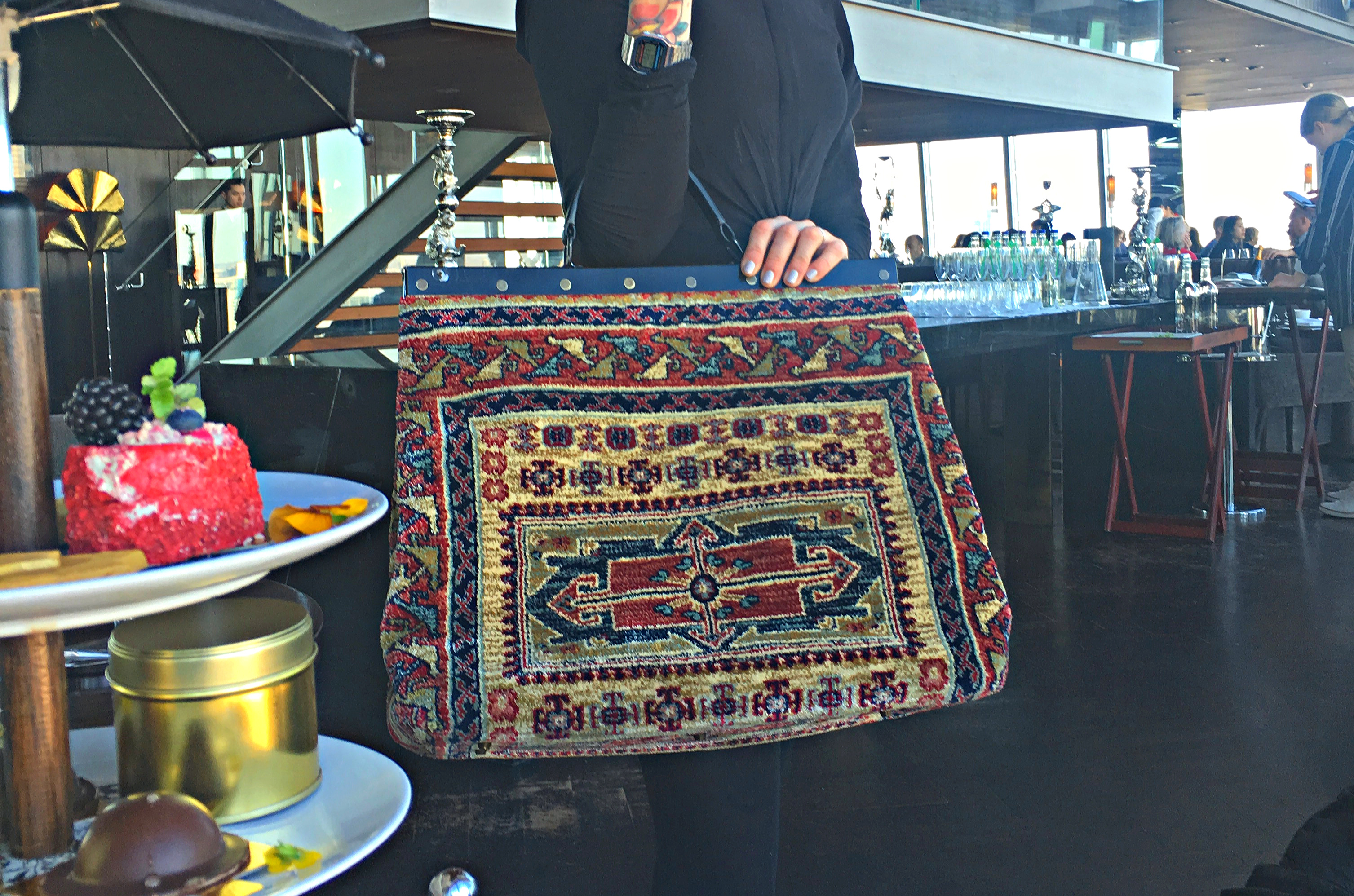 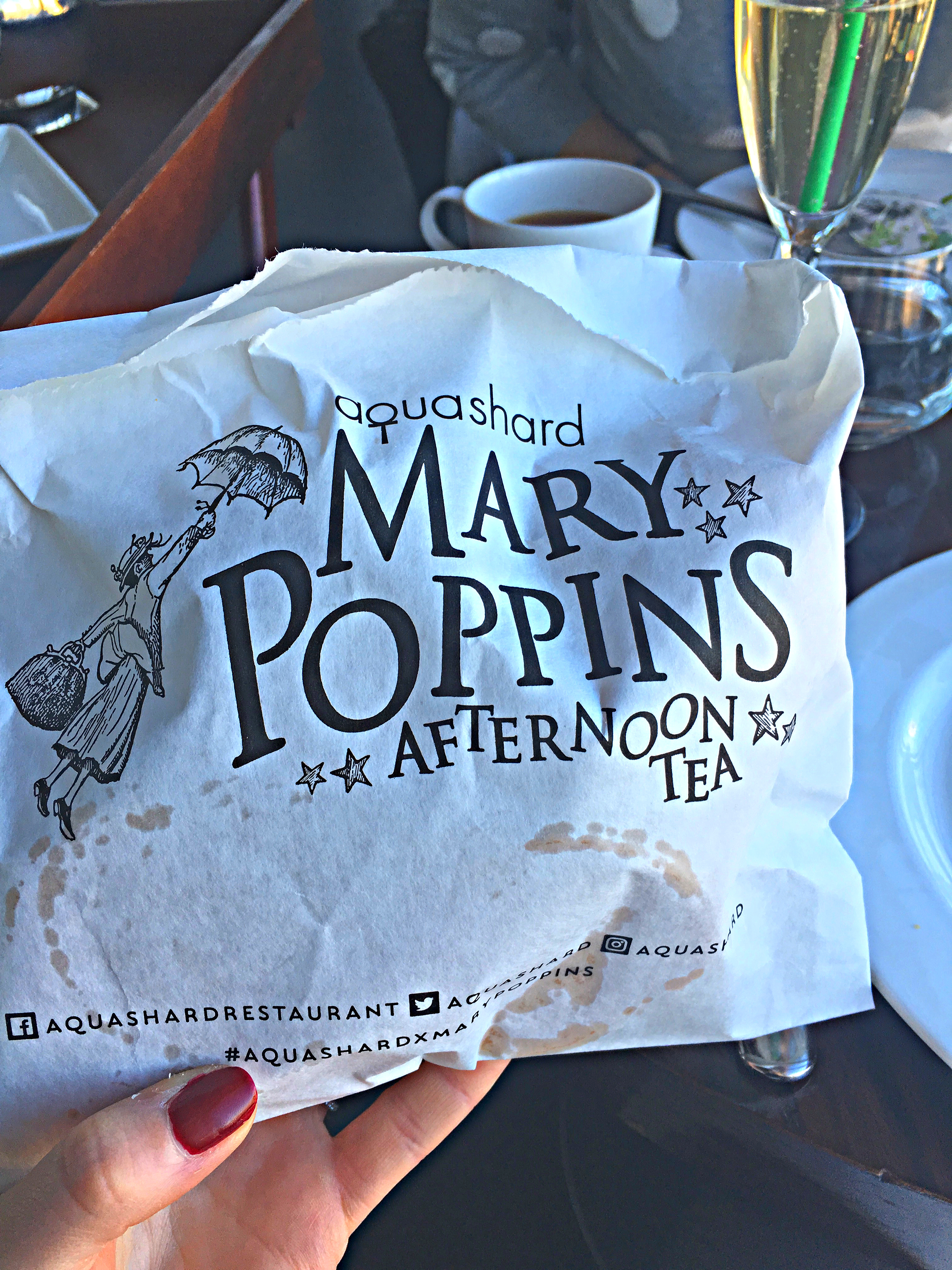 Now the following I LOVED- fresh-baked, warm scones, delivered right to our table in a Mary Poppins carpet bag! 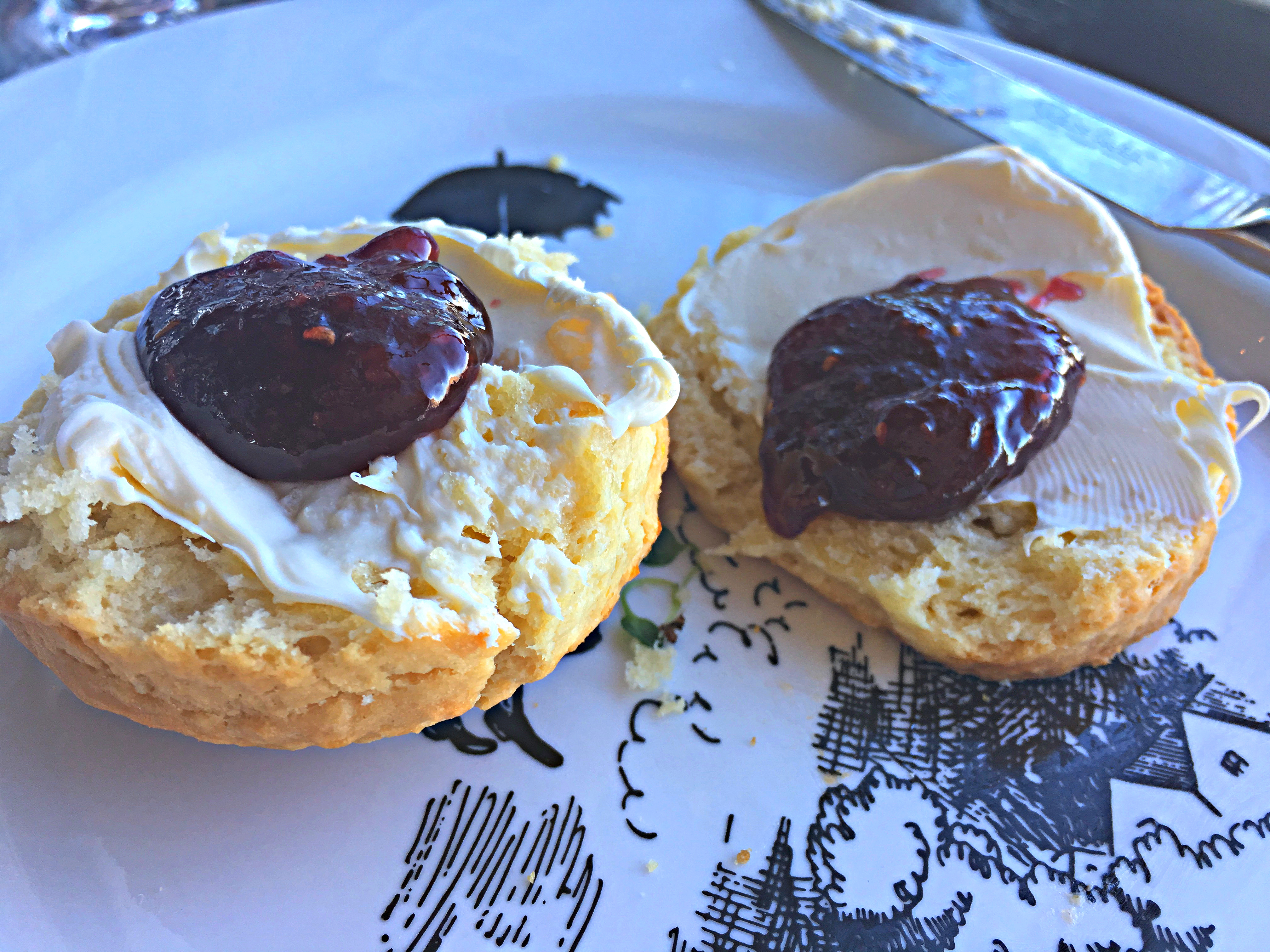 I think these are probably best scones I’ve ever tasted, even surpassing The Ritz ones (and that’s saying something). I’m definitely a jam-on-cream kinda gal. 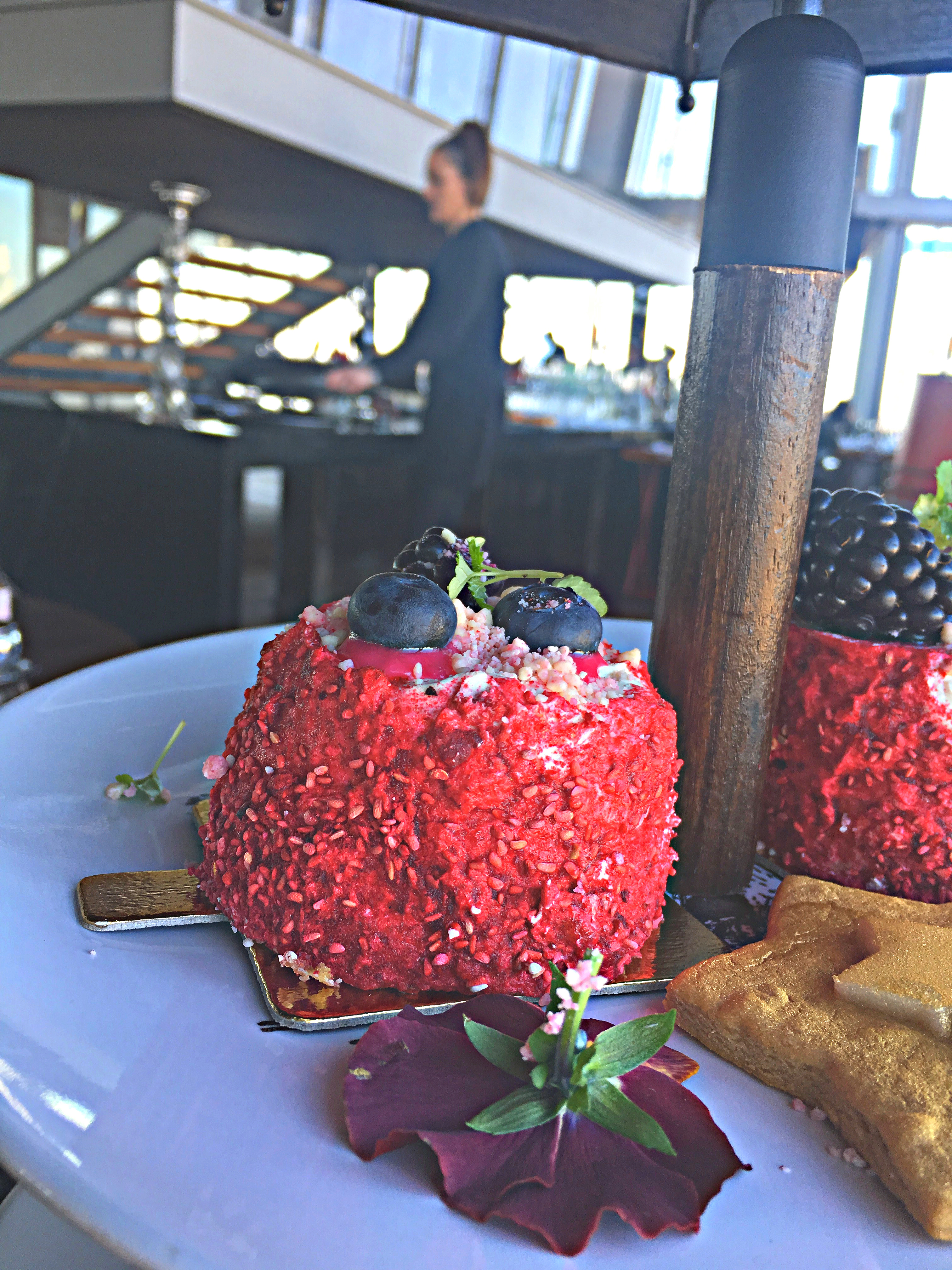 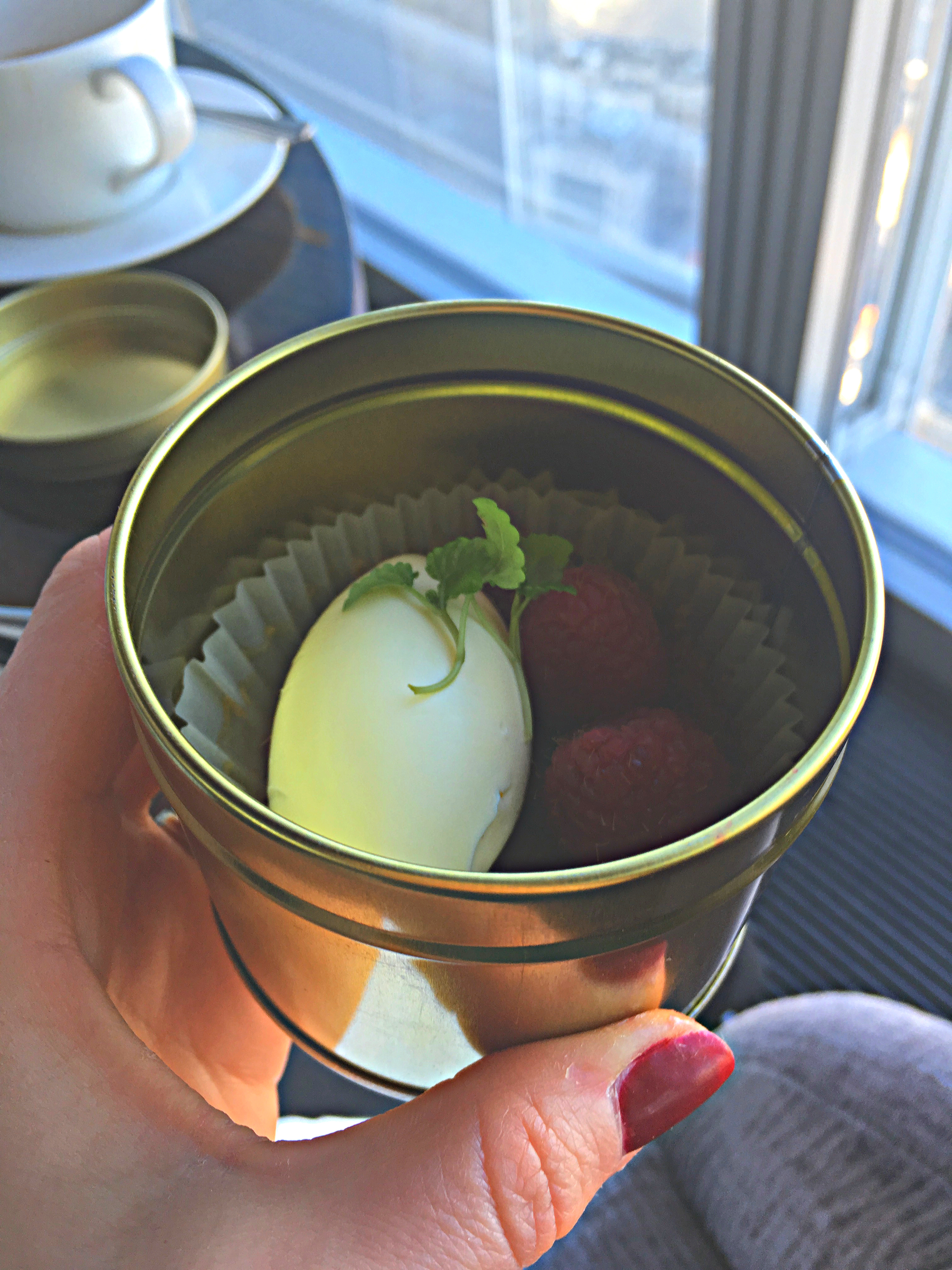 There wasn’t much room left, but you can’t not at least try some of the cakes. The raspberry twist on a class Victoria sponge, and the sticky toffee pudding in its own little tin were probably my favourites. 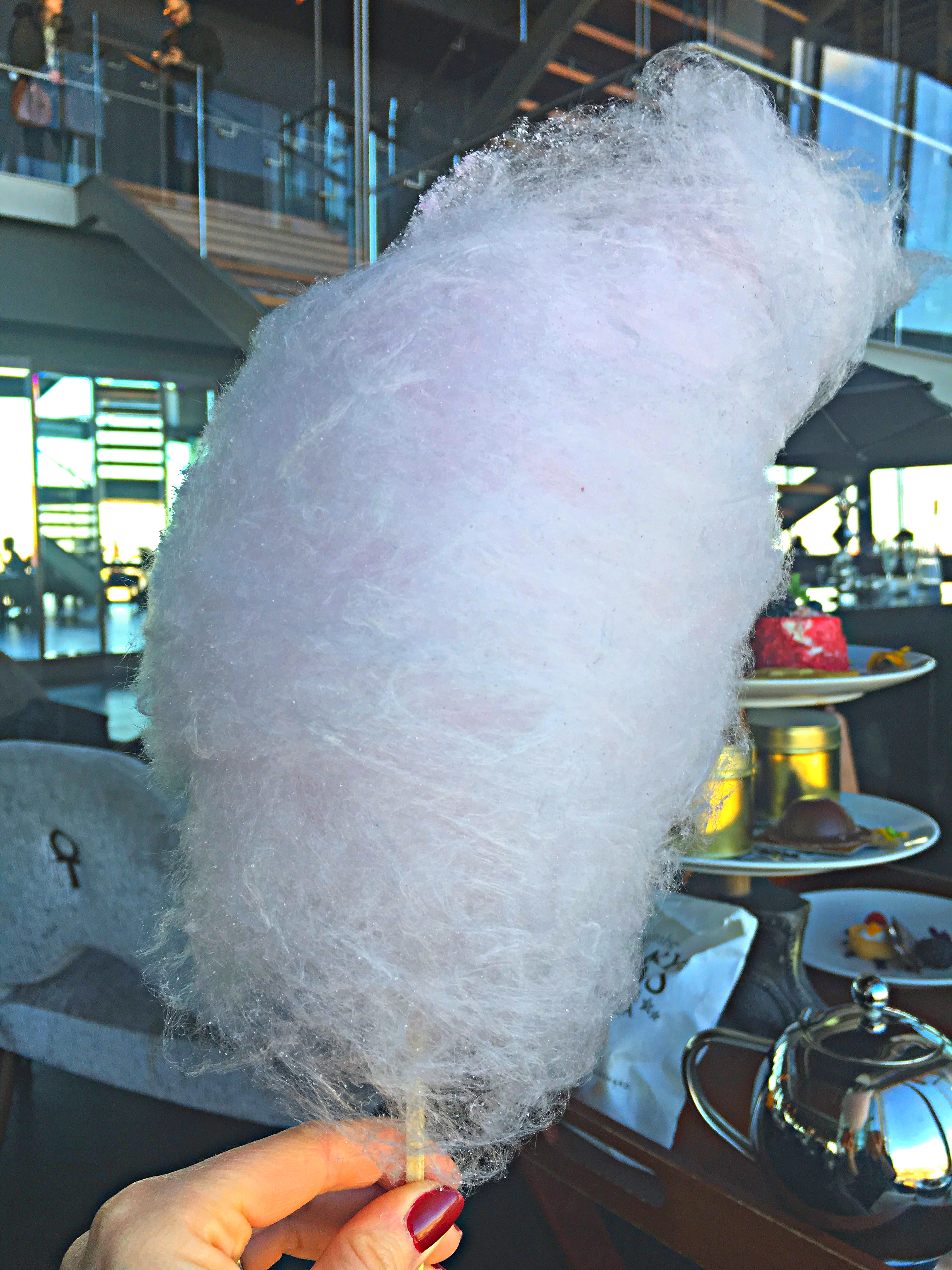 And to top it off they had an actual candy floss machine in the restaurant, and we were given these as an afternoon tea ‘chaser’ (ideal for me as I love candy floss, my Mum isn’t such a big fan but it’s not compulsory or anything to have one). 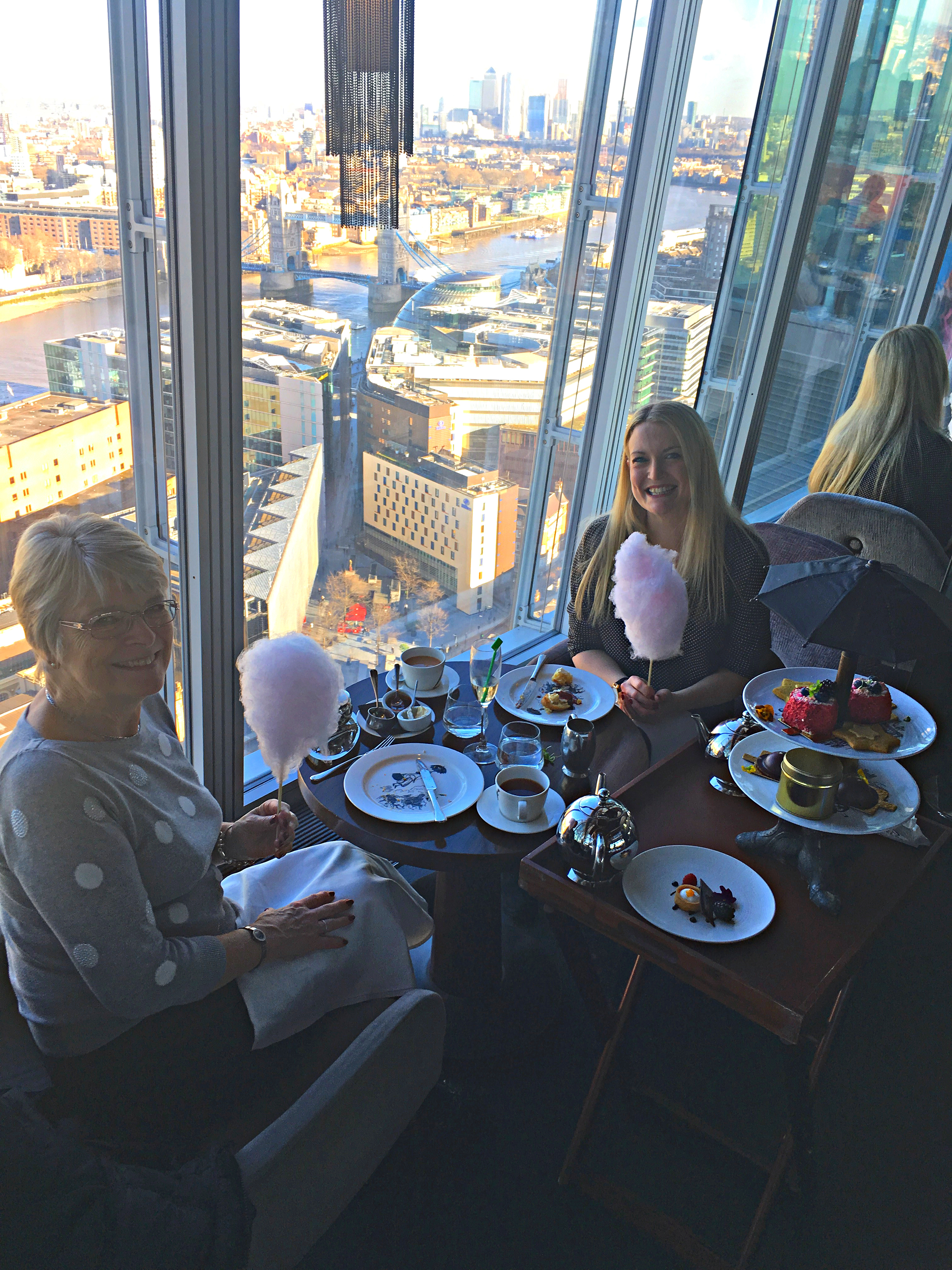 So would I come again? You bet I would! Although it definitely isn’t cheap, coming in at £66 a head for the champagne tea, but oh such a treat. They also do a slightly cheaper children’s afternoon tea, and I’m really very tempted to book this for Sasha and I to go, as she’s also seen the film with Rainbows and so would appreciate the nods to Mary P.

Mary Poppins Afternoon Tea at Aqua Shard runs until 3rd November 2019 so I have plenty of time to hopefully squeeze another one in –  you can book yours here!

See some more of my other London Adventures