Our skiing holiday last month was absolutely fantastic, definitely one of the best holidays I’ve ever been on, and it was certainly no mean feat attempting a snow holiday with three young children (including a then-6 month old baby). One of the main things people have asked me about the holiday has been along the lines of “how on earth  did you managed to have a skiing holiday with a baby?”, and crucially “Did you actually enjoy it?!”

Well, yes, we did manage to hit the slopes with a baby in tow AND yes, we did enjoy it! A snow holiday with a baby certainly isn’t without its challenges, but it’s certainly doable with planning and choosing the easiest way possible to holiday (we went with Mark Warner, more on that later).

To be honest we would probably have been like many people and not gone until Arlo was older, had we not a decent gap between him and the older two, but we refuse to not do things just because we have a baby, and we never want the big two to miss out because they have a baby brother.

So Arlo doesn’t really have a choice but come along for the ride! 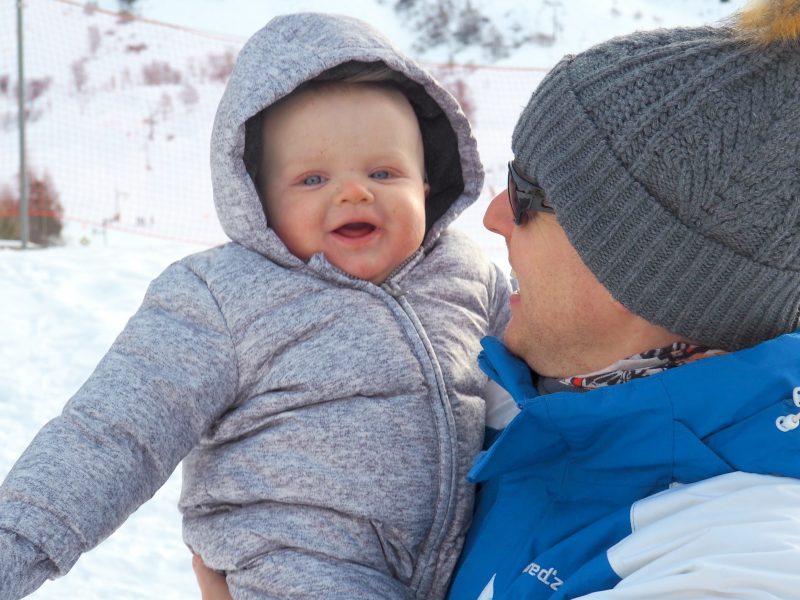 Here are some of my tips for if you’re considering braving it with a babe, and also a peek at just how child-friendly the Hotel Berangere (in Les Deux Alpes) was.

Going with Mark Warner, a holiday company known for it’s excellent childcare and facilities, was a big factor in our ability to really relax and enjoy our holiday. As well as qualified British nannies who you could book to look after your child or baby, the hotel had surprisingly great facilities for parents to use. I was ridiculously impressed with the parent kitchen- it had a fridge for baby food/milk, sterilisers, a kettle, a microwave, bottle brushes, cool boiled water and even labels and a pen so you could name you child’s things. 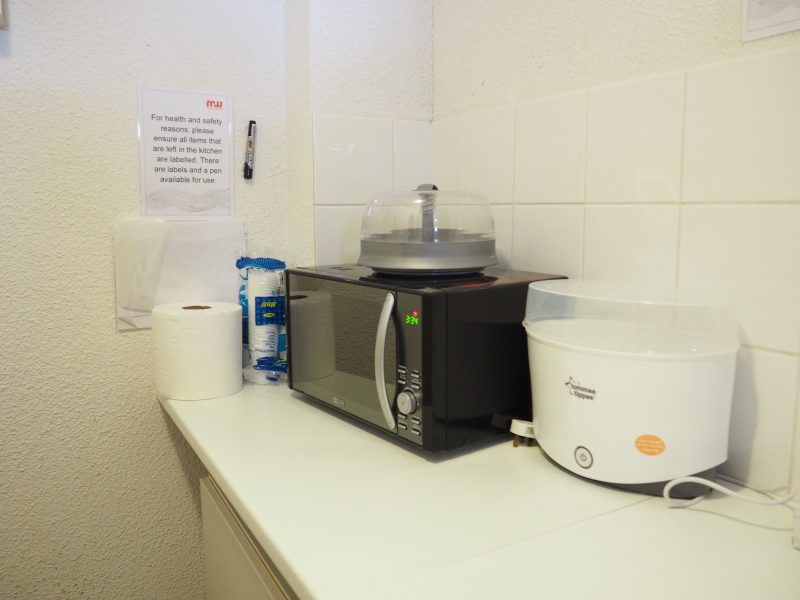 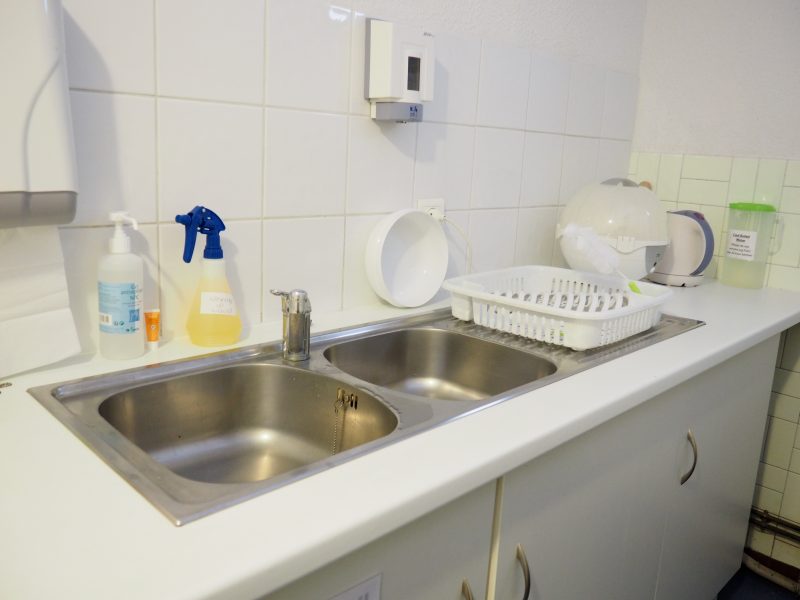 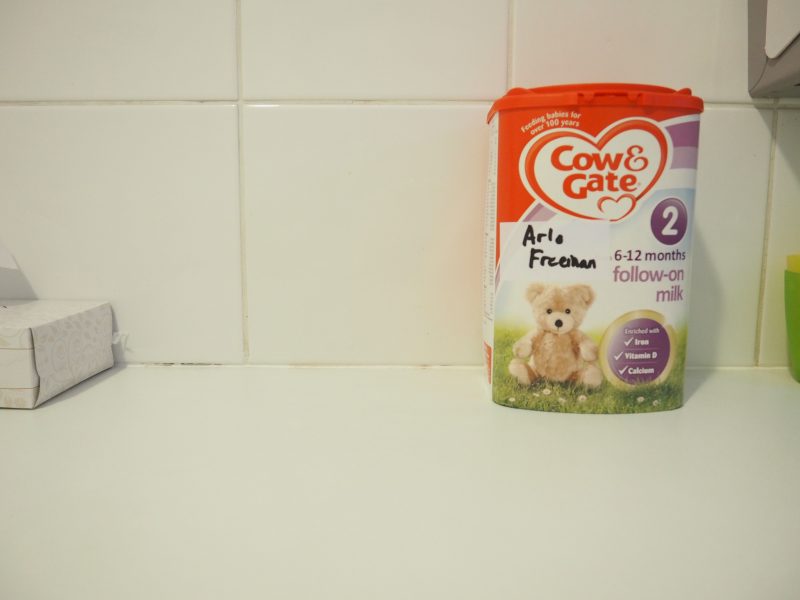 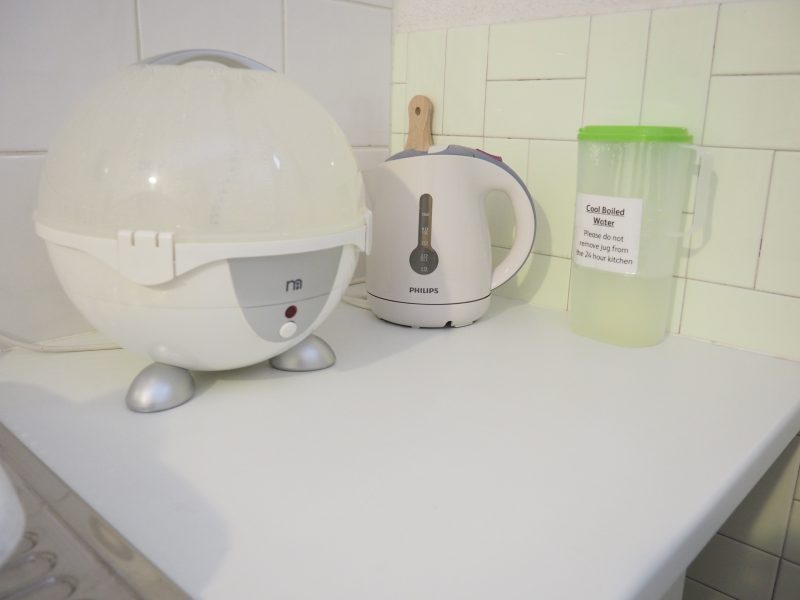 All of these were provided for parents and nannies to use, and were a godsend for a formula fed baby. The kitchen was scrupulously clean, and checked on several times a day by the staff to ensure all was still satisfactory. We had a travel cot provided for us which was a huge help and was one less thing to think about, plus we were able to wash bibs and baby clothes using the hotel laundry service a couple of times a week.

We felt comfortable booking Arlo into the childcare service for a couple of sessions, and he really couldn’t have been in better hands with his own dedicated nanny (he was the only baby that week). The baby room is also lovely, with lots of clean toys, bouncy chairs, play gyms and a ball pool, so plenty to keep him occupied. He also did foot painting whilst we were up the top of a mountain, and we arrived to collect him mid-afternoon and received a lovely memento to keep too. 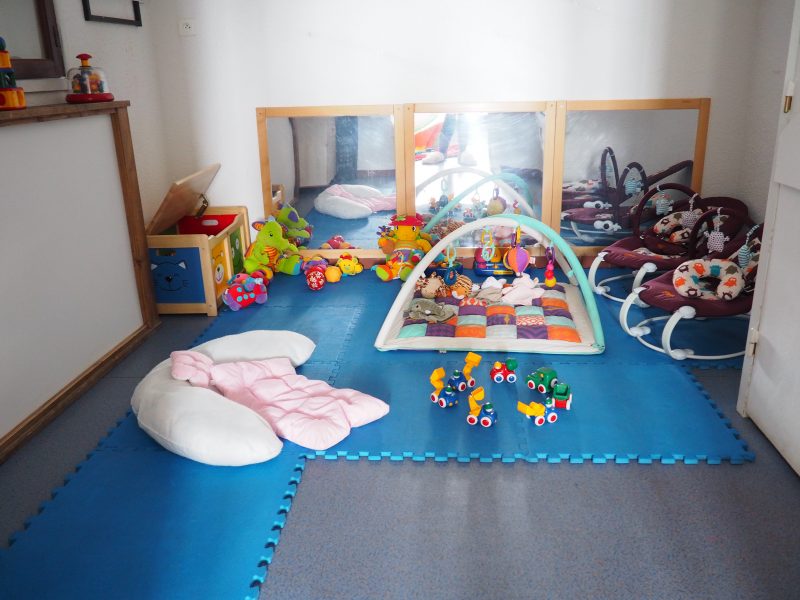 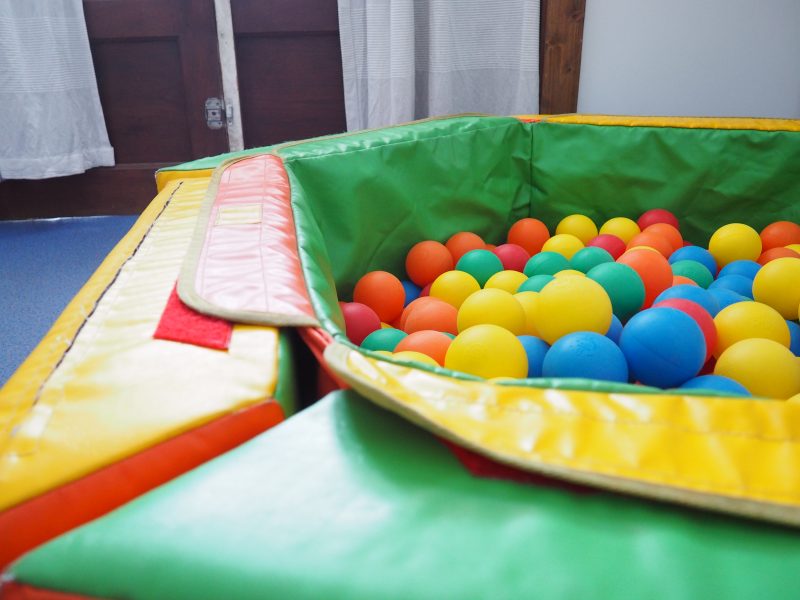 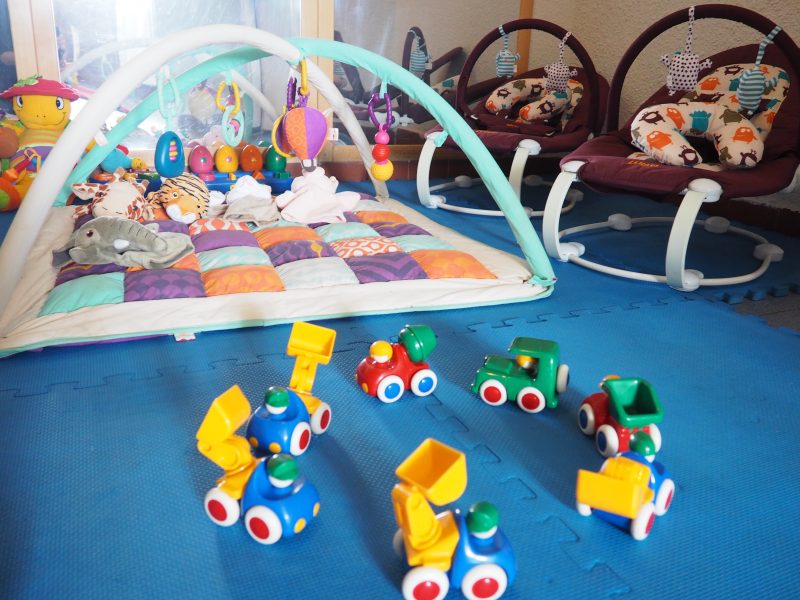 Getting about with a baby – Hire a snow buggy

We had bought our Maclaren  with us for the airport either end of our journey, and also because we had read previous advice saying that the main town in Les Deux Alpes should be okay snow-wise to get about. Well, unprecedented amounts of snow from Day 2 meant that the Maclaren was swiftly ditched, and in its place we hired a snow buggy from Inter Sport for the week for about £25 (there were several shops within the resort). It was SO worth it, and our little chap was happy as larry being carted about in it and they actually seem pretty comfy. 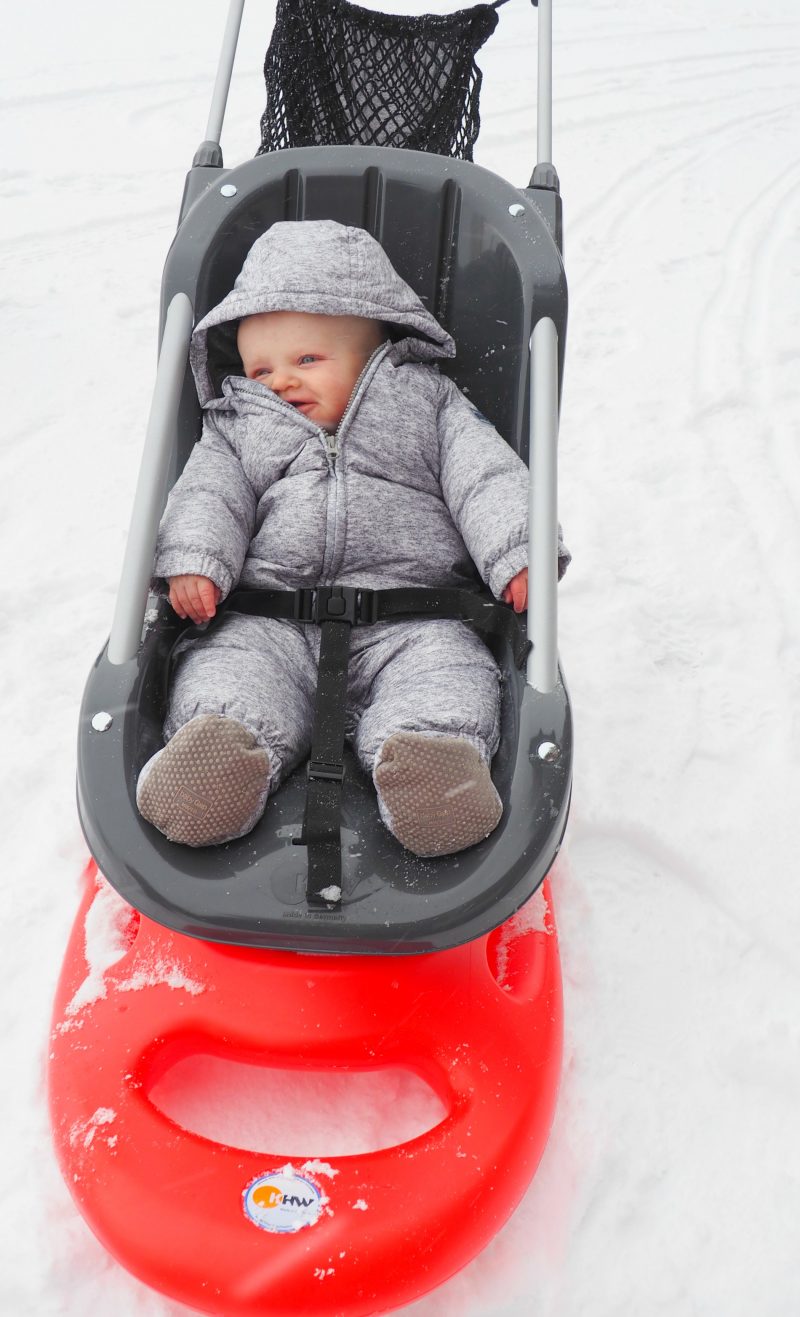 Don’t fret about the cold

One thing I was concerned about was bringing a baby somewhere, well, so cold. I needn’t have worried though, as as long as you have a decent snowsuit and layer up then they will be fine. We tended to do the following: long-sleeve vest, sweatshirt/or long sleeve top, knitted cardigan and then roomy snowsuit so we could get him in and out of it easily and for nappy changes in cafes on the slopes. I would personally go up a size for your snowsuit, and bring plenty of layers.

Babies will breathe faster at a higher altitude, so they need more fluid throughout the day. We also steered clear of taking Arlo really high up the mountains on the bubble lifts when we went up for lunch with the big two as it’s not great for baby’s ears going so high – he stayed behind with his chalet nanny for the afternoon which was definitely for the best.

If cost of childcare or even the fact you prefer someone who know i.e. your partner to have your baby, then split your time on the slopes, with one of you perhaps going in the morning, and the other in the afternoon. We did this on a couple of days and it worked a treat. 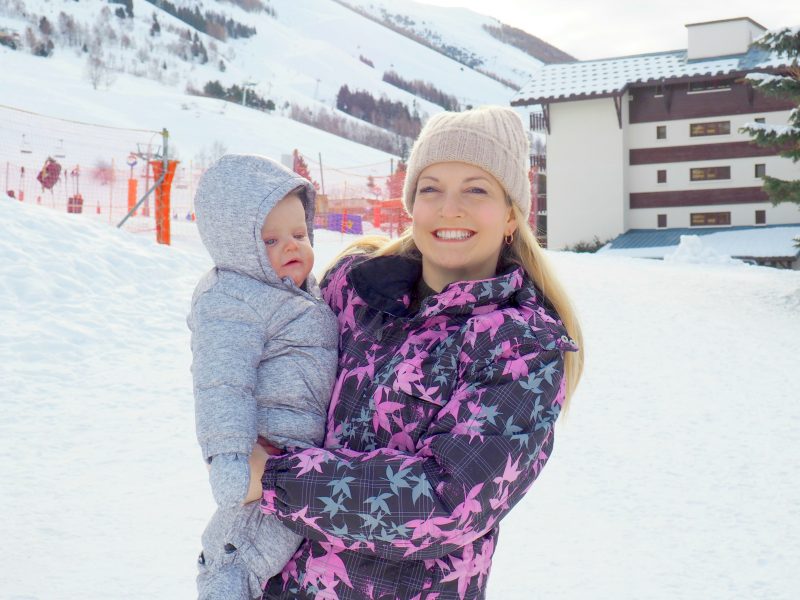 You can still keep roughly to baby’s routine

We managed to keep loosely to Arlo’s routine even when away. When we headed to ski school with the big two at 9am, we put him in his snow buggy and he had his morning nap. One of us then headed back to the hotel post-nap so he could either spend time with his nanny or for us to play with him. We then gave him lunch about 11.30am, before putting him back into his snow buggy to go and collect F & S from ski school and have lunch somewhere on the slopes- whilst he then had a decent lunchtime snooze. I swear alpine air is amazing for helping babies sleep well (by day anyway!). 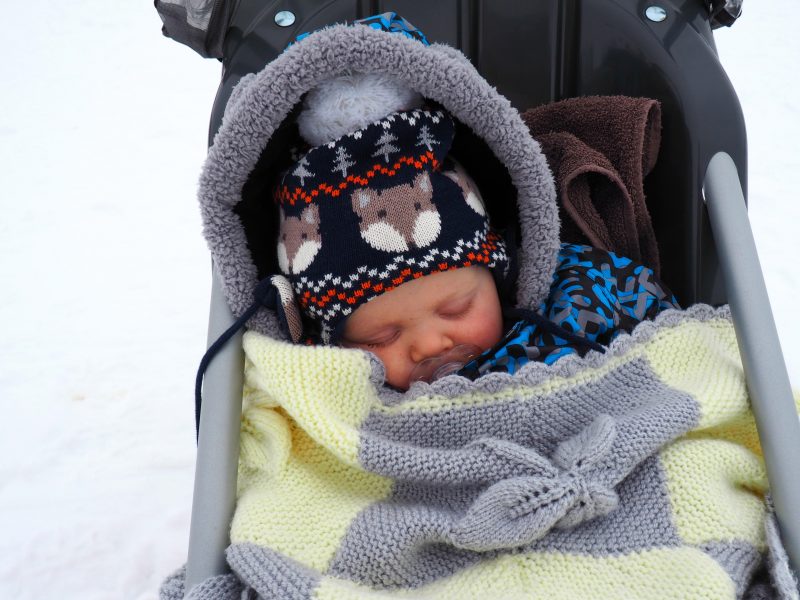 So here is my experience of baby-wrangling in the snow. If you have any questions please feel free to ask in the comments section below, or alternatively I’d love to hear your tips too!