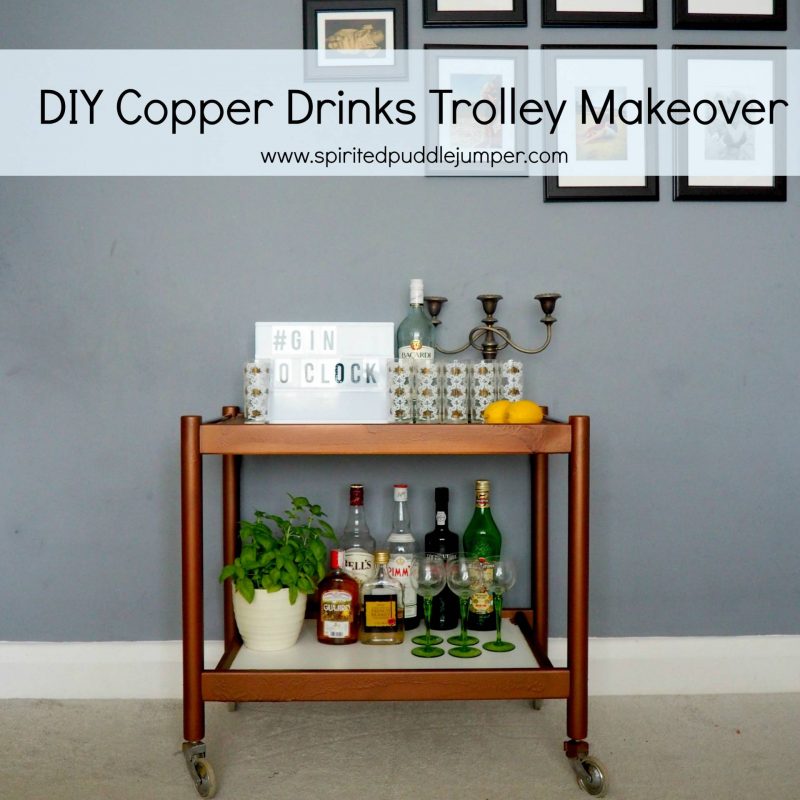 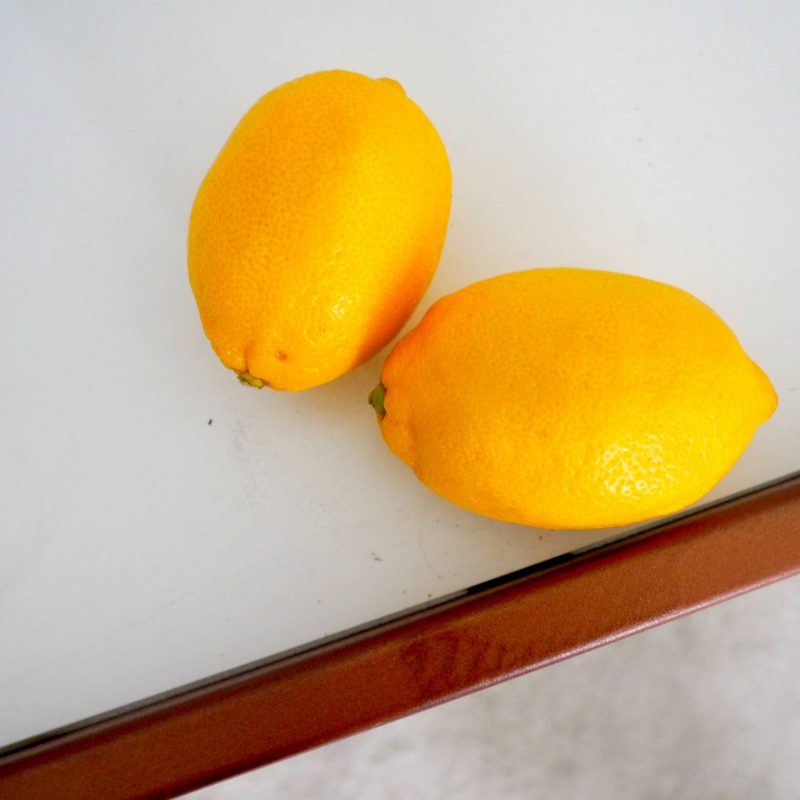 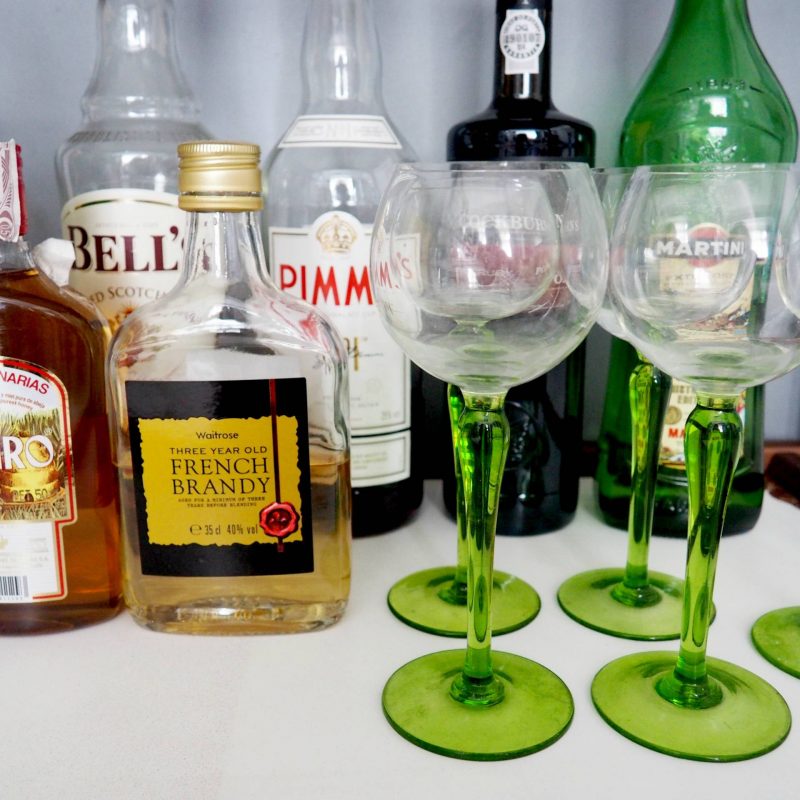 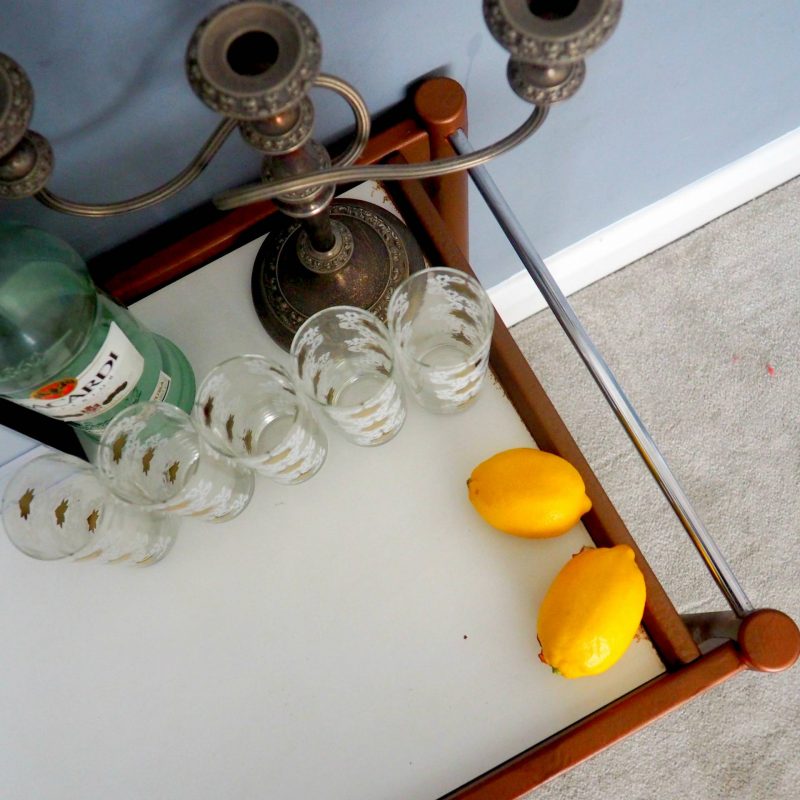 A few weeks ago I began the mammoth task of beginning to sort out our garage in preparation for our impending house move- what to keep, what to chuck, and everything in between. During this clear out I came across the old trolley that has been housing some of my vintage homeware for the past 4.5 years, and that used to belong to my Nan before she passed away. I’d never really paid it much attention before- it served purely as a vessel in which to host my shop collection. However, when it came to the decision-making process of keep vs chuck, I realised that this could be one piece of old furniture that could still serve a purpose in our new place (albeit a very different one!). And that we could still keep something nice that belonged to my Nan. Which is rather lovely 🙂 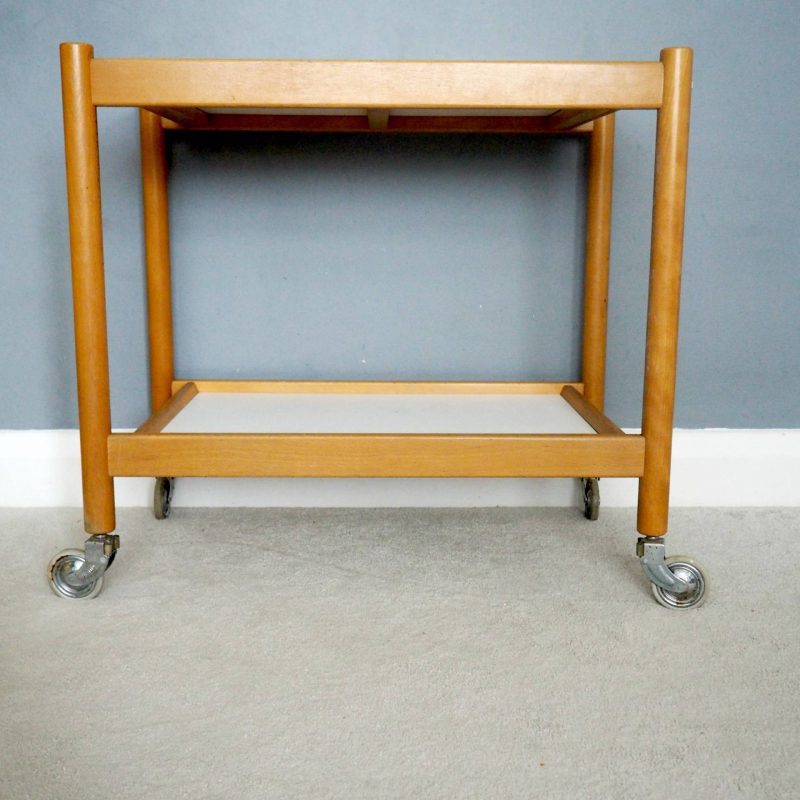 So I decided to up-cycle it and make it into a functional-yet-swish drinks trolley, to be housed in our new larger living room when we move. I’m itching for SEO and Pinterest purposes to call it a ‘Bar Cart’ (I always say that in an American accent), but let’s face it, I’m British, and it’s a drinks trolley through and through 😉

It’s kind of ironic since Adam and I have cut down massively on our drinking recently, but you can’t say us Freemans aren’t a hospitable bunch- if you want a cocktail of some kind, get thee to ours!

Making over this trolley was actually a pretty easy thing to do, and all you need is some copper spray paint (more on this shortly), sandpaper, cling film and kitchen foil.

I’ll show you now how I did it… 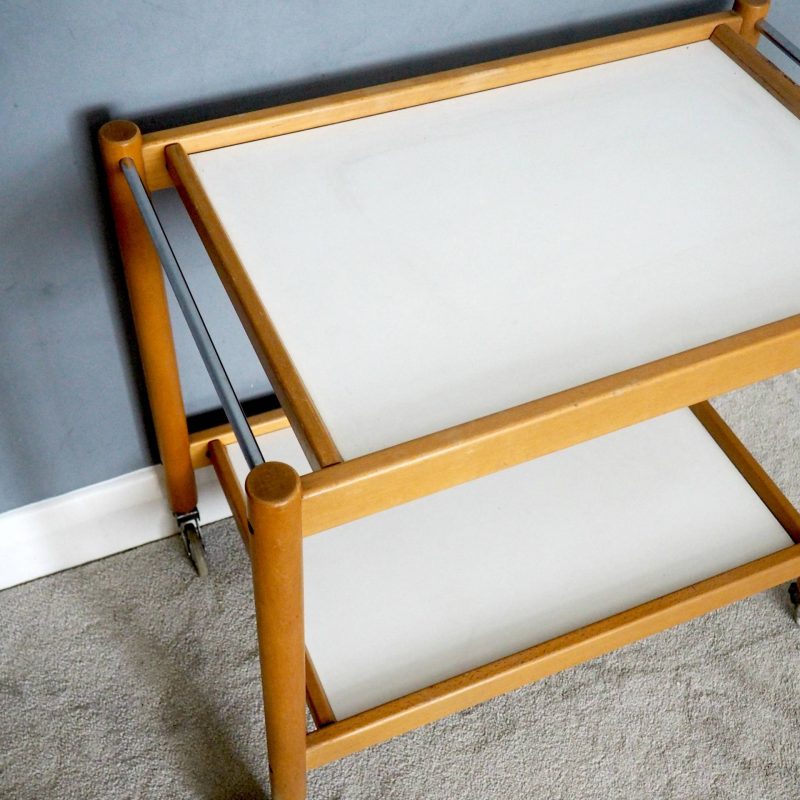 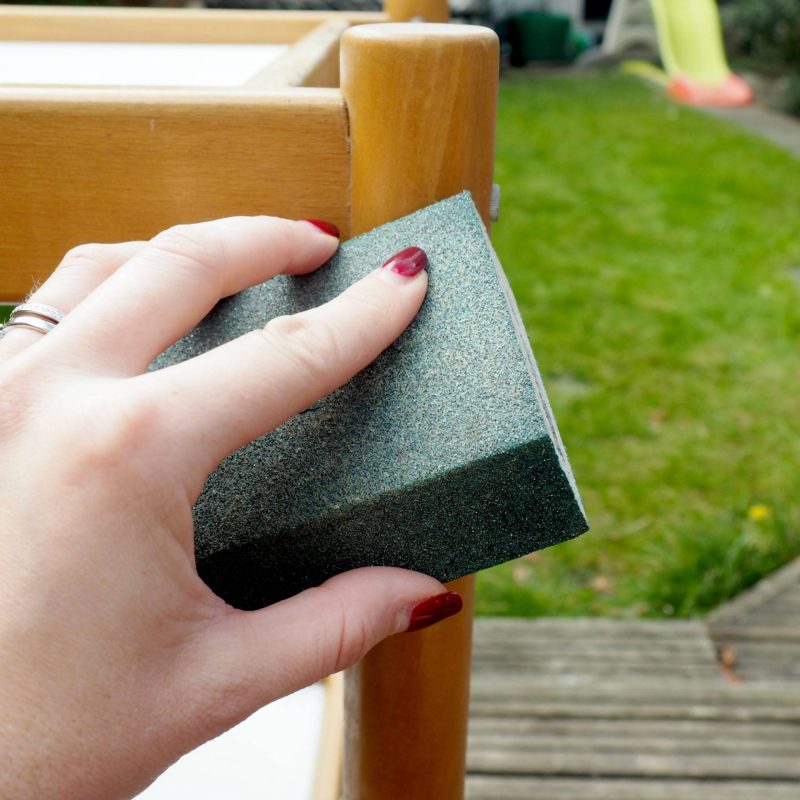 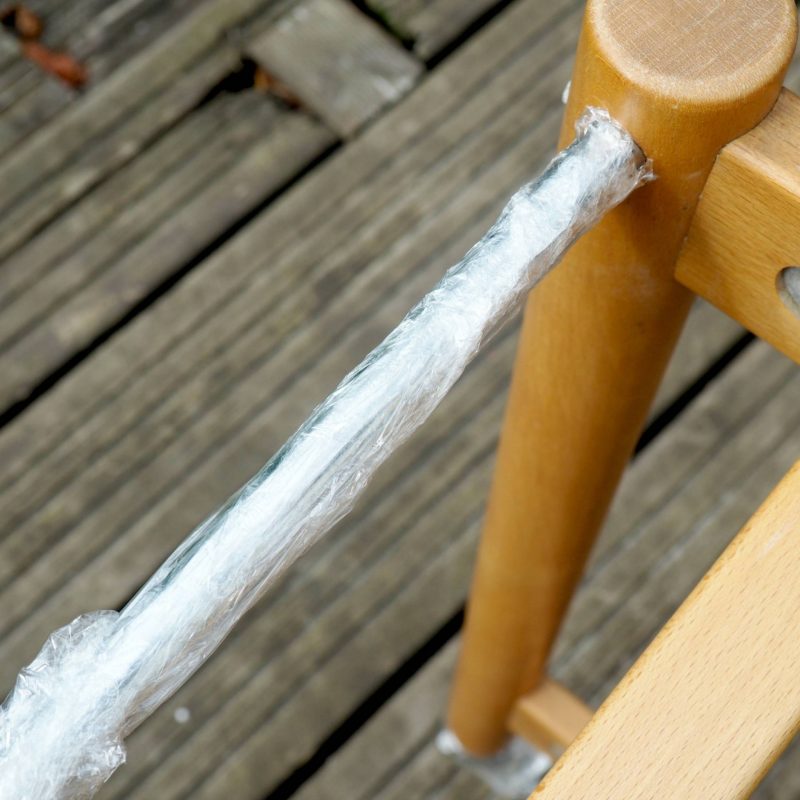 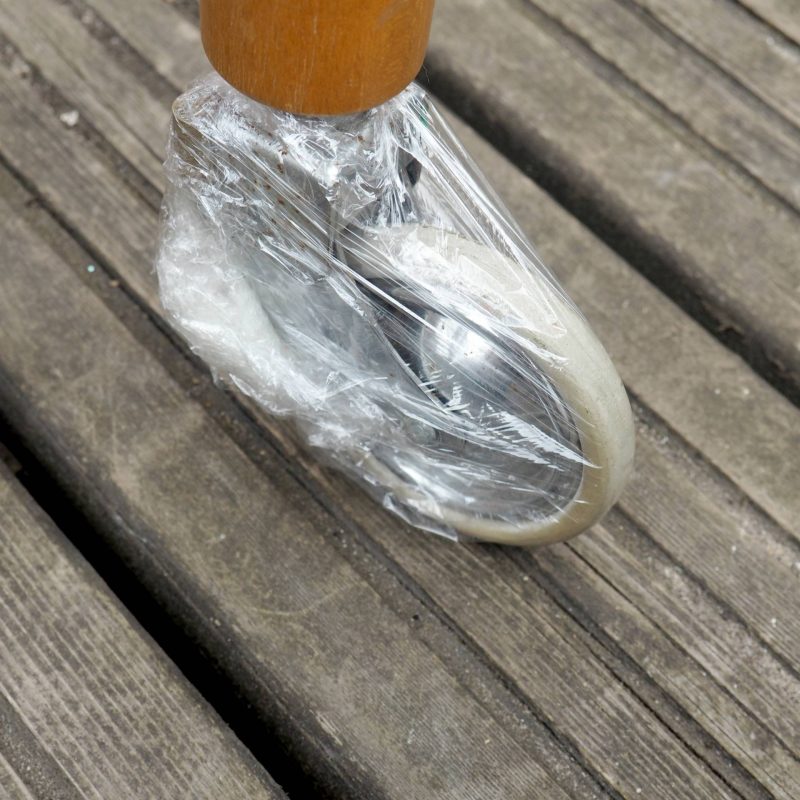 ^^Next, I removed the trays and then covered the metal parts of the trolley (the bits I didn’t want to spray with the copper paint) with cling film. This actually worked really well, and meant that it could be removed easily one the paint had dried. 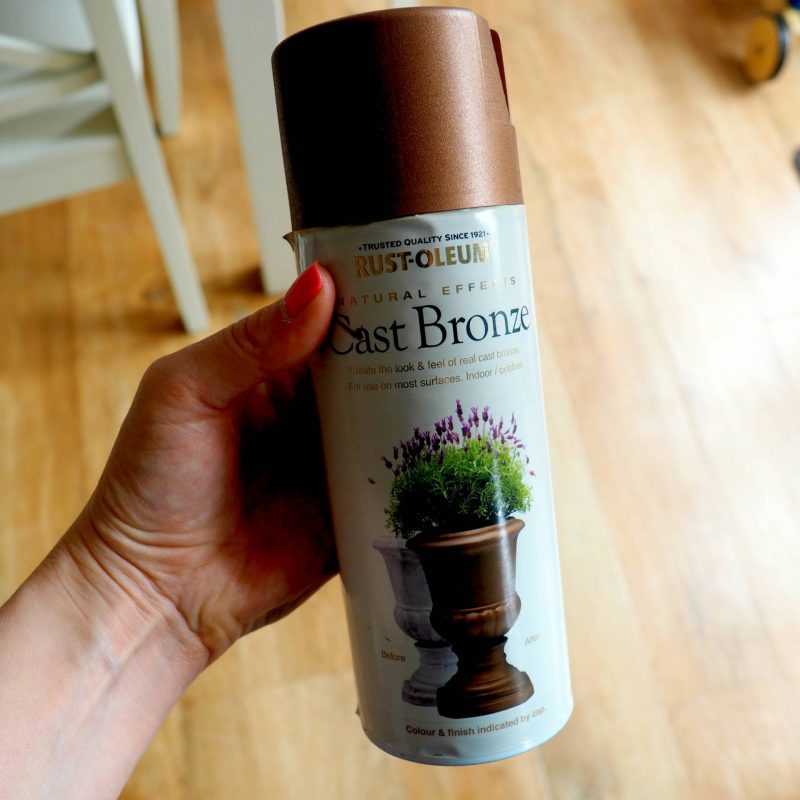 ^^After hunting high and low in Homebase, I finally found some spray paint that would give me the look I was after. Whatever you do, make sure you buy enough spray paint for your project! I thought I’d be okay with just the one can, but ran out half way through the first coat and my car was in for repair for two days so couldn’t go back to the shop, meaning I couldn’t finish the trolley in one go- DIY nightmare! Once my car was returned I managed to drive back and get 3 more cans (just to be on the safe side). I ended up using nearly 3 in the end, so have a welcome spare now for future projects. 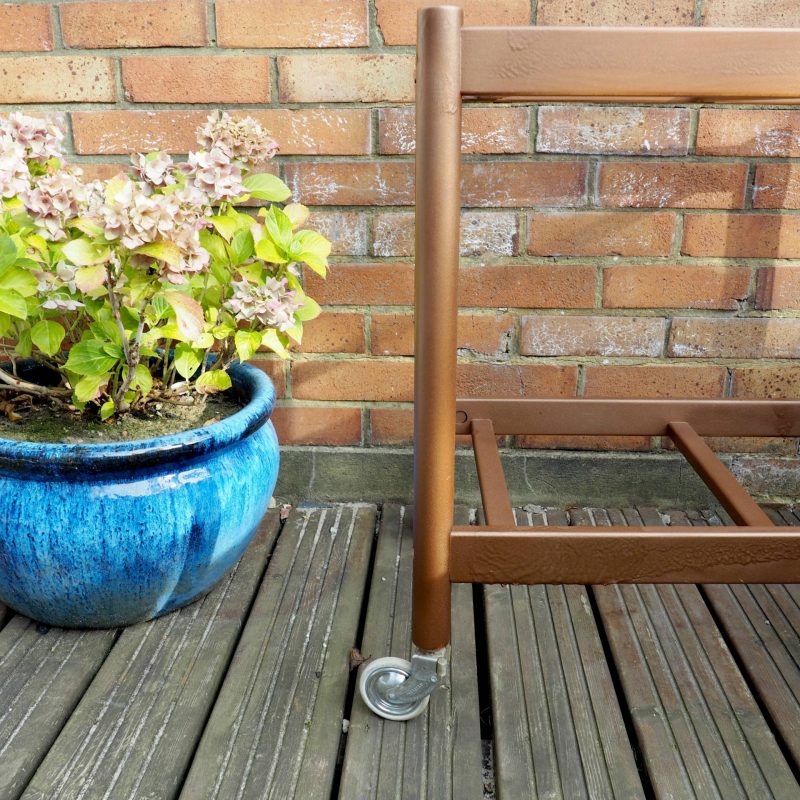 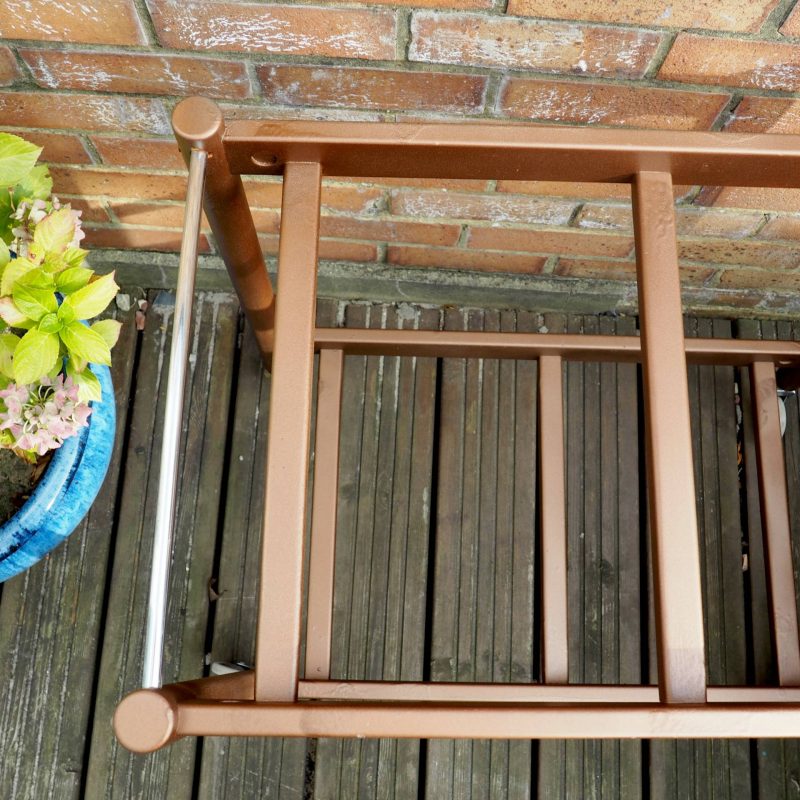 ^^Make sure you spray in a ventilated area outside. I sprayed on our lawn (poor lawn), holding the can 30cm away from the trolley and spraying back and forth to try and get as evener coating as possible. The paint dries really quickly (in about 20  minutes), which is good news, but make sure you wear protective or old clothing as this stuff is a stayer! 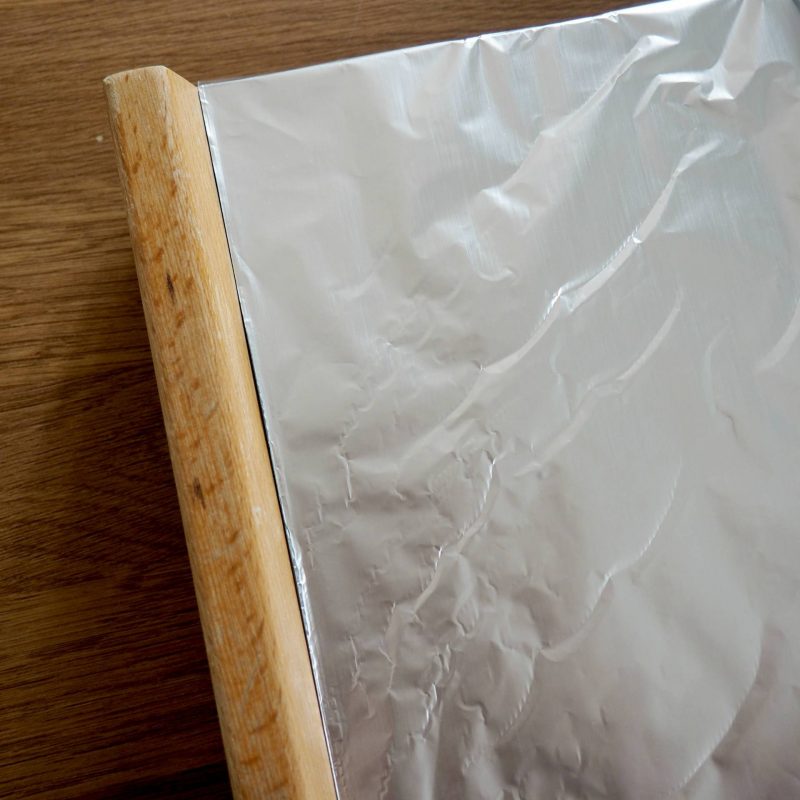 ^^Once the trolley frame was painted, I set about prepping the trays for spraying which was potentially a little trickier. So as not to spray the white laminated bases, I lined the trays with kitchen foil, which is ideal to use as you can press it down at the edges and and it stays firm. 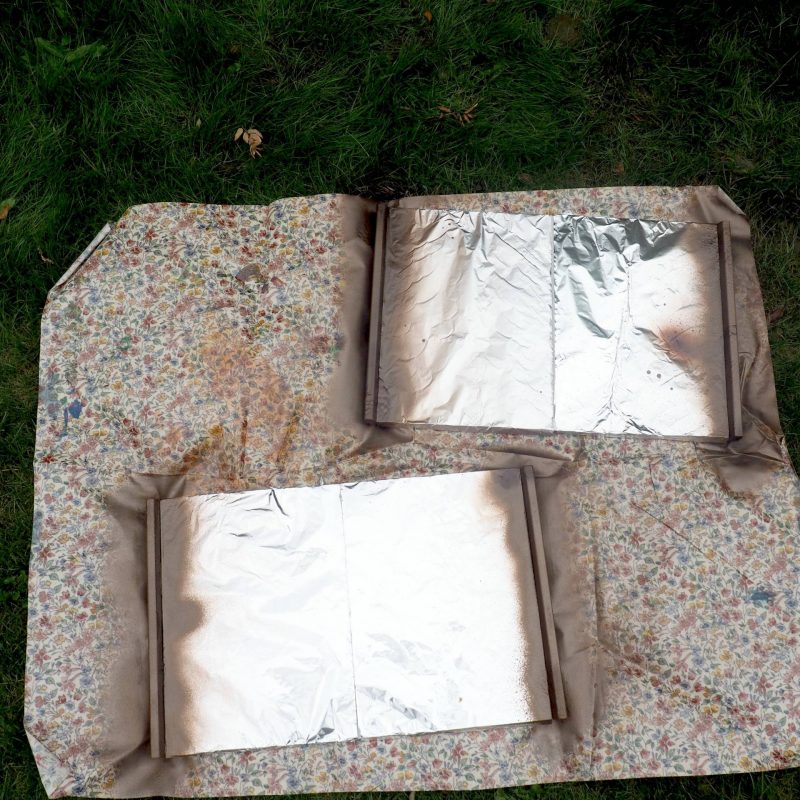 ^^As with the frame before, I took the trays outside and then sprayed both wooden edges, to continue with the copper effect. Again, these took about 20 minutes to dry, and then after about an hour or so (just to be safe!) I added them to the tray.

Our new drinks trolley was ready for action! 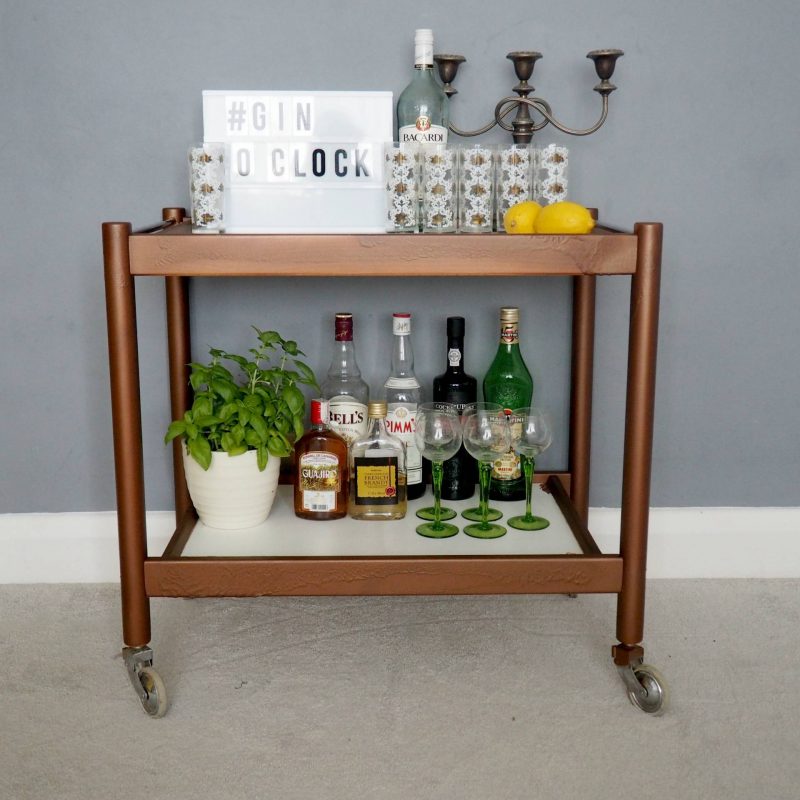 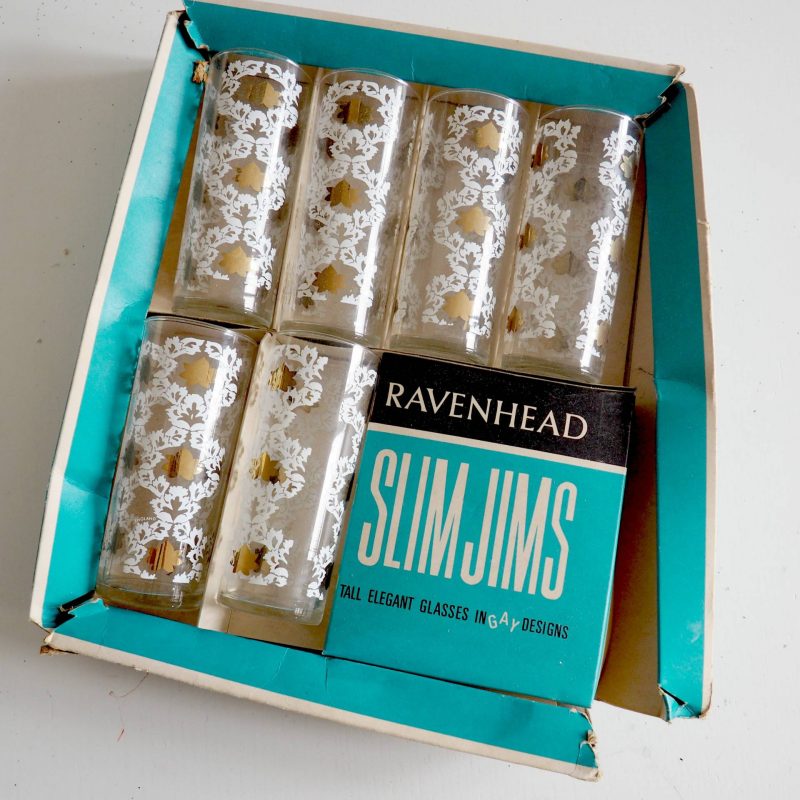 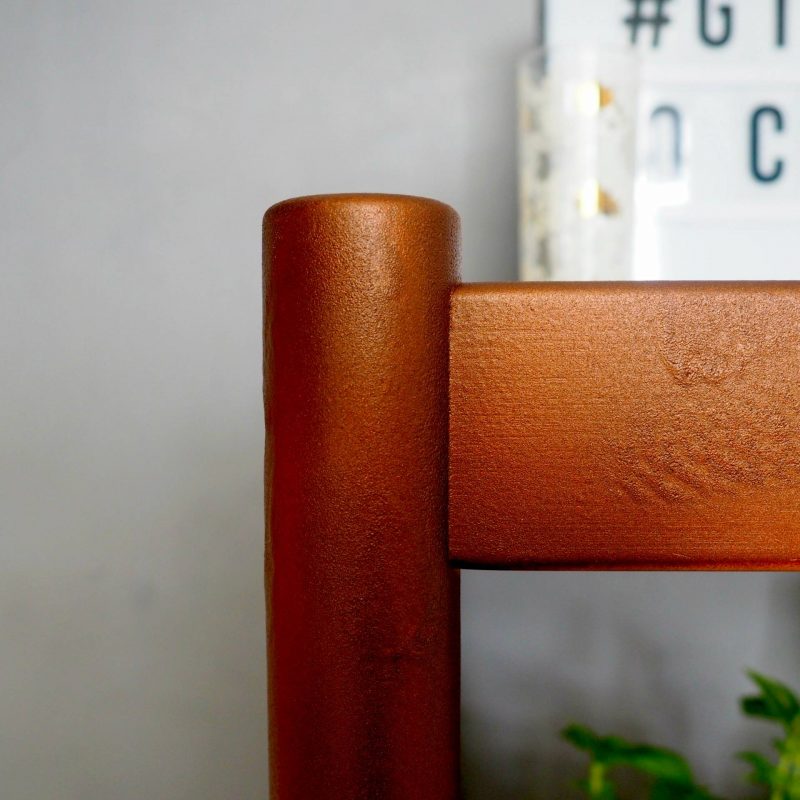 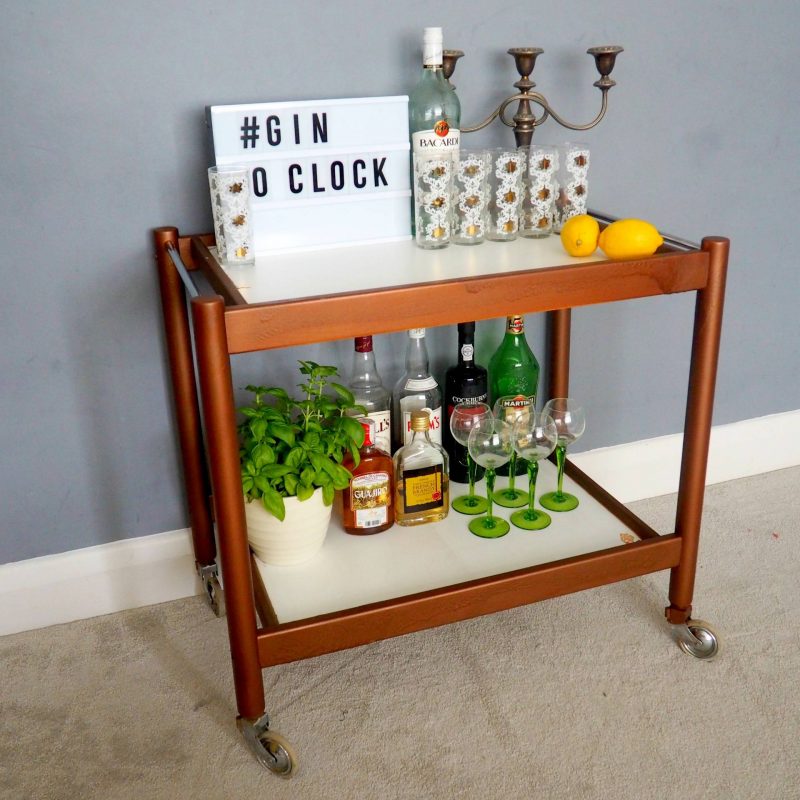 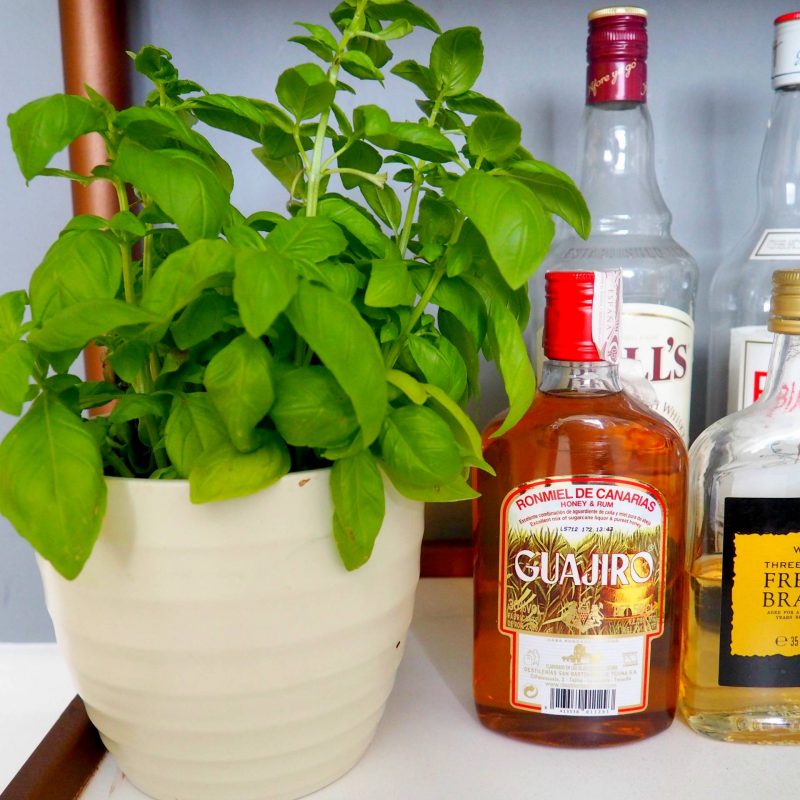 The finish isn’t perfect, but I have to say that I’m ridiculously pleased with it, and almost as pleased with the fact that I finally get to whip my vintage 1950s Ravenhead ‘Slim Jims’ glasses out of storage, as they are a perfect match for the trolley!

Gin and tonic anyone?