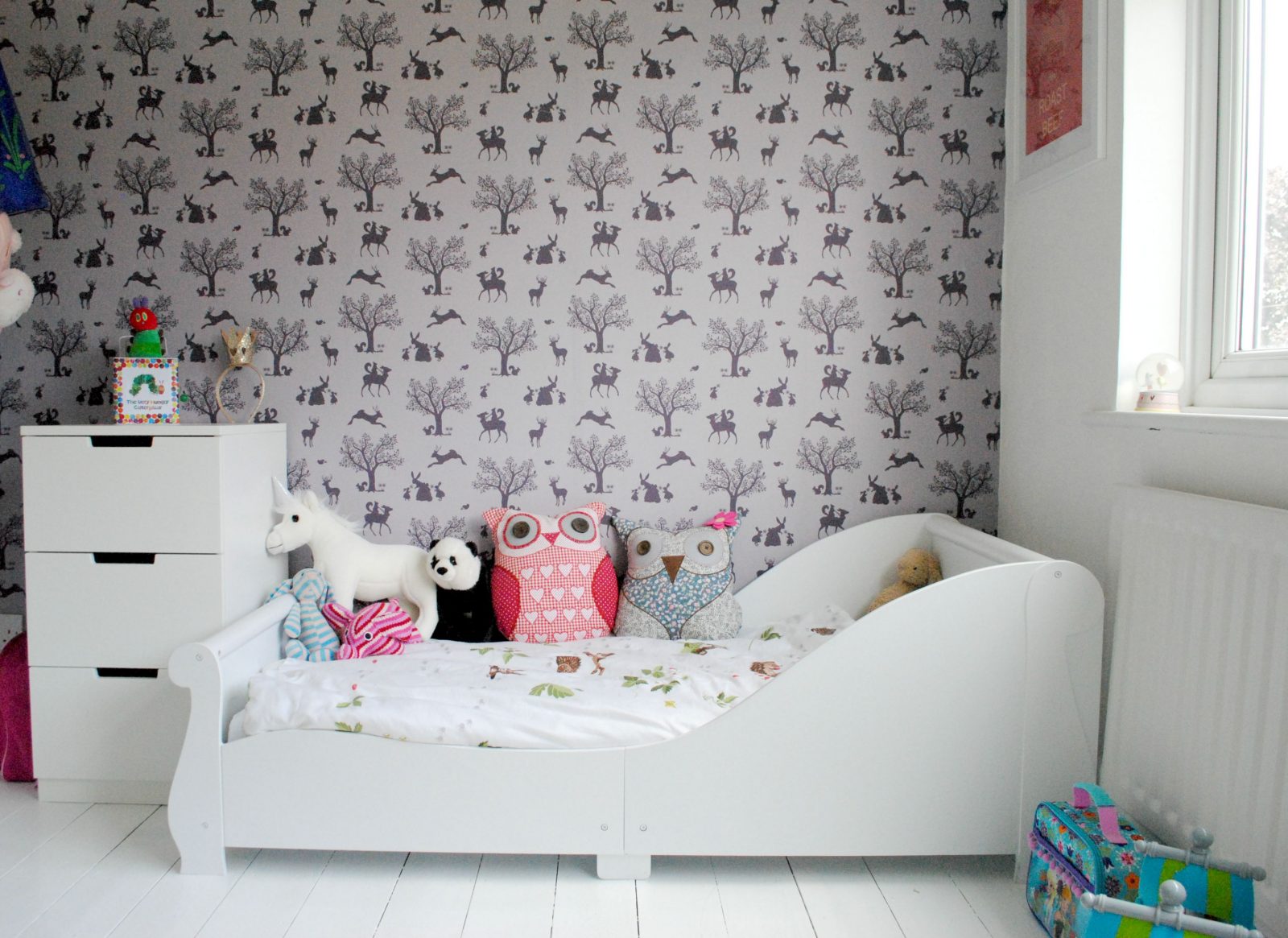 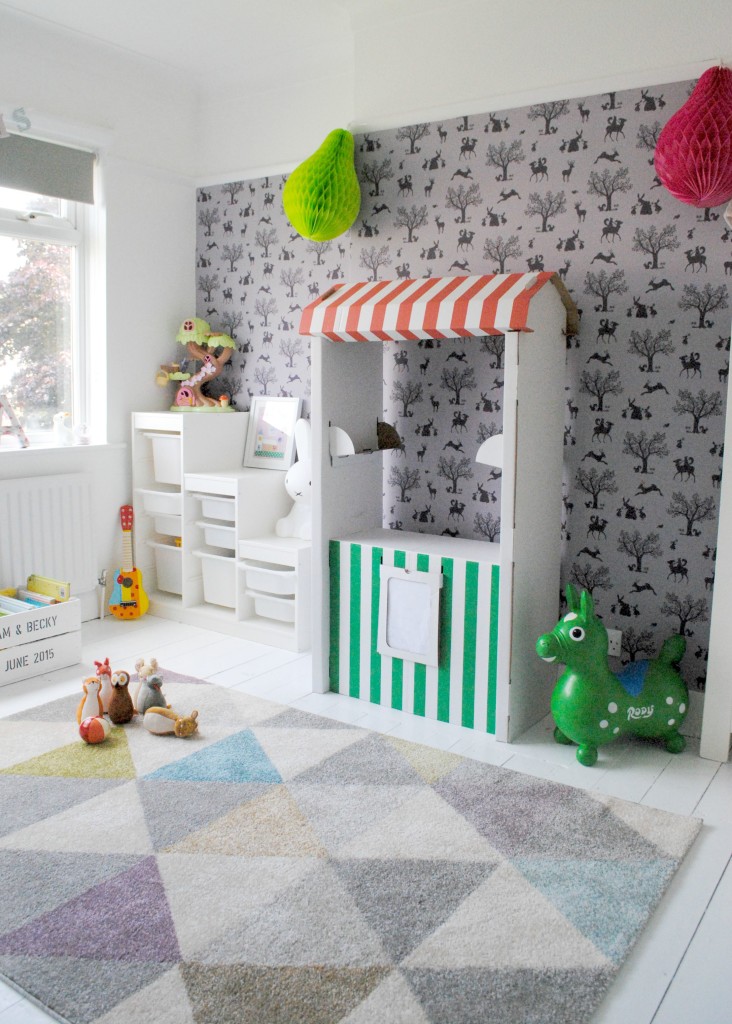 Ever since we completed our new loft bedroom, I’d been itching to get my hands on our old bedroom to transform it in to a brand new space for our little lady (she had previously drawn the short straw of the tiniest room in the house, what with being the youngest), and turn it into a haven fit for a 3 year old- and beyond! The room already had plain white walls and exposed floorboards, and whilst in need of fresh coats of paint, it was essentially a blank canvas.

When it came to deciding on a theme/colour scheme for the room, I obviously enlisted the help of my mini-me, who immediately requested “a purple room please, Mummy!”. Which I’m not going to lie, made me want to headbutt the sink, and is my idea of a nightmare when it comes to tasteful decorating. However, I wanted to stay true to my, ahem, ‘client brief’, and began to scour the internet for non-migraine-inducing purple wallpaper. Whilst I absolutely adore all the scandi-themed black and white children’s bedrooms I see on Instagram and the like, I always get the feeling (and sorry if this offends anyone, I don’t mean it to!) that the rooms are very much done for the adults and not the children. And when you’re 3, by golly do you have an opinion as to what you really want! Plus, whilst I’d like to say we have a room sparsely accessorised with carefully chosen wooden toys, carved by the fair hands of Nordic pixies, alas, we worship at the alter of plastic crap. So with this in mind, the room needed enough storage to hide said crap and keep clutter to a minimum.

So the challenge was set: To create a room that was very much my little girl, yet could pass-off as vaguely stylish AND practical, and I hope I’ve achieved that. Please do come and have a look around! 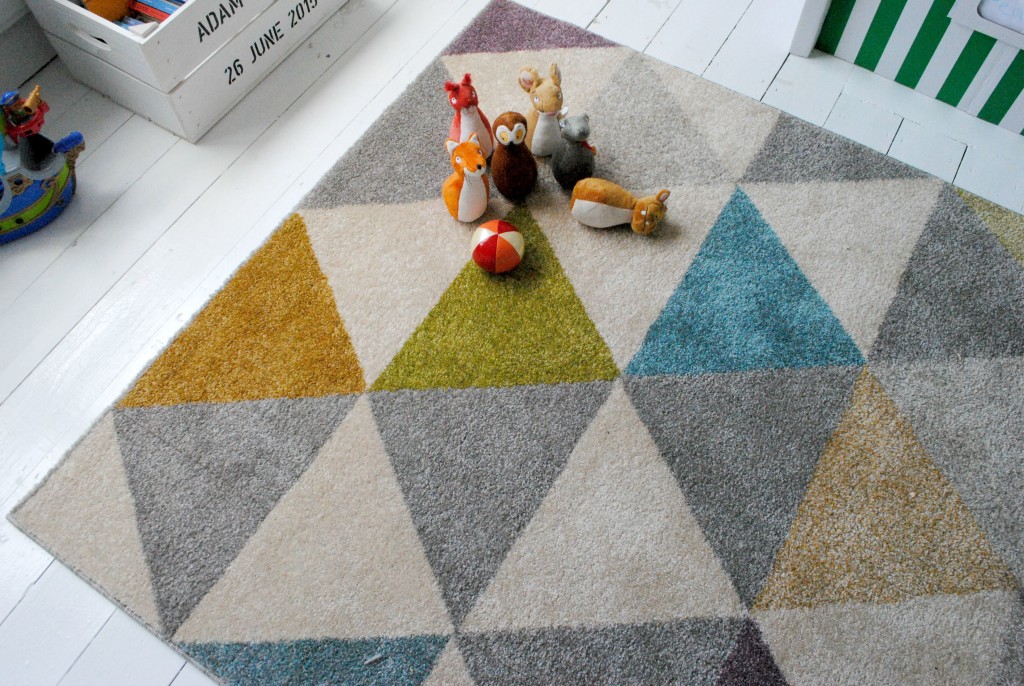 Our rug is c/o of Benuta who stock some AMAZING rugs for the home, and who also have a hug selection of wonderful children’s rugs. I could have bought several, and could imagine styling them in various little one’s bedrooms! I chose this rug because the different colours of the triangles had accents of the main colours in Sasha’s room. I was a bit worried about selecting a patterned one in case it was a bit ‘much’, but it’s actually worked really well. I definitely think in children’s rooms that have floorboards you need a decent rug or two (with not too much pile so toys can stand up okay!) for them to play on. We also bought a car/road play mat from Ikea that is different from the one in Freddie’s room, so we put this down too sometimes for them both to play on. Who says cars are just for boys?! 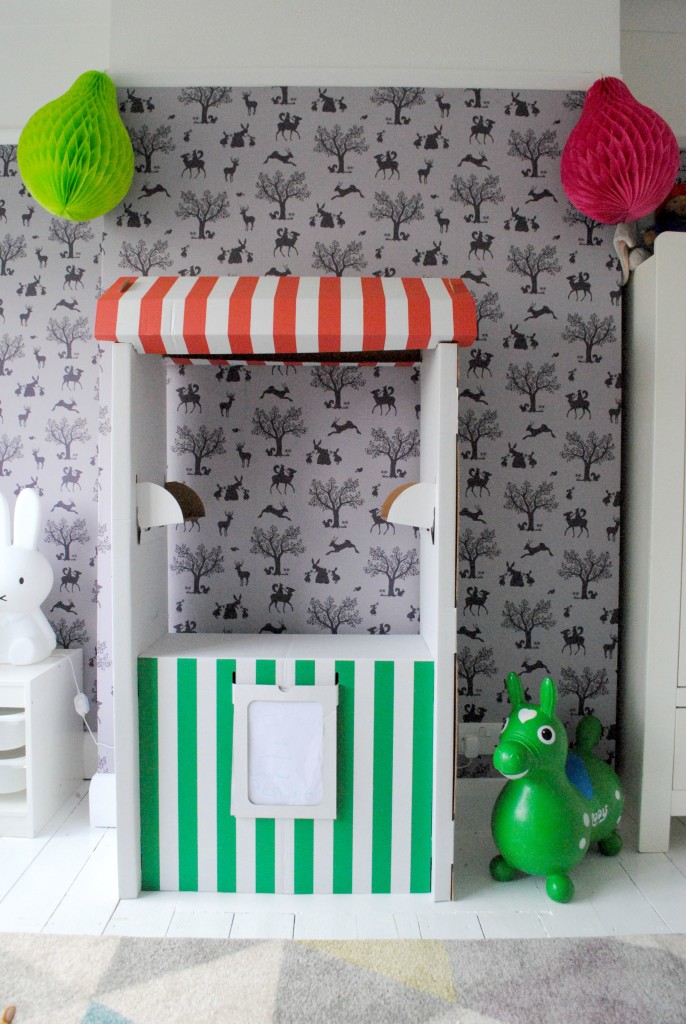 As I mentioned previously, finding the right purple wallpaper was my biggest challenge, and after several evenings of searching online, I found THIS beautiful one by Hibou Home, from Not on the High Street, and it’s called ‘Enchanted Wood’. At £70 a roll it’s not cheap (we needed 3 rolls for 3 walls) and was probably the most indulgent splurge on the room, BUT I think it was worth it. It’s so lovely and S adores it and I think it really ‘makes’ the room. I’ve actually come around to liking purple! All I can say is though, is that there is definitely a niche that is not being filled for classy purple wallpaper if any designers out there want to do something about it….

The cardboard market stall is my favourite recent bargain buy, and only just over a tenner from Ikea! It almost made the trip driving though Croydon worthwhile for this alone. I was perplexed at first as it didn’t come with any instructions and was tricky to assemble. I eventually found them online, but not before spending 15 minutes wrestling with the bastard thing and nearly slicing my finger off in the process. However, all was good in the end, and Freddie and Sasha LOVE it and I love the look of it and it’s pretty sturdy, so a win-win here. 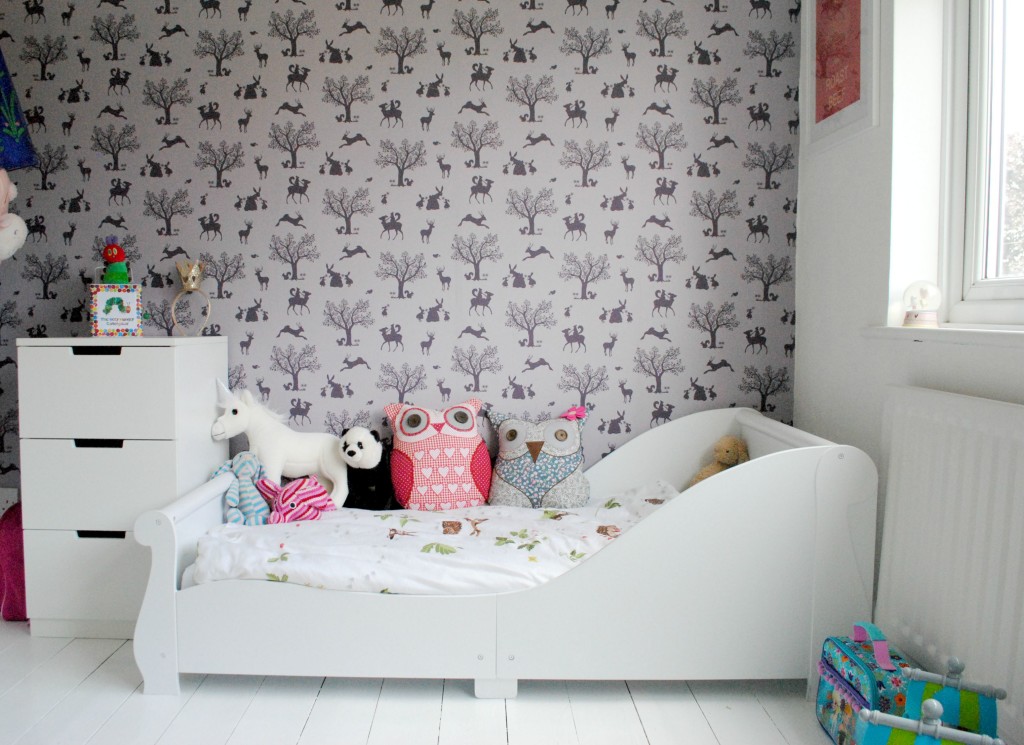 Sasha’s sleigh toddler bed is from Amazon and is by Kidkraft. The chest of drawers to the left are from Ikea and are the from the Nordli range. I love these as they are ‘soft close’, which means no scope for tiny fingers to be trapped whilst on the hunt from PJs/Swimming gear/ballet clothes. 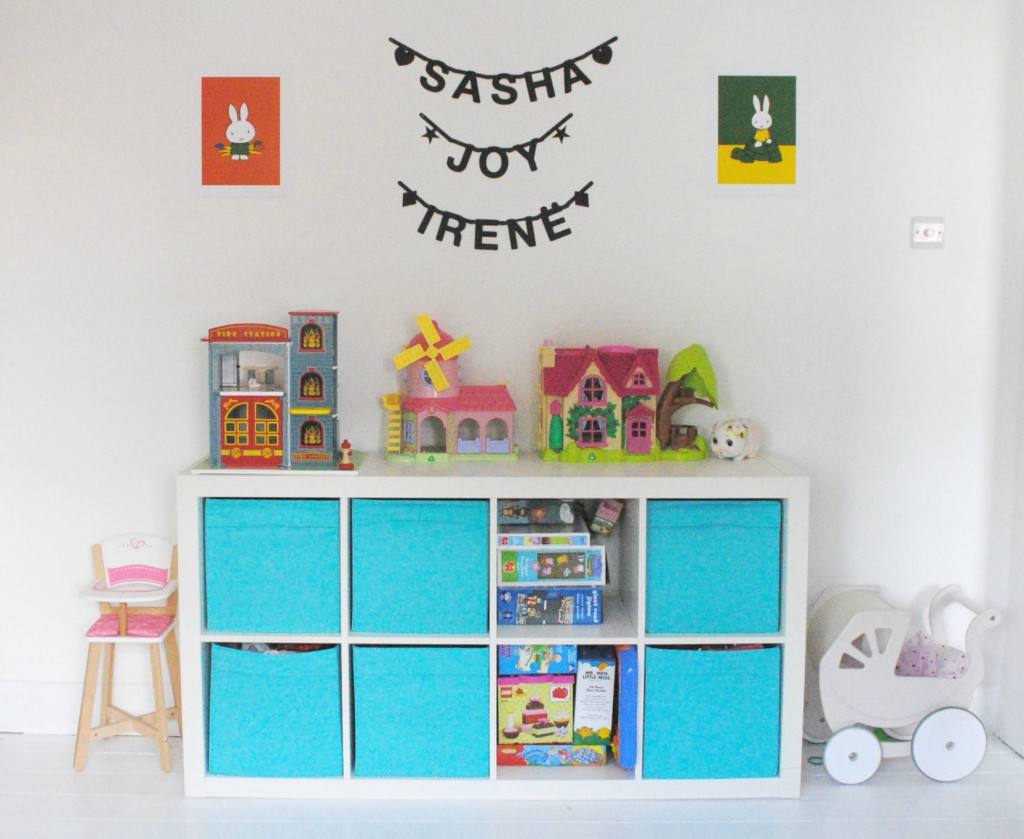 This is the end of Sasha’s room opposite the window and nearest the door. If it doesn’t look like this ‘goes’ with the rest of the room, then hold fire- a photo a bit further should show you how it all works! I just thought 4 walls of the wallpaper would make it look too enclosed and ‘busy’. The Expedit is also from Ikea and was from Sasha’s old room, but this design classic has now been discontinued (RIP, Expedit). However, the Kallax range from there is pretty similar and would do a job. I love this unit, as it holds so many toys, plus it’s easily accessible for little ones.

The black letters are from Not on the High Street by a company called ‘Bimbly’. I’m such a stylishly original blogger, right? 😉 Seriously, I do like these, and they’re doing a great job at the moment, but they’re a bit of a stop-gap for now until I decide what I want to do with this space. I can’t decide if I want to buy another Miffy print (these are c/o Miffy) to go in the middle of the two featured here, or create a bit of a picture wall with some other prints. I just don’t want to be drilling holes all over the place until I’m sure! 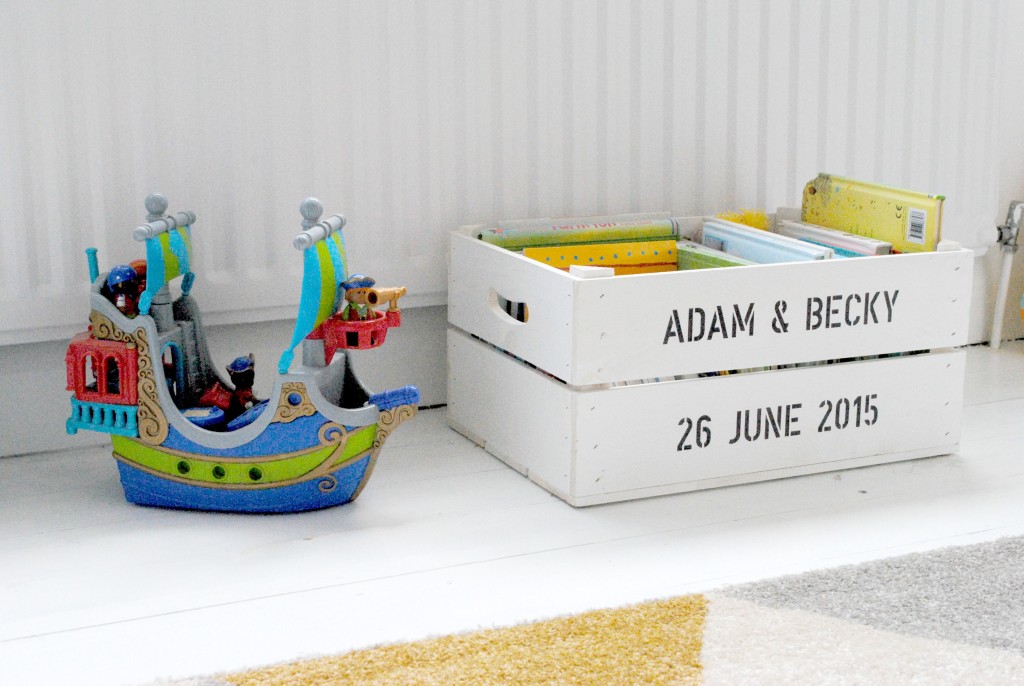 The crate is a nod to mine and Adam’s wedding back in June, which we used for cards from our lovely guests. It’s actually quite big so I wasn’t sure where to put it in our home, but didn’t want to get rid of it for sentimental reasons. Since Sasha’s room doesn’t have a proper bookshelf yet (Freddie has a big one in his room, plus they have 3 shelves on ours in the living room), I thought this might be a good compromise and it actually holds quite a few books. I’m also going to get away with whilst a.) she can’t read and b.) she isn’t too old yet to think of her parents as being terminally uncool, and therefore wouldn’t touch this with a barge-pole. The crate is also from Not on the High Street (I should totally have a loyalty card for that place), and by a company called Plantabox. 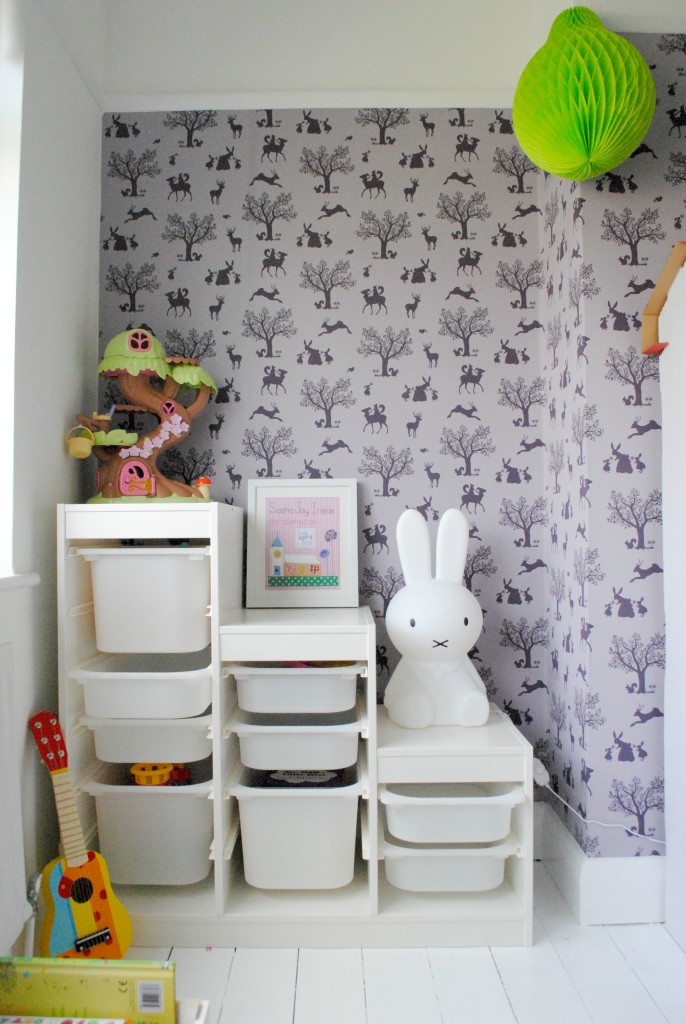 This trusty Trofast storage is from — wait, you’ve guessed it– Ikea, and is the same as in Freddie’s room. Like his bedroom, since the wallpaper is bold and detailed, I decided to keep the boxes plain white. I am officially a flat pack furniture queen now!

The Miffy night light is something I’ve been coveting for ages, and I knew Sasha would love it as she’s a genuine Miffy fan. It’s fab as it dims, so you can have it as bright (or not) as you want, which makes me sleep a little easier at night as she’s a bit of a 3am bed-hopper. So annoying as it is, I have peace of mind that she’s not going to take a wrong turn and stack it down the stairs in the dark! This is from Not on the High Street too, from a seller called Nubie, and was probably my second biggest splurge.

The green, pear-shaped honeycomb lantern is from Ikea too, and this and the pink one add a little extra ‘pop of colour. 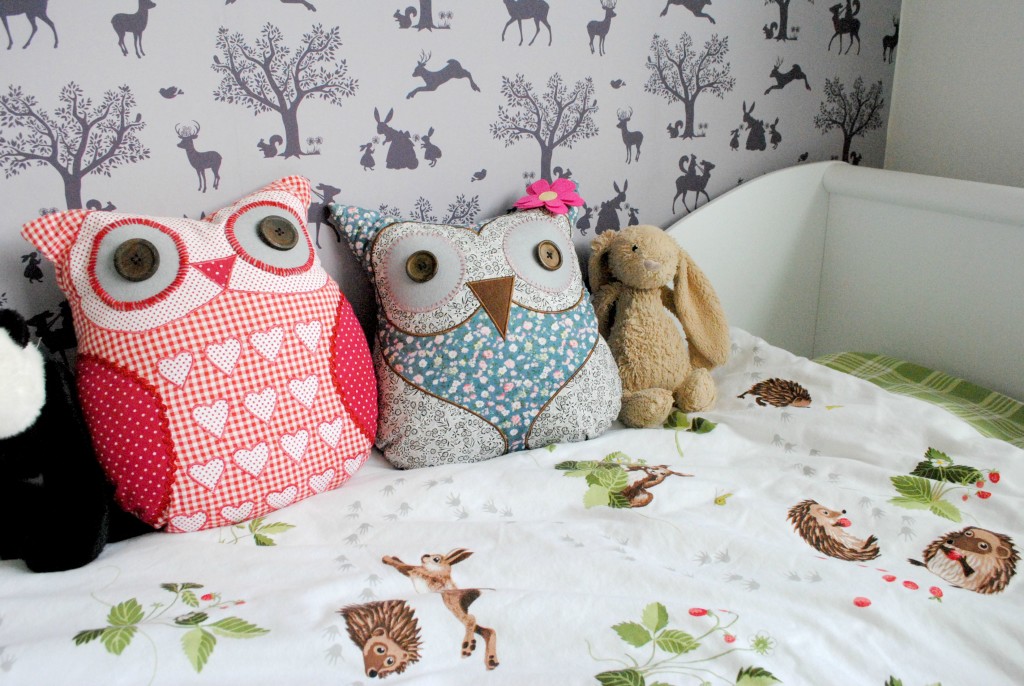 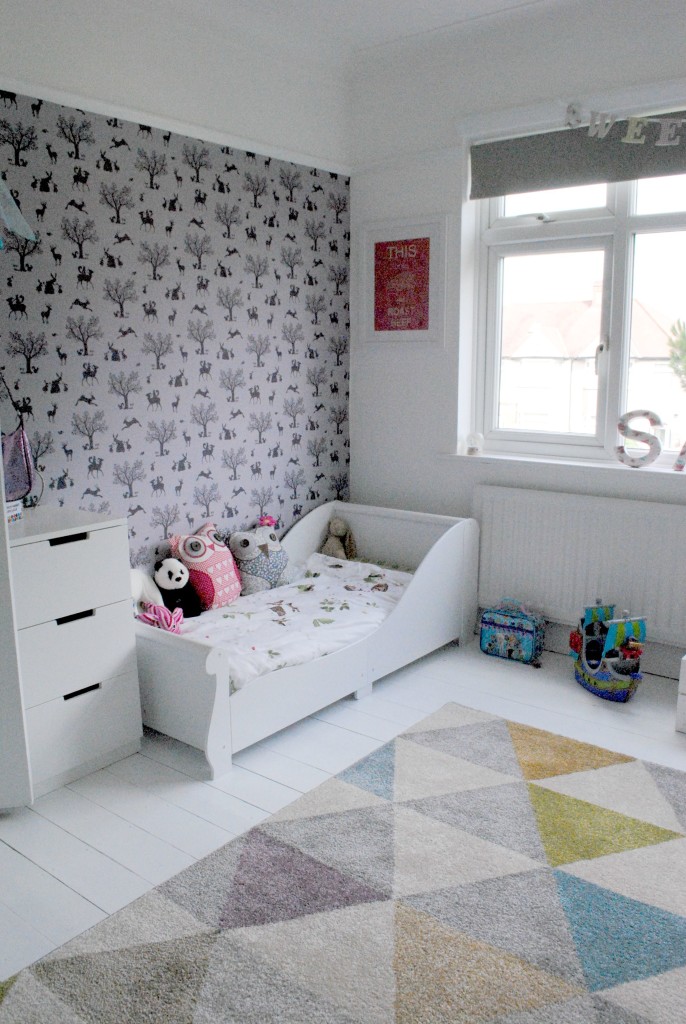 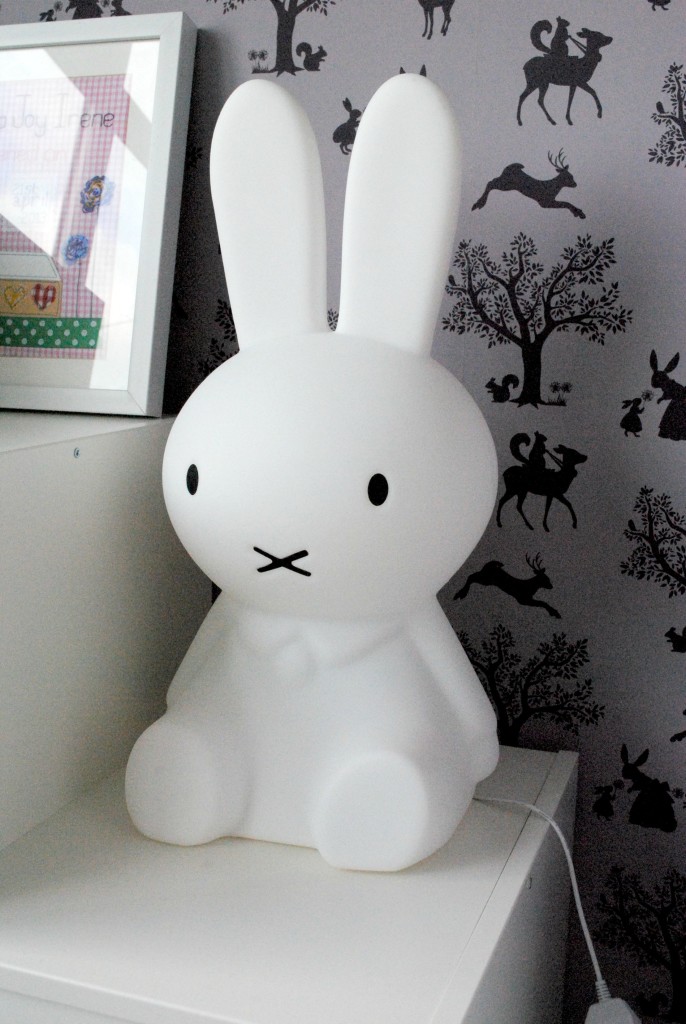 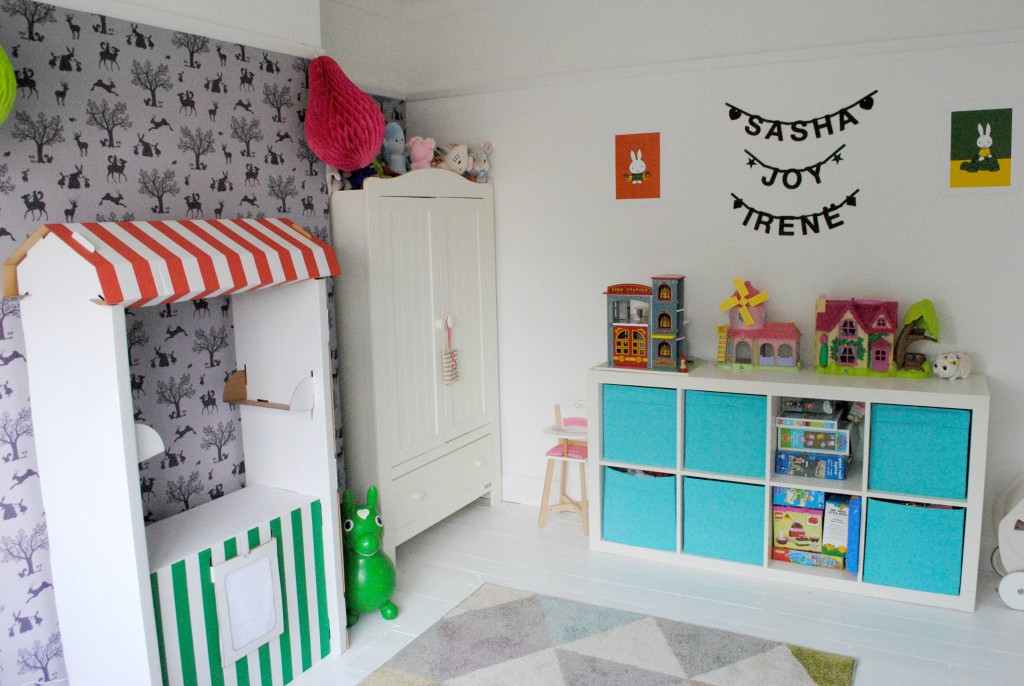 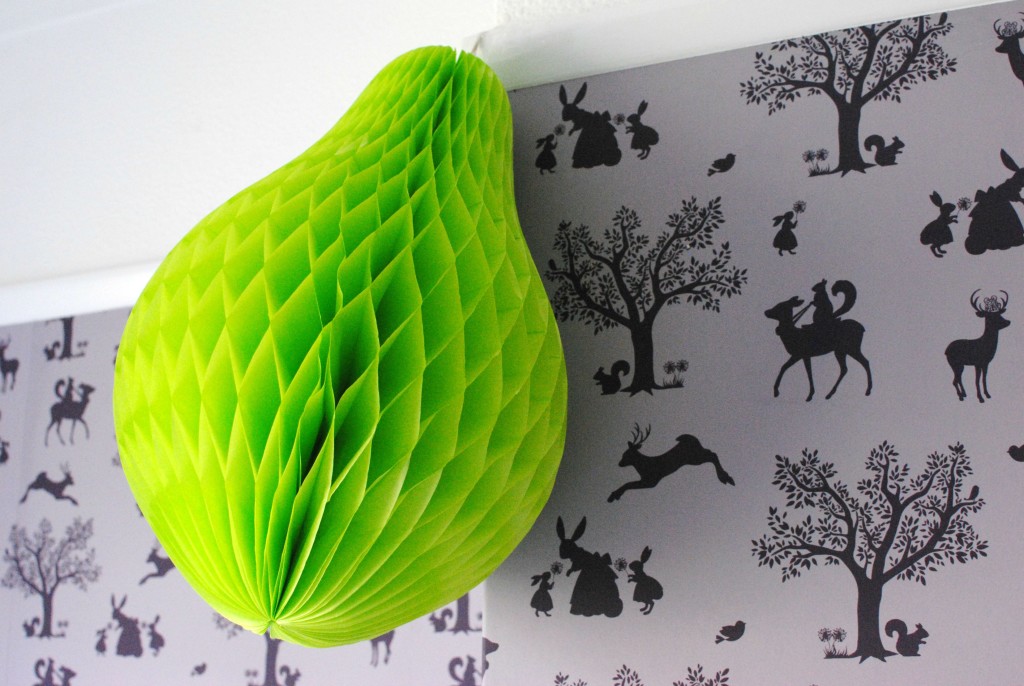 So there you have Sasha’s new bedroom!

I must admit, I’m pretty chuffed with it, as I love it, and most importantly, so does she. I hope I’ve shown that can have childlike AND stylish, without compromise. I’m also crossing fingers that this room has several years of life in it, but what’s good is that because the furniture is plain white and quite classic, and the floor white too, it actually wouldn’t be too much of an expense if she does want to change the walls at some point in the future.

Do you like it or is it too much for you? I’d love to hear your honest opinion 🙂