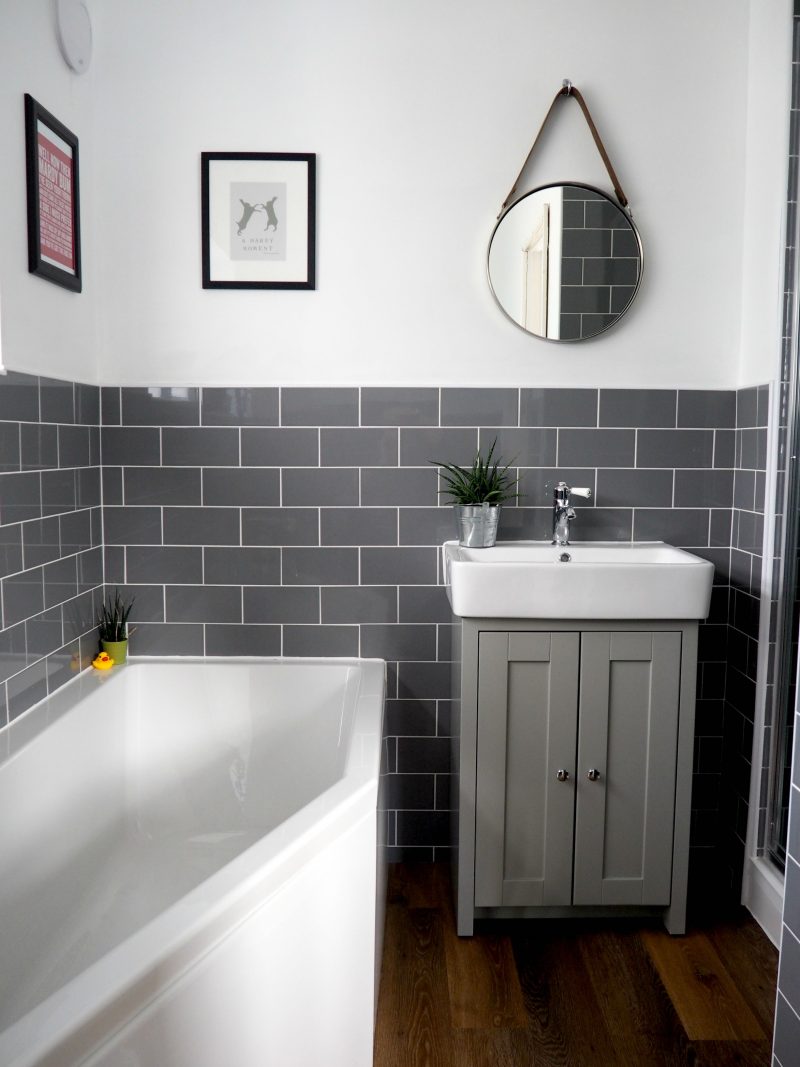 When we were first looking for a new house to buy last year, and had a look around what is now our new(ish) home, I have to admit one of the things that I was really unsure about was the size and state of the bathroom. You see, in our old home we had renovated the bathroom there to our exact taste, and also it was huge, due to knocking the separate toilet and bathroom through to make one big bathroom and removing the old water tank to create a gorgeous walk-in shower.

I’m usually quite good at visualising what even the most grim room can look like with a makeover, but the slightly odd shape and size of this bathroom was putting me off. In the end though, you have to make a compromise somewhere (most of the time, unless you’re super-rich!), and we decided that whilst we might not have as bigger bathroom as we had before, the rest of the house, garden and location had really positive points and to be honest, the space wasn’t THAT small really.

We knew that after Christmas we would be having our kitchen renovated, so decided to get the bathroom done at the same time due to the fact it was so grim (check out the turquoise tiles with the beech units and black surfaces- lovely!) and there was a slight leak from the bath.

Here is what it used to look like- yuk! 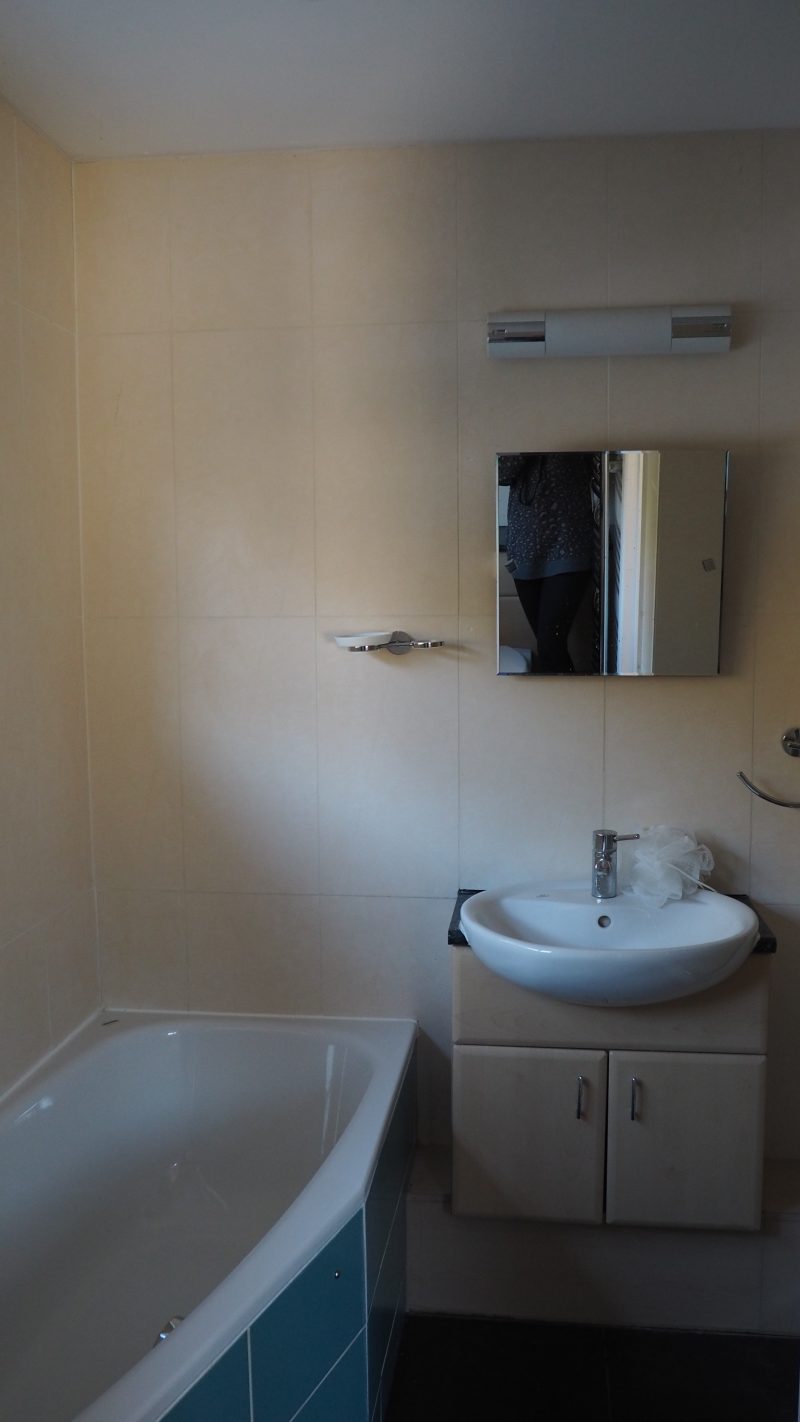 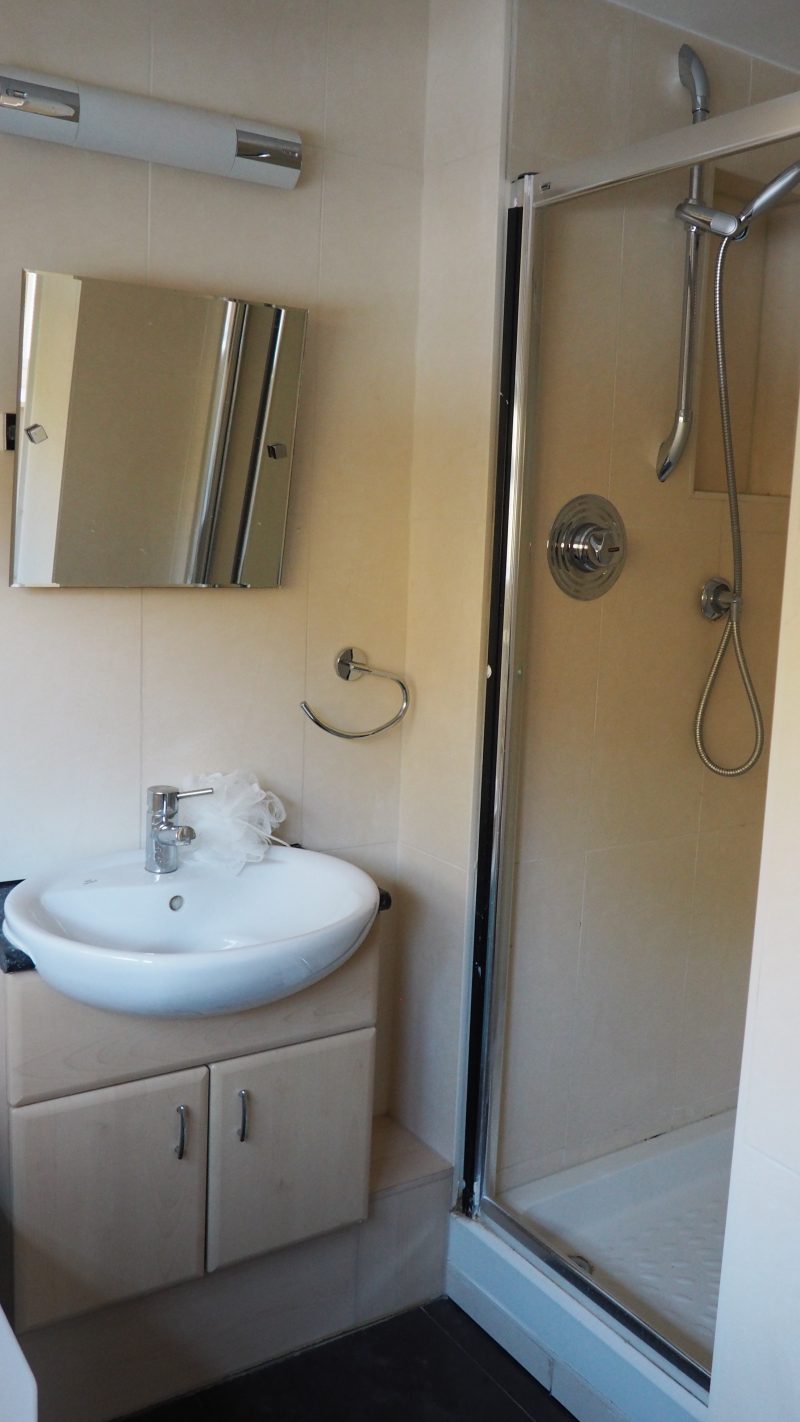 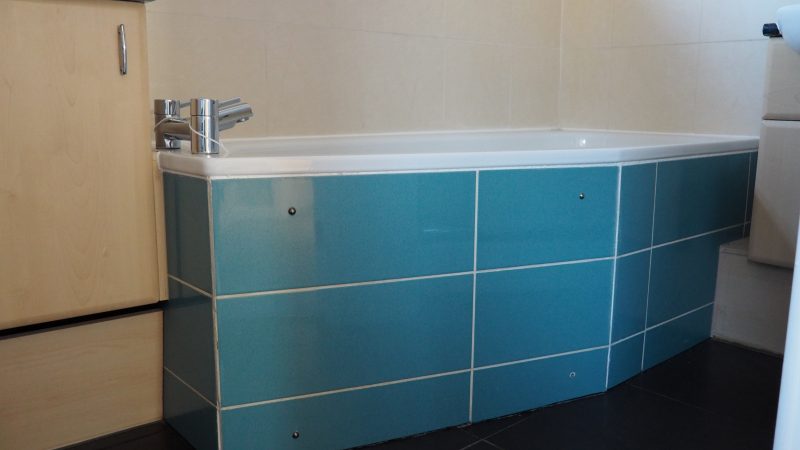 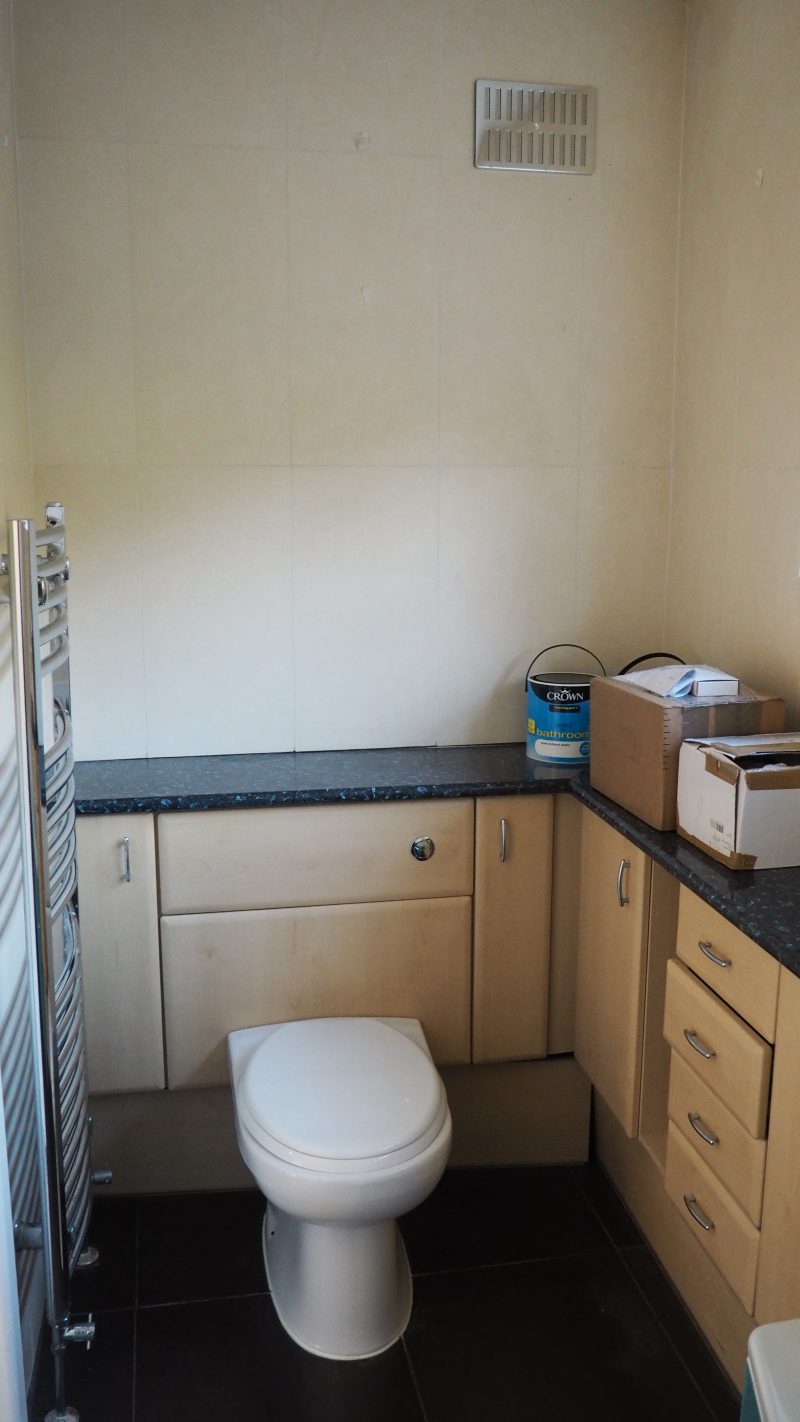 I still absolutely loved the style of bathroom that we’d created in our old house– the colours and style of bathwear/tiles we’d used, so would’ve happily recreated this in our new house, but we decided to start afresh and go for something slightly different, by turning the colour scheme ‘upside down’. So instead of having white tiles and grey walls, we decided to go for grey subway tiles halfway up the wall, with white walls above. I still love subway tiles and they are a classic, so decided to go for these again, despite toying with herringbone pattern, and once more we’ve been really pleased with the result.

If you love something, then there is absolutely nothing wrong with going for it, even if some hipster interior types might find it passe now!

We decided to keep the toilet in the same place (although installing a new one), and created a much bigger feeling of space by ripping out the hideous built-in units around it, plus we added a lovely traditional-style towel rail similar to what we had in the old bathroom. 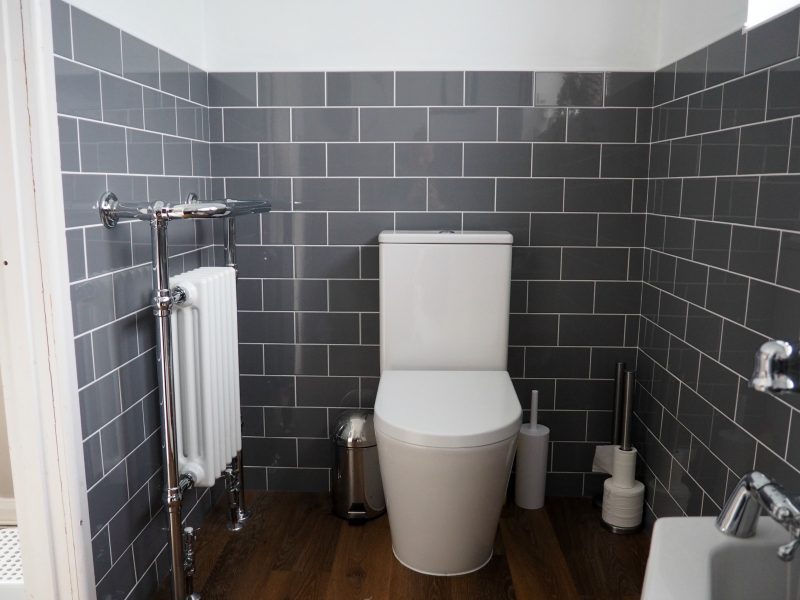 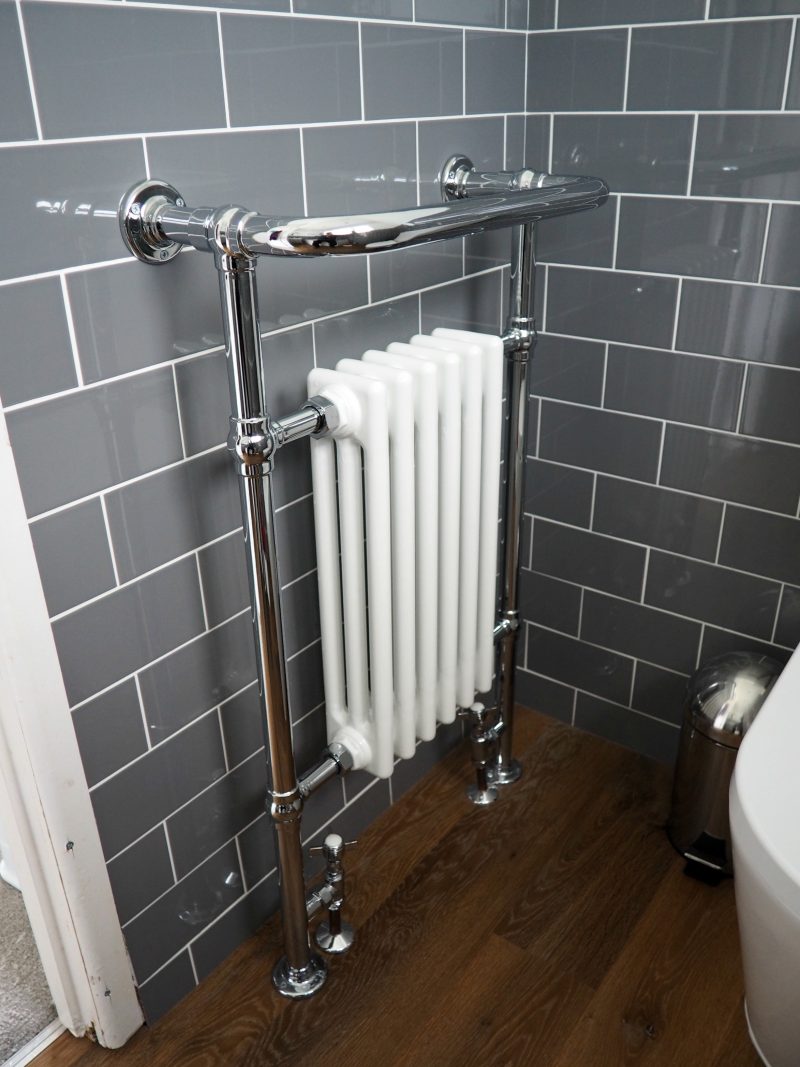 What makes our new bathroom a little awkward space-wise is the fact that if you want a separate bath and shower (as we did), there isn’t actually much room for a bath along with the shower and sink unit. Whilst we worked out we saved over £1000 by shopping largely via Ebay stores rather than specialist bathroom stores, we had to buy a special ‘space saver’ bath and the shower screen from one of these as we simply couldn’t find them anywhere online.

I was worried about what the space saver bath would look like once installed, what with it being the shape it is (it essentially has a corner cut off it so you have one wide end, and then one narrow end. Once it was in though I was actually really pleased as it still felt big when having a soak, and looked exactly like it was meant to be there. 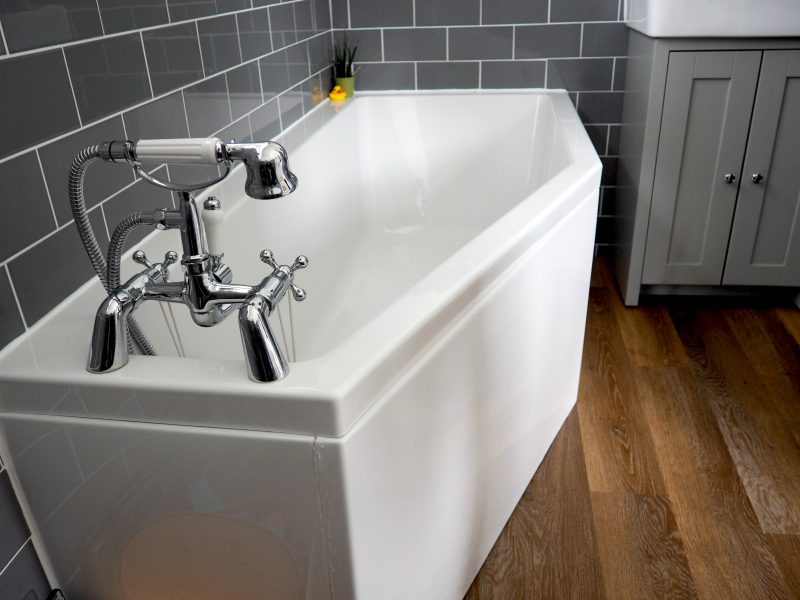 Our sink unit is a ‘Tavistock’ Floorstanding bathroom unit but bought at a cheaper price from an Ebay store, and we bought a bigger version and different colour to our loft room en-suite in our old house as we really liked the look of this there. 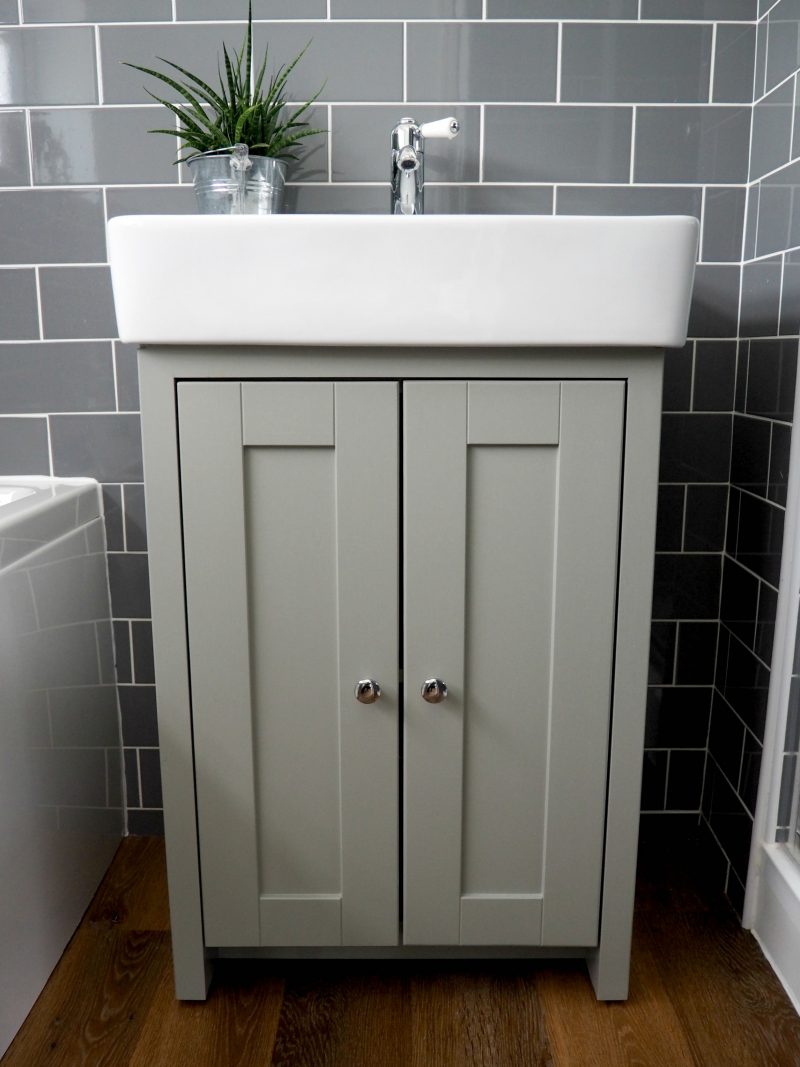 Our sink mixer tap is by ‘Burlington’ and were from the same range as the ones in our previous bathroom. Can you tell we really liked what we did in our old house?! 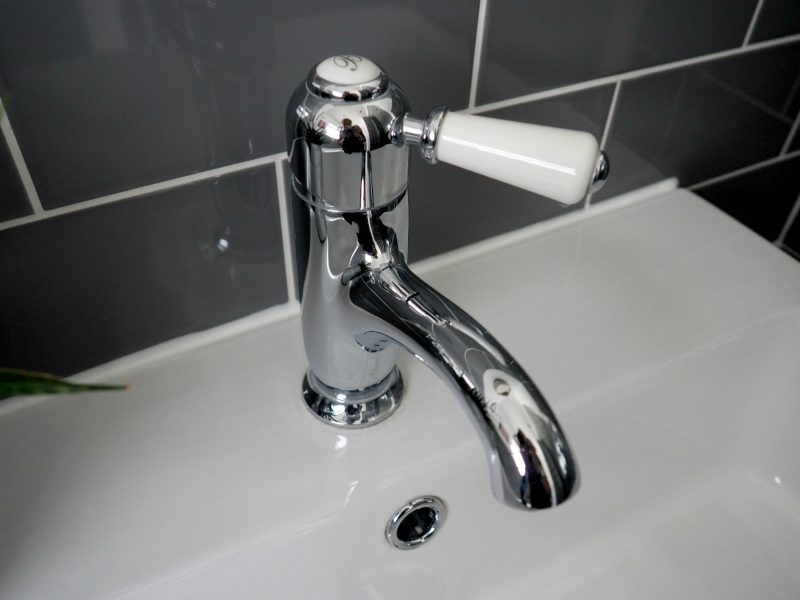 When it came to our shower, we chose a large traditional shower head with exposed valve as I love the industrial look that it gives, and we tiled the whole of the inside of the shower in grey subway tiles to match the rest of the bathroom. 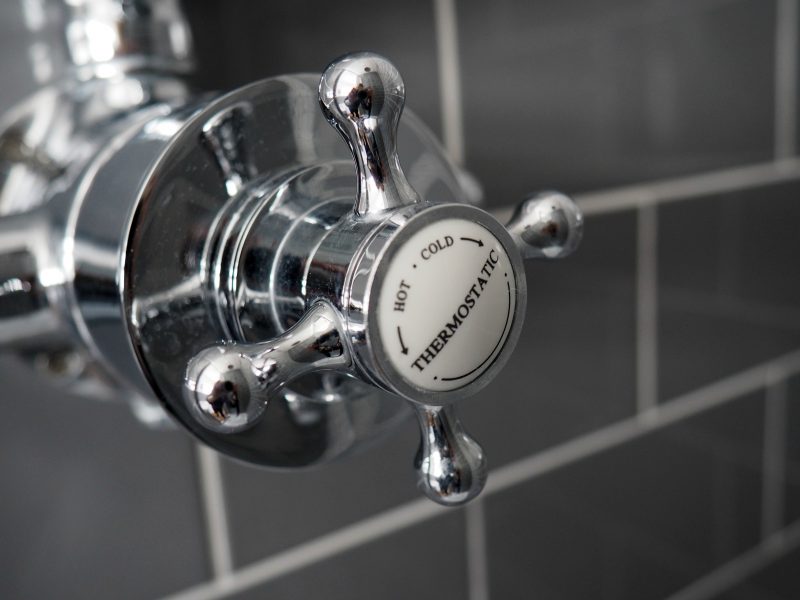 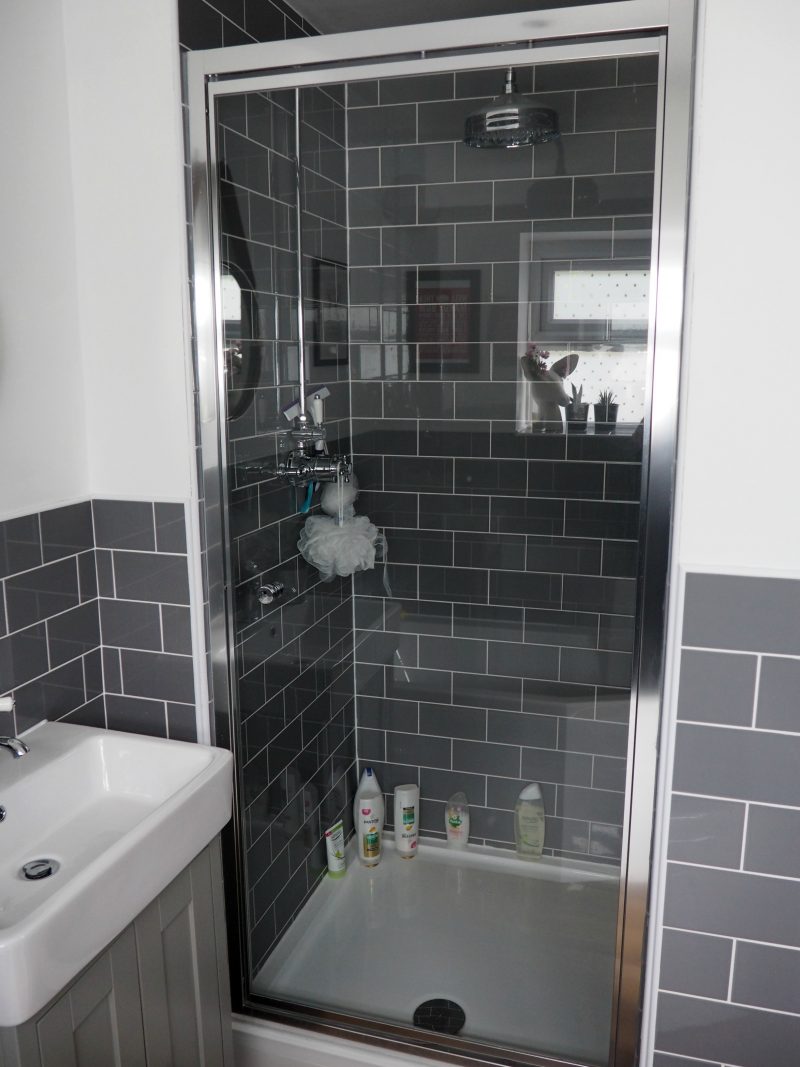 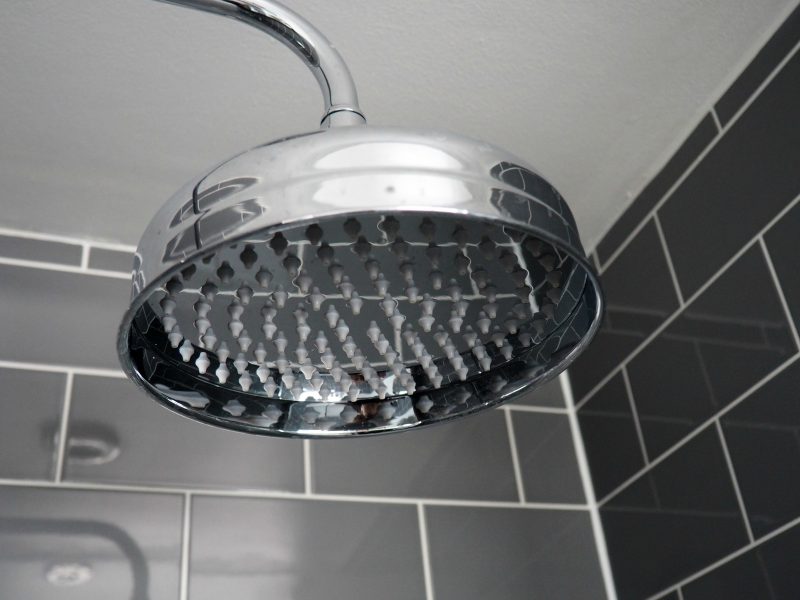 Our flooring is Amtico, and I thought a darker wood would look quite sophisticated and give the room a richer look colour-wise. 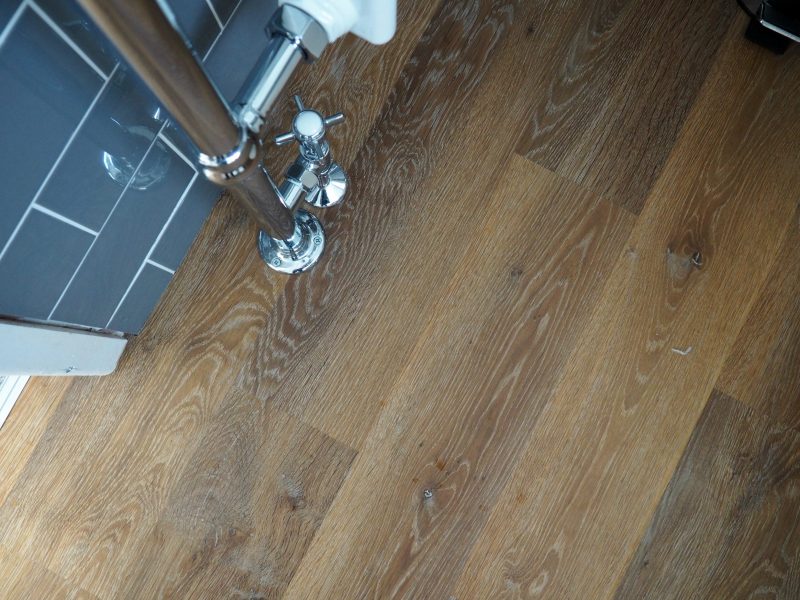 For the windows, we measured each individual window in the bathroom and ordered my favourite ‘star print’ window film to stick on carefully (I got my Mum to help me do this!). I just think it looks so much nicer than the usual ‘frosted glass’ and really jazzes the bathroom up. 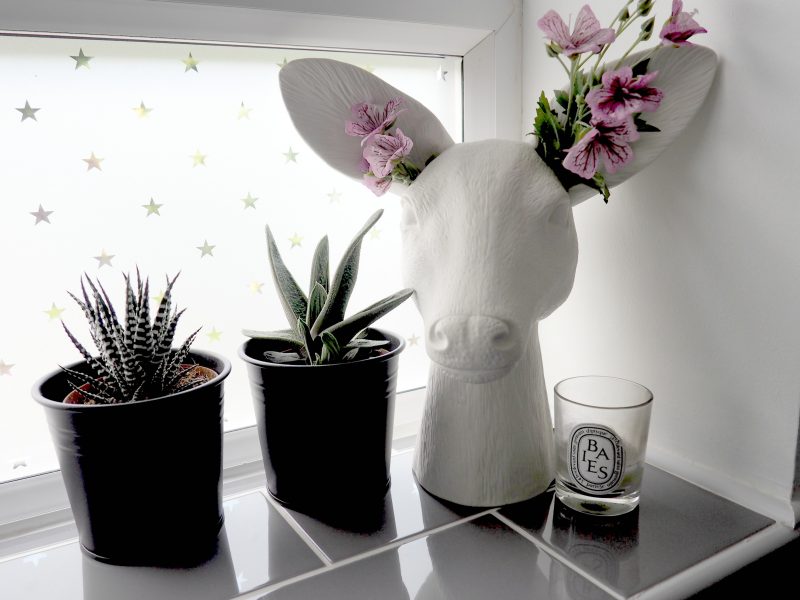 For finishing touches we’ve put up our round hanging mirror, bought a couple of years ago from M&S and what was hanging in our old living room, our Graham and Green ‘A Harey Moment’ print (in our old bathroom), and have just added this cool Arctic Monkeys lyric print of ‘Mardy Bum’ from ‘The Blue Butterfly Emporium’ on Etsy. My Anthropologie Deer Head Vase (the gift that keeps on giving as it is so versatile it has been in many different rooms!) is on the window sil, along with some succulents from Ikea and a couple of scented candles to give atmosphere when having a soak in the tub. 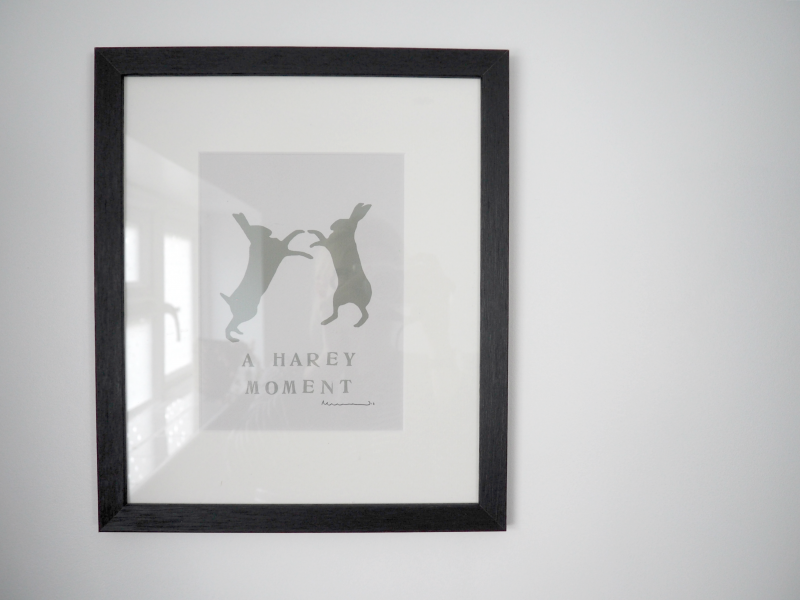 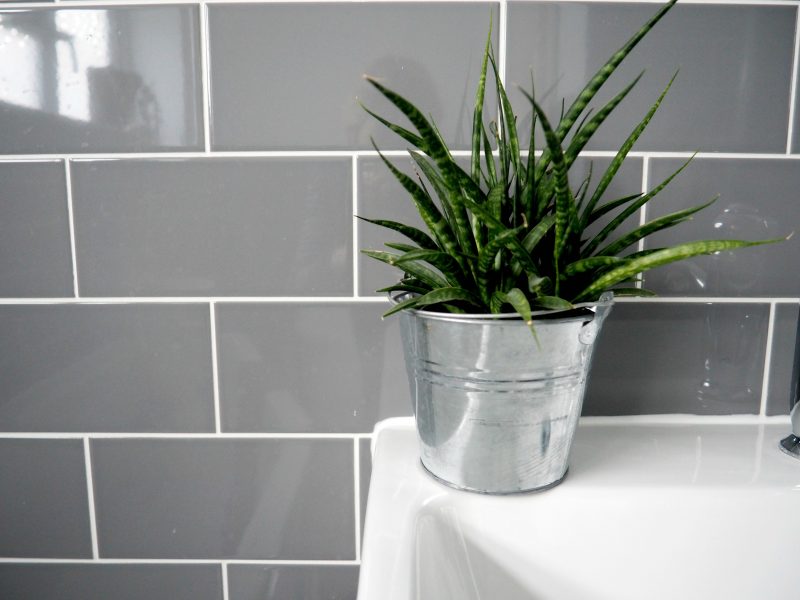 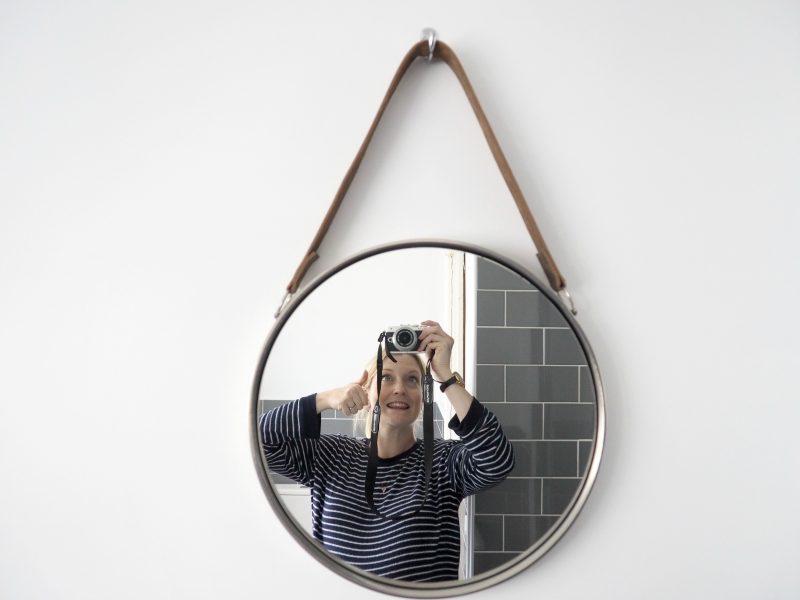 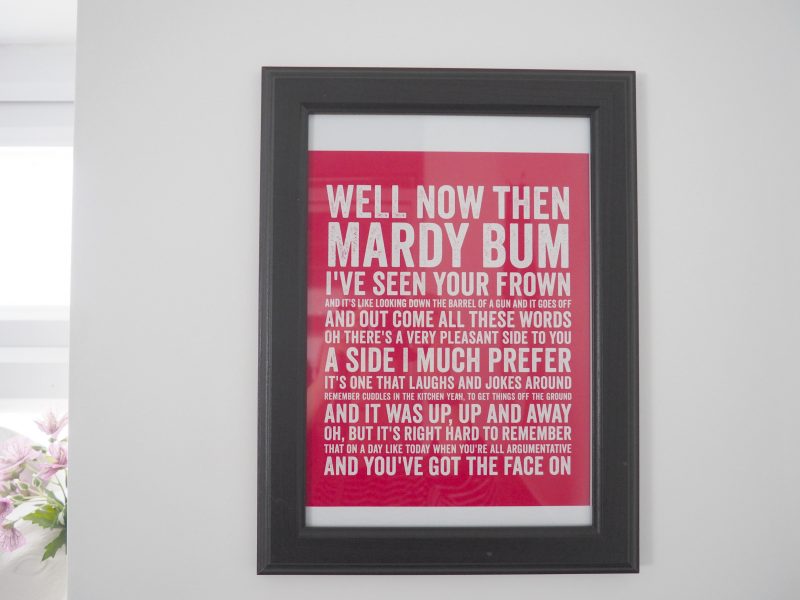 The only bit of the bathroom I’m still feeling is ‘unfinished’ is the walls above the toilet. I’m undecided whether to put a big print here, a few small pictures/prints, or even some industrial-style shelving to house maybe towels and also to add a bit of interest. What do you think? Happy to have opinions! 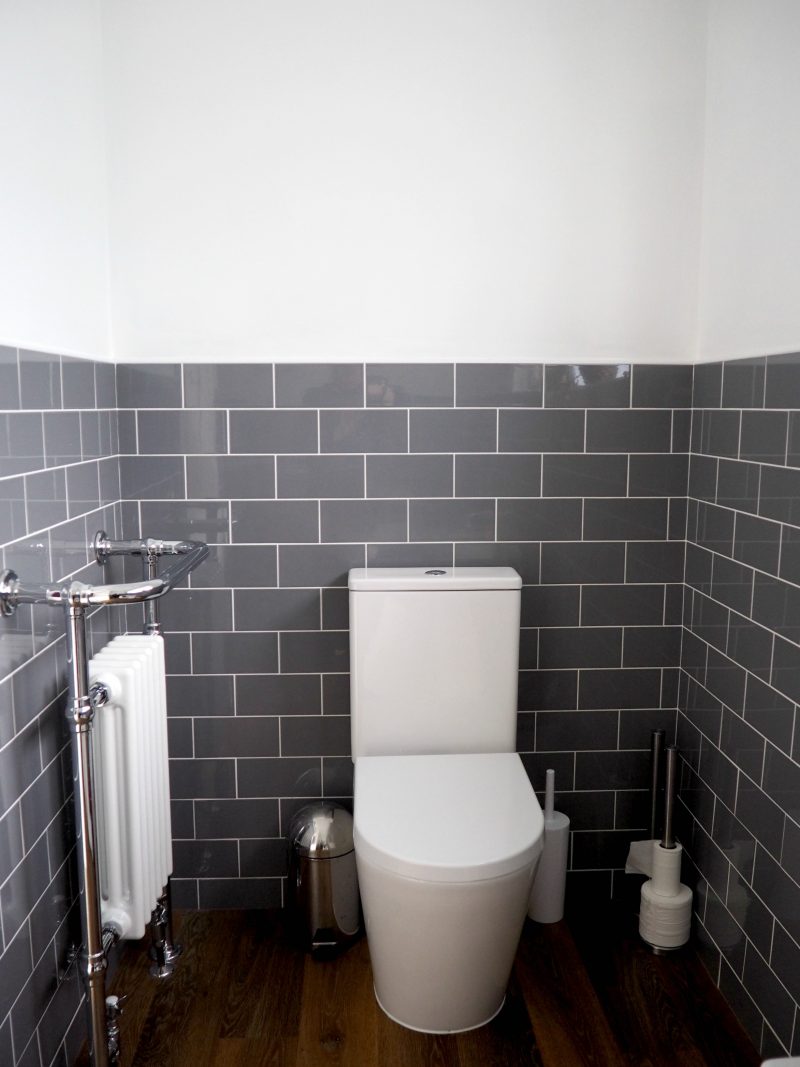 The bathroom ended up being quite a big job considering it’s not a huge space, as on taking off the old tiles it was discovered that the whole room would need re-plastering due to old plaster completely crumbling and falling off, and we added new spotlights too.

I’m SO pleased with what’s been achieved in this room, considering I nearly went against putting an offer in on the house because of the bathroom (duh!), and I’m glad we could see the potential it had. It really is a joy now bathing the children, or having a soak ourselves, and by managing the project and taking the time to source the majority of items from bargain online stores we saved ourselves a lot of cash too.

A double win in my eyes!