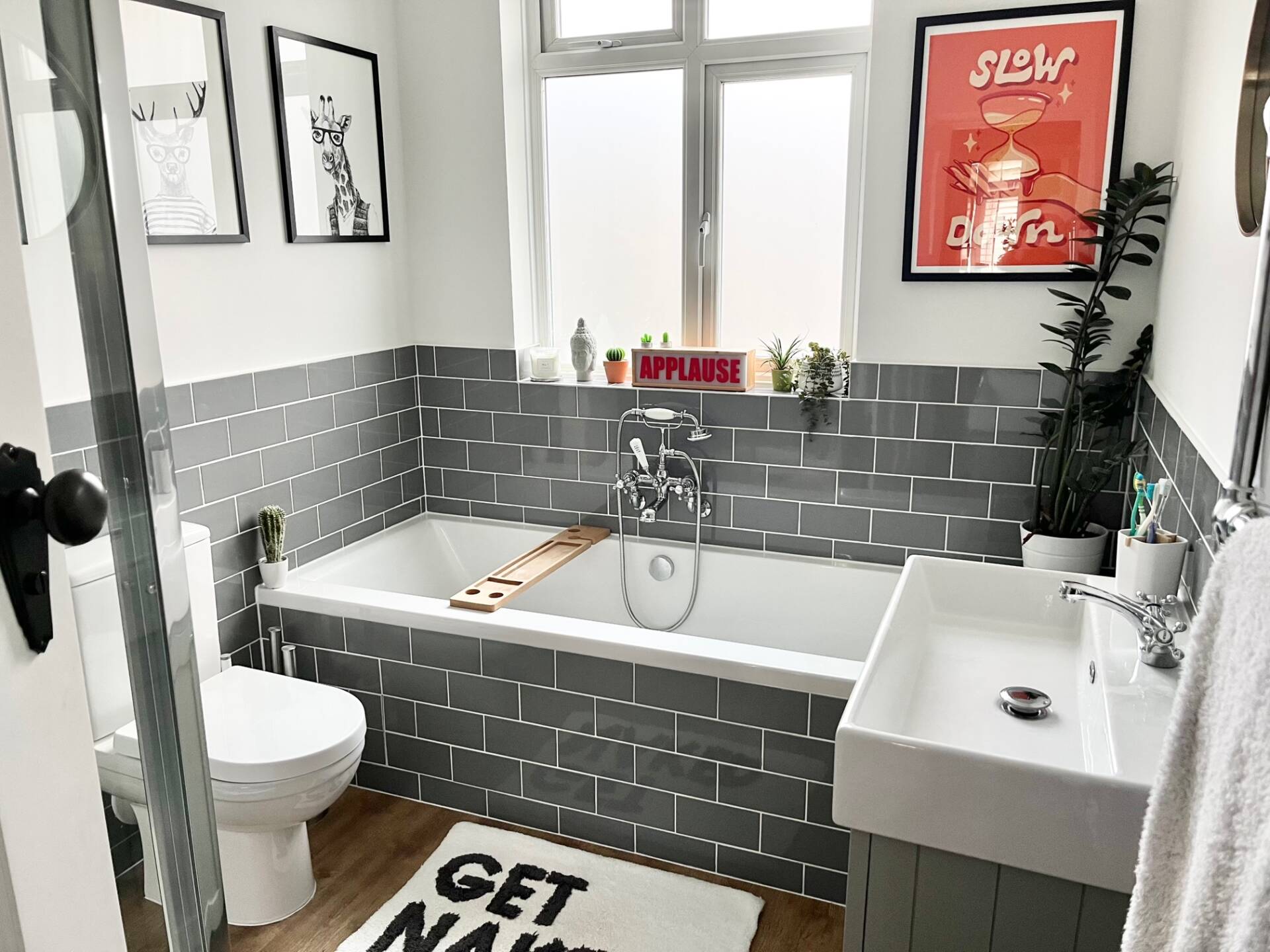 This is another post that I’ve been meaning to write for a while now- showing you the ‘before’ and ‘after’ of our grey bathroom renovation in our current house, complete with grey bathroom tiles, grey bathroom vanity unit, and a few pops of colour! Hopefully you can add it to your grey bathroom ideas ‘mood board’, should you be planning a similar renovation anytime soon.

After carrying out a huge downstairs remodel of our home in 2021, we knew that our upstairs bathroom wasn’t a priority and would be one of the last rooms in our house to finish, but once it was done, I was very, very glad that it was finally complete!

The old bathroom was definitely a game of two halves- one room that housed the toilet, bath and sink wasn’t toooo bad, if a little scuffy. The sanitary ware was plain white, in okay condition, as were the tiles, and after being given a lick of (badly applied!) green paint on the walls by myself shortly after we moved in, it definitely made the space bearable. The separate shower ‘closet’ (that’s the only way to describe it) was adjacent to the main bathroom, and to have a shower you had to shut the folding doors behind you. VERY claustrophobic and dingy with no natural light, and the whole cubicle had a build up of awful limescale everywhere (we’re in a hard water area so you need to keep on top of this kind of thing), making showering not the nicest of experiences! Definitely liveable, but we knew that at some point we wanted to knock both rooms together to create one big family bathroom space. 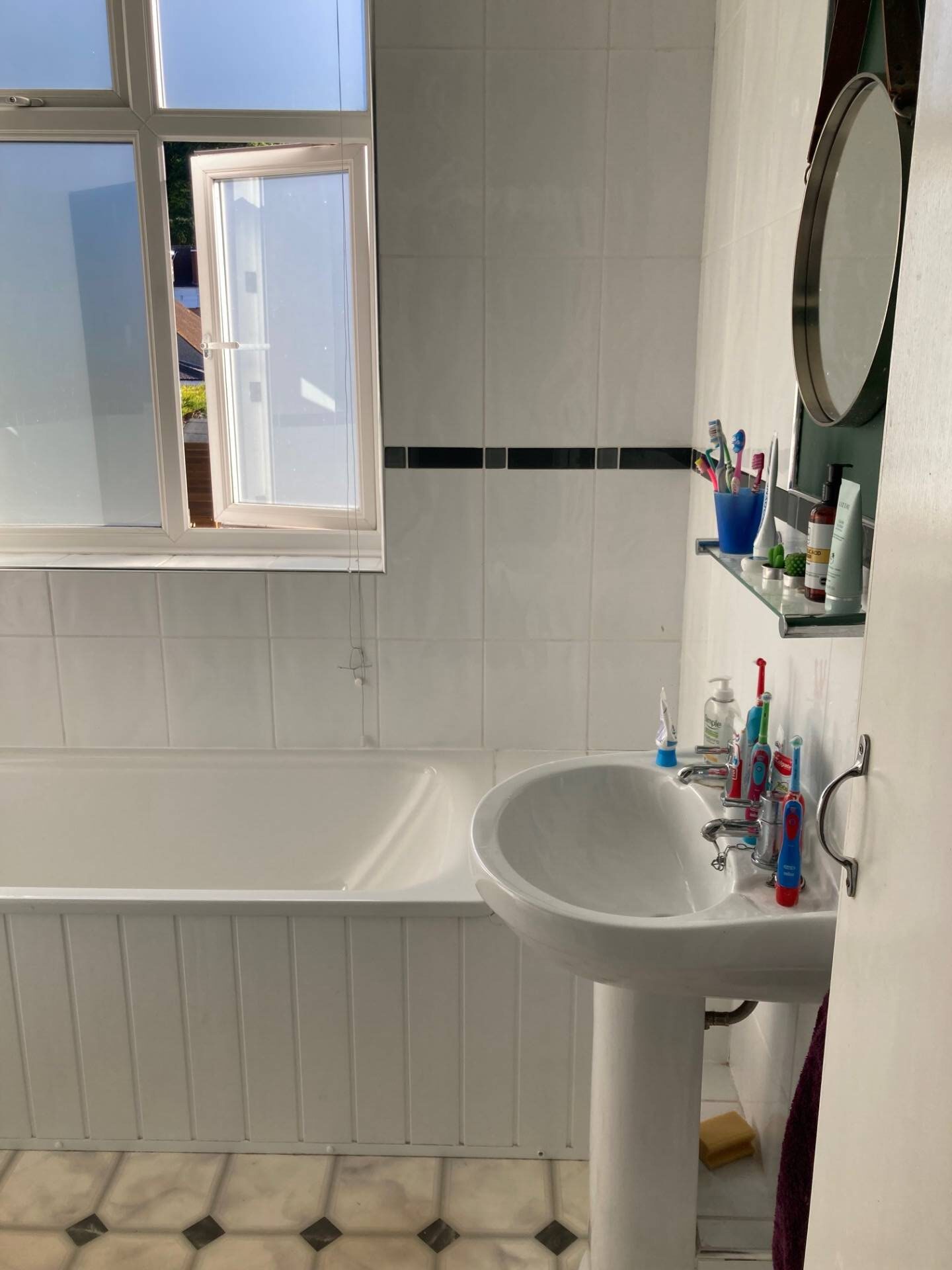 When it came to deciding on what style to go for, I was overwhelmed with choice, and actually found it quite tricky to decide, especially as I had a lot of work on at that particular point so spare brain space was more limited than usual! I was quite keen on having green walls still as I had liked the mini-makeover that I had given the bathroom previously, maybe with gold accessories, but any shower cubicles that I liked with a gold/brass trim were serious dollar, as were radiators/towel rails, and with a certain budget in mind, I wasn’t sure we could justify going all out with these things. Black taps can look great too, but as I mentioned before, we live in a hard water area, and I knew that the upkeep of looking after the black taps would become a big pain.

So, what did we go for? Well, we had only lived in our previous property for 2.5 years and had renovated the bathroom there, and to be honest, I really liked the grey bathroom style that we’d achieved (it’s actually one of my most pinned pins ever on Pinterest!), although the bathroom there was a little smaller. I began to think that it would actually be nice to go for a very similar style again (if it ain’t broke, don’t fix it, right?!), especially as we didn’t get much time to enjoy it before we moved house again. 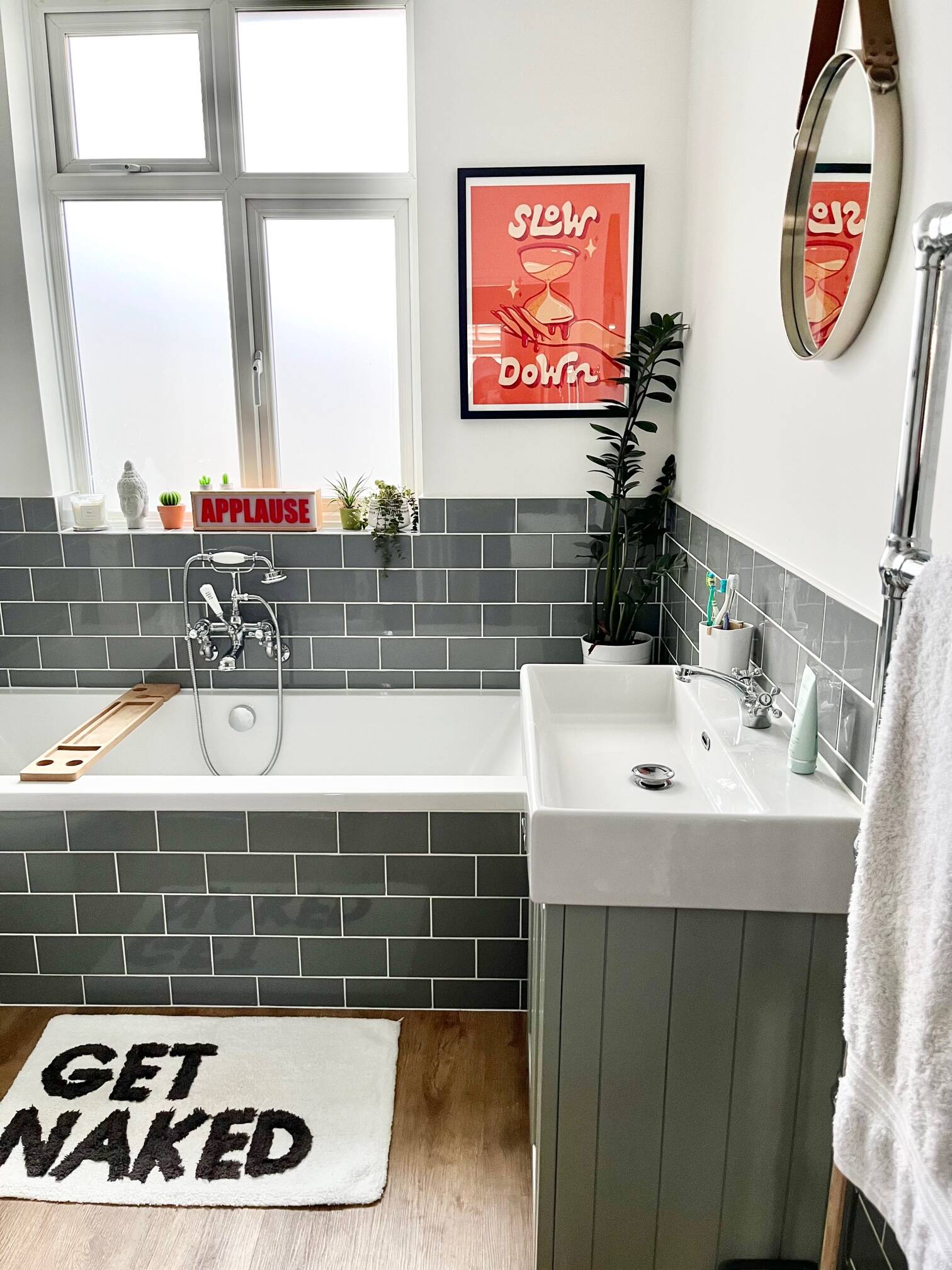 With this in mind, and considering some other grey bathroom ideas, and with our bathroom guys booked in, I began shopping around for the items to create a very similar look (I’ve listed everything near the end of the post, and linked where possible). The whole project took 3 weeks max, and the guys were fab and did everything – plumbing, installation, tiling and flooring – and we were so pleased with the end result! 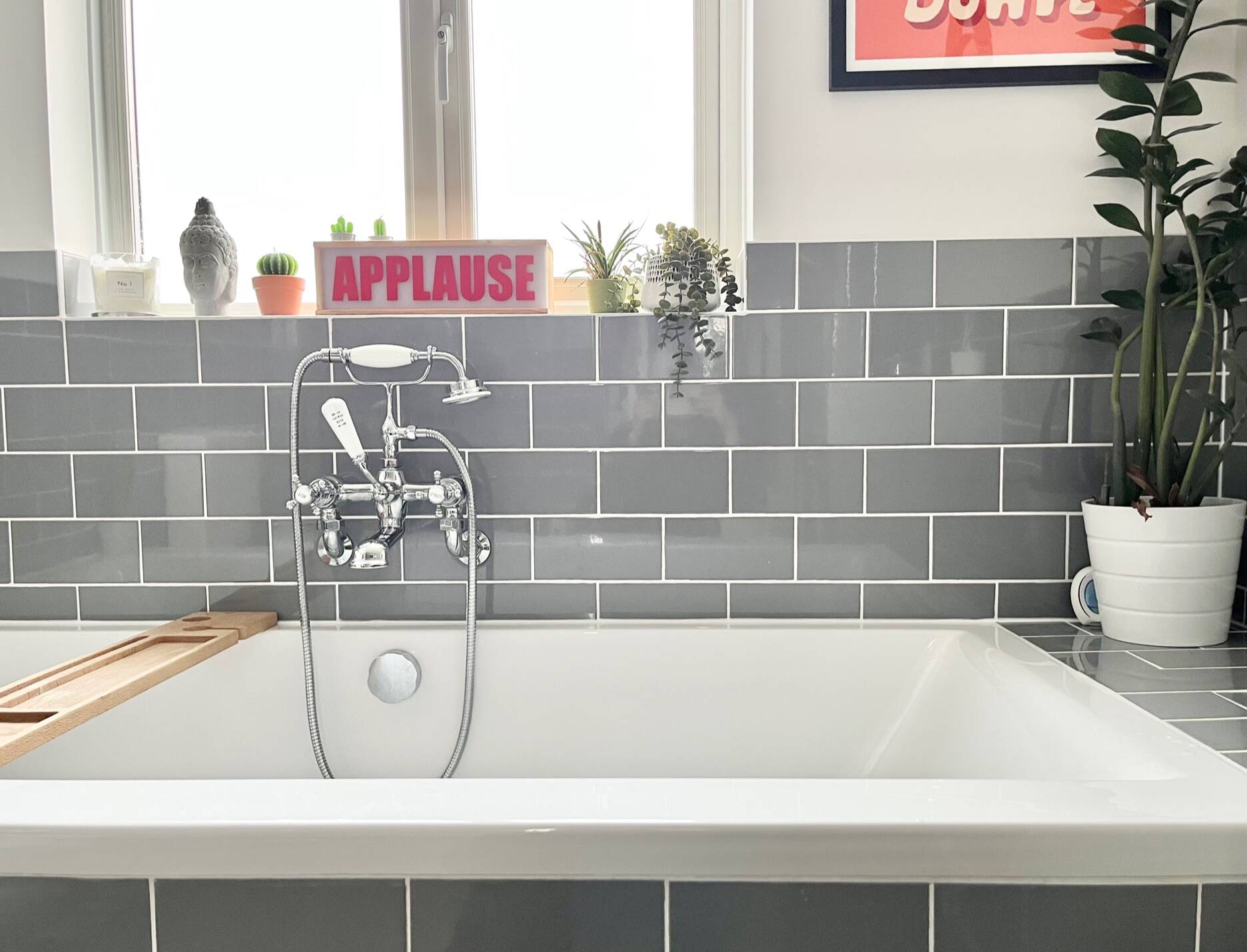 Our dark grey bathroom tiles set the tone of the whole room, and an extra-large bath was a must-have for us too. I love the look of freestanding baths (we had one in our first house), but actually I didn’t always find it that comfy to lie in as it was on the smaller side. The one we have now is perfect! So you can lie either end, we decided on traditional taps with a shower mixer that were mounted onto the wall. 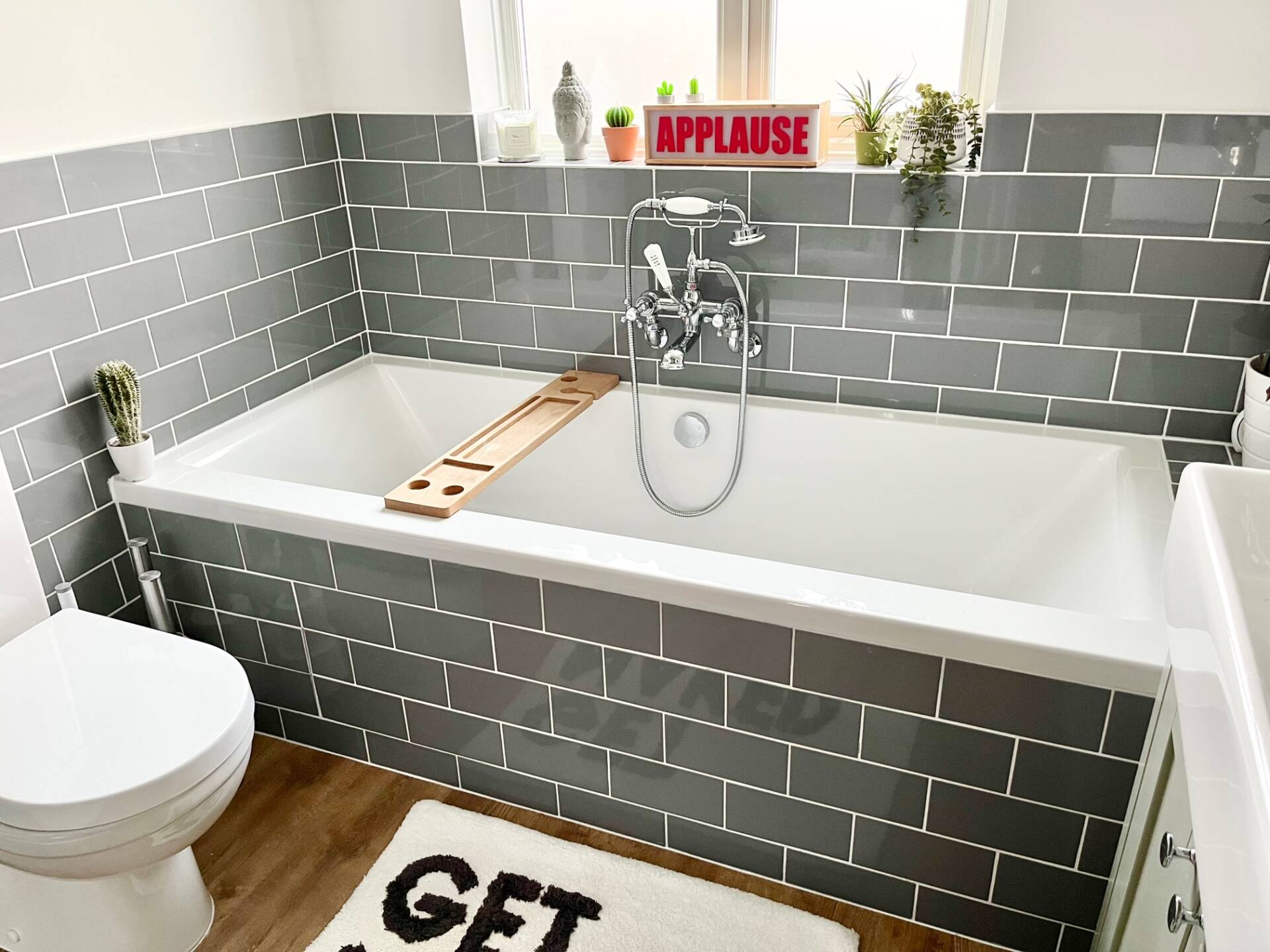 Our light grey bathroom vanity unit was from the same range as in our old bathroom, just in a bigger size, and really pops against the grey bathroom tiles, and our shower cubicle is complimented by a large chrome, traditional-style shower head. 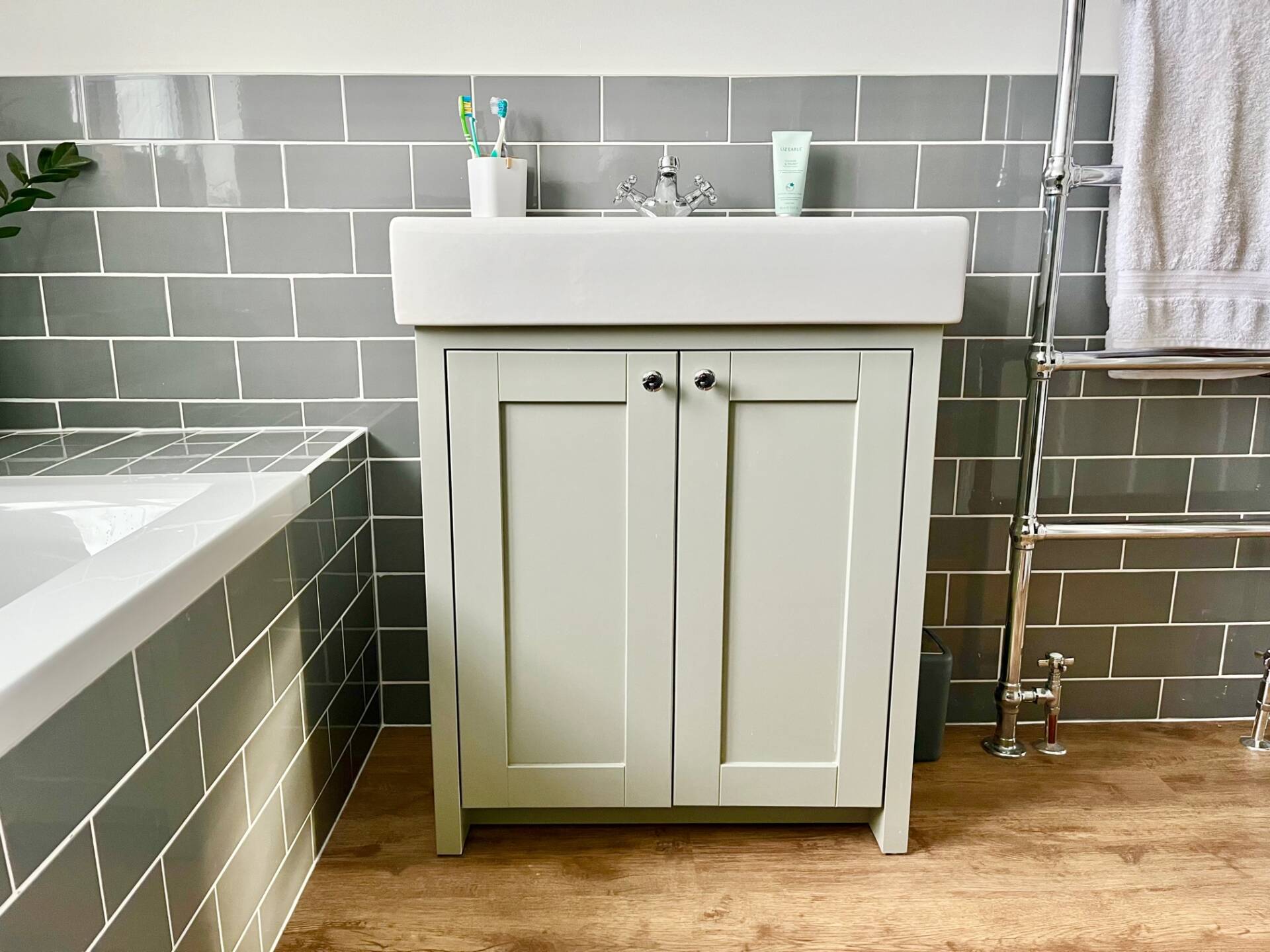 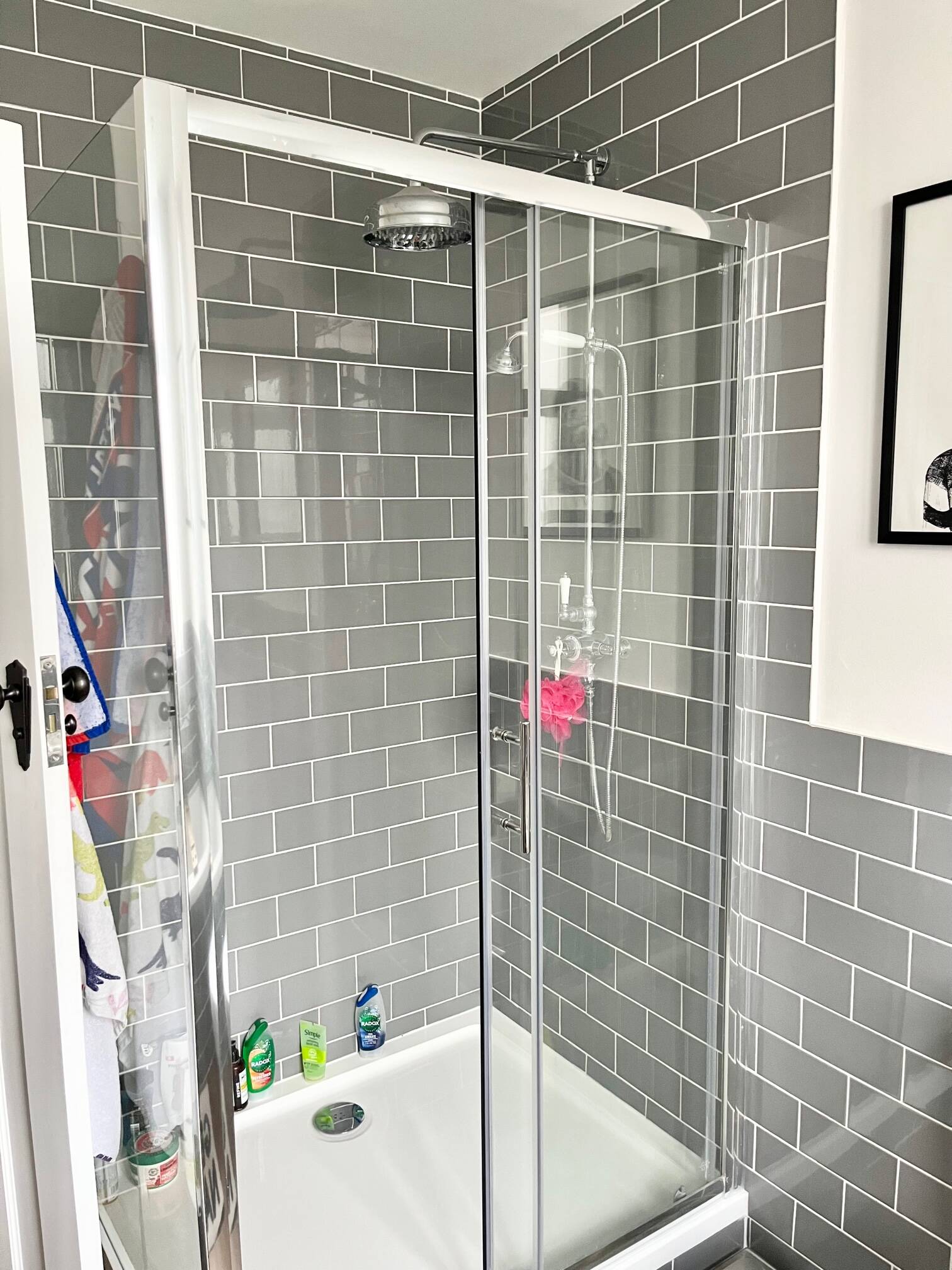 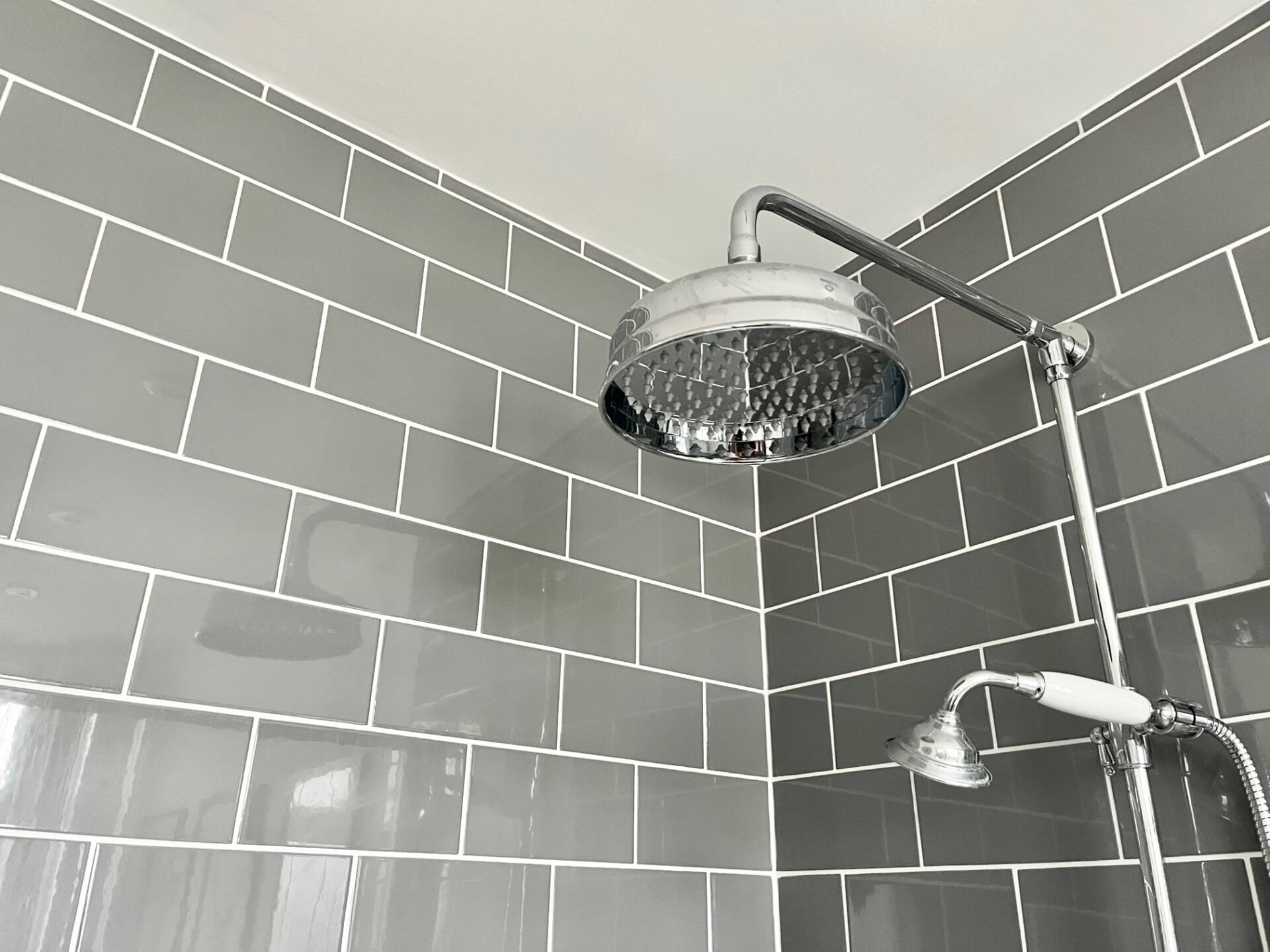 The traditional towel rail is very tall, which means it can hold several towels, which is ideal for a family of 5 like ours. 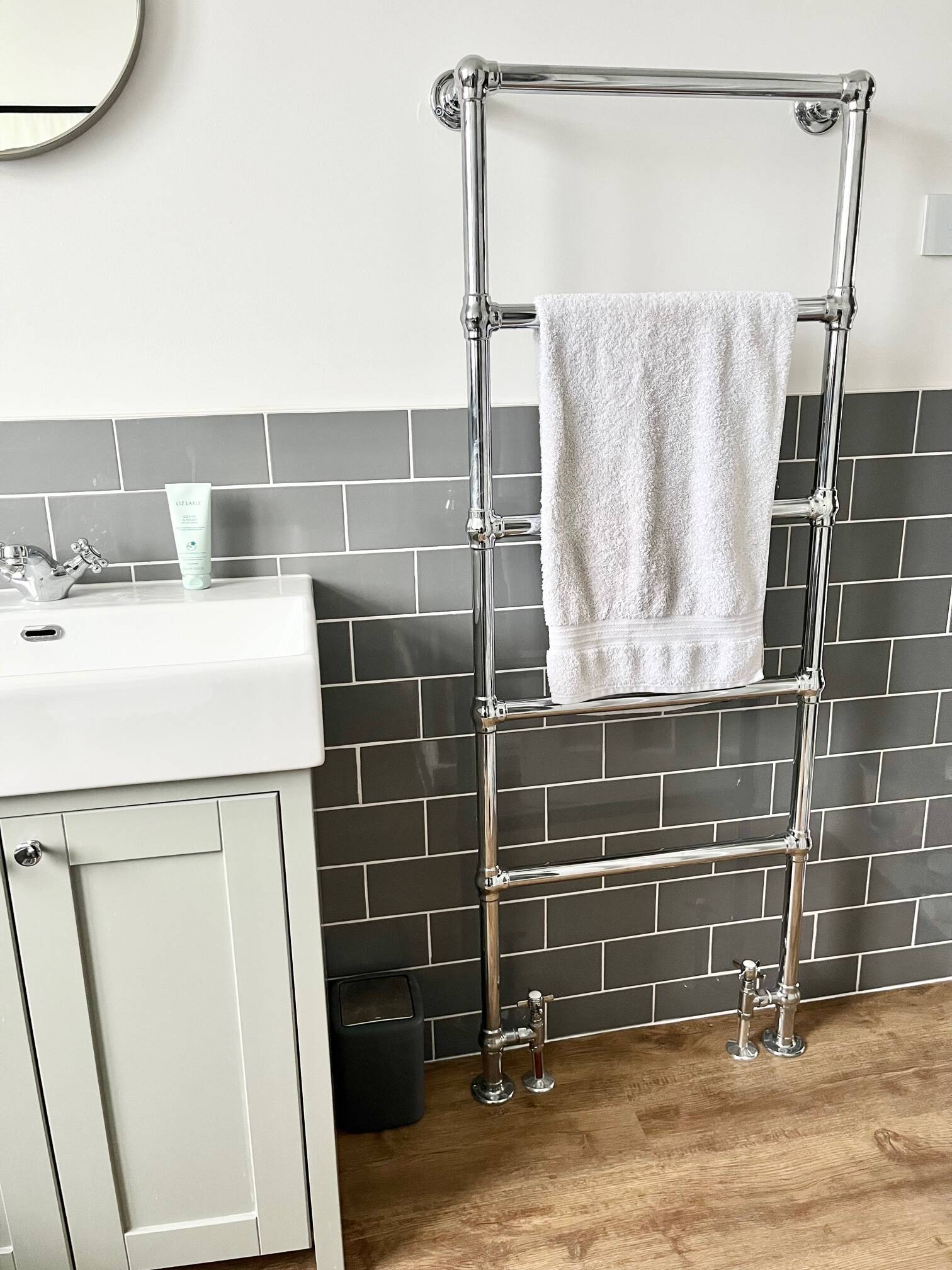 Whilst we kept it simple by painting the walls white, we’ve now added several bright and quirky prints, as well as some plants and candles that make it feel more homely and add a pop of colour. 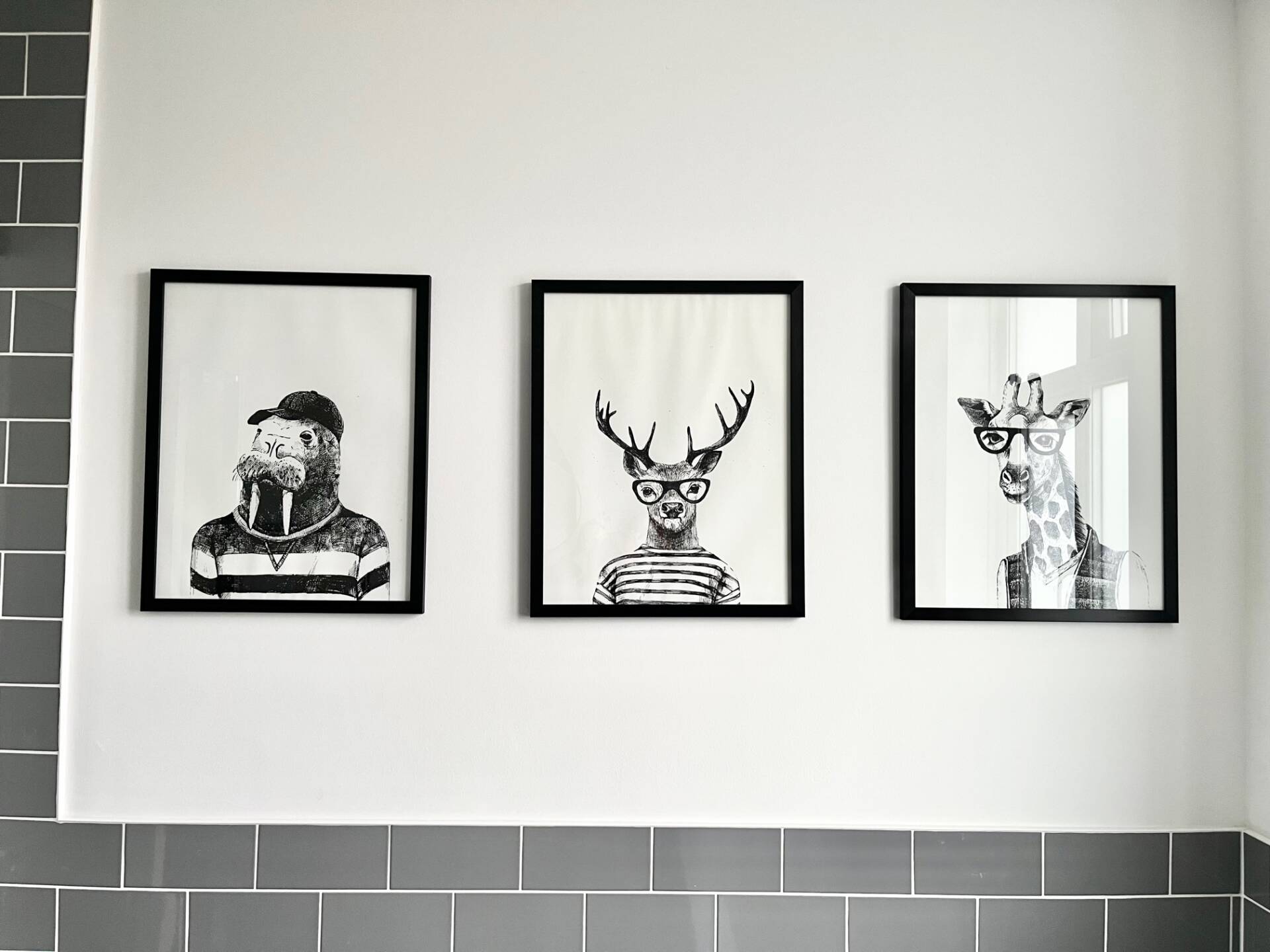 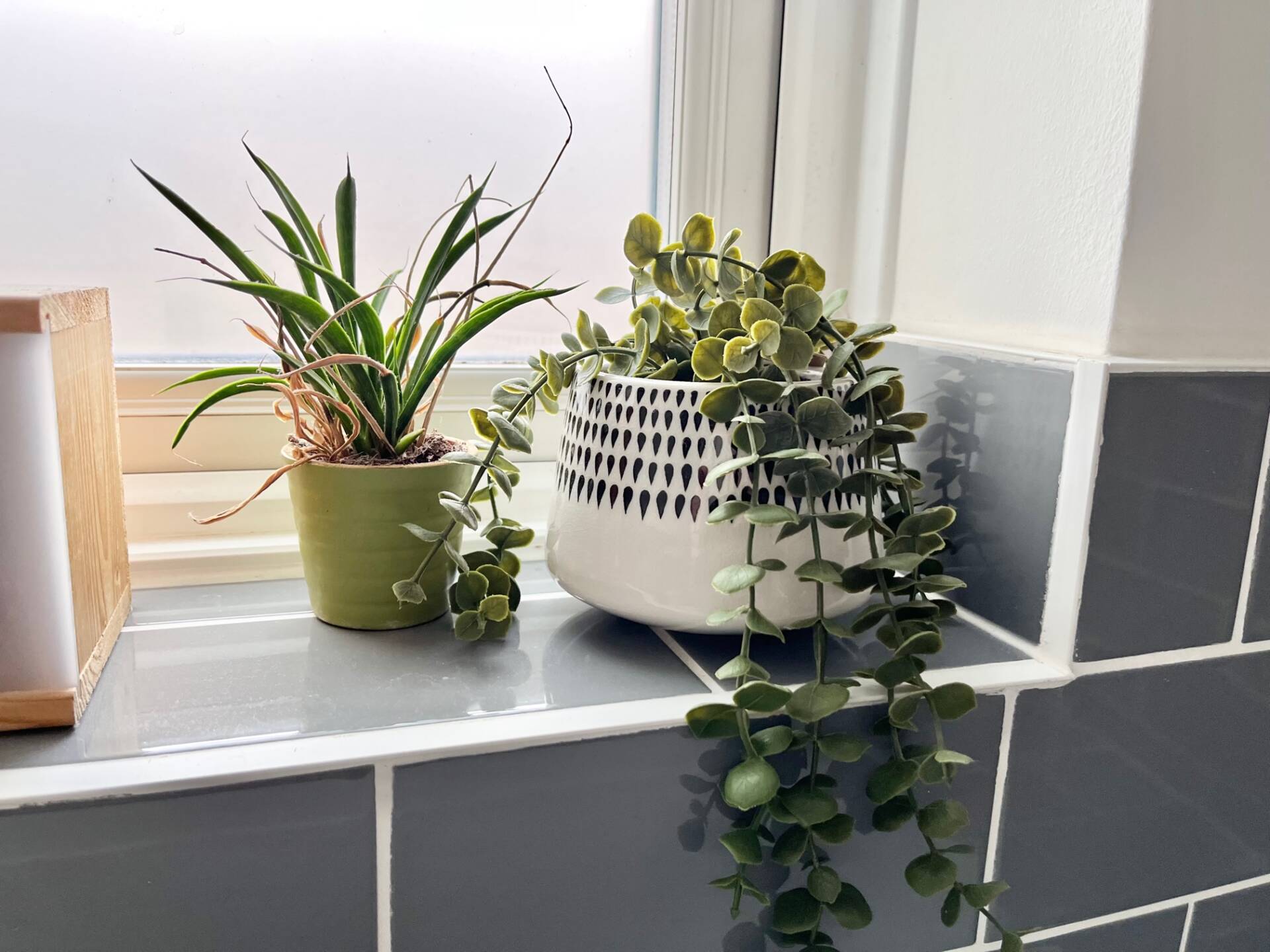 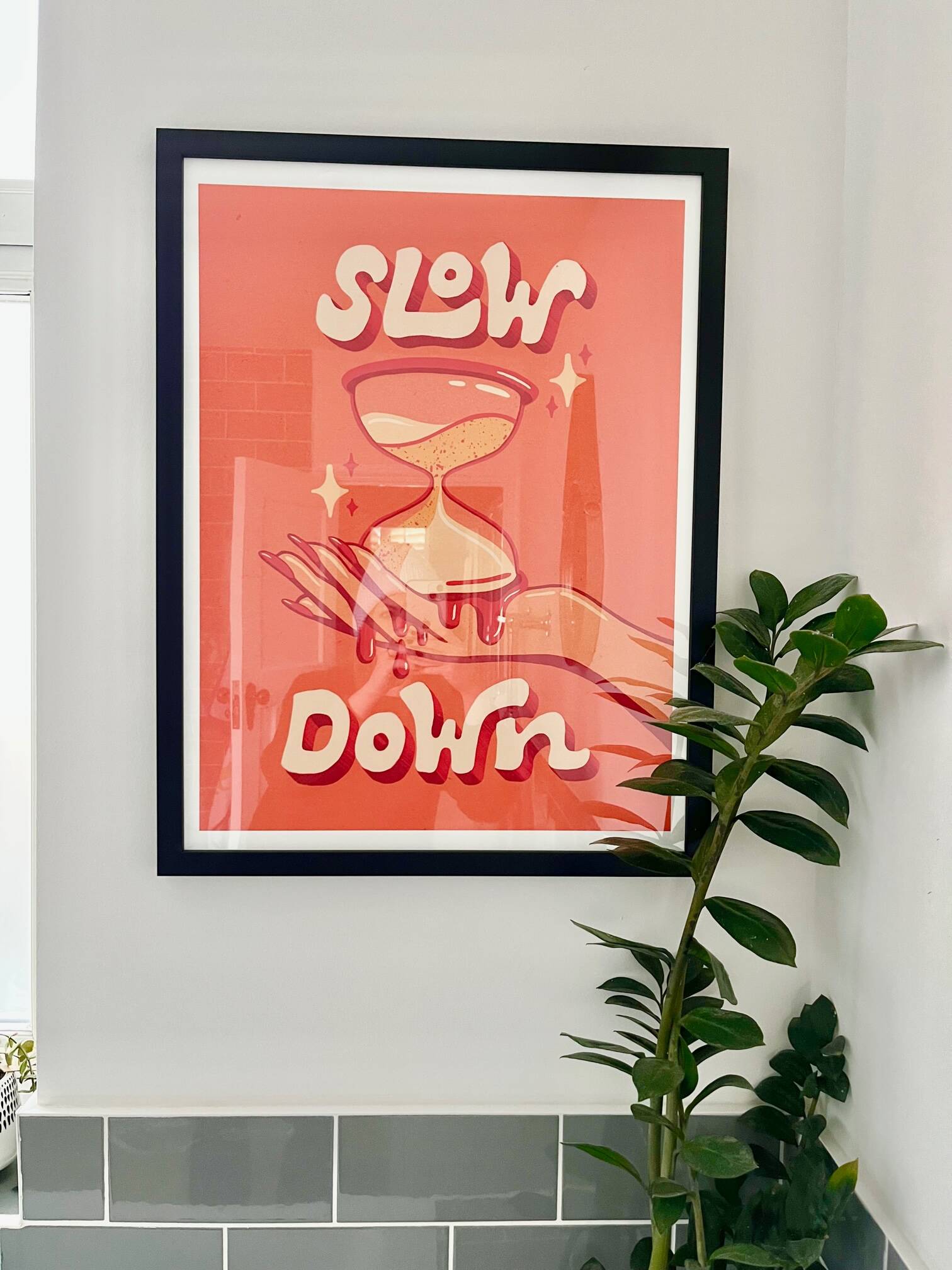 We’re so happy with the finished result of our grey bathroom, and it’s such a nice, bright space to spend time in now, either to get ready in the morning, or relax in the bath at night. We also saved money once again by sourcing everything ourselves.

If you have any questions about where anything is from, please do let me know – like I said, I’ve tried to name and link to everything below.

Like this grey bathroom renovation and found inspiration when it comes to grey bathroom ideas? See some more of of my home-related posts here!