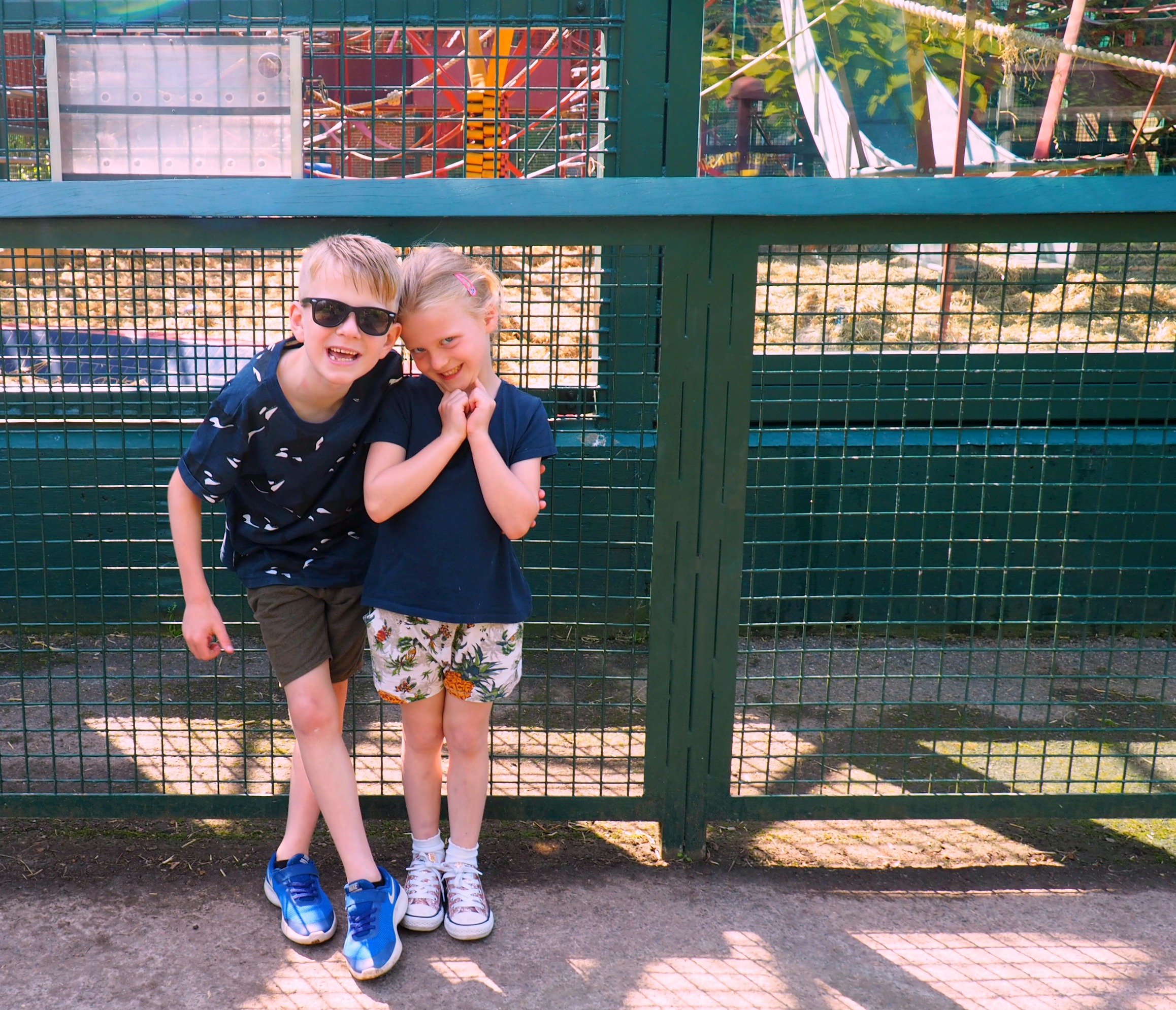 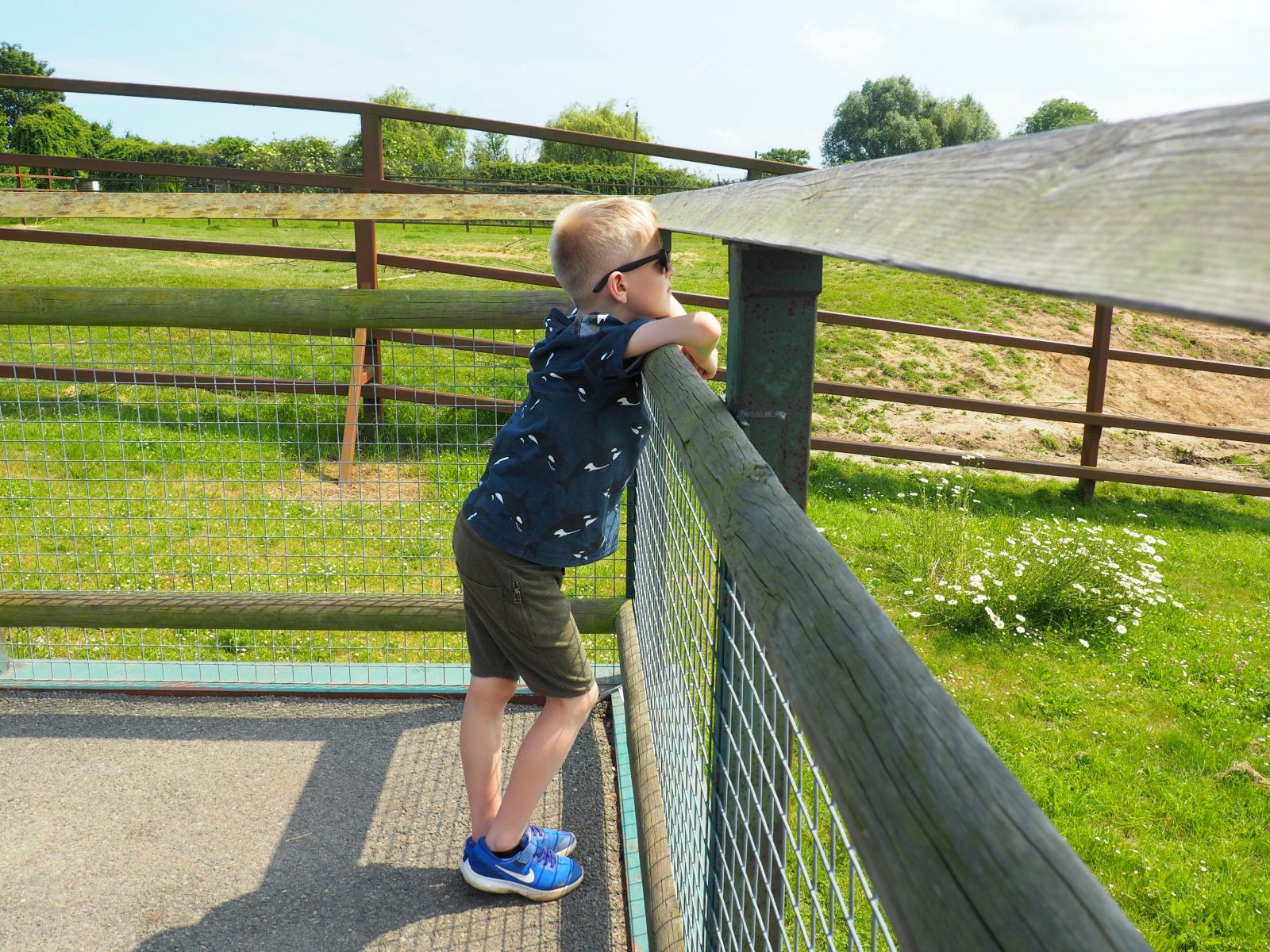 As South-East London dwellers, it’s not always easy to ‘get into nature’ so to speak, so when we were offered the chance of a day out at Howletts Wild Animal Park, near Canterbury, Kent, our family jumped at the chance.

“Let’s roam free with the animals!” I cried (well, kind of)

A mere hour down the M2 on a Sunday morning, and we were at Howletts, excited for the day ahead. As a parents of 3 young children, age 7,6 and 11 months, we are always looking for new days out that will please everyone, and I had high hopes that Howletts wouldn’t disappoint. I had heard of Howletts before through articles on founder John Aspinall, his son Damien, and the work of the Aspinall Foundation, but never actually visited. With the kids super-excited to see the animals, Adam and I were also interested in the set up of this Wildlife Park with a bit of a difference. 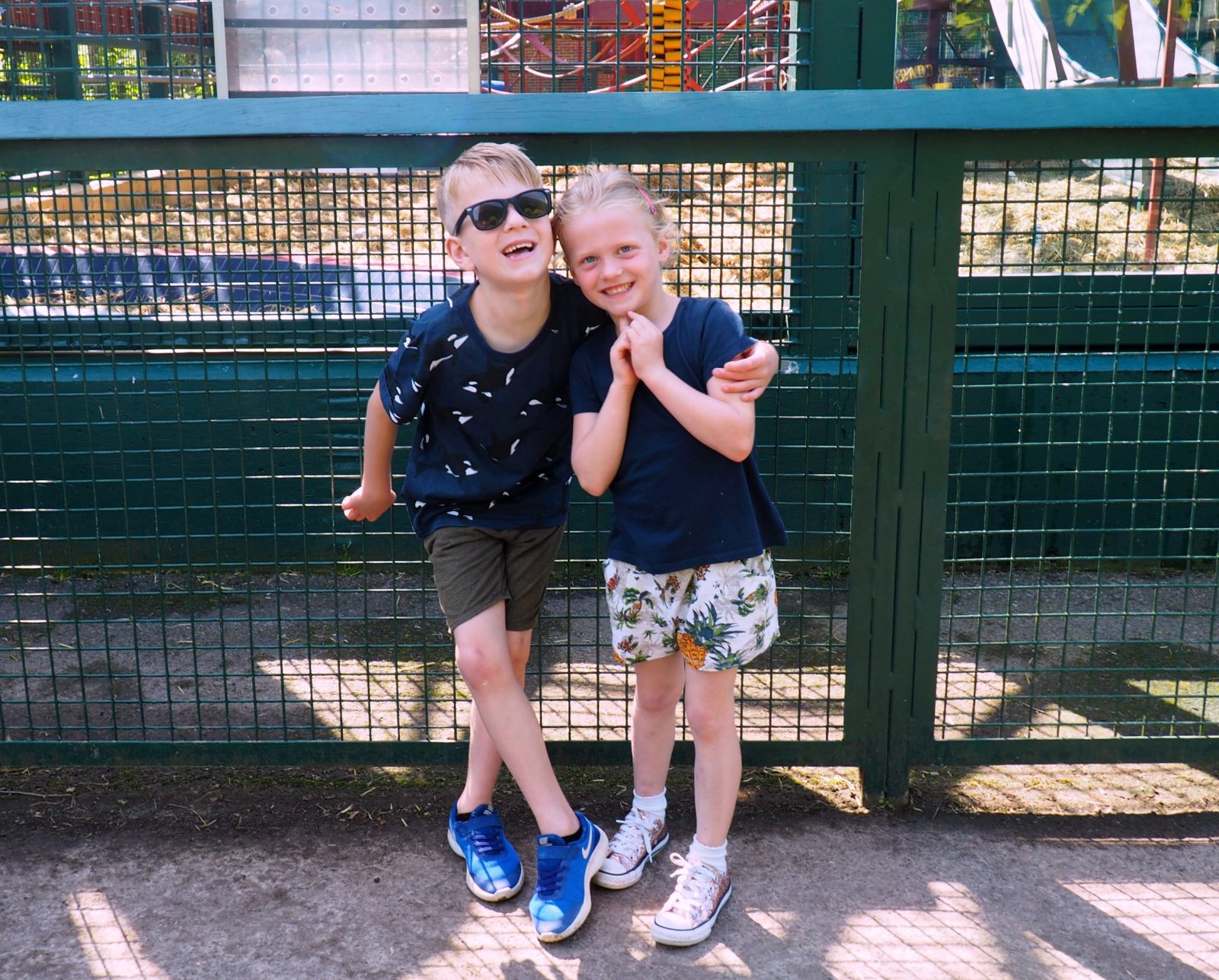 So what is Howletts?

Howletts was originally a private Wildlife Park founded by John Aspinall in 1957, and then opened to the public in 1975.  To increase space space for his wild animals and conservation projects he purchased the mansion there, plus huge grounds at sister park Port Lympne.

Howletts is renowned for breeding rare and endangered species and encouraging close relationships between humans and animals. Indeed one of the most enjoyable aspects of our trip from a grown up perspective here was finding out more about rare species and knowing that many of the animals bred in captivity here are subsequently released into the wild. What looked like ‘just a tiger’ or a monkey was actually likely to be a species that we’d never heard of before which made interesting viewing (although more on that later).

We arrived for opening and whizzed straight in, and what immediately struck me was how clean and spacious the entire park was. Throughout the day it never felt ridiculously overcrowded (although definitely busy enough for atmosphere), which meant that we could view animals without a bunfight, and never once had to queue for one of the many toilets spaced around the park. 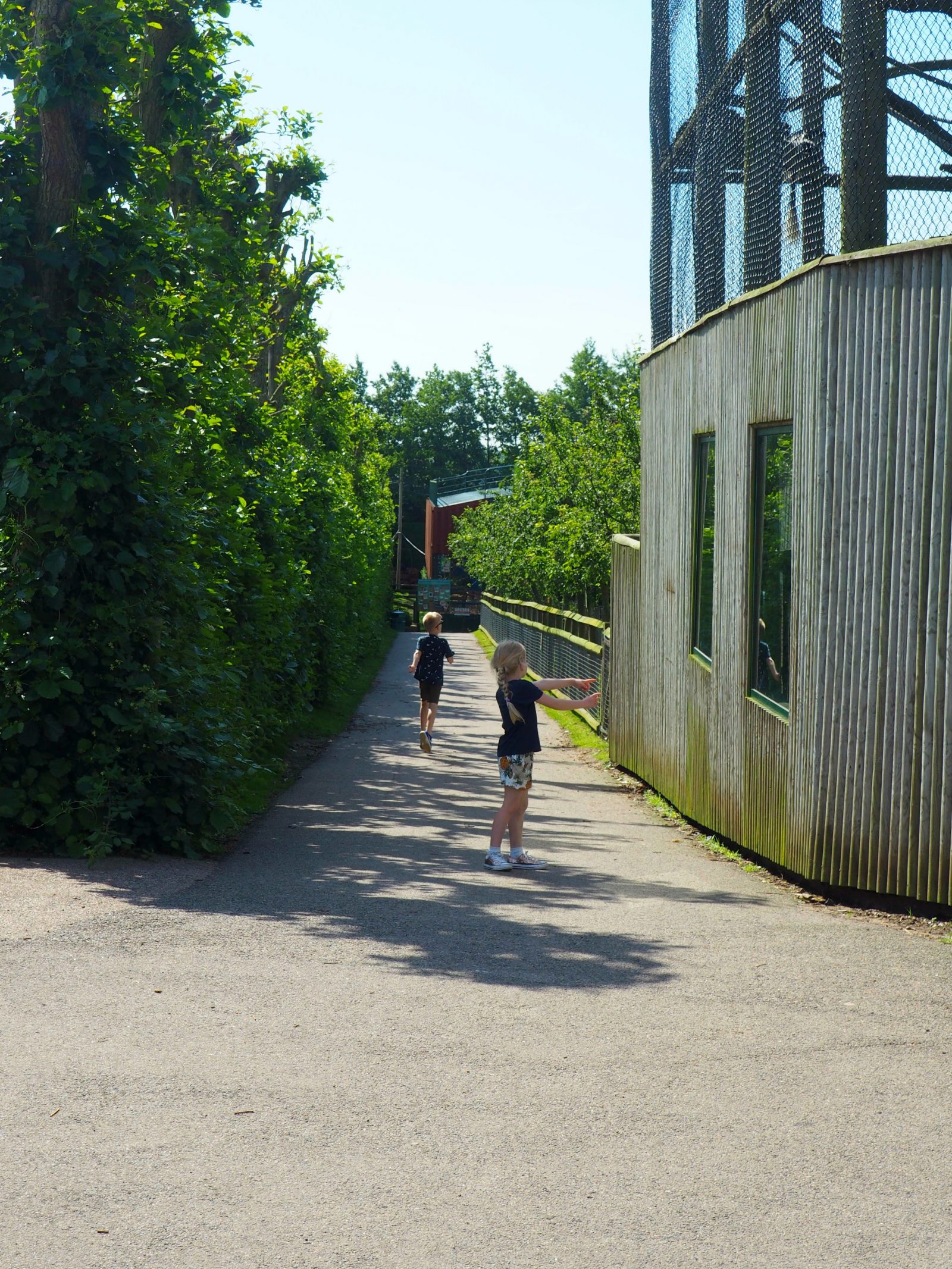 The maps given out on arrival were easy to read, and our bigger children enjoyed navigating. I’m no animal expert so can’t put my finger on what was different, but there was something SO relaxing about Howletts and viewing the animals – whether it was the size of the enclosures and how they are tailored to each animal, or the fact that whole place is spacious and aesthetically pleasing, it just felt good. My husband said that he thought there were more opportunities to walk around the enclosures and see the animals from different vantages compared to certain other zoos, and he could well be right. Viewing was ideal for young children, with large, low down viewing windows so they could easily see. We were lucky that the animals were on form the day we visited, despite it being a hot day, so we got to see plenty close up. 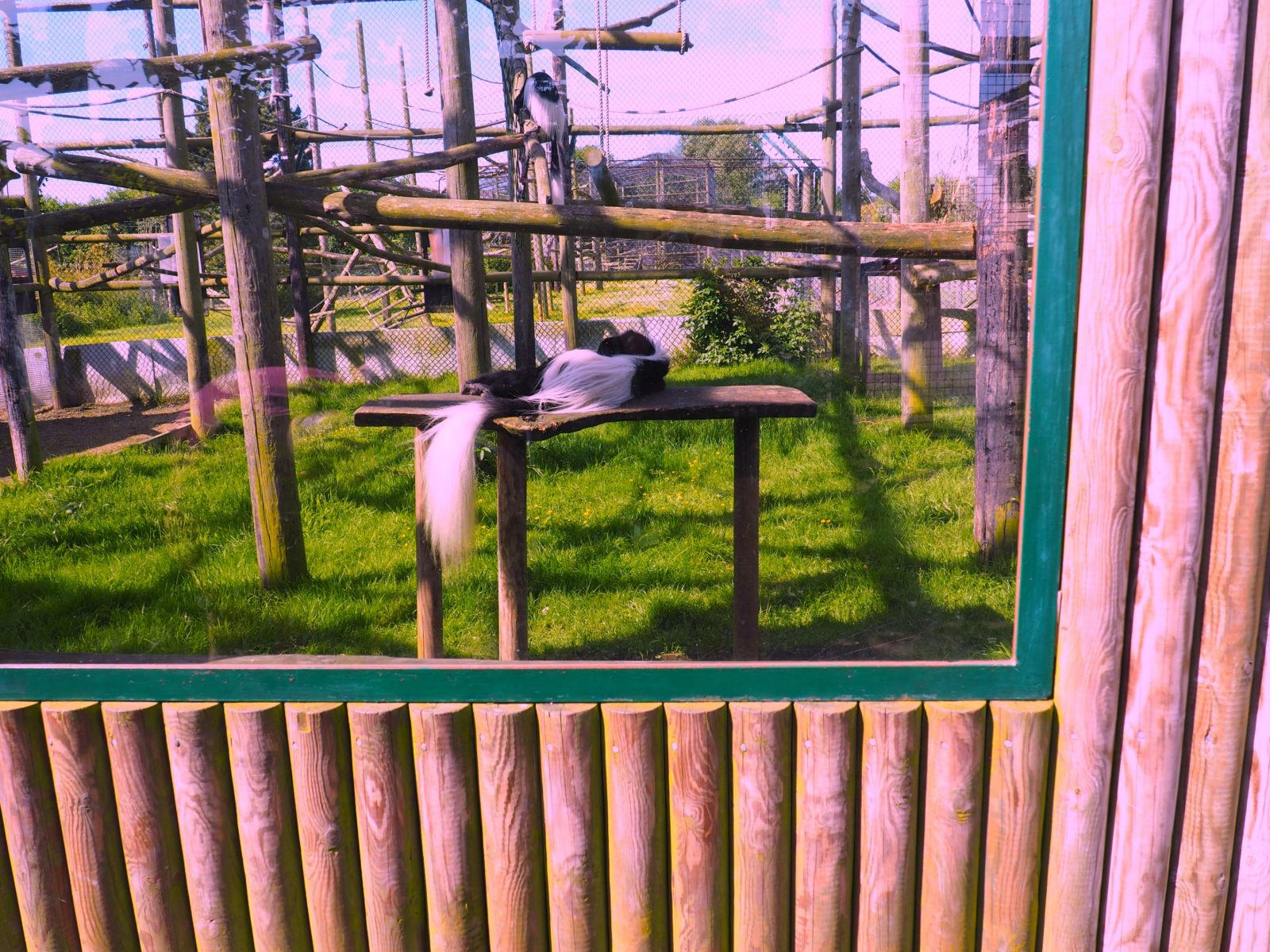 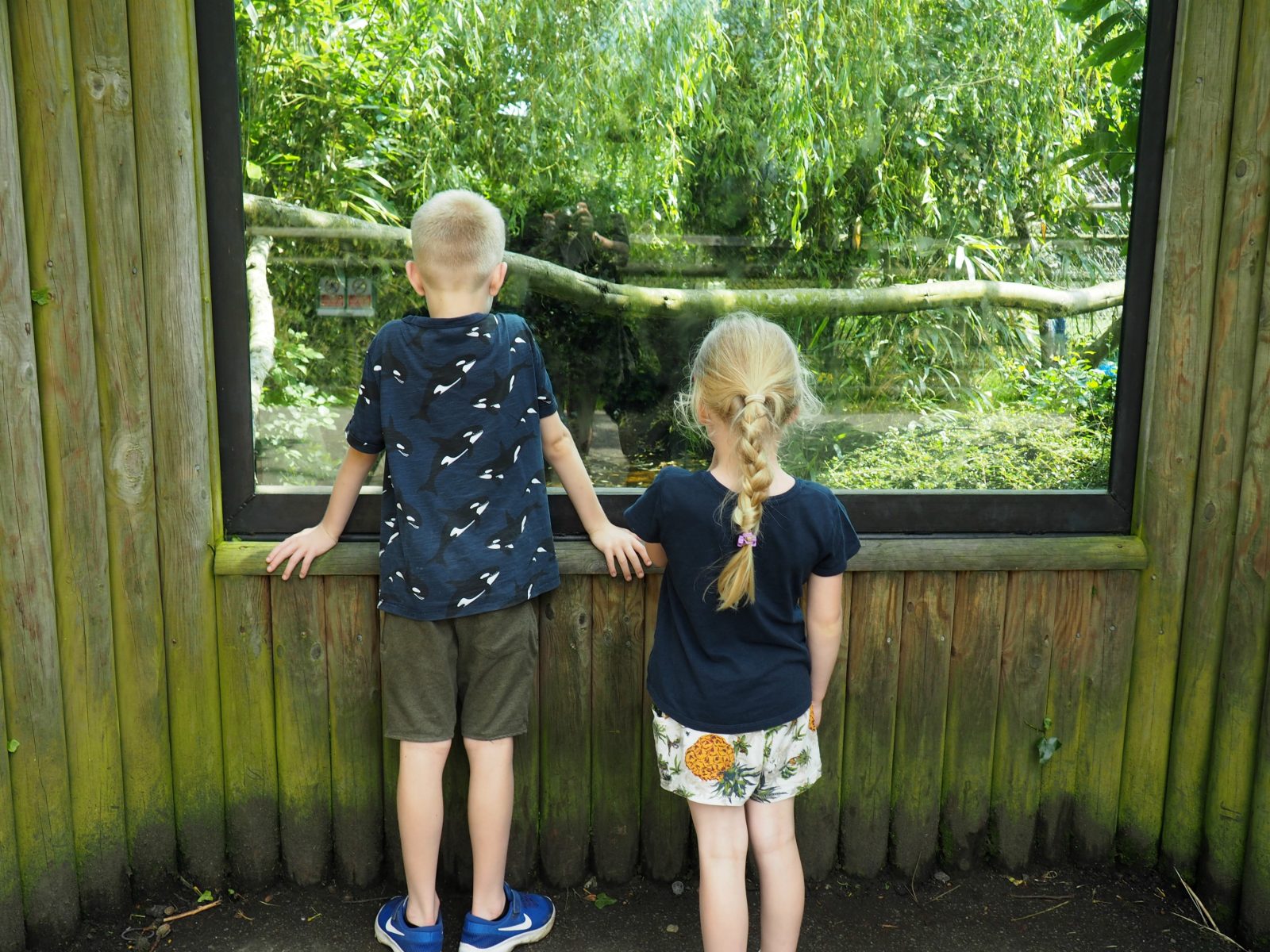 Lots, wonderfully! Aside from the novelty factor of seeing all these interesting species, there were a few animals that we got to get really up-close-and personal with, or at least, it really did feel that way.

We all LOVED the Walking with Lemurs experience, and visited this bit twice throughout the day. Here, you are literally walking around whilst the lemurs run free within their enclosure, and the keeper who we encountered was very knowledgeable and chatty. Both Freddie and Sasha really enjoyed this and weren’t nervous at all at being so close to the lemurs, and we discovered more species than I knew existed. 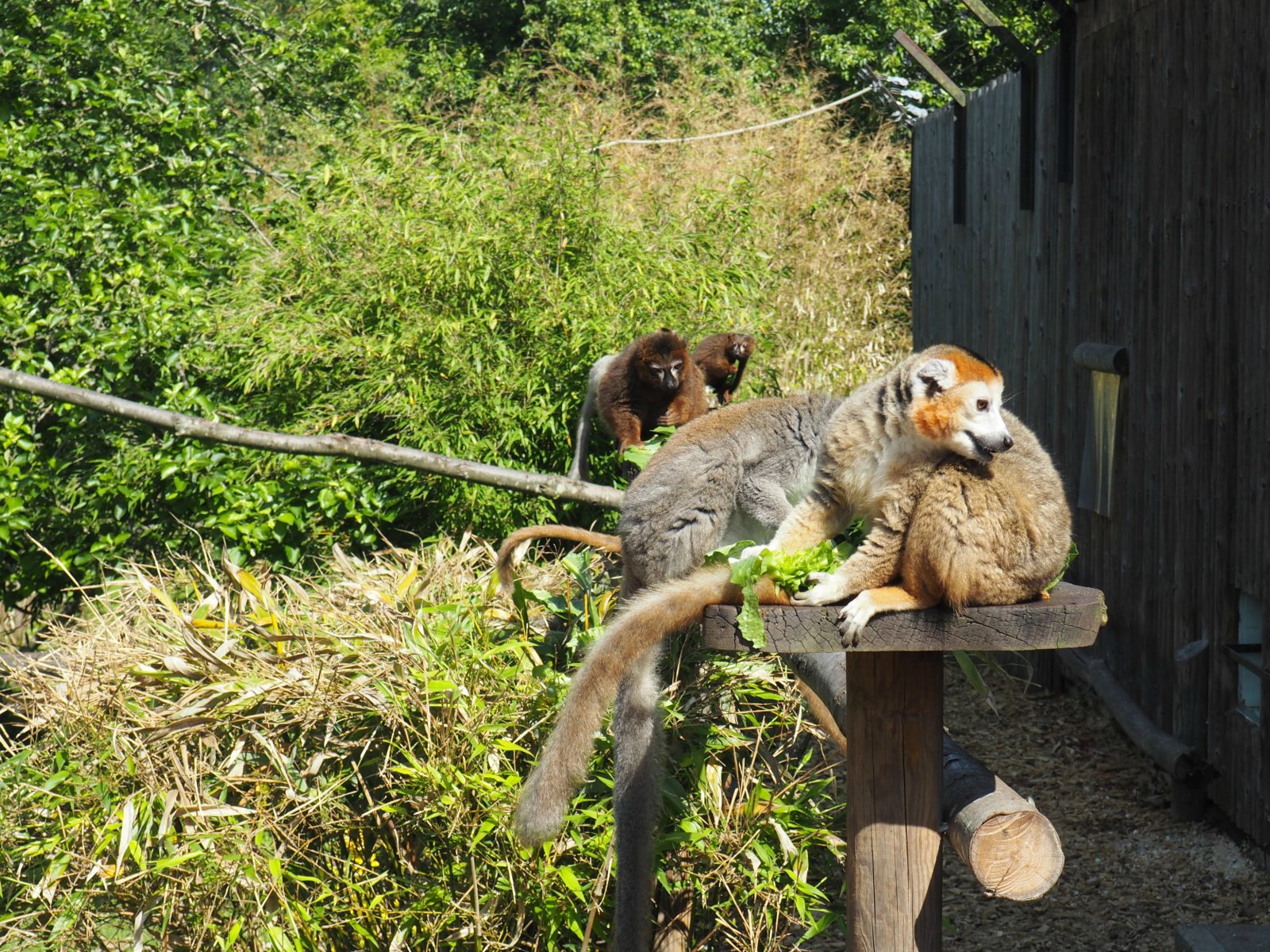 Even Arlo was chuckling at the sight of them which was pretty magical. It was his first time at a Wildlife Park, so we weren’t sure how much he’d get out of it, but he really did watch the different animals and was particularly taken with these lemurs and also the different monkeys around the park. You can see from the look on his face that he was so engrossed! A really magical memory for us, and a testimony to the great viewing opportunities at the park. Just look at that little face! 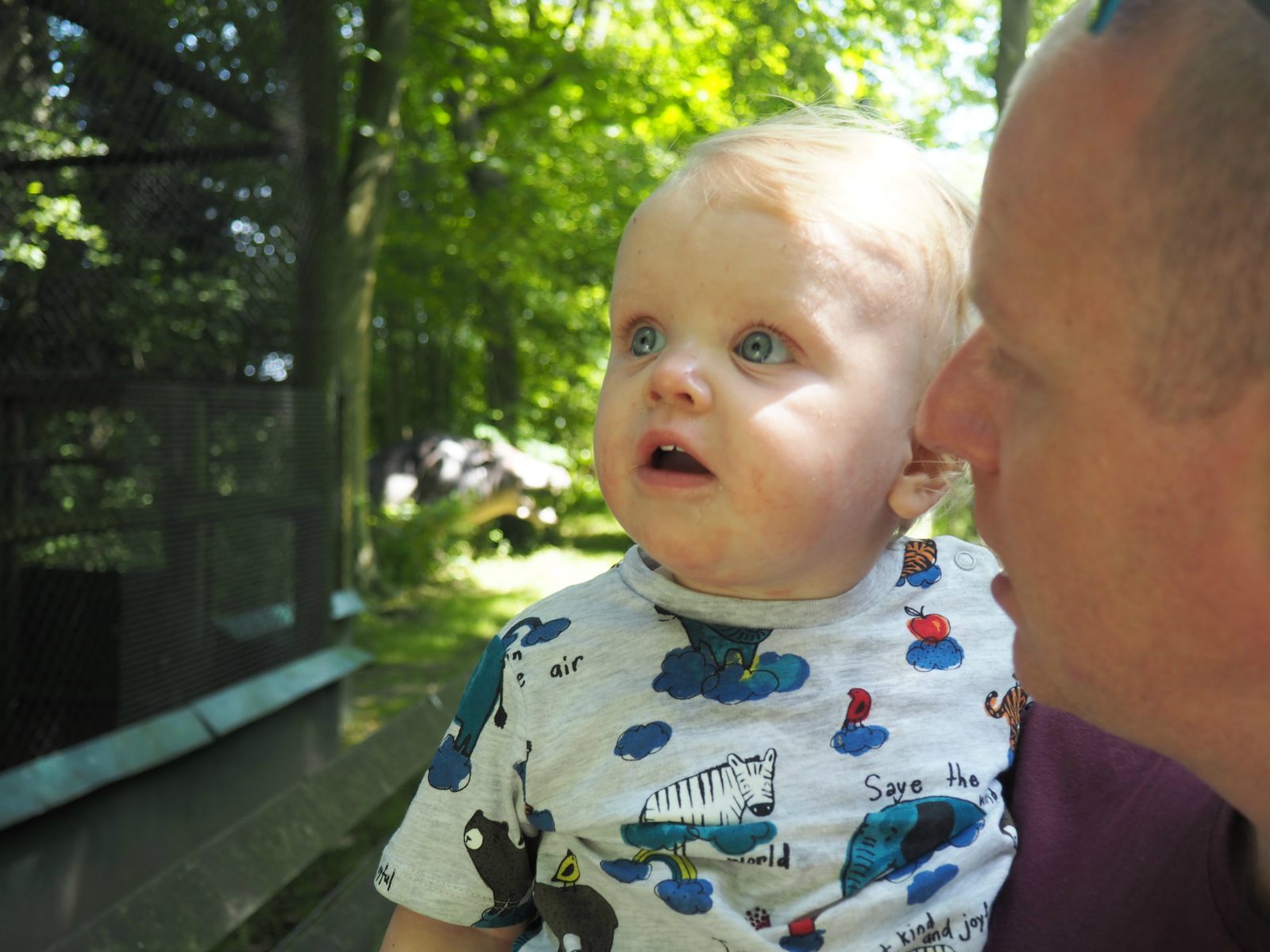 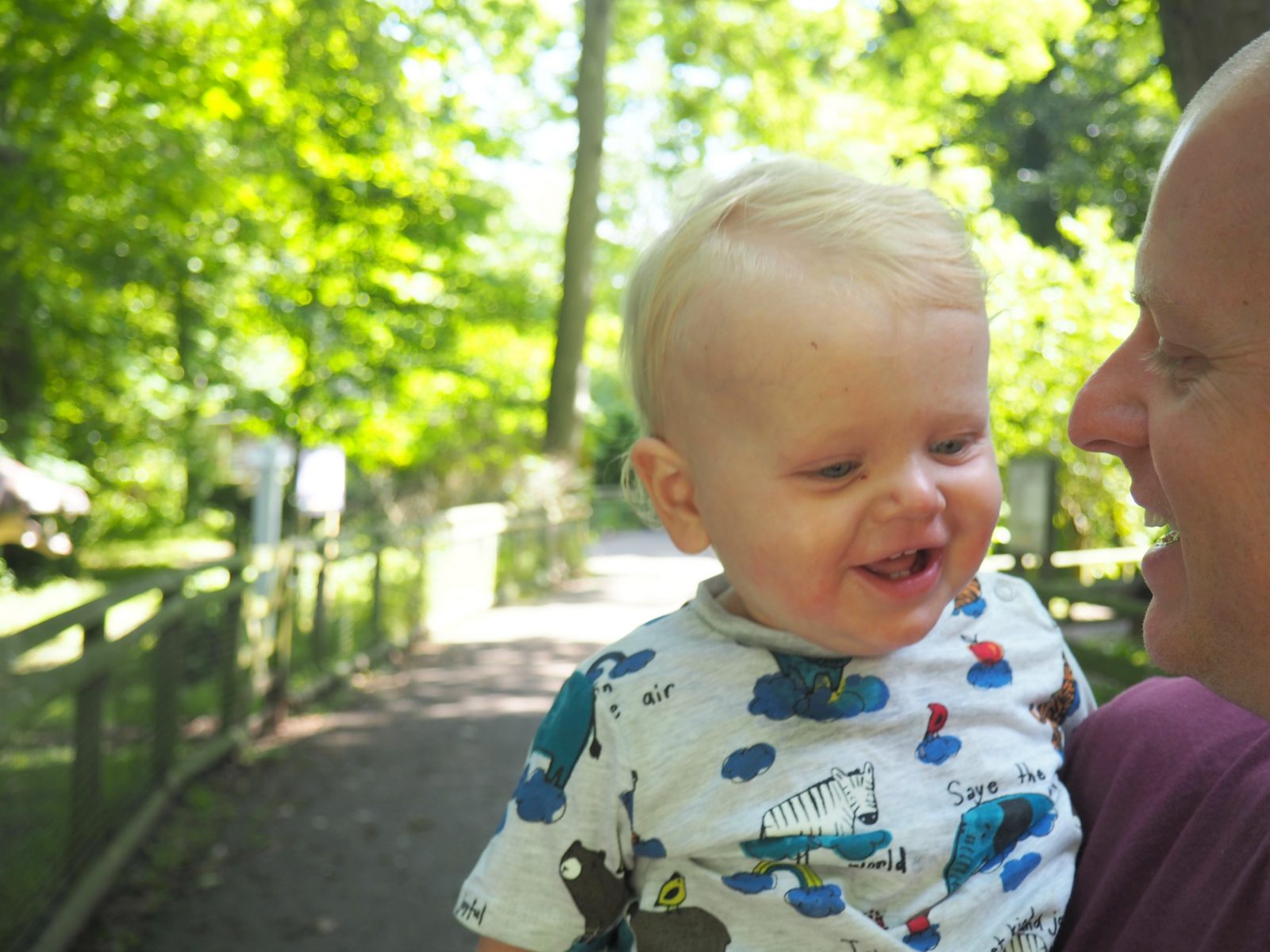 Gorillas are a BIG Howletts ‘thing’ and animals that the family clearly have an affinity for. We actually saw Damien Aspinall and other family members feeding one lot of gorillas just after lunch, and it was pretty cool to see the family get stuck in and involved- there clearly is a lot of love for their home and the wildlife within it. Going off on a tangent, we saw another Aspinall family member in the cheetah enclosure and playing a hunting game with them later on in the day, which made my eyes nearly pop out of my head! Anyway, back to the gorillas- there are two main gorilla areas in the park, with huge enclosures housing a community of gorillas each (is that a thing? A community?!) each with plenty of activities and experiences for them. 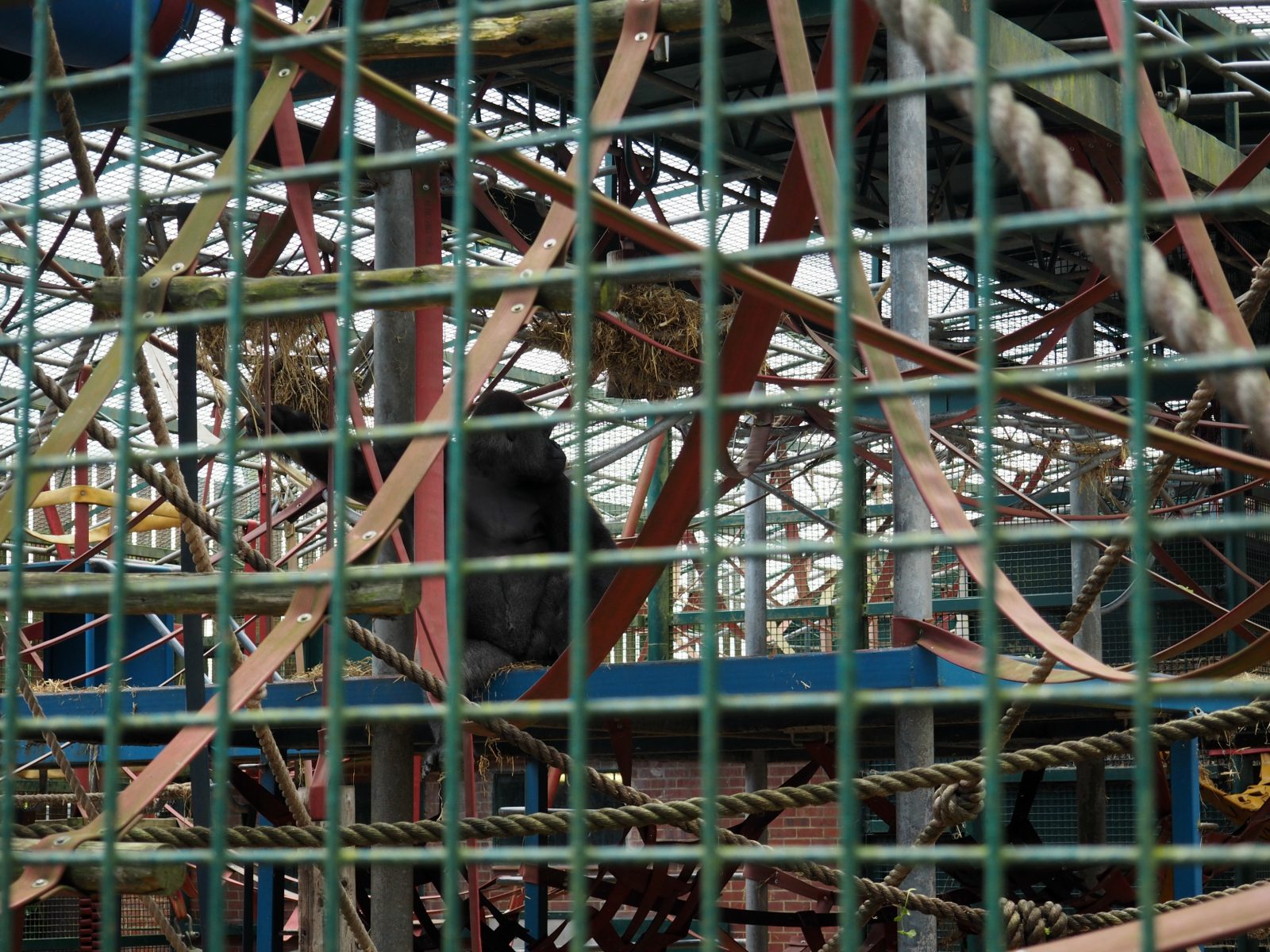 With signs asking us to be quiet so as not to distress them (actually a lovely first for any Wildlife Park that I’ve ever visited), there were fantastic seated viewing platforms where you could sit for as long as you wanted to watch them. We all found this ridiculously relaxing (especially as Arlo had chosen to have a nap at this time #ideal). I had never been so close to gorillas before despite seeing them in other places, so if gorillas are something you really want to see then Howletts is by far the best place in my opinion. 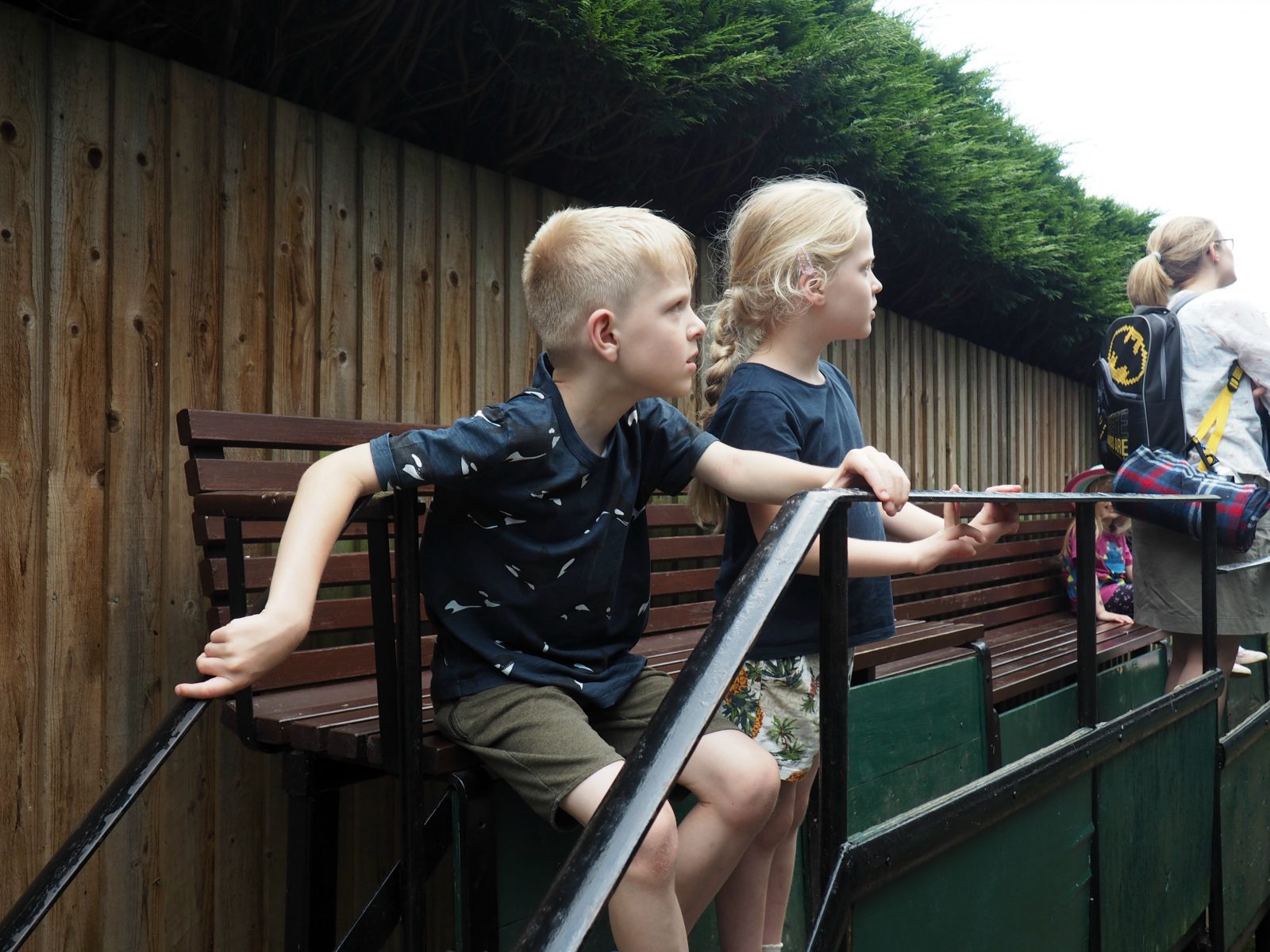 Sasha’s eyes lit up when she saw the ‘Animals of the Ice Age’ (we’ve clearly watched the Ice Age films too many times), and this was an interesting (if slightly random) addition to the park, and very educational. The older two liked to run ahead on the trail and spot the different Ice Age animals, whilst Arlo enjoyed the walk within the shady trees. Howletts is great for young children on a hot day, as there is lots of shade whilst walking between animal enclosures, as well as plenty of shady spots to sit. 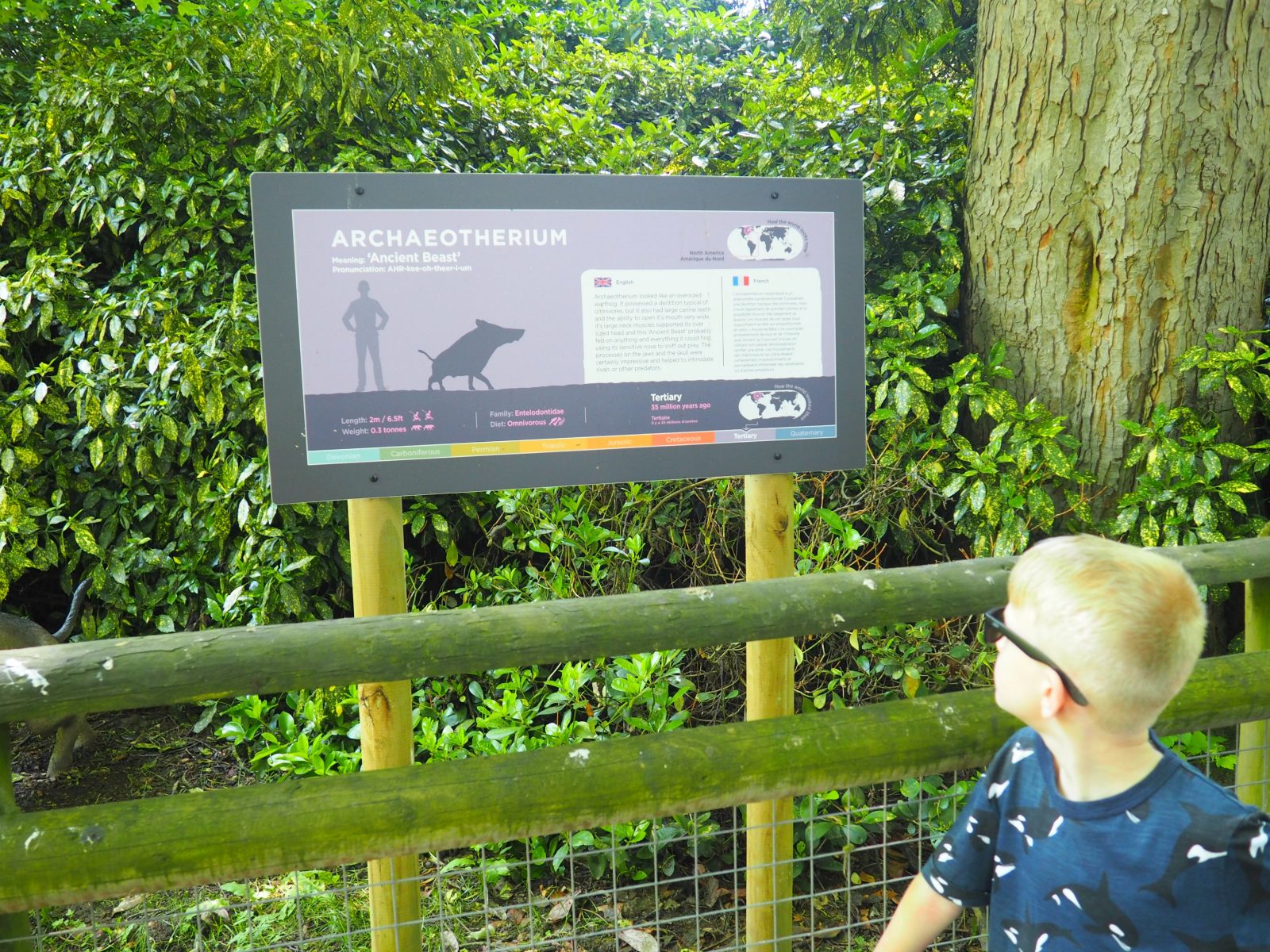 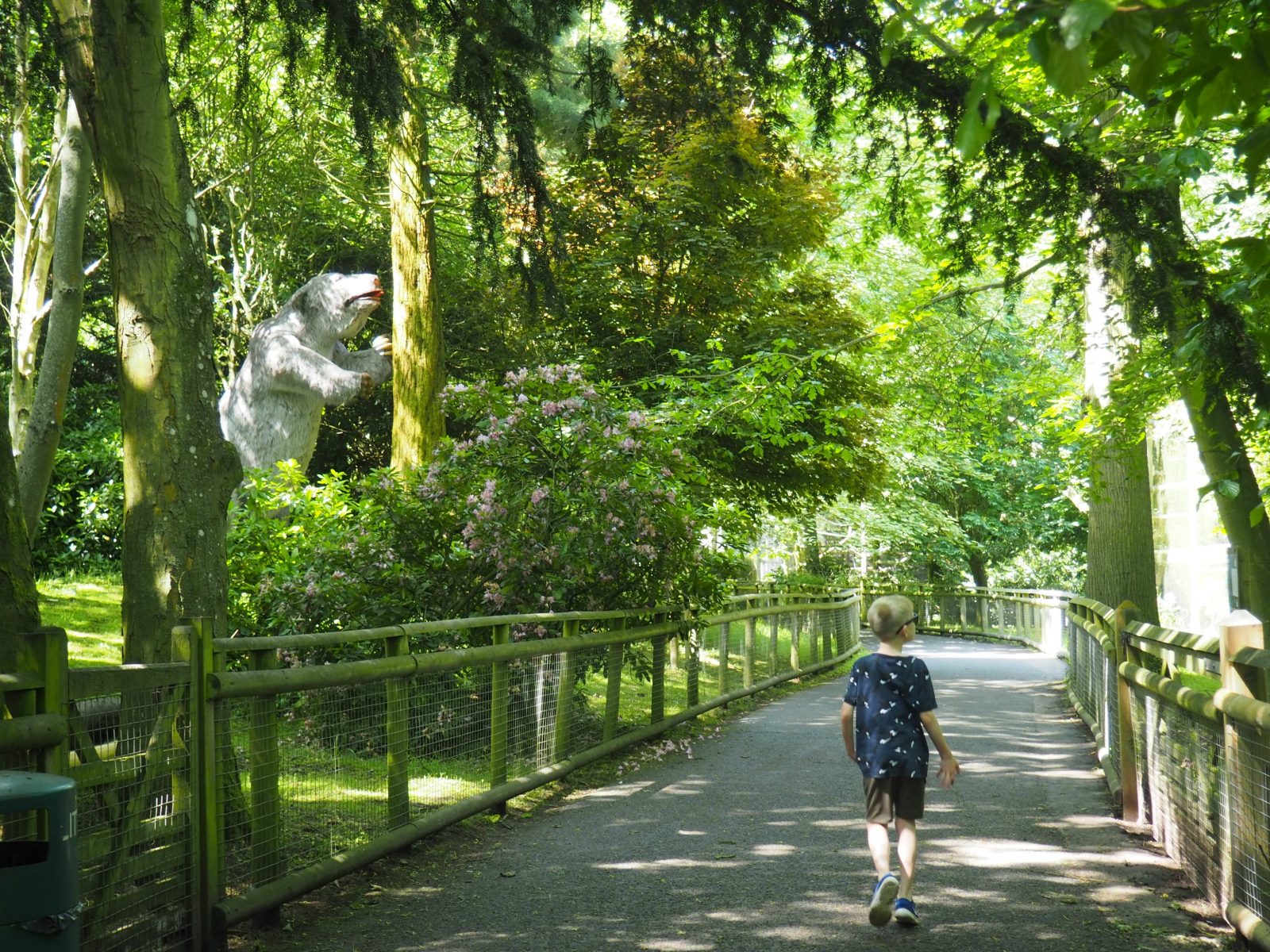 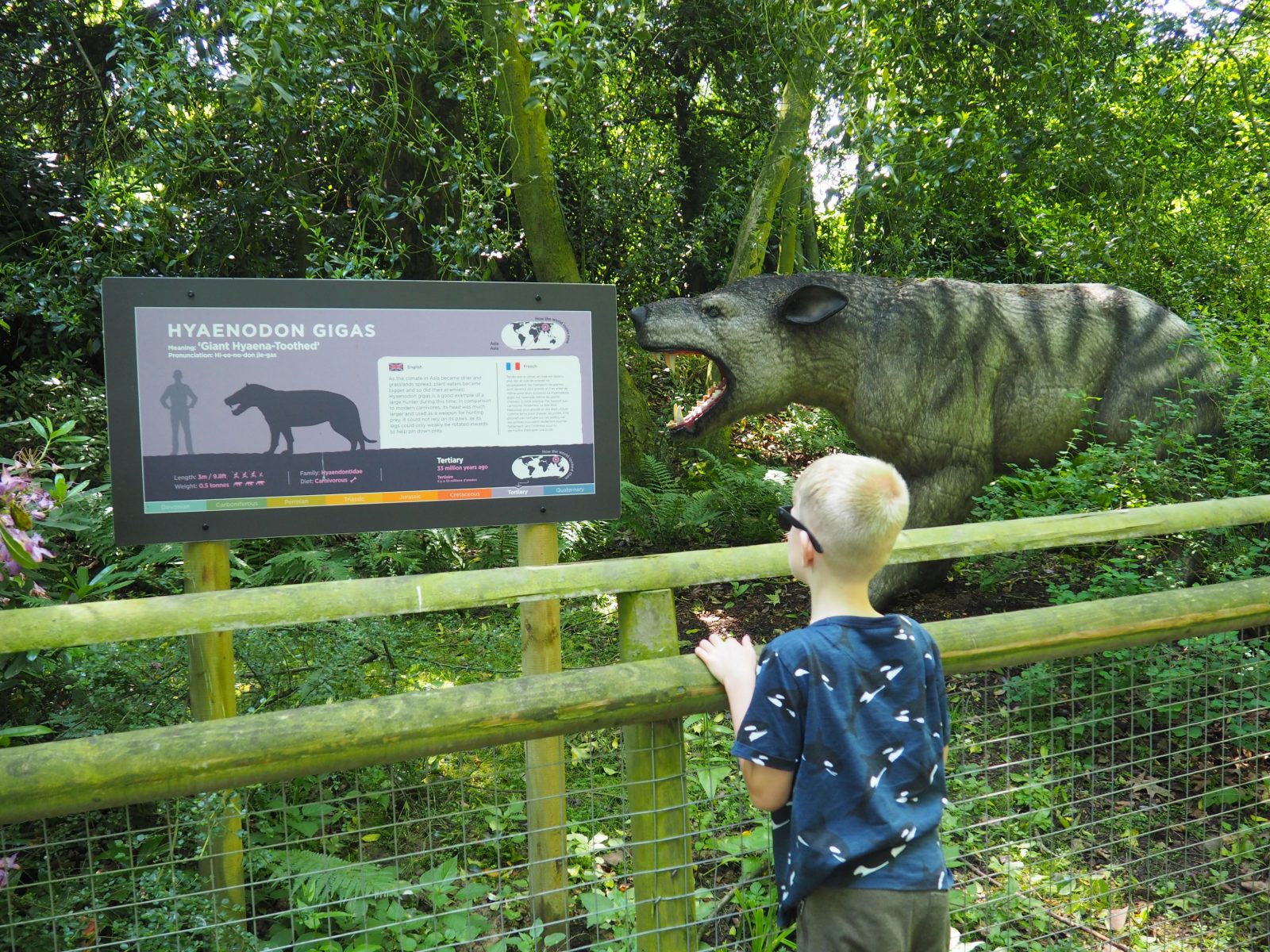 As well as using the plenty of clean toilets and baby change facilities, we had lunch at The Pavillion Restaurant. I wasn’t expecting much from the food to be honest, as often these types of places tend to focus on fast food, but we actually had a really great cooked meal. I opted for the pork roast which was really decent, Adam went for a pasta bake, chips and salad of whopping proportions (you won’t need dinner after eating here!), and the big two opted for sausages, chips and beans. Arlo had a mini cheese sandwich but there weren’t many baby/young toddler friendly options (probably my only criticism of the place), so if you have a child under two I would probably bring their own food even if you eat yourselves. We also had a cake and coffee mid-morning from one of the smaller cafes dotted around the park, which were both nice and reasonably priced. 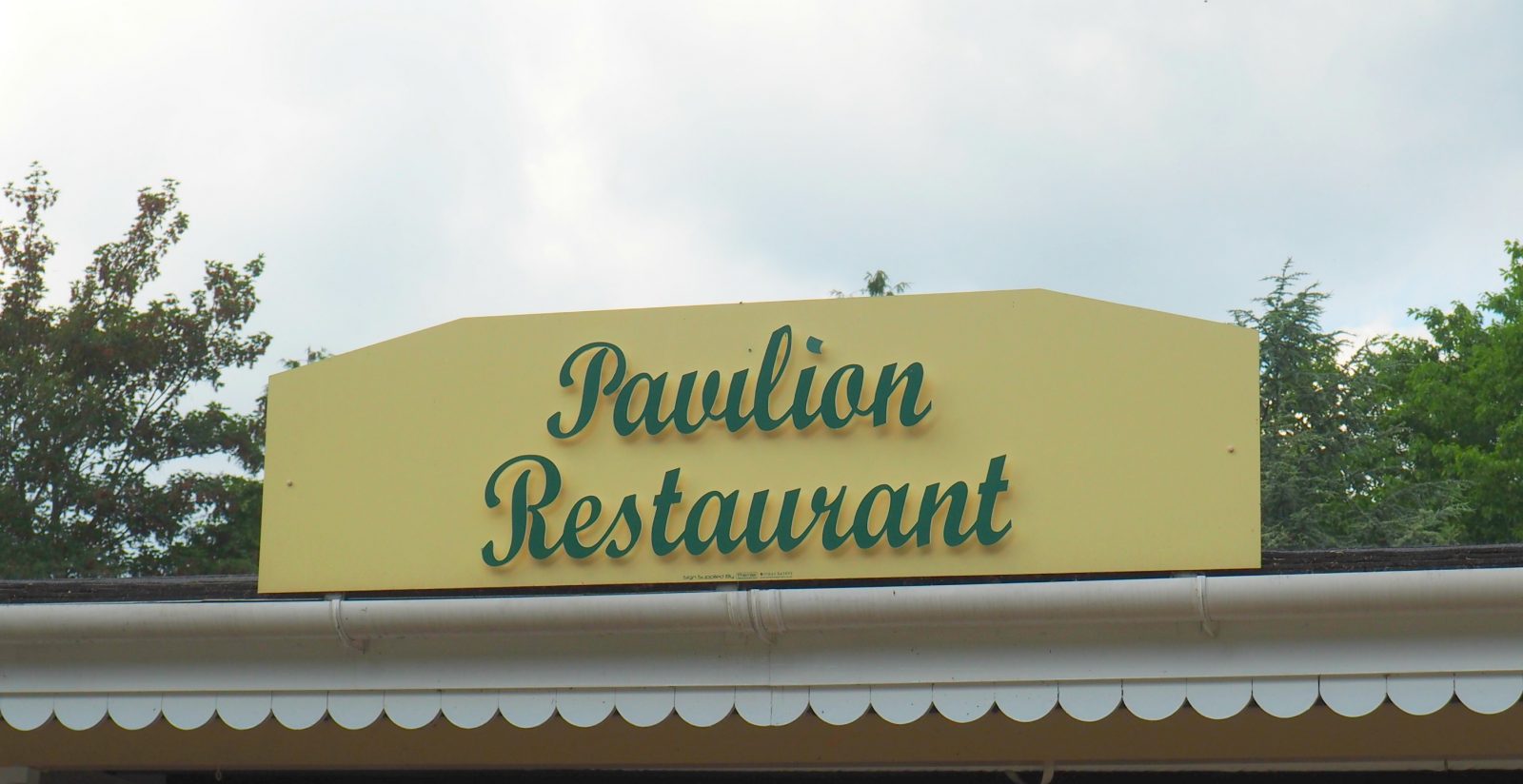 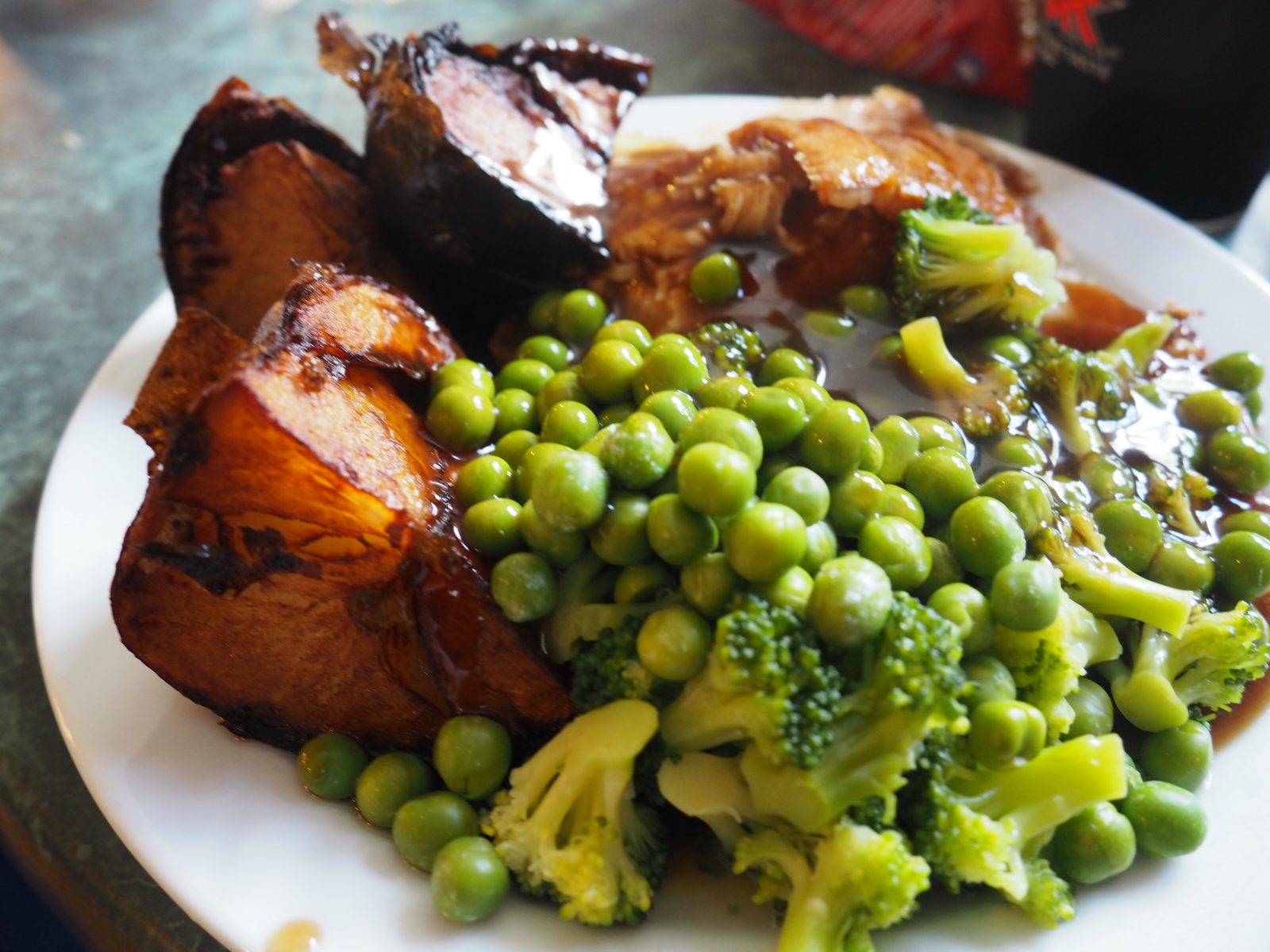 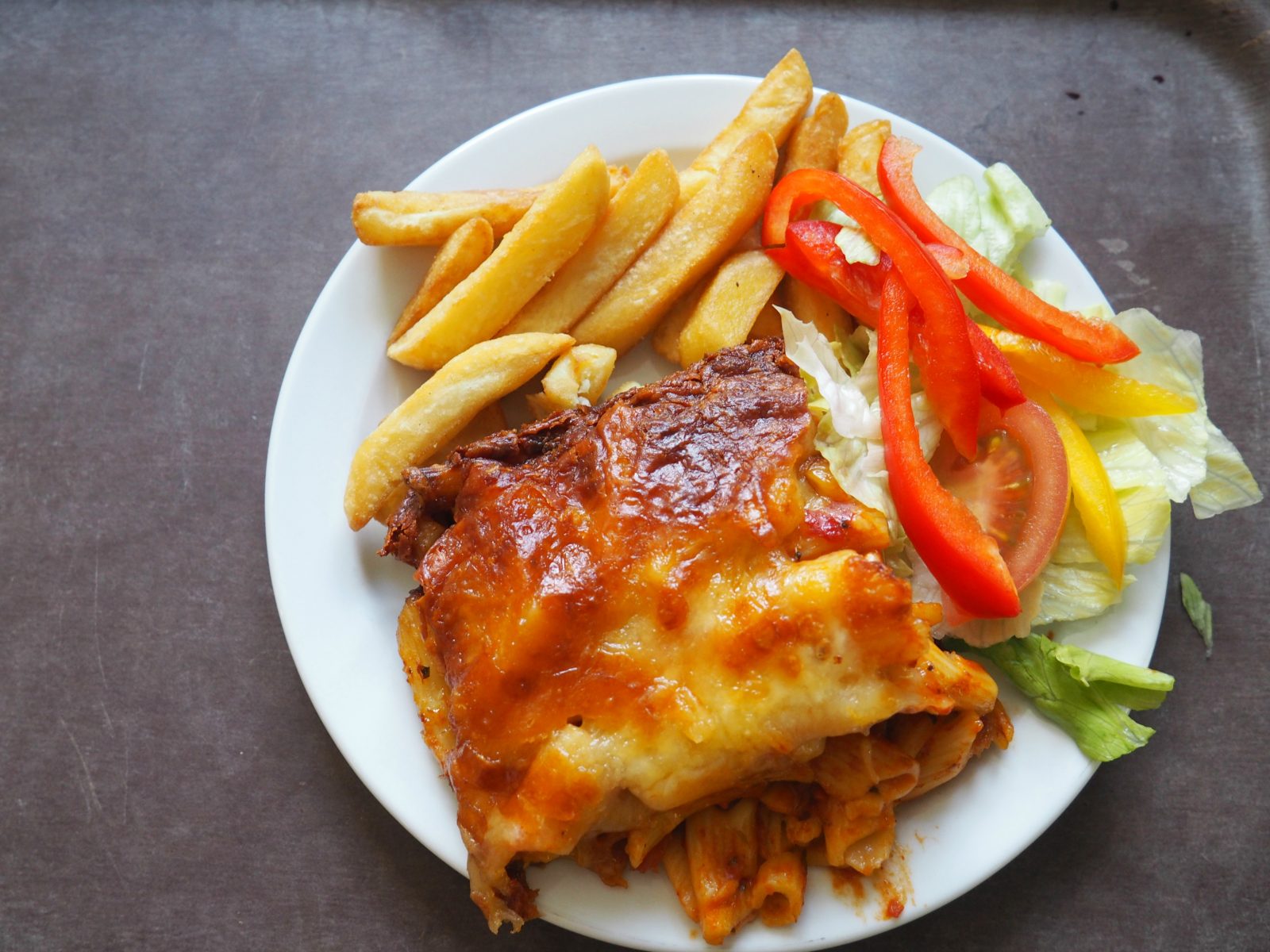 Right by the Pavillion Restaurant and outdoor seating area (great for bringing a picnic possibly?) was a small adventure playground, perfect for kids our age who like to burn off some steam! 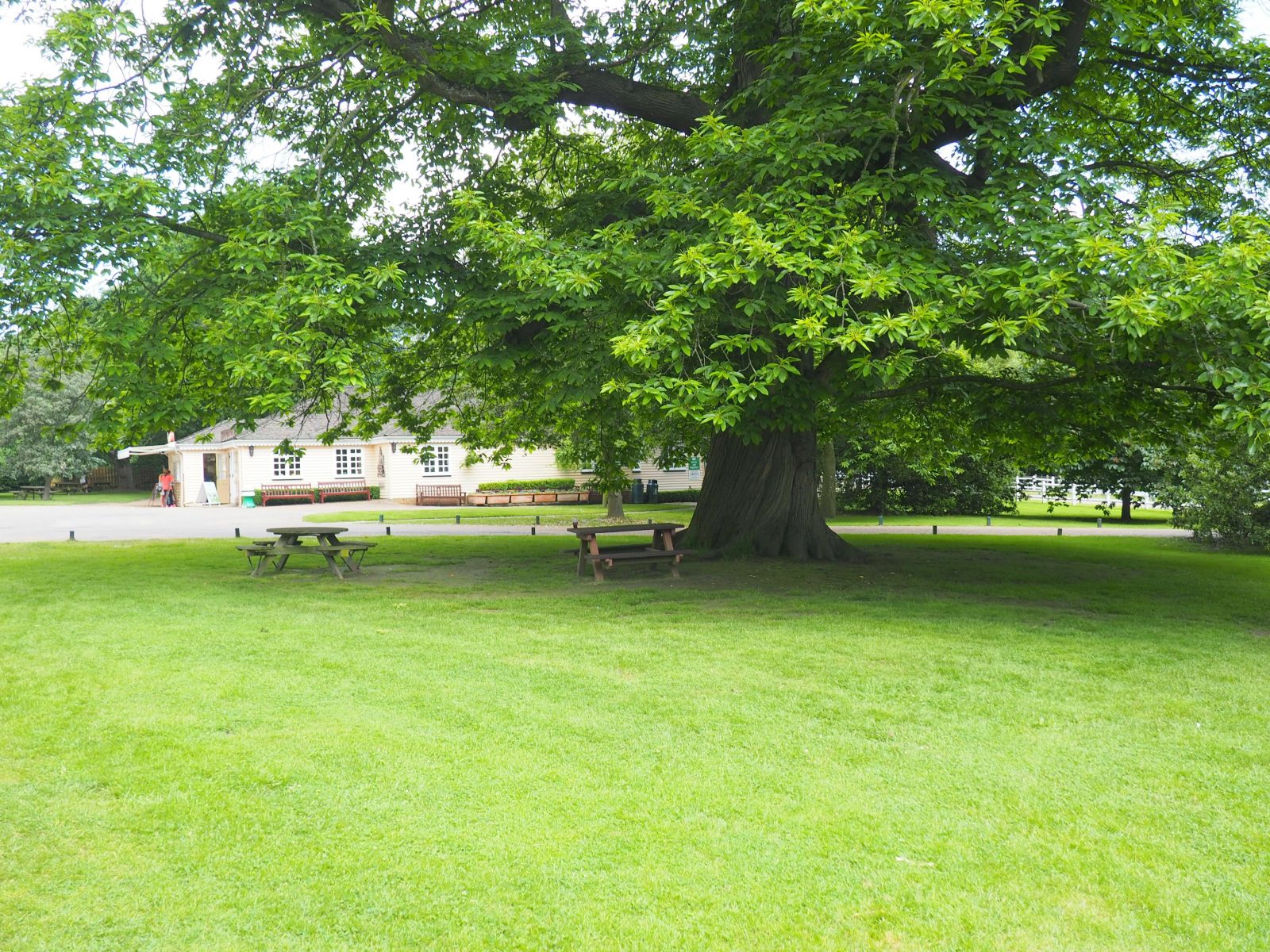 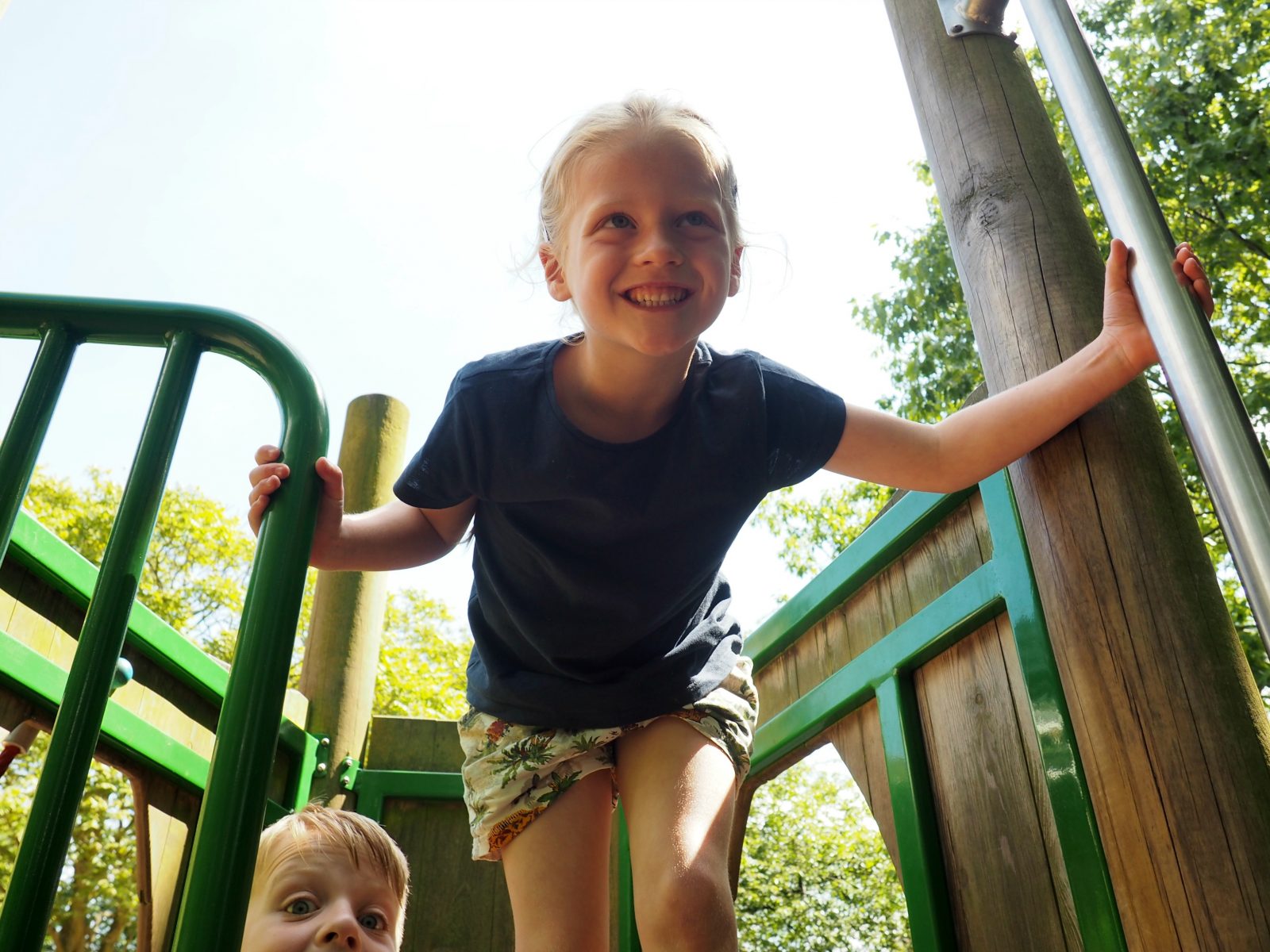 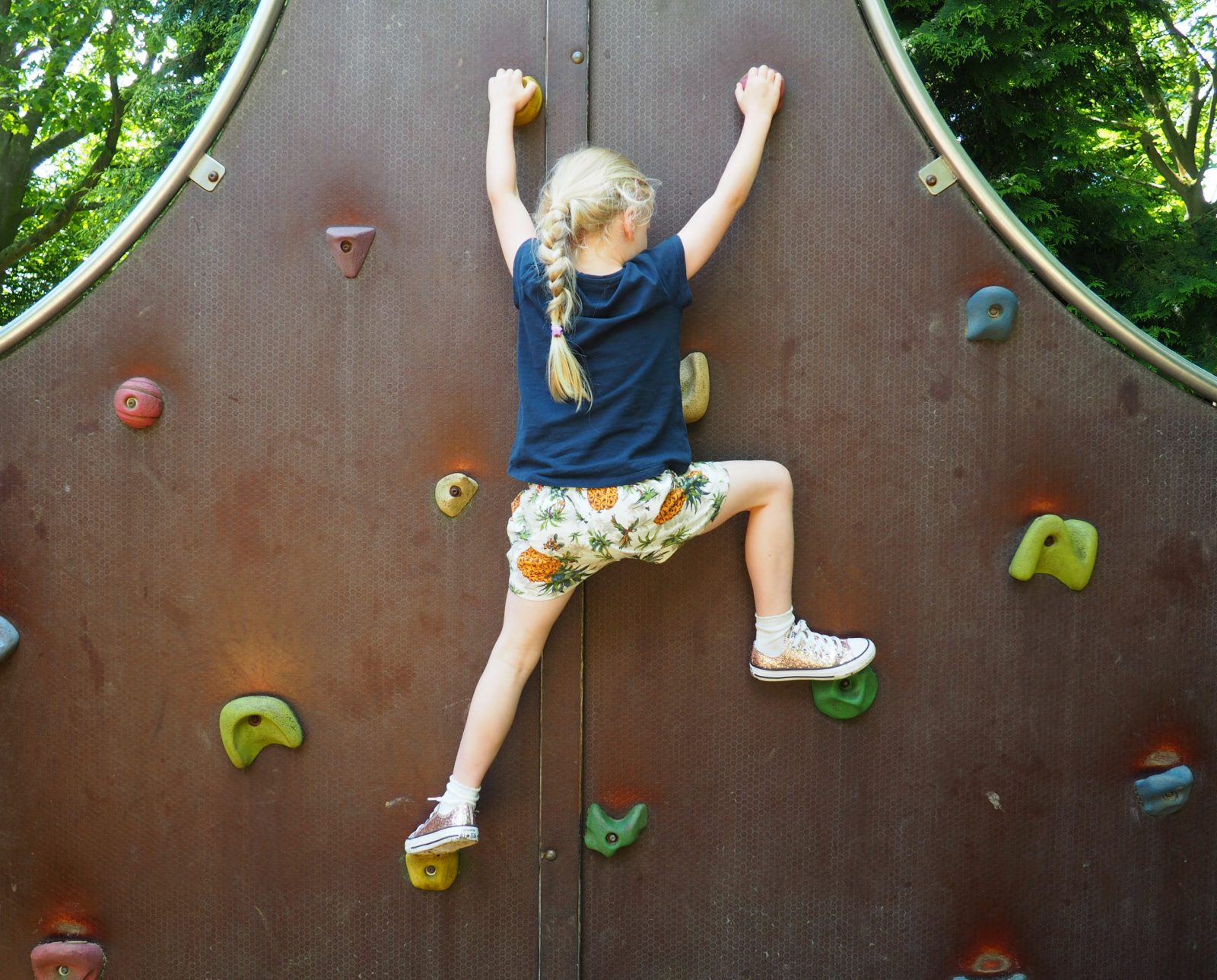 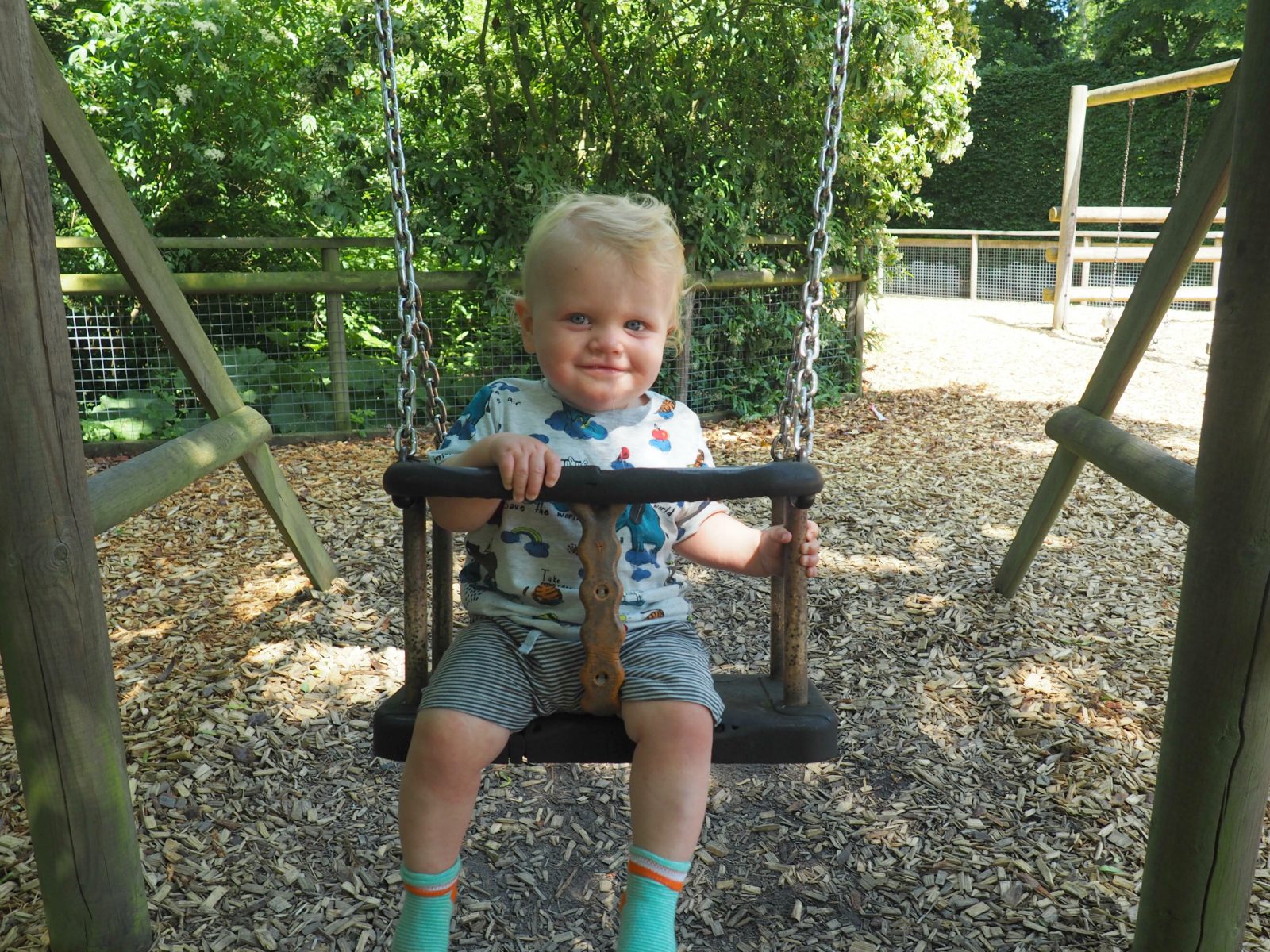 Adam and I left Howletts both enthusing that this had been one of the best family days out we’d had in a long while. Our whole day had been stress-free (it helped that all 3 kids had been on good form), we saw loads of animals and came away feeling more educated, were fed well and every single staff member that we came across was friendly, helpful and knew their stuff. Sasha dropped her ice cream just after receiving it later in the day, bursting into tears, and the lady serving her was so kind and gave her not one, but two scoops of ice cream to make up for it. Little touches like that go a long way to making a day great, as opposed to okay. I loved how involved the Aspinall family clearly are with the animals, and having read up more about the Aspinall Foundation since our trip they clearly do so much good work when it comes to animal conservation and fulfilling John Aspinall’s legacy. 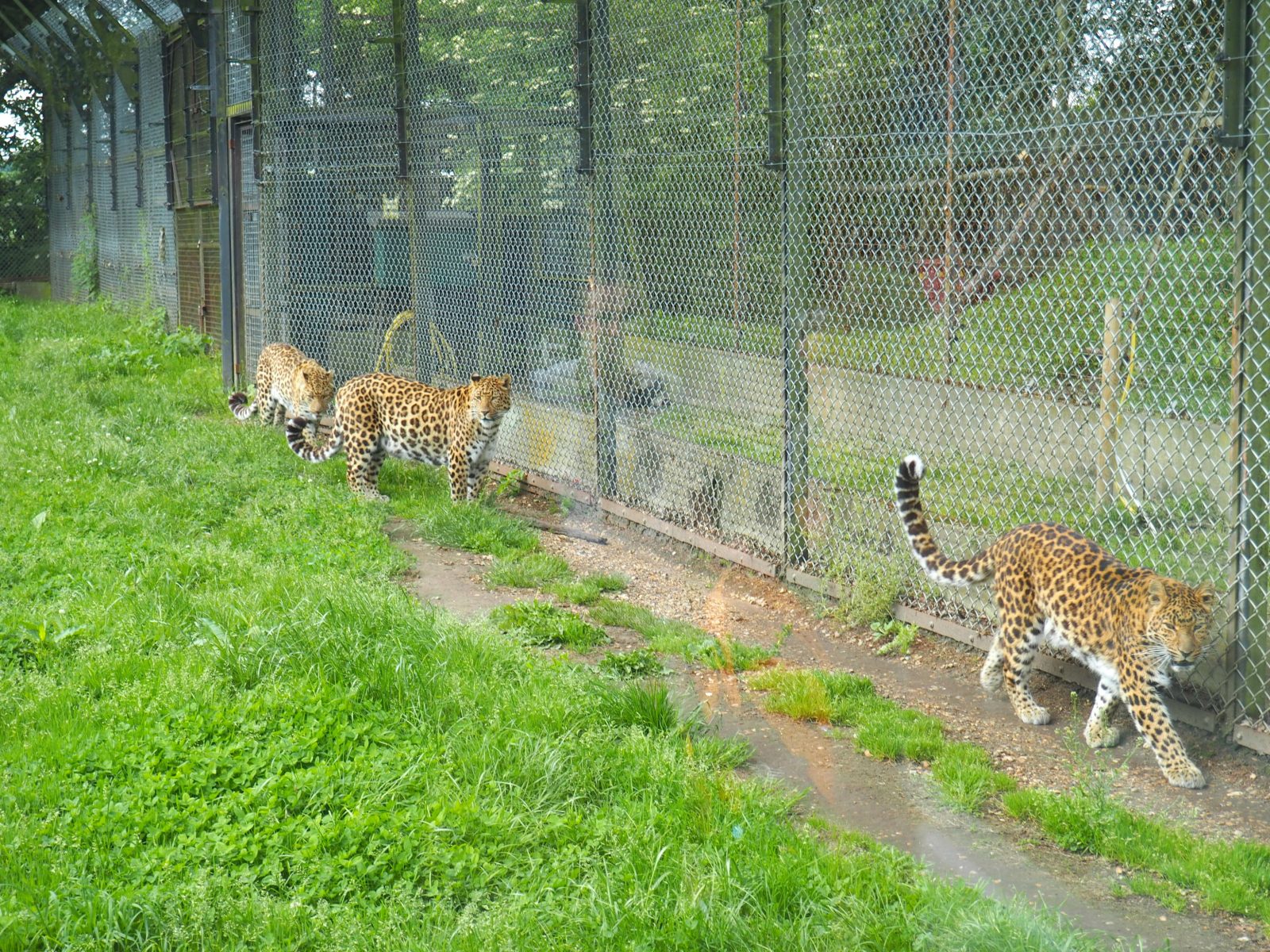 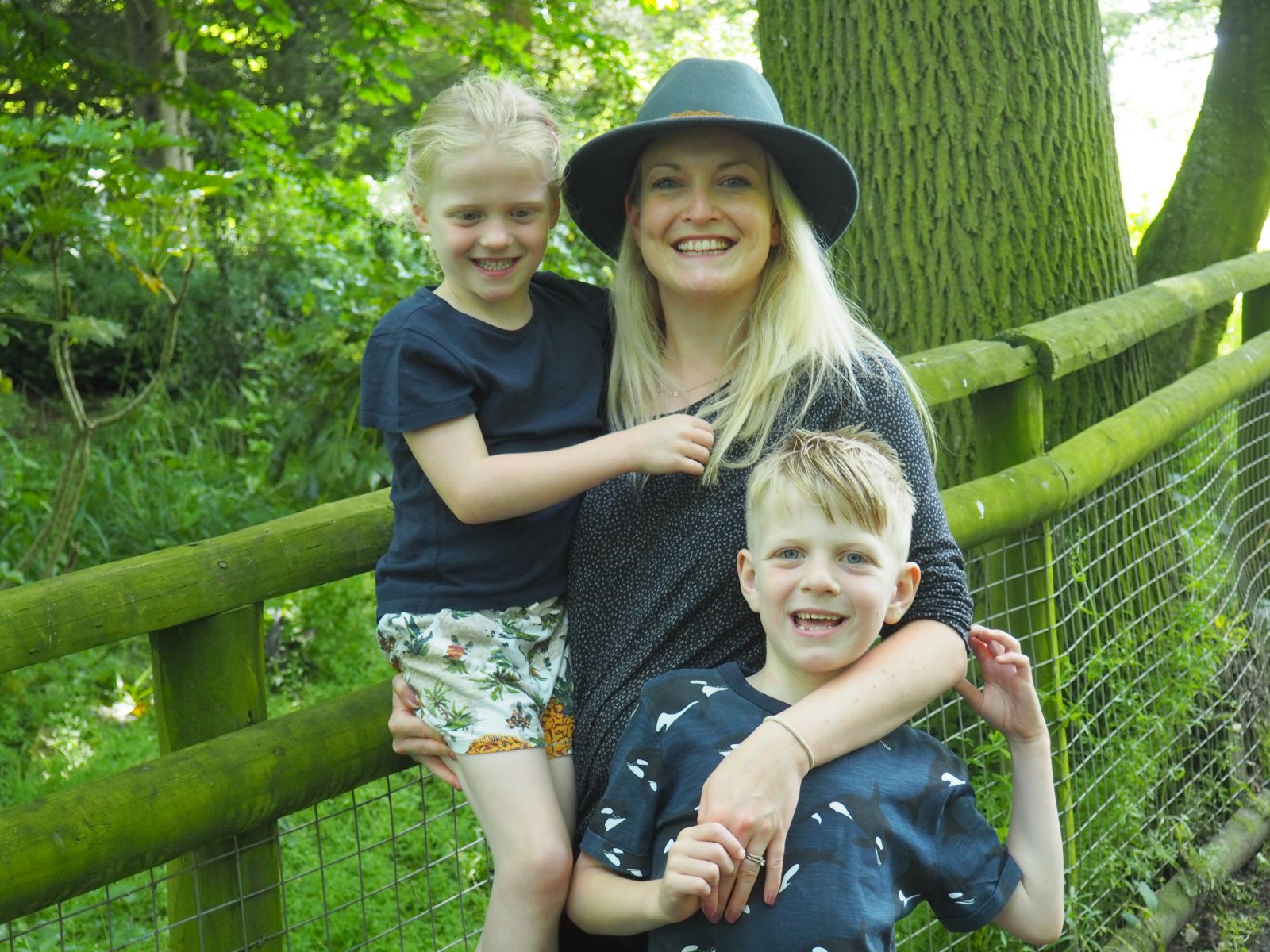 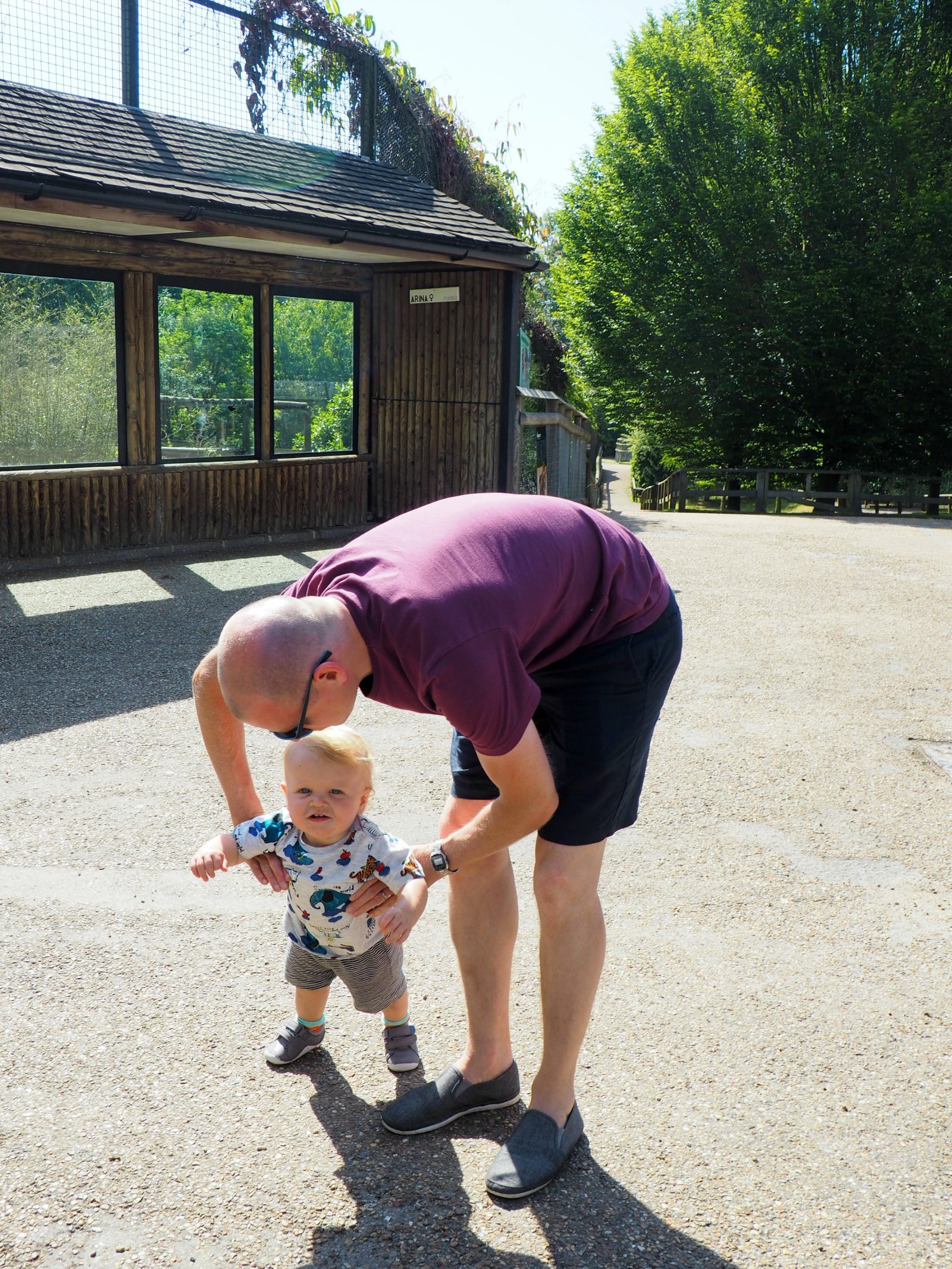 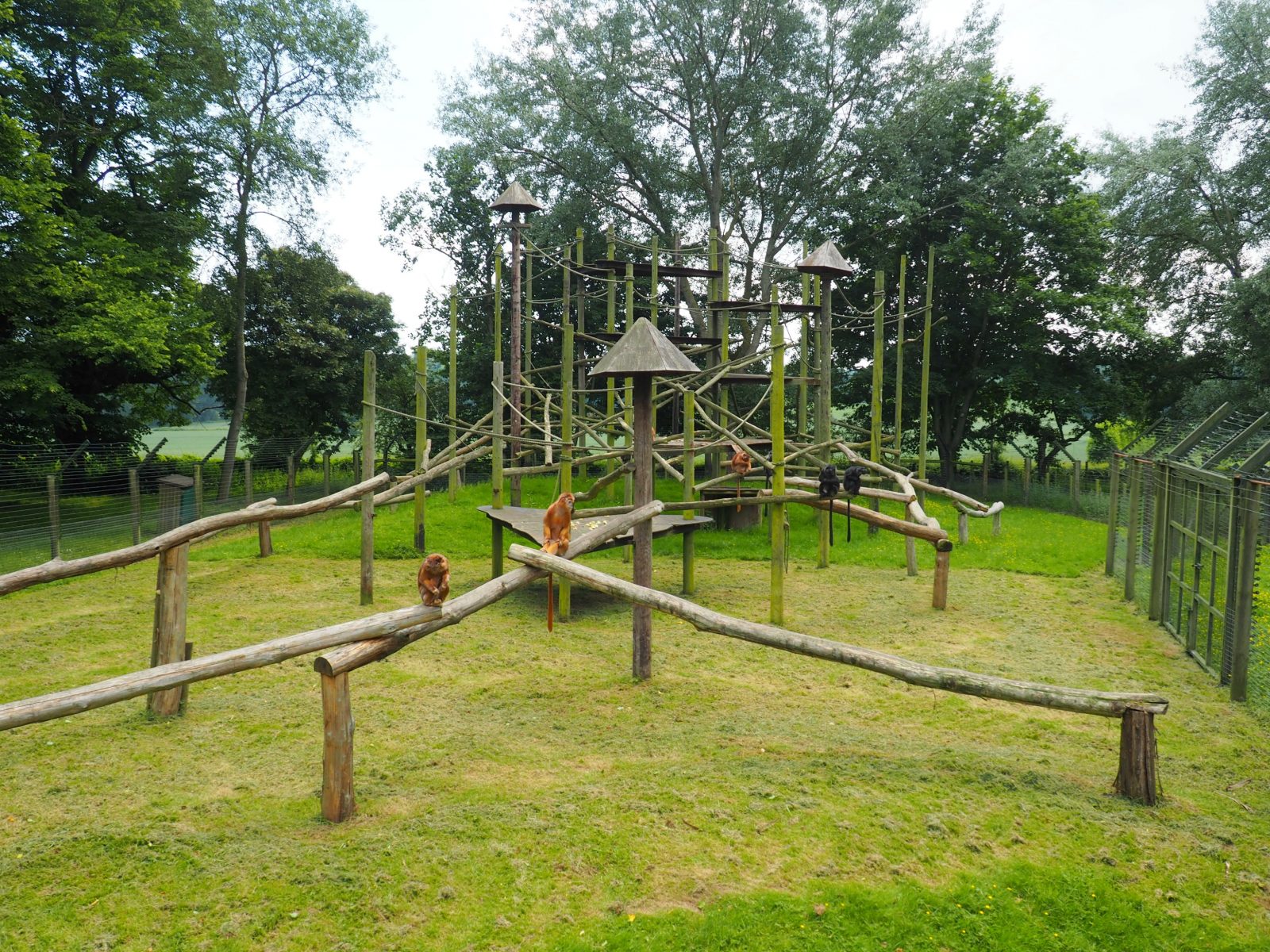 Okay, so you won’t get every animal under the sun here (no reptiles, penguins, etc) but actually I think that wouldn’t give as an authentic experience, since Howletts clearly focus on animals and species that they know, and they ‘do’ these animals well. The Wildlife Park is suitable for all ages, which is a huge thumbs up when you have 3 kids of different ages, and is very buggy friendly. Signs and animal information is set out clearly, with Freddie especially enjoying reading out the various facts (he’s definitely a fact man in the making!), and we finished our visit trying to identify which elephant was which from the viewing area overlooking their vast enclosure. 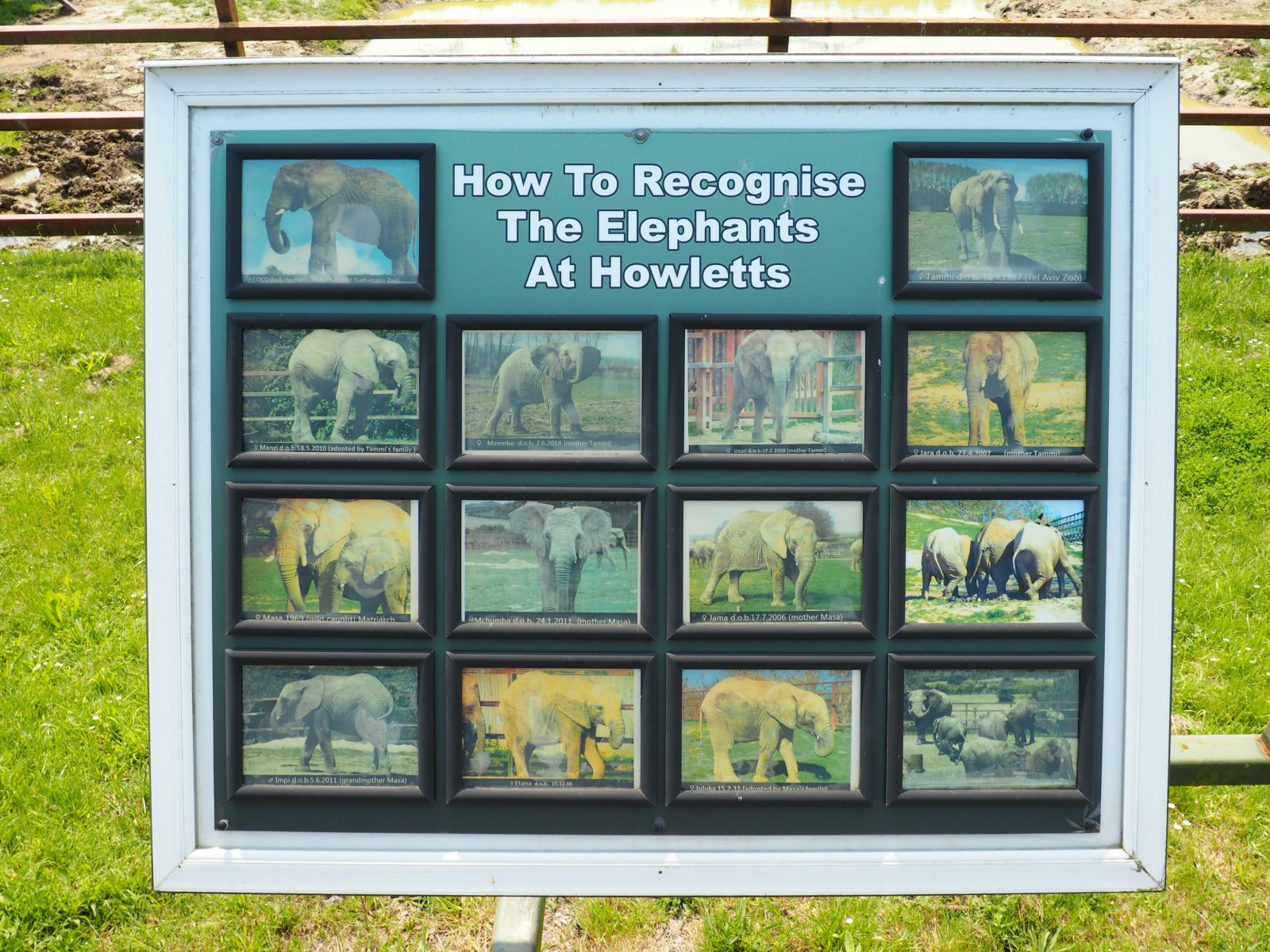 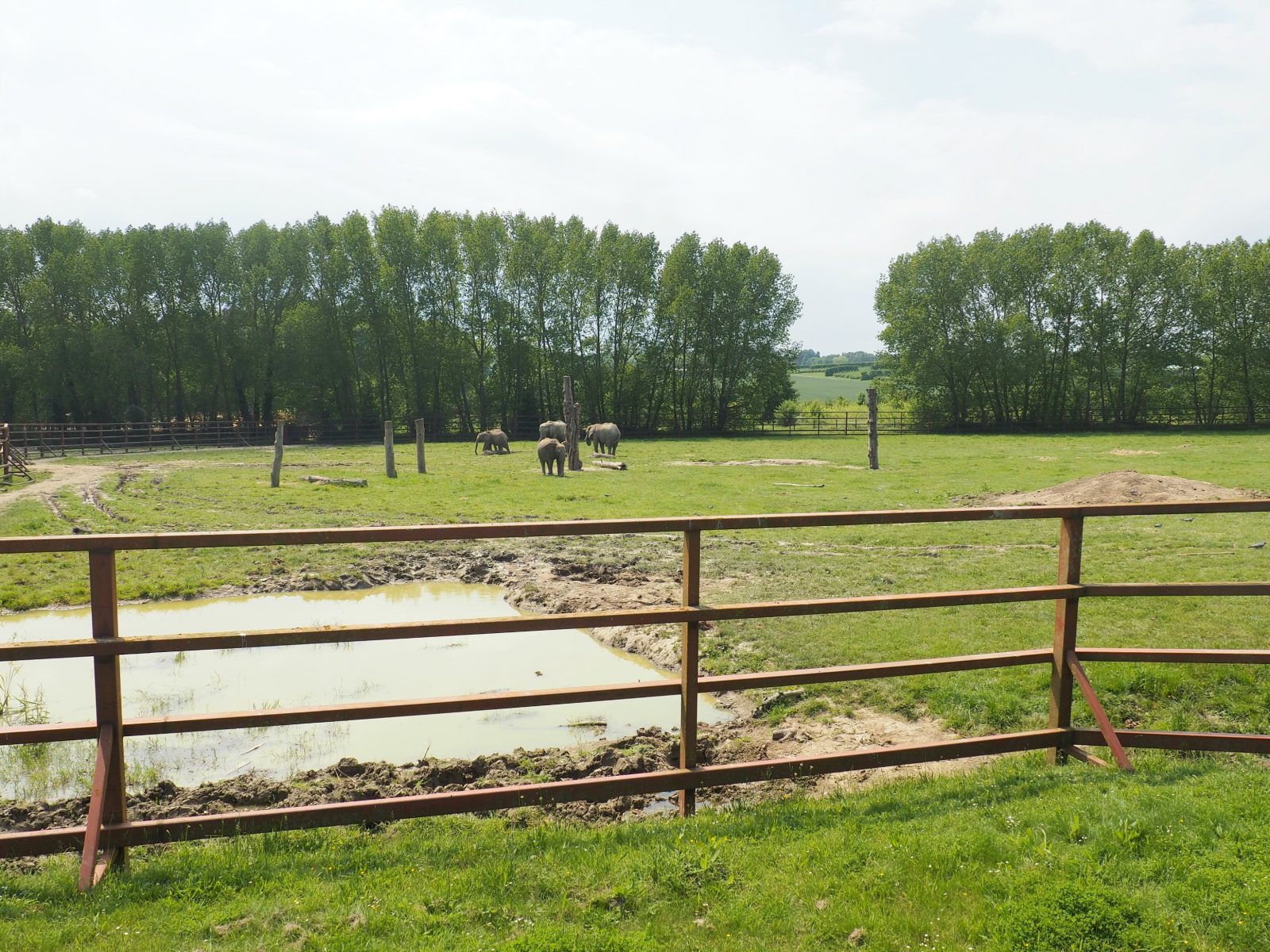 At a reasonable £21.95 per adult and £18.95 per child aged 3-15 (although cheaper if you book online), I felt we would’ve got our money’s worth had we paid for these tickets ourselves.

Howletts, we will most definitely be back!

*A HUGE thanks to Howletts for inviting us to spend a day at their wildlife park, all thoughts and opinions my own and we had a genuinely fabulous day.

See some of our other UK Adventures.