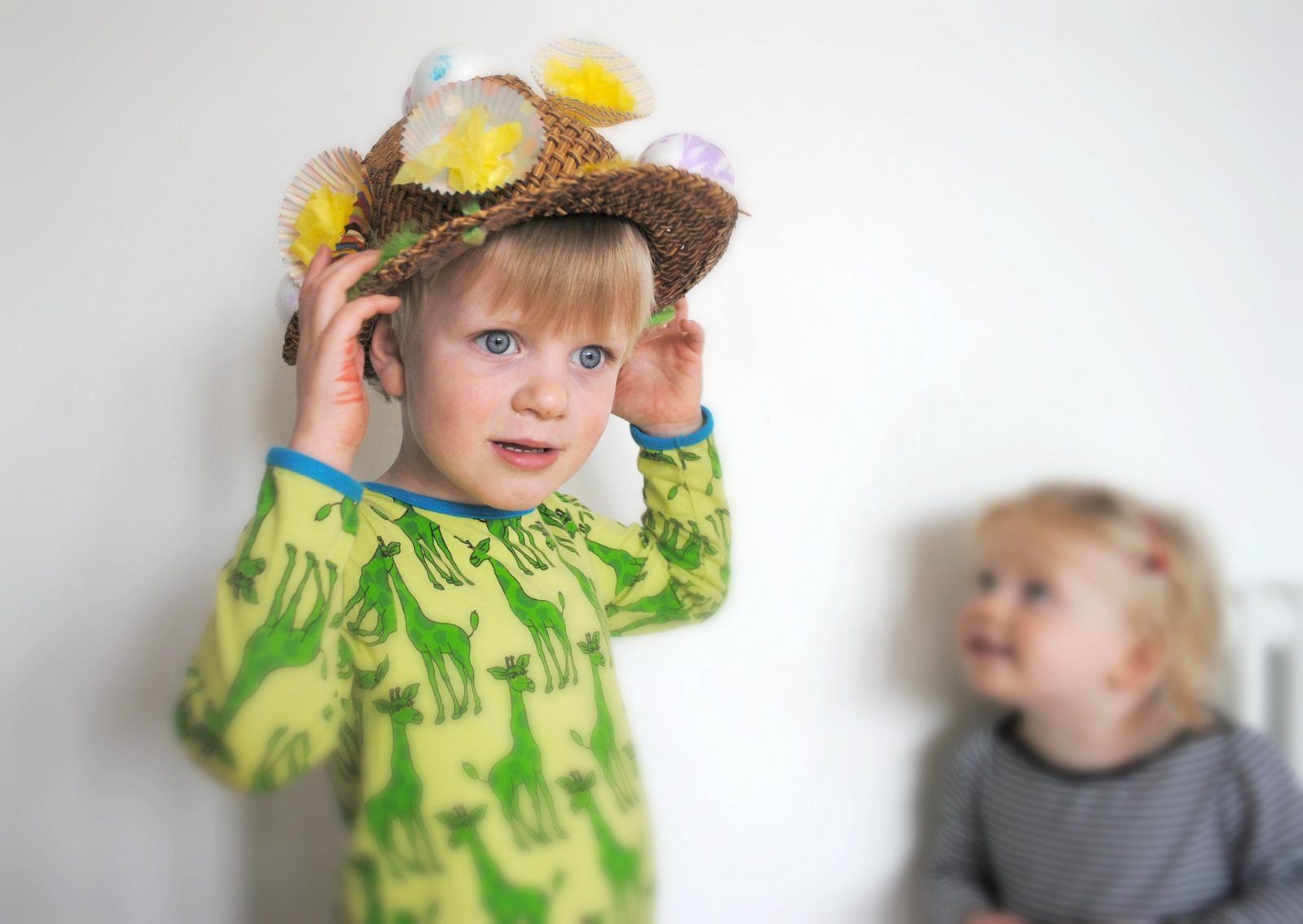 Last week, I casually glanced at my kitchen calendar to check what we had on over the next few days, and to my horror, saw a piece of paper from preschool stuck on it, that stated: “You need to help your child make an Easter hat to wear”, referring to the following day’s end of term Easter Egg Hunt and parade. Fuck.

My first thought was “Oh, bollocks”, and then this soon turned to “Aha!”, as I realised that we could probably cobble something together before the next day, using a mixture of existing craft stuff, cake cases, and toys. An old straw hat was massacred in the process, so it’s a good job I have a lot of hats. I like hats. I thought the hat should encompass spring, new life, and all things ‘eggy’, but also give a nod to the religious aspect of Easter (enter, ‘Jesus’ on a cross).

I was quite pleased with the result, but slightly pissed off  come E-Day, as hardly anyone else had actually bothered to make one (queue a few sniggers and “nice hat” comments when F made me wear it for the actual egg hunt). So if your child is told they NEED an Easter hat, here’s how you too can make one, and also set yourself up for a nice helping of egg-tastic seasonal humiliation in front of other parents!

Firstly, choose your hat. I chose an old straw one, as you can then thread some of the decoration through the wicker holes with ease:

Next, I decided to make the ‘Jesus’ on the lollypop stick cross. I hope adding this doesn’t come across as crass, but I really did want to include a reference to the man, and the children have been read a simple ‘Easter Story’ book lately, so Freddie sort of understands who he is.

First up, I sellotaped the lolly sticks into a ‘cross’, although you could superglue them together for a neater finish:

Then, I sellotaped the Happyland man to the cross:

To make a ‘robe’, and to disguise the fact this was, of course, actually not Jesus, I then wrapped a couple of sheets of white loo roll around my man and the cross, and then fixed with tape at the back of the cross:

To fix ‘Jesus’ and his cross onto the hat, I then cut a small slit with scissors on one side of the brim of the hat, and fed the end of the cross through, securing again with tape. I also attached a bit of tape near the top of the cross to fix it here to the hat, otherwise the cross would just topple over:

Next, I got Freddie and Sasha to colour in the white polystyrene craft eggs with different coloured felt tip pens. They loved doing this, and Freddie also discovered that he could make coloured holes in the eggs, by gently poking the eggs with the pens. I had bought these a while ago, with the aim of using them in a craft activity in the run up to Easter, and they really came into their own here. At only £1.99 they were a bargain, and fulfilled the brief that the children must help make the hat, and not just the adult!

Next, put some PVA glue into a pot, with your spreader at hand, and also get the super glue at the ready:

Spread/Squeeze a LOT of PVA glue into the top of your hat, and stick down some of the larger eggs into the glue, and then superglue a couple of the smaller eggs on to the bigger eggs. Leave this to dry for about 20 minutes:

Once these eggs are dry, superglue a couple of eggs randomly to the brim of the hat:

I then began to make the ‘flowers’ for the hat. Get 4 or 5 cake cases, and spread a blob of glue inside each one. Then, scrunch up a small piece of coloured tissue paper, and stick each bit into a case:

Using your scissors, cut a couple of pipe cleaners into 5 inch pieces:

Next, sellotape the pipe cleaners to the back of the cake cases with a bit of tape:

You should end up with several of these:

Thread them randomly through different parts of the hat, and fold down and tape the end of the pipe cleaner so it doesn’t poke the wearer in the head!

Finally, using a bit of superglue, stick a few of the craft feathers into gaps around the hat:

And there you have it… Your emergency Easter Hat!

…Never be afraid of being caught-short again!