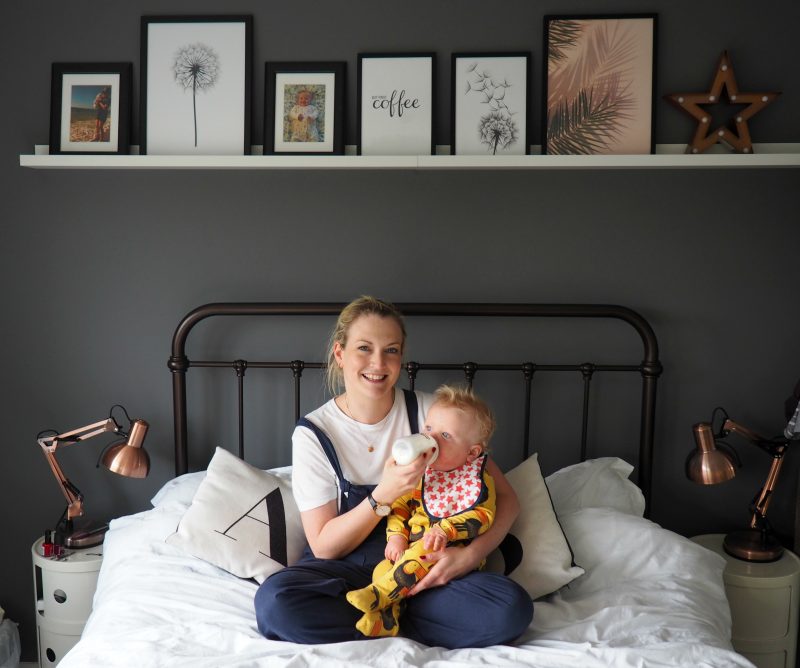 I can’t believe that Arlo is 10 months old now! In many ways even though he’s on the move and into everything, life is getting easier in terms of less bottles, more (often hilarious) interaction and a bit more decent sleep. I thought I’d write a bit about his day-to-day life when he’s with me for the day, as I wish I had something like this from when the big two were babies to look back on.

In fact, it would be really handy now as I can’t seem to remember a lot and remembering if/when I did certain things wouldn’t half be useful sometimes!

Arlo is at home with me 5 days a week, and spends one split day a week with his childminder and my-in laws, and the other with my mum whilst I work.

Arlo wakes up, hopefully after sleeping through the night which is a recent development and one I very much hope stays around. There’s nothing like a full night’s sleep for making you ready and raring for the day ahead, as opposed to feeling like a sack of shit and skulking around the Nespresso machine for half the day. This is a VERY early wake up time for some people, but now we count this as sleeping through, and I’ll take this over multiple night wakings any day of the week. As you can see here, he’s ready and raring to go! 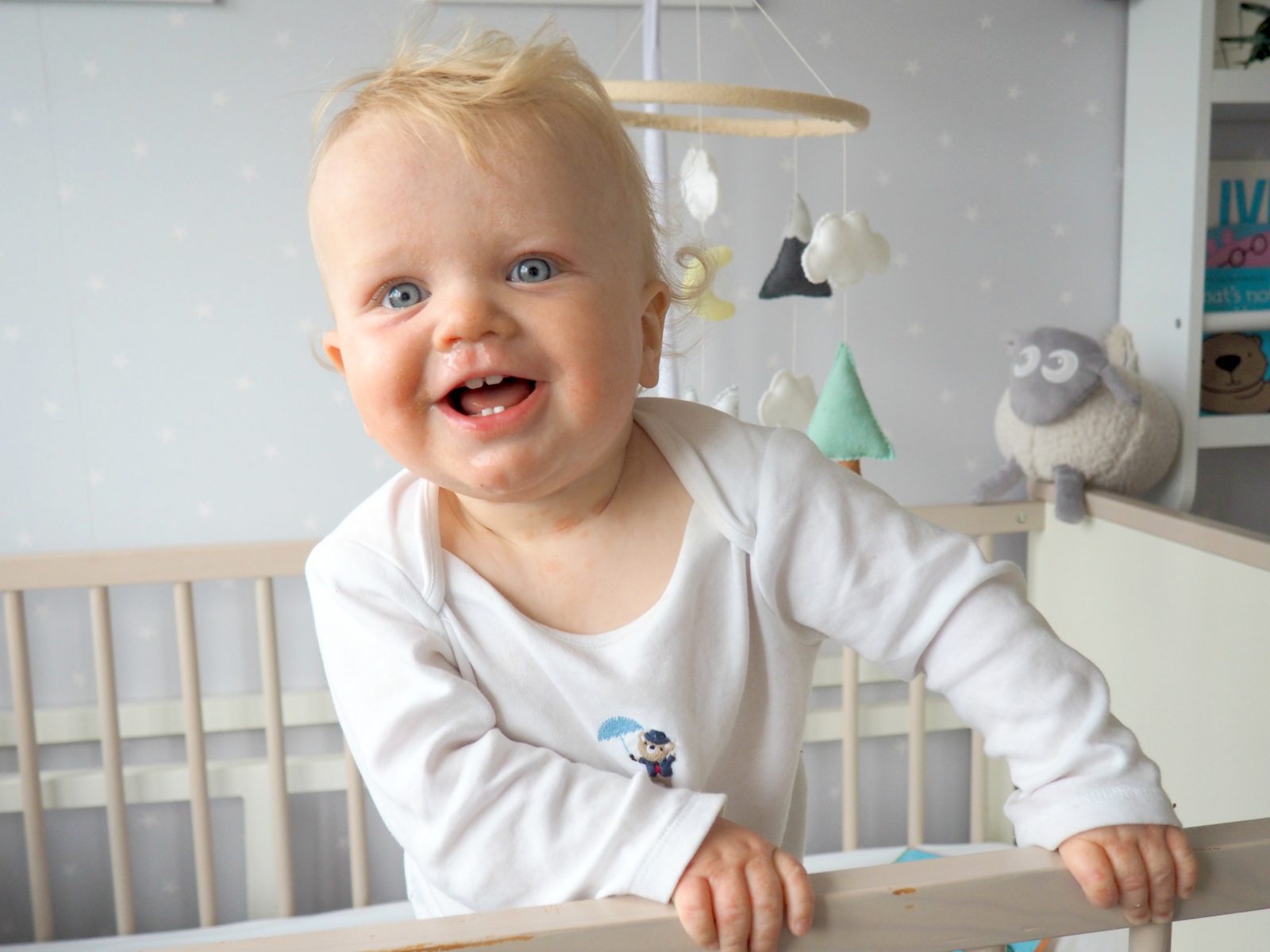 Arlo is usually very happy to see us (unless we’ve been snoozing too long and have been accidentally taking our time), and can now sit up from lying down in his cot. We change his nappy, and then bring him into bed with us for his 7oz morning bottle that he guzzles down at a rate of knots.

We go downstairs and feed Freddie and Sasha breakfast as they tend to be starving and it means they can have this and then start getting ready for school. In the meantime Arlo plays with his toys, or, more likely, goes around the kitchen causing havoc and playing with the bin/integrated freezer grate/dishwasher whilst it’s being unloaded/plug sockets etc. We now have a stairgate on the kitchen door so he can’t escape elsewhere in the house.

Adam and I take Arlo upstairs so I can have a shower, get dressed and so my make up, and Adam watches him whilst getting ready himself. He plays with toys in his room, and usually one of the big two comes along to play with him at this point which is a huge help. 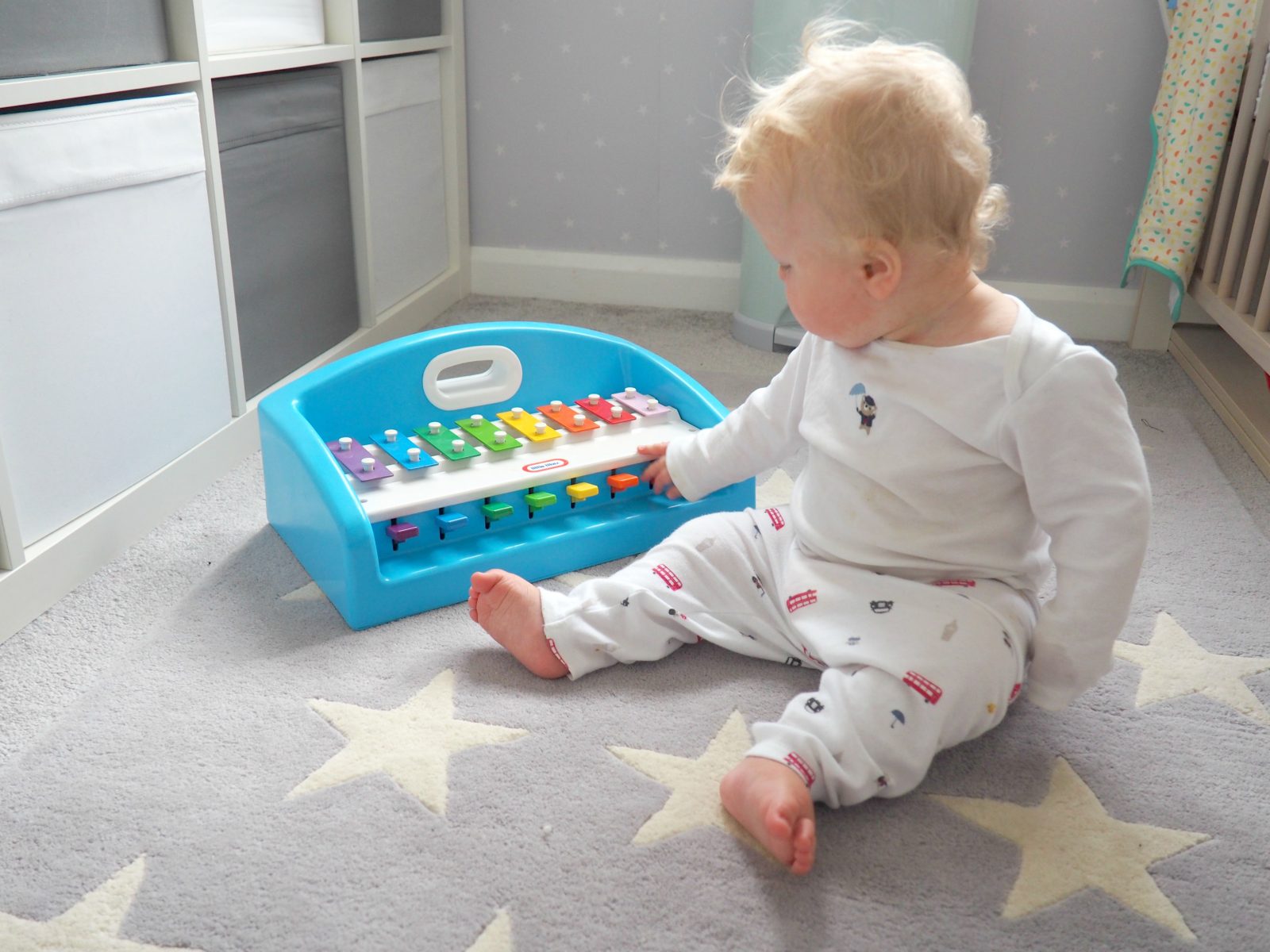 Breakfast. By this point his lordship is most definitely hungry and lets you know this by wailing in his high chair until he gets his first mouthful. He usually has either porridge or a warm weetabix with milk, with some mashed/sliced banana, and also half a fruit pot too.

Another nappy change, get dressed, clean his teeth (he’s surprisingly really good at this and opens his mouth wide for you), and then I pack his change bag depending on where we’re going that day. About 8.15 I’m starting to bellow and the big two to put their school shoes on, and trying to stop Arlo destroying their lego creations in the process. 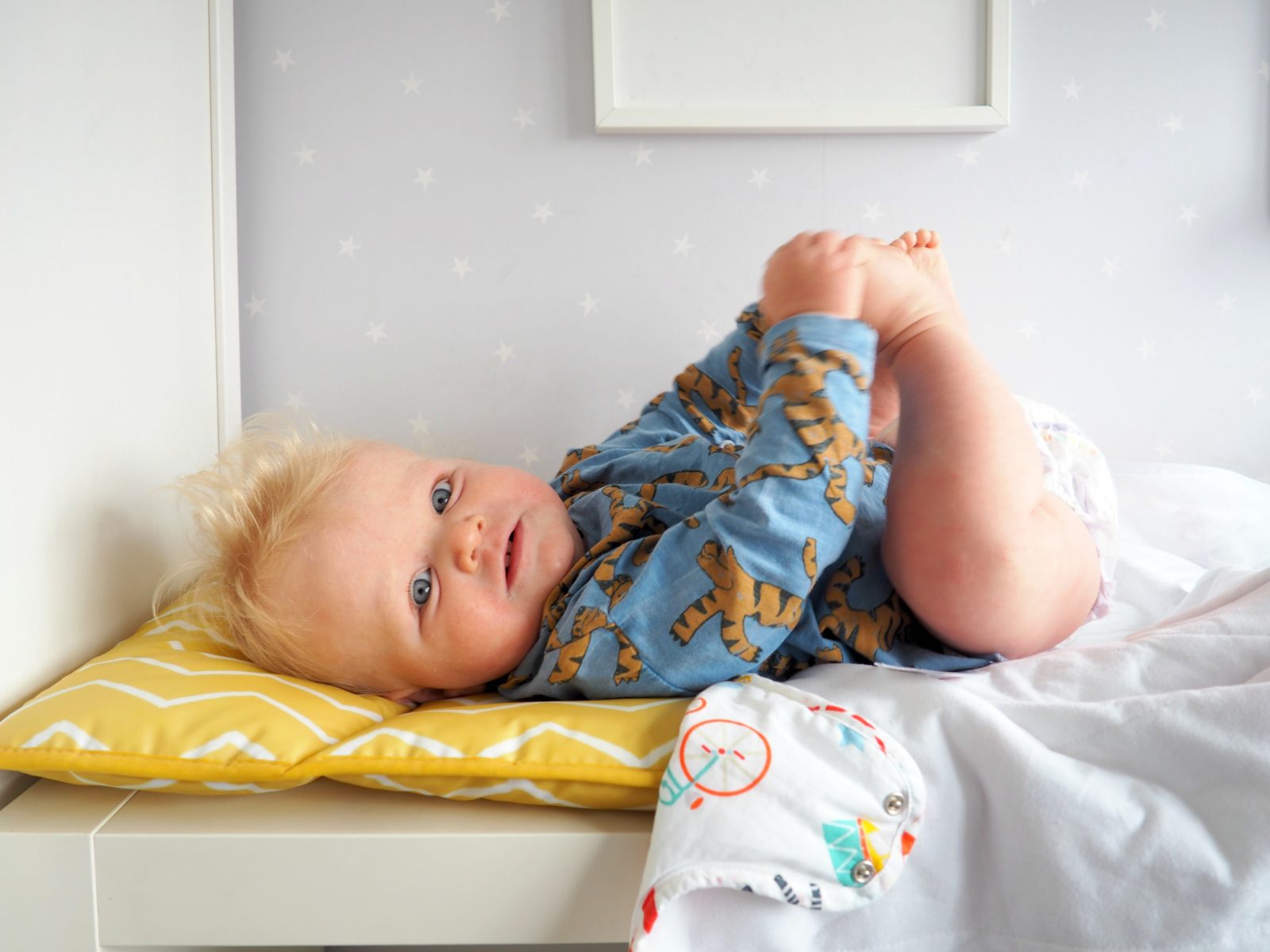 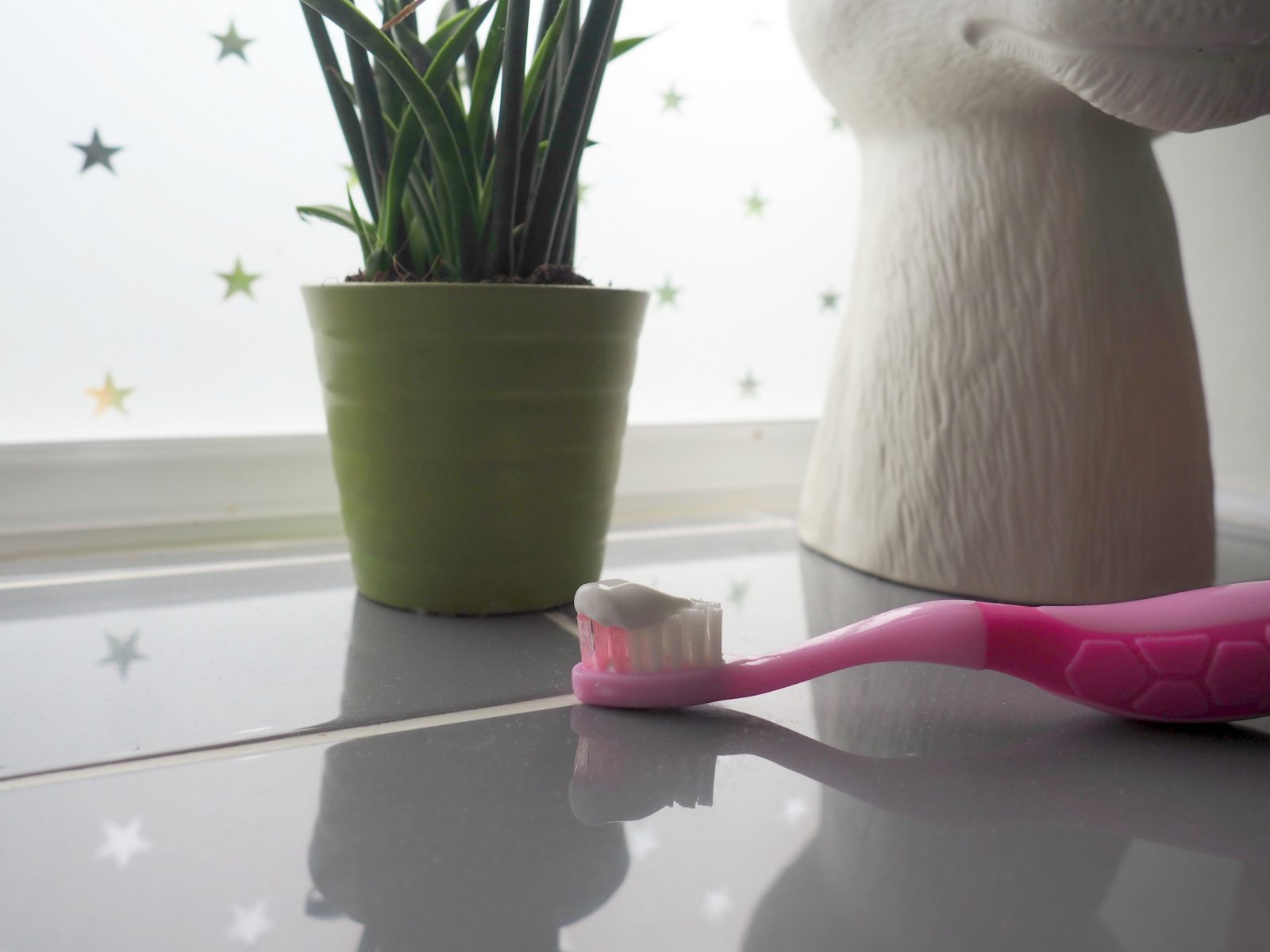 Arlo is slung in the buggy and off we go to do the school run. He seems to really enjoy being out and about, and the way we walk to school is beautiful, so it’s not a chore for any of us. By the time we say goodbye to Freddie and Sasha at the school gates, he’s usually starting to get tired.

Nap. This is taken either out and about in the buggy if we’re off on an outing, or in the car, or if I’ve come home for the morning I’ll out him down to sleep in his cot. He usually sleeps between 30 minutes to an hour, and always seems to be for less when you have lots of stuff to do…

We usually like to get out and about in the morning, and they could be spent at a baby group, attending song time at the library, swimming, meeting friends, going shopping or just for a really long walk. I’m going to take him to soft play on the next wet weather day, as I think he’d really enjoy the baby bit now he can crawl and pull himself up. 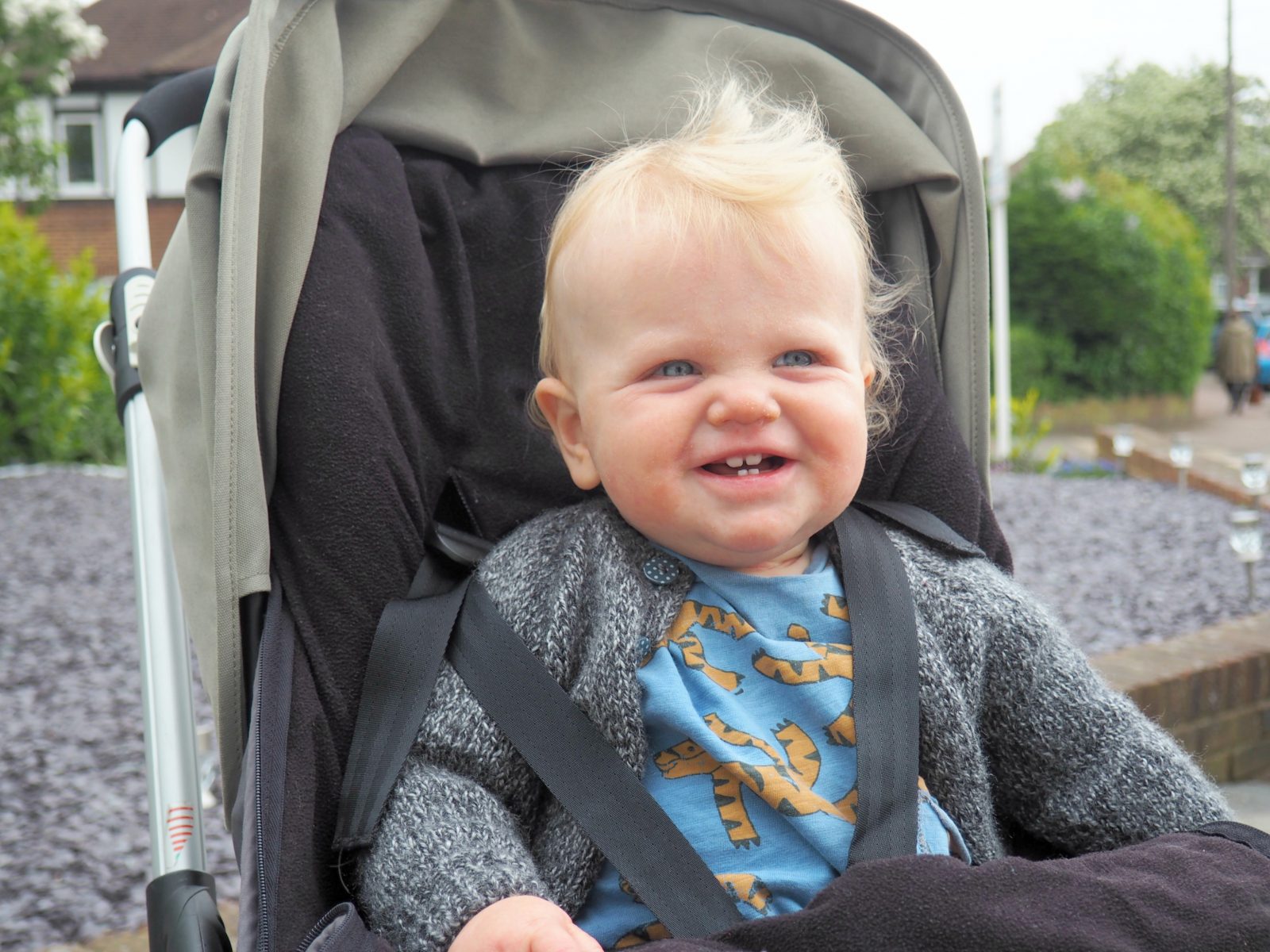 If we’re not staying out over lunchtime, I like to be back home by about 11.30am so I can start preparing lunch, and so there’s no danger of him falling asleep on the way back- this kid does not transfer from buggy to cot well! Lunch is usually a hot meal at the moment that I feed him with a spoon (although we’re encouraging him to use one himself now). He usually has a mashed up version of what we’ve eaten minus the salt, and sometimes an Ella’s Kitchen pouch if I’m pushed for time. We’ve been lucky that like his big brother and sister, so far he’s a great eater. Current favourites include: fish pie and broccoli, salmon and homemade chips, cottage pie, bolognase and mini pasta starts, omelettes (he can eat these himself) and cauliflower cheese. He’ll either have some fresh fruit for pudding (can’t get enough of raspberries) or a mini yoghurt (we like Yeo Valley Fromage Frais).

Nap in his cot. He sleeps in a Grobag with his hand-knitted blue bunny snuggly thing (thanks, Pauline!) and has Ewan the Dream Sheep playing music in the background. We really need to get some kind of blackout blind now the weather is brighter (we did with the other two in our old house), as he doesn’t tend to nap more than an hour usually. The holy grail is 2 hours, and I get so much done when this happens! 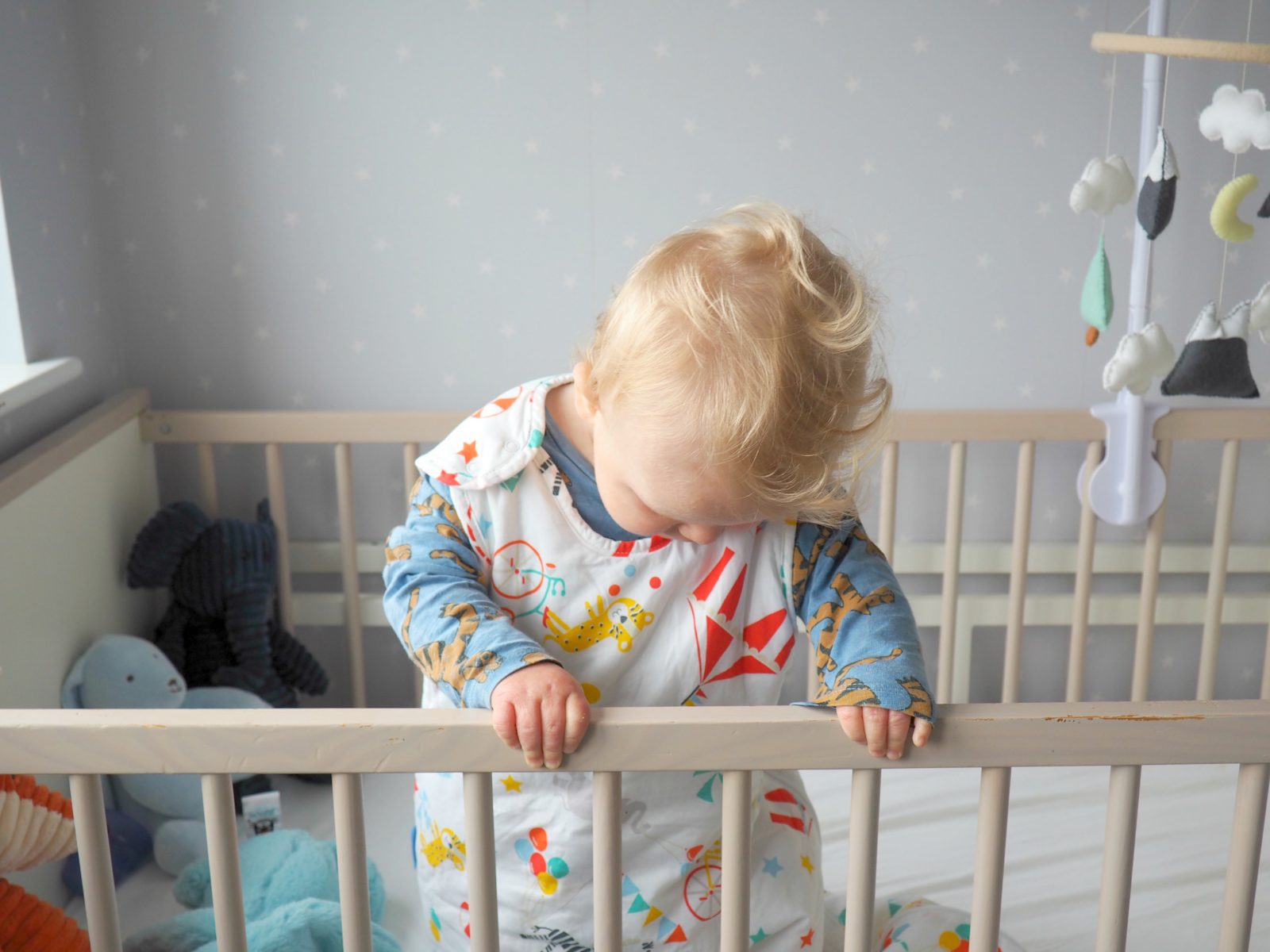 Wakes up (if not before), nappy change and then 4-5oz of formula, which we’ll cut out within the next couple of months I should think. I’ll then play with him for a bit, as hopefully I’ve managed to get some jobs done whilst he’s kipped. 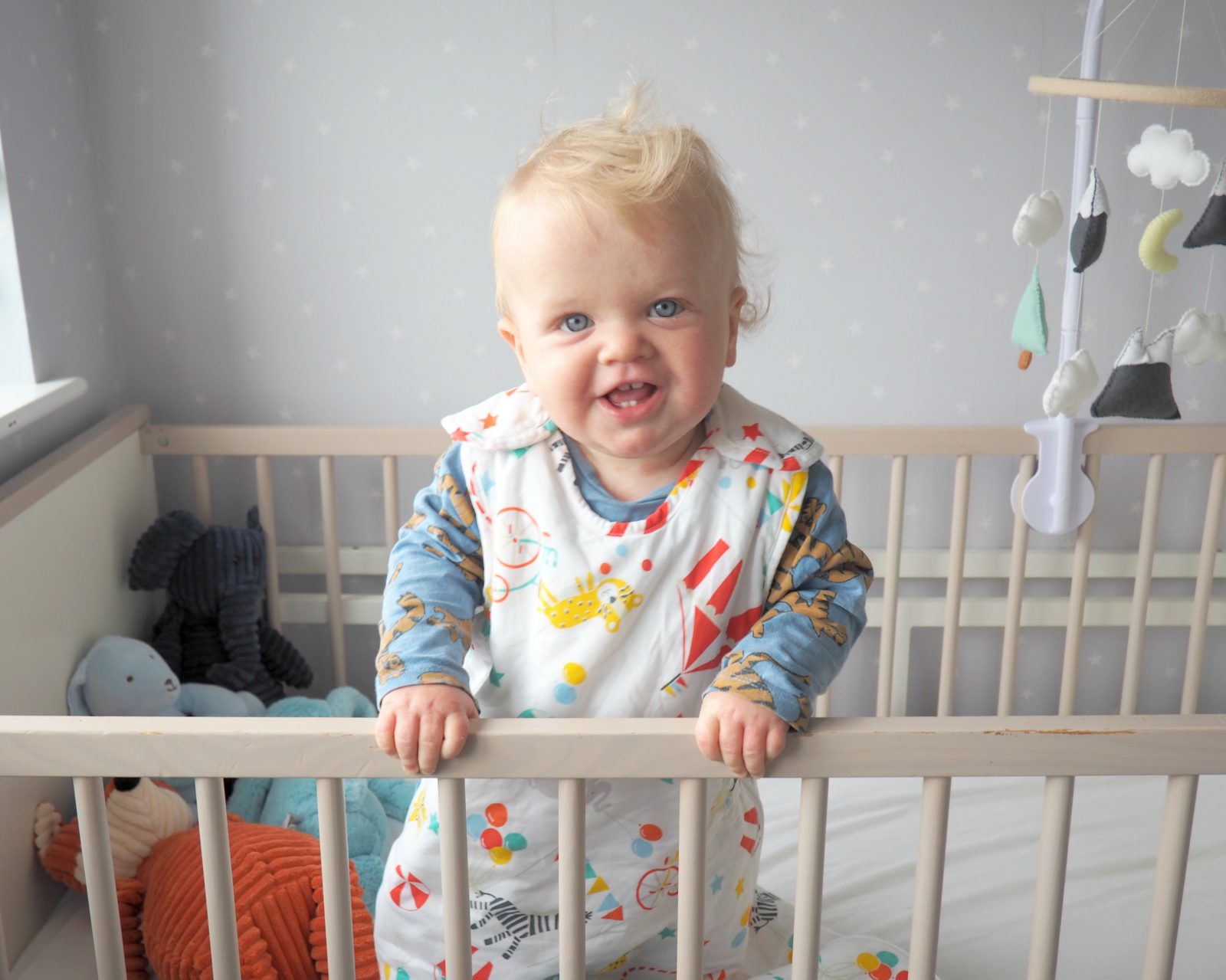 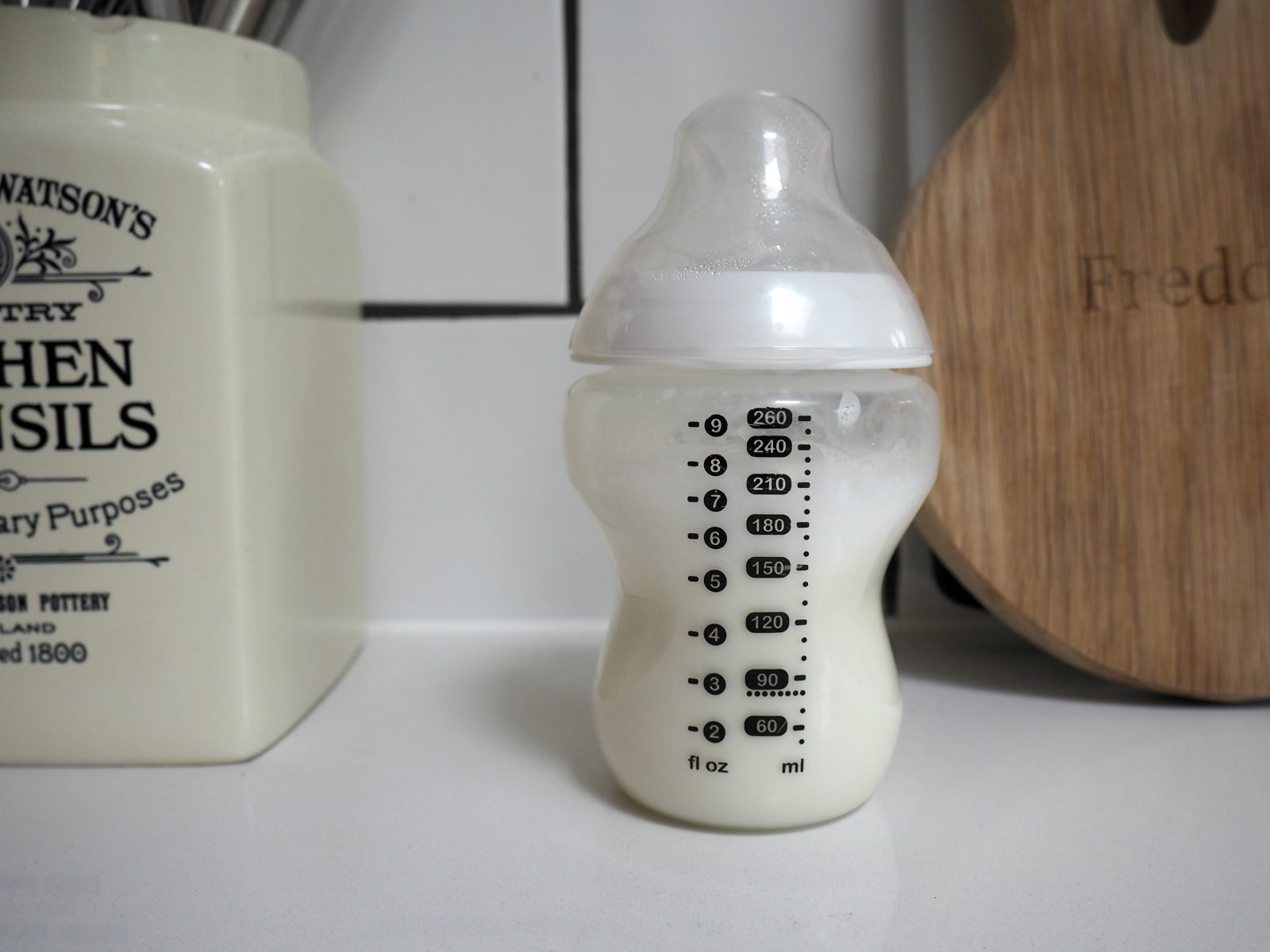 School run time- another walk to school and back, or maybe in the car if we’re going onto an after school activity.

If we’re not running around to the big two’s clubs, we’ll come back and I’ll chat with F and S whilst having a cuppa and playing with Arlo. We’ll read some books maybe, and I’ll get some fresh toys out so he doesn’t get bored. At the moment he’s also enjoying pulling himself up to standing on everything, so I’m often hovering in the background for damage limitation purposes! Sometimes a cuddle with a bigger sibling is also what’s needed too…. 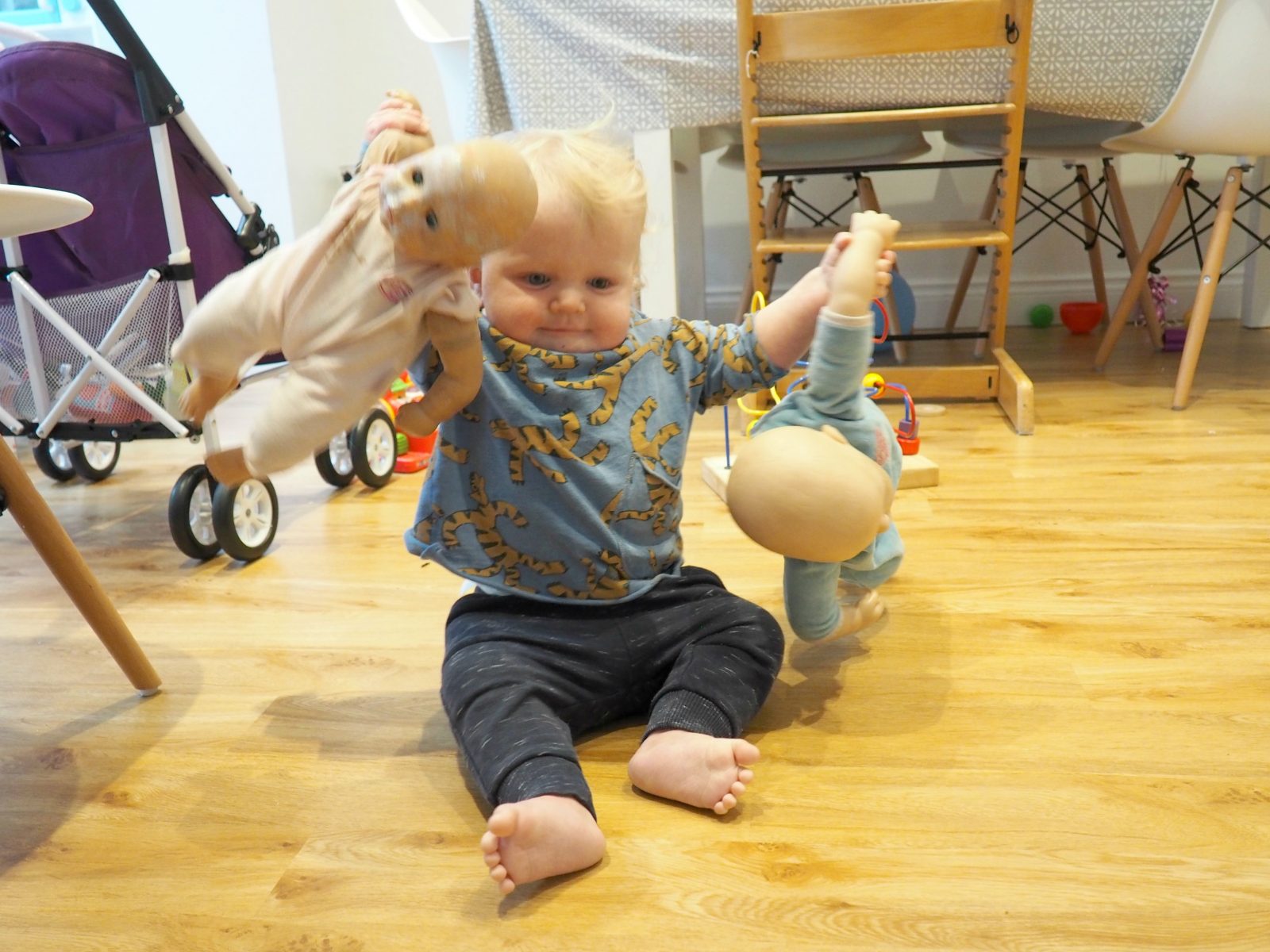 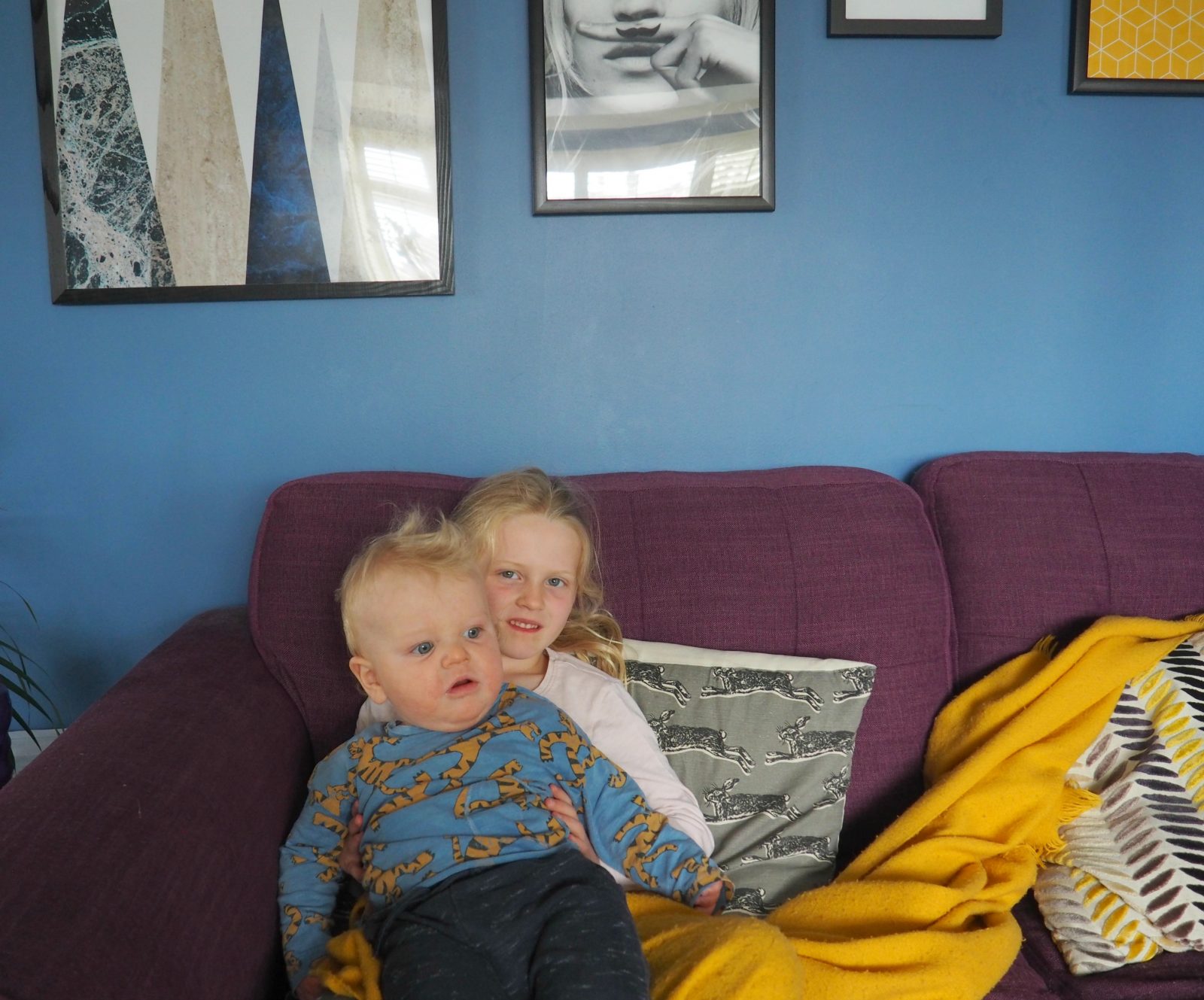 Tea for all 3 children (as the big two claim to be constantly starving, you’d think I never fed them!). They tend to have sandwiches, something on toast or a jacket potato as they have a cooked school lunch, and Arlo has the same. He loves egg sandwiches that he feeds himself with, and I usually chuck some Organix baby crisps and sliced up cucumber and tomatoes on this tray too. Pudding is fruit (he also loves sliced bit of mango, melon and strawberries) and sometimes a wholemeal rusk to gnaw on if I’m chatting to F & S or helping them with something. 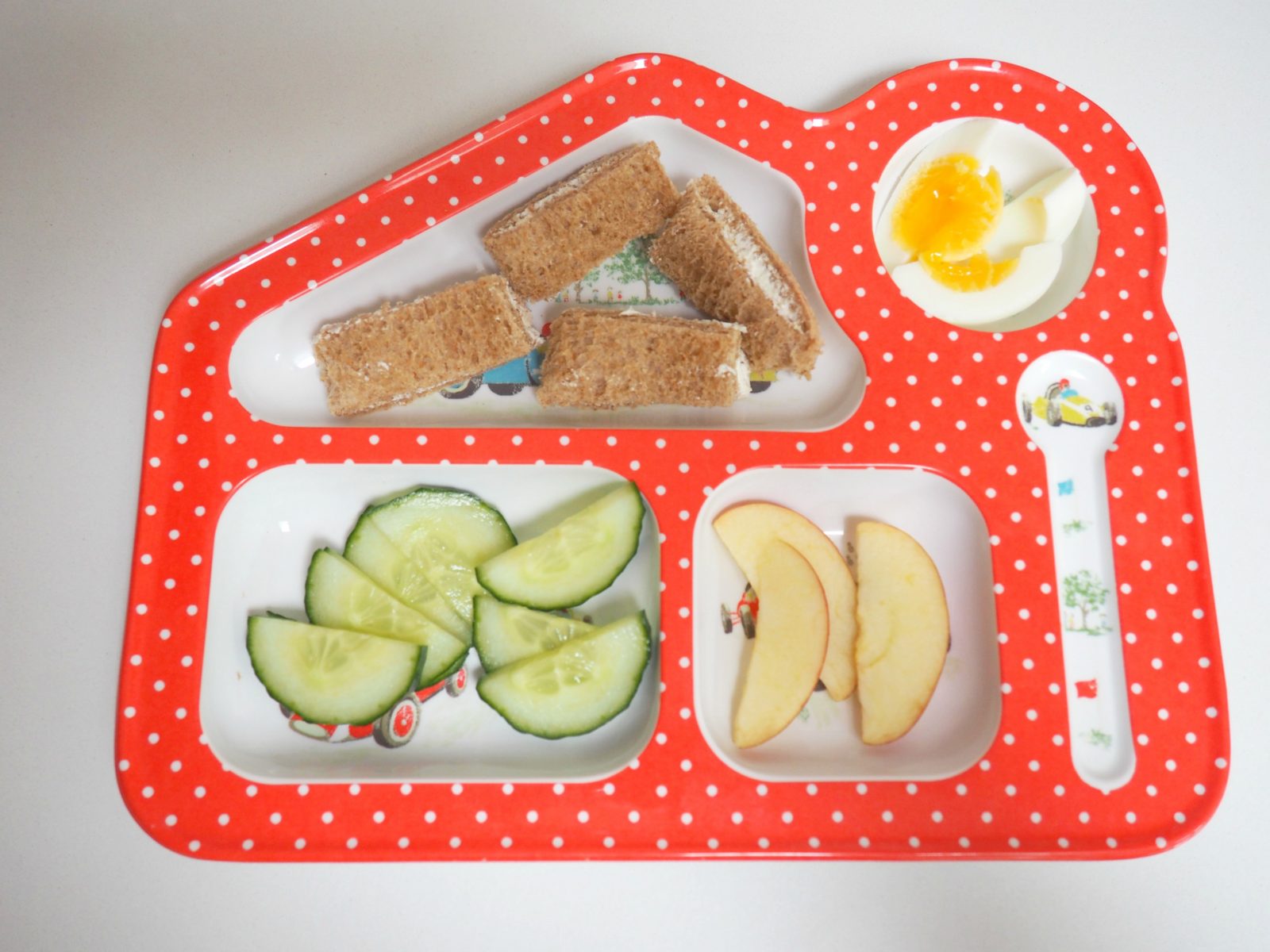 We usually play with Arlo, or I’ll play with the big two and just generally hang out with them. Sometimes after tea if the weather’s nice I’ll take him to the baby swing on the climbing frame in our back garden, which he really loves. I’ll also carry him and play football with Freddie, although this is getting trickier now he’s getting heavier!

Before bed Arlo will have the obligatory bedtime bath, complete with bubbles and bath toys, which might possibly be his favourite time of day (big water fan here). He loves playing with the plastic bath animals and sea creatures, and has just learnt how to do an impression of a fish, complete with opening and closing mouth #genius 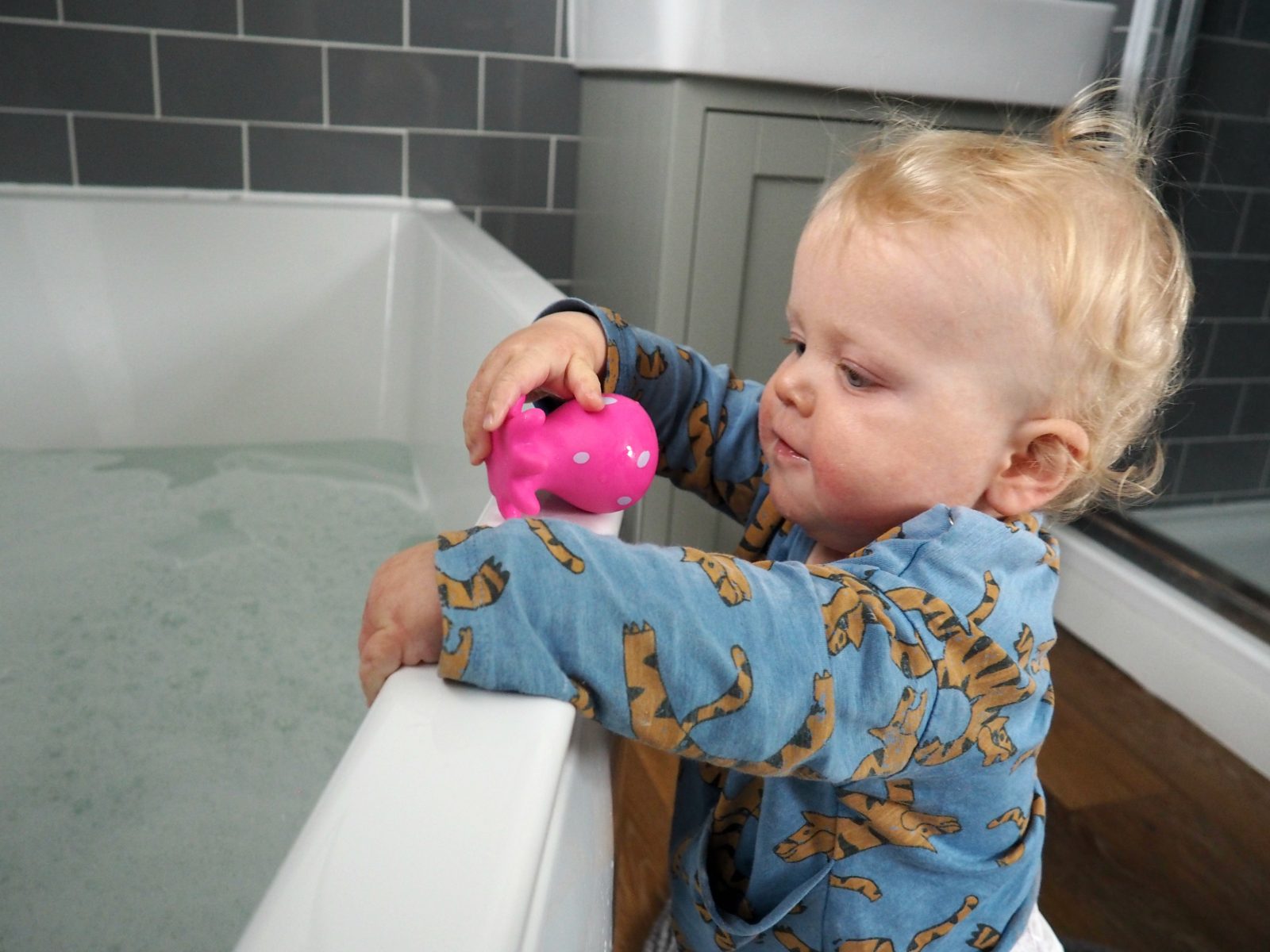 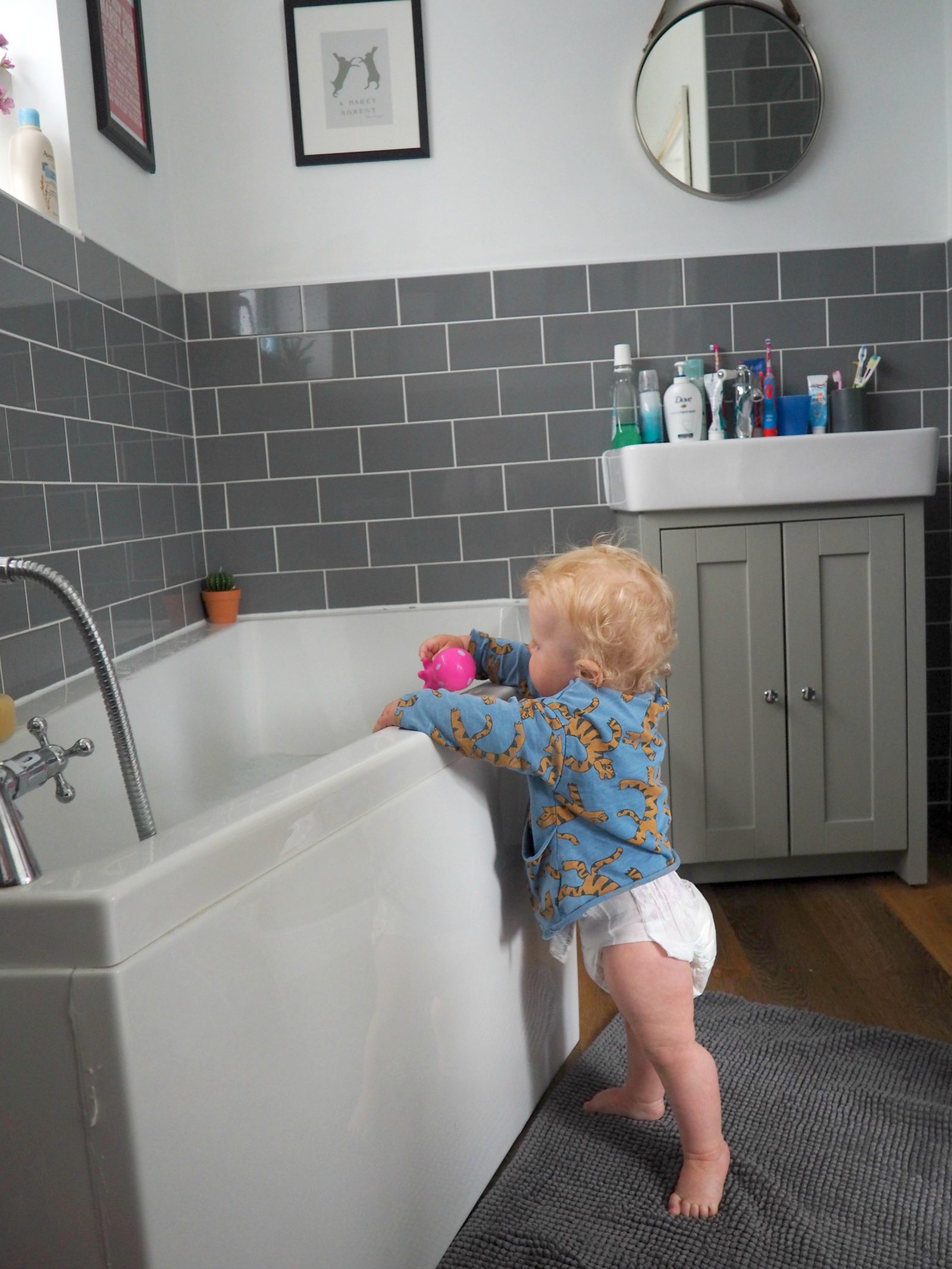 By this point he’s usually getting a little fussy and might scream his head of whilst you get him dry (often goes bonkers when you get him out of the bath), and he’s definitely tired, especially if he had a short lunchtime nap. We cream him up, change his nappy and put a new sleepsuit on. Often Adam will take over for this bit as he’s back home from work, and I’ll make his 7oz bottle up. 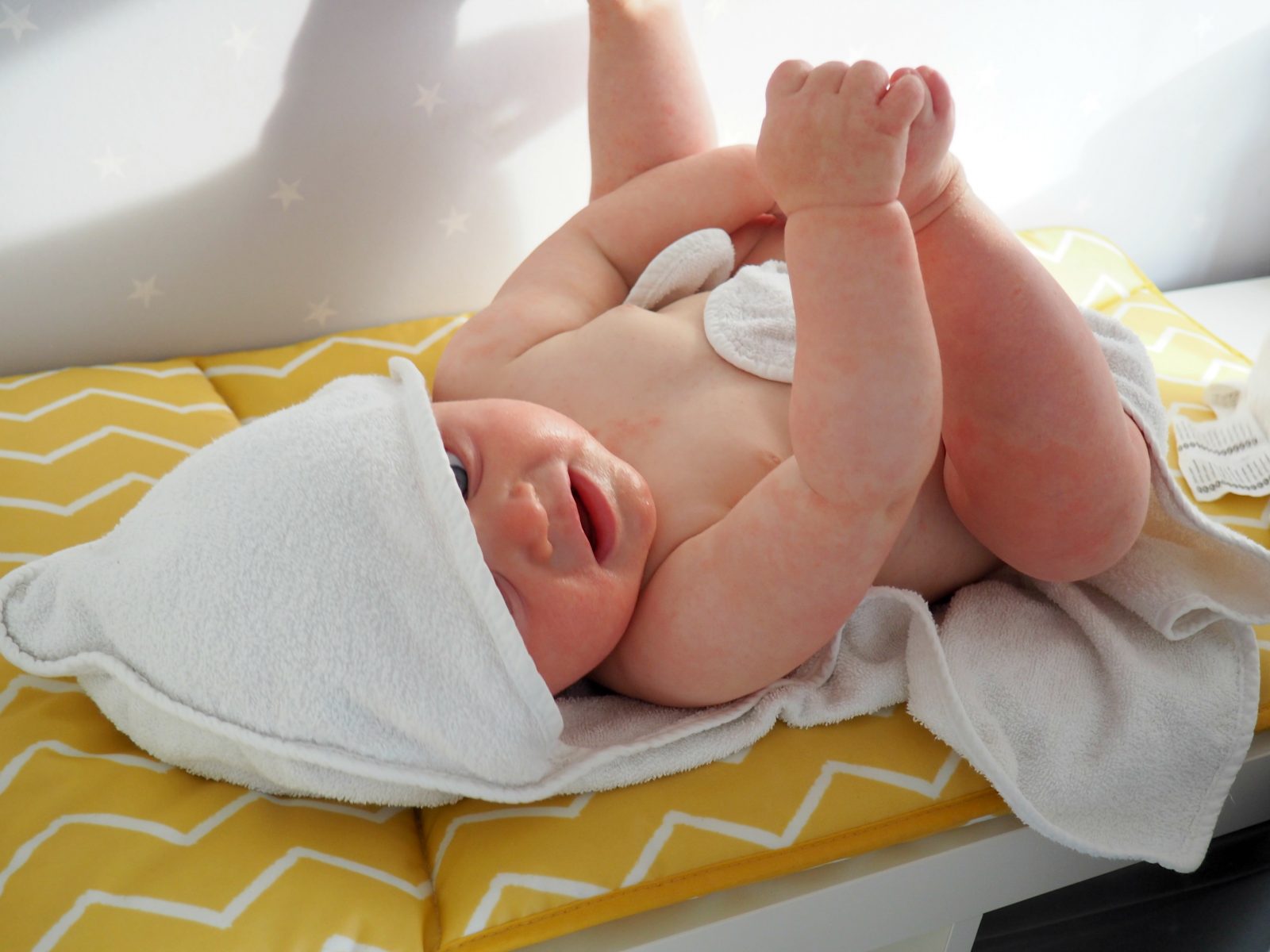 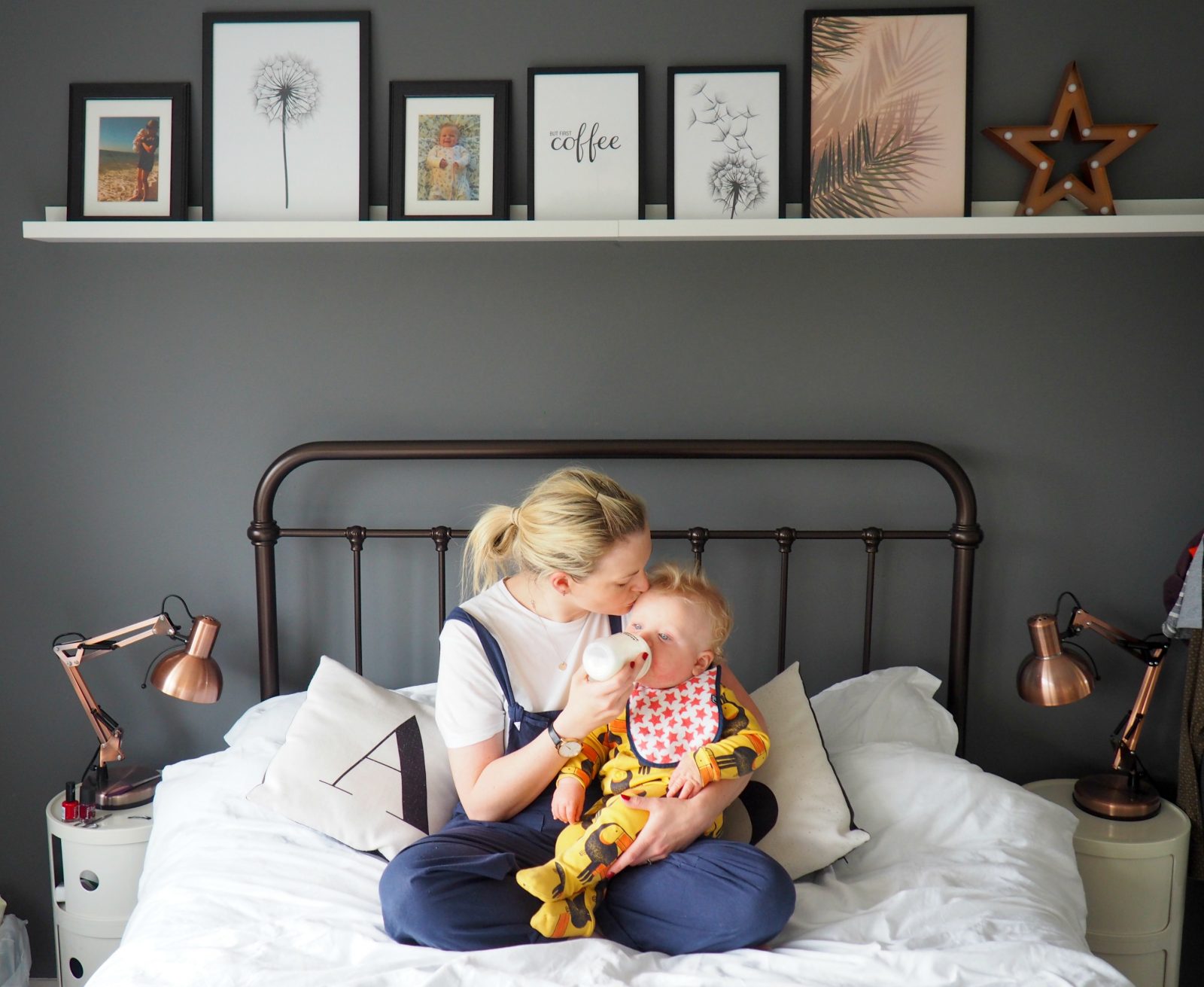 One clean and fed baby is zipped into his sleeping bag, teeth cleaned, and put down in his cot to sleep, where he nods off pretty much straight away- and hopefully stays asleep until about 11pm when he has another bottle (that we’re desperately trying to cut out!).

And there you have it, Arlo’s 10 month old routine! I love looking back on these posts to remember how things were, and also how much things change.

What’s your baby’s routine like, or what was it like at this age? Any similarities or completely different?