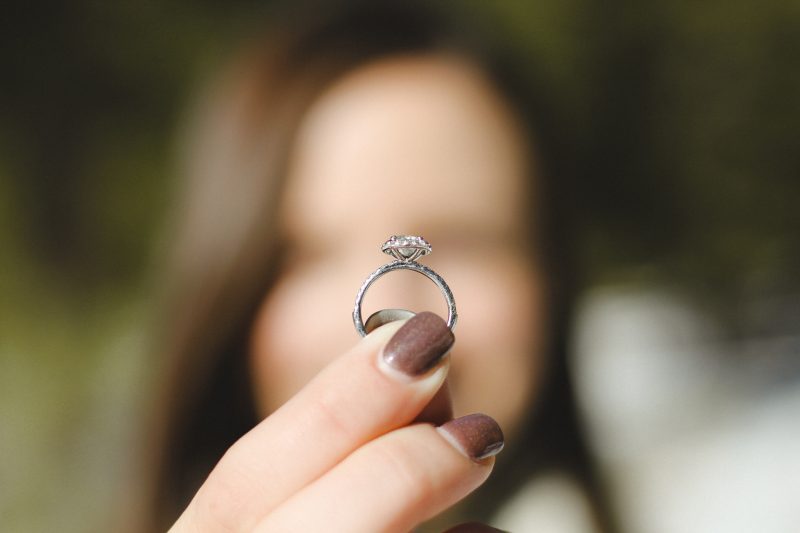 Superficial as it sounds, one of the things that I was pretty excited about upon getting engaged (apart from marrying the love of my life, yadda yadda) was going shopping for a ring! It’s funny, as pre-kids we weren’t actually bothered about getting married, but once the older two were here we decided to solidify our relationship and take the plunge (which shouldn’t be a big deal as having a baby together is definitely a biggie in itself!).

I had to admit that I didn’t know that much about getting a ring at the time, but after a lot of research we felt more knowledgeable to choose the ring we (or rather, I, obvs) wanted, without getting ripped off. We had a healthy budget to spend on something nice, but at the same time going mad for the sake of going mad wasn’t a huge priority, what with two young children. I wanted something gorgeous-yet-natural and not too over the top.

Here are some tips I learnt when it came to choosing the best ring for me….

If you are planning to join the 75% of British men who buy their “special lady” a diamond engagement ring before they’ve laid eyes on it, you will want to pay close attention to what I’m about to write. This is not something you want to cock up! Not only are you possibly about to part with a substantial amount of cash (all women know the engagement-ring mantra about the fiancé waving goodbye to at least a month’s salary), but you are also about to buy something that the lady in your life will (hopefully) be wearing until the end of her days.

First, a geology lesson: diamonds are 99.95% pure crystallised carbon and can be extremely old – one to three billion years old, in fact. They are the hardest naturally occurring substance known and are formed beneath the Earth’s surface when crystals of diamond occur in volcano feed-pipes. When volcanoes erode down, they release diamonds from their feed-pipes into layers of gravel which are later mined. Diamonds in their natural state are relatively rare though, so diamond mines are found in just a handful of sites around the world. In rough form, diamonds are shipped to cutting centres to be shaped and polished, before being set as jewellery i.e engagement rings. The hardness, brilliance and sparkle created during this process is what supposedly makes diamonds a girl’s best friend.

Cut: As the only characteristic of a diamond not influenced by mother nature, the cut is open to mistakes and bad practices. Cut a diamond incorrectly and the sparkle will be hugely compromised. It is how the 57 or 58 facets (the tiny planes cut on the diamond’s surface) are angled and sized that dictate how light reflects the diamond. This effect  is known as its “fire”. If the cuts are too deep or too shallow, the diamond will be less brilliant.

The cut will also determine the shape of the diamond. The most common shape is the round cut, but others include the emerald, the pear, the marquise, the princess, the oval and the heart shape. Mine is a round cut.

Colour: The most valuable and rare colour is white, that is to say, colourless. Jewellers grade absolutely colourless diamonds with a “D”. The scale moves up to “Z” (who knows what happened to A, B and C) and, between these two extremes, diamonds will display subtle coloured tones. Diamonds with a very strong and distinct colour are extremely rare and are called fancies.

Carat: The weight, and thus the size, of a diamond is measured by carat. A carat is equal to 0.2gm, or 200mgm. A carat is divided into 100 smaller units called points. For example, three-quarters of a carat is 75 points. The average size of most engagement-ring diamonds is somewhere between one carat and half a carat.

Clarity: Many people obsess over the clarity of a diamond. But if you look into most diamonds with a jeweller’s loupe (magnifying eyeglass), you will see small “inclusions”, also known as “nature’s fingerprints”. They look like small clouds or feathers but are usually invisible to the naked eye. Inclusions can affect the diamond’s fire, but they also make your diamond unique and shouldn’t always be seen as a problem. Why worry about something you can’t see, anyway? As long as the stone is graded SI1 (Slightly Included 1) or better (best and most expensive is IF, or Internally Flawless; worst is I3, or Imperfect 3), you should be all okay and come away with a decent diamond.

So here are some tips for finding the perfect diamond for you- do you have an engagement ring story to share? What kind do you have?