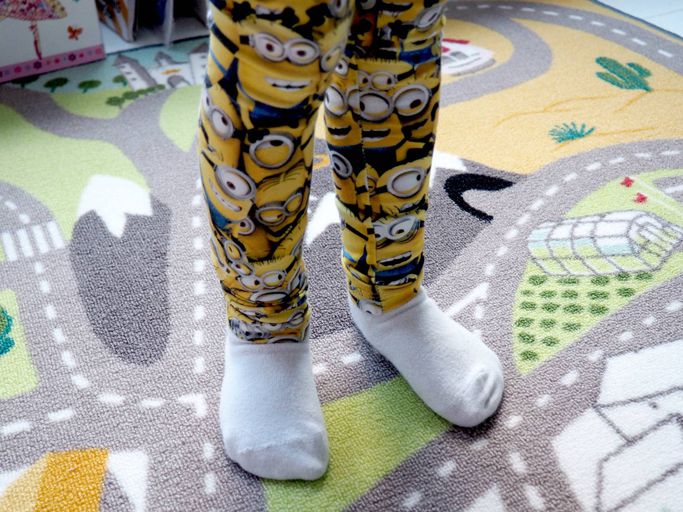 As someone who has a passion for making things looks pretty in the home, I’m not going to lie that when the children were both babies, and even up until now, I thoroughly enjoyed dressing them in a way that pleased the style lover in me. Not necessarily spending a lot of money (although actually I dread to think how much it all added up to for such a short amount of wear!), and not even sticking to one look or palette, but still very coordinated, certainly thought out, and most definitely easy on the eye.

Fast forward and Freddie has just turned 5, and Sasha will be 4 in May. Both have recently started to have a big say in how they dress themselves, and wow, has this made me realise what a control freak I can be sometimes! I inwardly wince when S comes down the stairs holding the clothes she has chosen for her day at preschool. I would never show it, but some of the combinations make my eyes bleed, and not in a cool ‘clashy’ way, but in an “aaaargh- that looks so random and not at all a good look” sort!

In an attempt to be more laid back, I took both children to H&M the other week, and said they could choose some clothes themselves (damn you, growth spurts). Their little faces lit up, and they were ridiculously excited. After much deliberation, the choices were (in my eyes) dubious: a pair of ‘Minions’ leggings, a ‘My Little Pony’ hoodie (actually I quite liked this), a ‘Frozen’ jumpsuit, a ‘Frozen’ fleece and a heinous pink top with puppies and kittens on that said ‘#Selfie’ on it. F chose a selection of ‘character’ Tshirts and some colour-mismatched trousers and hoodies. I deliberately kept my mouth shut, not wanting to influence their decisions in any way, and even though it was killing me, I held my nerve.

At the till whilst reluctantly handing over that jumpsuit to the cashier, I was channeling my inner Elsa to ‘Let it Go’, and you know what? I’m now so glad I did. The look of pride on their faces after making their choices was epic, and I’d happily accept a million grim ‘Minions’ outfits if it makes them that happy. Because painful as it is for me <tongue firmly in cheek>, I guess I’m realising that ‘character’ clothing/bedding/tat is a part of what childhood is all about.  My kids hopefully have years left of enjoying this stuff before they become teenagers and discover their inner Goth, Kappa tracksuits (these will come back you know) or whatever trend is being peddled by Teen Vogue et al in 2026.

This time will fly.

If you’re thinking that what I’m writing is rather over the top (I’m talking about kids clothes after all), you may be right, BUT it is symptomatic of an overall shift you have as a parent when your little ones get older. You are obviously still ‘in charge’, and guide them, but there comes a day when it dawns on you that you can’t make all their decisions for them, and they have to grow and stretch their wings. Even if you don’t always like and agree with their choices- Something I’m realising already only 5 short years in to this parenting lark.

You can compromise and meet in the middle. But letting them have their say is surely one of the best ways of instilling self-confidence, that they have faith in themselves that they are making the best choices for them, even if that choice is only based around a pair of leggings.

My (perhaps) sweeping observation as someone who uses social media a lot is that as a generation we are often over-styled, over materialistic, and largely control freaks, lest we let anyone see our less glorious moments. And I think that this can often extend to our children. We want them to look fabulous, have beautiful, aesthetically pleasing toys, and reside in amazing bedrooms (raises hand) that don’t have a whiff of character tat (Donna wrote a great post on this subject a while ago). Or it can go the other way, with people portraying ‘simple lives’ and photos of their child dressed in muted tones, apparently having a whale of a time with a stick, and “that’s all little Johnny will play with until Christmas”.

There is nothing wrong with either end of the spectrum perse (and you know I LOVE beautiful things for my kids!), but each has an element of control freakery, and this is now something that I’m trying to let go of more myself.

We’re off to Disneyland next weekend, and whilst I’m bracing myself for requests for all manner of Mickey Mouse and Disney Princess tat, I’m going to try and embrace it as well.