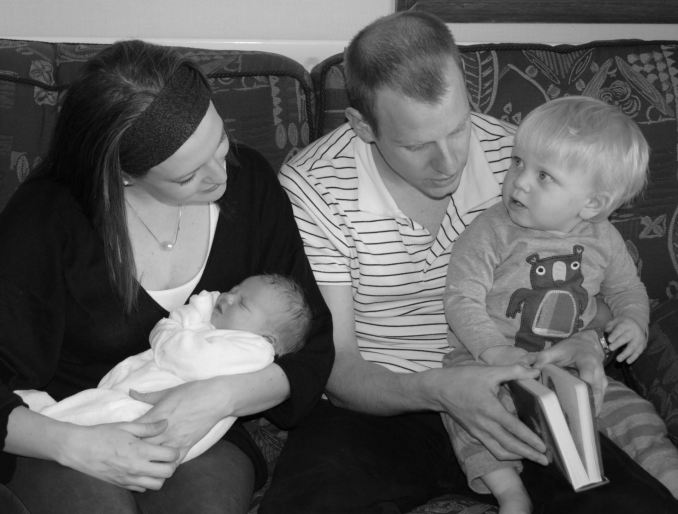 When Sasha was two weeks old, she became very poorly with an undiagnosed infection, and was admitted to the children’s ward of our local hospital for a week. Adam and I were exhausted, having to take it in turns to stay at the hospital with her, as well as being at home with Freddie (then 15 months). We were both fried, mentally and physically. I was unable to rest much post-birth, and was generally feeling run down (pre-birth I had a nasty virus that i’d only just recovered from, this will become relevant to my story later). Staying nights in the hospital with our sick baby girl was taking its toll, as was the stress that inevitably comes when your child is ill. All that worry, worry, worry. Even a healthy person wouldn’t be feeling their best at that time.

Two days before Sasha was allowed home, on a Sunday, I started to feel a little achy again, like I was coming down with something once more. However, it didn’t seem to be developing into anything too bad. “Phew” I thought, although my left arm was giving me some jip- it was really painful, and felt like i’d pulled a muscle. The last time i’d had that sensation was after a tough workout at the gym, and believe me, that hadn’t happened in long time! I was convinced that it must have been from picking Freddie up or something (he was a unit, still is!).

The next day (Monday), I woke up in the morning, and my whole body now felt like it had completed a workout, and one that I hadn’t warmed up properly for. Every muscle in my limbs felt like it had been pulled. “I’m DEFINITELY coming down with something again” I thought, and this time I just felt really annoyed. Feeling ill once more was SO not what I, nor my children needed right now.

I soldiered on, and thankfully, Sasha came home. But two days later (Thursday), my body still felt the same. In fact, as the day went on, it was getting worse. Adam had finally gone back to work, so there was no one around during that day, and I was struggling to carry out even the simplest of tasks.

My ‘pulled muscles’ were getting worse. I could barely move the highchair, or lift Freddie into it for him to have his tea. Squatting down to tidy toys away was becoming absurdly difficult. By the time Adam was home from work, and we were getting Freddie and Sasha ready for bed, things were getting worse. I could barely stand up from a sitting position without extreme effort. Gripping Freddie’s toothbrush, or opening a door just wasn’t happening. It felt like my muscles were seizing up.

Children asleep, I sat down, feeling exhausted, and little tearful. Adam suggested I get an early night, and see how I felt in the morning. “Good call”, I said, but decided to phone my Mum quickly before hitting the hay. I felt disorientated, and hearing my Mum’s voice made me upset. I told her my symptoms, and that I didn’t feel well but I didn’t know what was wrong with me. I had never experienced anything like this before.

“That doesn’t sound right, that doesn’t sound right at all”, she said. “Phone NHS direct, and see what they say. I think you should be seen by a doctor ASAP”. After giving NHS Direct a call, they advised that we head down to the EM-DOC (Emergency Doctors) clinic at the hospital to be checked out. Adam’s amazing parents stepped in to look after the children. After waiting a good hour there, we were called in to see a doctor. By this point, I needed full support to go from sitting, to standing and walking. It was so strange. Once standing, I could actually walk OK, but my muscles had just totally given up on me when it came to standing up, or gripping hold of anything. I told the doctor exactly what my symptoms were, that I had just had a baby, and that I was totally fed up because i’d just gotten over a fluey virus-thing 3 weeks prior to this. The doctor ummed and aahhd, before asking me if i’d ever heard of something called ‘Guillain-Barre Syndrome’?

“No”, was the resounding answer from both Adam and myself.

The doctor then explained that it essentially occurred when you’ve been run down, or suffered an illness or infection weeks before, and then your body’s anti-bodies, instead of trying to help you, turn on you (The bastards!), and start attacking your nervous system. This is what causes the ‘dead’ muscles, or, in some cases, complete paralysis. He called for a wheelchair, and said that I was to be taken to wait in A&E, whilst my details were taken, and i’d have to wait to be admitted, whilst also being monitored at the same time. The doctor said that I certainly wouldn’t be going home that night. I was shocked, and more than just a little upset about being parted from Freddie and my new baby.

4 hours later (oh I love the hospital waits, even when you’re an ‘urgent’ case!), I was finally admitted at 3.30am. By the time i’d been wheeled off to be assessed in ‘Urgent Care’, I was absolutely knackered, and starting to feel very frightened, because as well as not being able to move any of my limbs, I was losing the ability to swallow properly. I think this is when the docs and nurses realised that this might be quite serious, and I should have been seen earlier. Luckily for me, this was as worse as it got (the not being able to swallow quite as well).

An (attempted) lumbar puncture was carried out on my spine at 5am (collecting spinal fluid is the main way of testing for proteins that confirm GBS), before the junior doc decided to abandon ship half an hour later as he just couldn’t get it to work.  A successful lumbar puncture was carried out the next day instead by a shit-hot anesthetist who could deal with my stubborn spine and it’s teeny gaps, but I can safely say I do NOT want to repeat that experience again, no way. SO painful!

Throughout the first 48 hours of being admitted I was monitored constantly, having a peak-flow breathing test every hour, even through the nights, in case potentially deadly paralysis of my respiratory system occurred (a possible side-effect of GBS). Thankfully for me, after 2 days, I started to regain feeling in my fingers, and some movement in my legs. Reflex tests were carried out twice a day, and I was starting to show some signs of improvement. I was able to stand, and be helped to the toilet, after two days of using a bed pan (#glamour). I moved from intensive care to a general ward after three days, where I would remain for the rest of my stay.

The only way I can describe how I felt mentally at this point, was ‘weird’. I desperately missed my babies, although I feel awful saying it was more Freddie I missed at this point. I feel terrible thinking this about my beautiful baby girl, but I still hadn’t totally bonded with her, what with her being in hospital for a week, unable to cuddle her much, and just watching her hooked up to wires and drips (breastfeeding had totally gone out of the window by this point). And then there was me laid up for a week, away from her, and normal life.

Sasha was bought in to see me by Adam, after i’d been in hospital 3 days and was less poorly, but I felt a bit odd and detached. It almost felt like i’d never had a second baby, like it had all been a blur. I have to say that it took a good several months to feel the same way about her as I did with her brother, but it’s not something you really talk about is it? Fortunately, nearly 4 years on, I can’t imagine life without her, and love her and Freddie equally. But goodness, those early months were hard, and I’m convinced us being so ill had a huge effect on getting to know one another.

After 5 days of being in hospital, I had almost all feeling back in my body, bar a few nerves in my feet that still weren’t responding well to reflex tests. Adam had been a trooper on the home front, as had our families, making sure the children were cared for and we were well supported. We couldn’t have managed without them. I was to be discharged after a week in hospital, to be referred to outpatient clinics to have nerve conduction testing, physio (if still needed), and to see a neurologist. My lumbar puncture results did indeed reveal that I had contracted GBS, but that I had been bloody lucky. I was told that so many people suffer long-term life-altering side effects from GBS, and require months of intensive physiotherapy. 4% of all people who contract GBS will sadly lose their lives, despite all the best care available.

A few years on, and I have no lasting effects from contracting Guillain-Barre Syndrome, was discharged by my neurologist, and am (touch wood) fit and well. We will probably never know exactly why I contracted GBS (it only strikes 1-2 in 100,000 people), but i’m convinced that being post-natal and run-down, and therefore a lot more vulnerable, had something to do with it. It has made me so grateful for my health and family, and also for the excellent medical facilities available to us in this country. I look after myself a lot more now, and whilst a relapse is extremely rare, i’m always vigilant.

I hope my story might make someone recovering from GBS, or another serious illness post-birth, feel like they’re not so alone.

Below are some symptoms of early stage Guillain-Barre Symdrome, as advised by the NHS:

The symptoms of Guillain-Barré syndrome can develop quickly over a few hours. The muscle weakness often gets progressively worse within a few days.

The symptoms usually develop one to three weeks after a minor infection, such as a cold, sore throat or gastroenteritis (an infection of the stomach and large intestine).

Symptoms often start in your feet and hands before spreading to your arms and then your legs. Initially, you may have:

The weakness usually affects both sides of your body and may get worse over a period of several days.

In mild cases of Guillain-Barré syndrome, your muscles may only be slightly weakened. However, in more severe cases, the muscle weakness can progress to:

Some people with Guillain-Barré syndrome do not experience any pain, while others have severe pain in their spine, arms and legs.

WHEN TO SEEK IMMEDIATE MEDICAL ASSISTANCE

See your GP if you notice any of the above symptoms. However, seek immediate medical assistance if you experience any of the following symptoms: