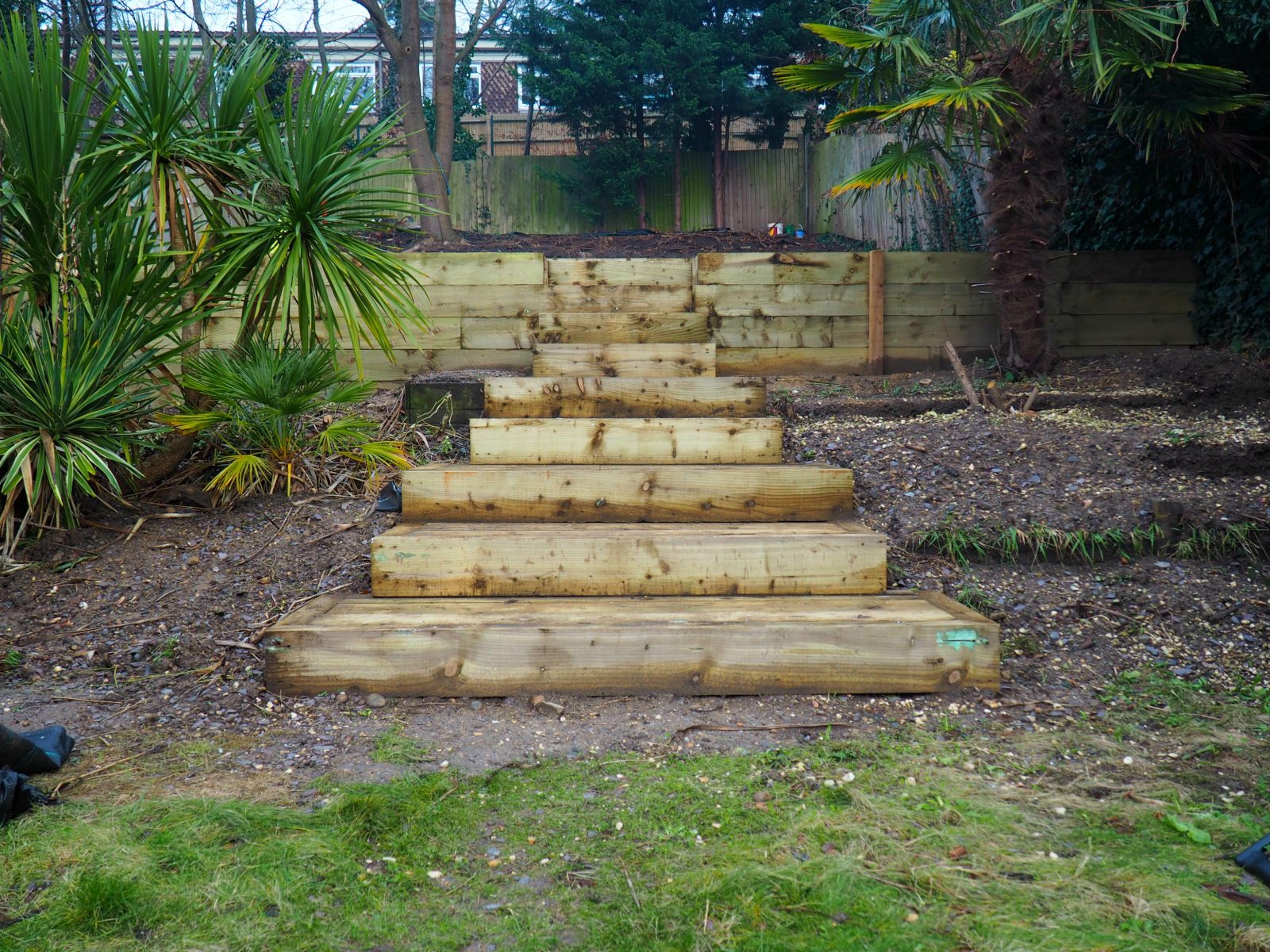 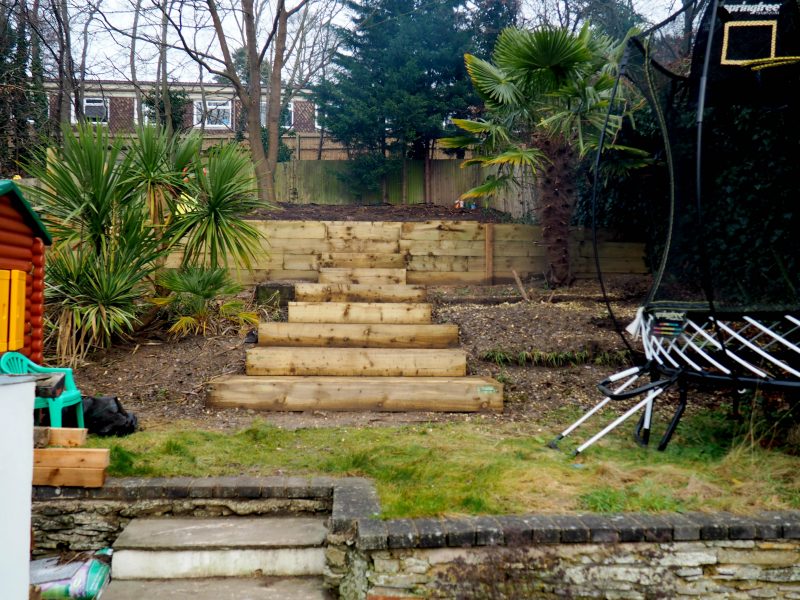 Disclaimer: I can’t promise that these photos are particularly pretty (you will, in fact, see a lot of mud), but sometimes you need to document a process before you get to the pretty stuff!

Those who read this blog regularly will know that our current home that we moved into in October 2016 has a very large, but essentially, child-unfriendly, tiered garden. It was one of the things that made me refuse to even look at the house when I saw it on Rightmove originally, until I was persuaded to actually go and see it, and it was only then that I saw just how big each tier was and had the vision that we could actually make this a brilliant and exciting garden for our children.

Well, after managing to clear a great deal of the original garden last spring, we essentially left it over the summer whilst we concentrated on other building work and bits and bobs in the house.

But now…now we have real progress!

I have some ‘before’ and ‘after’ pictures now, and you can see how much we’ve done in terms of prepping the garden for a new adventure playground area, as well as new planting. We still have a long way to go, but we’re hoping to get the go ahead for the children’s new play area which is to encompass proper rubber chip surfacing and a large new climbing frame, as well as having the trampoline and playhouse moved to new spots. All going well this should be done within the next couple of months, leaving us with some new sleepers to put in either side of the new steps, and then some more earth and appropriate plants over the next couple of years.

We roped in our builders who carried out our kitchen renovation, as being a tiered garden there was quite a lot of physical donkey work involved that we just couldn’t do ourselves, and they did a great job!

I’ll show you exactly what we’ve done, and what it was like before… I have to admit that seeing these new pictures makes our garden look extremely stripped-back and desolate now, but obviously this will change in due course. 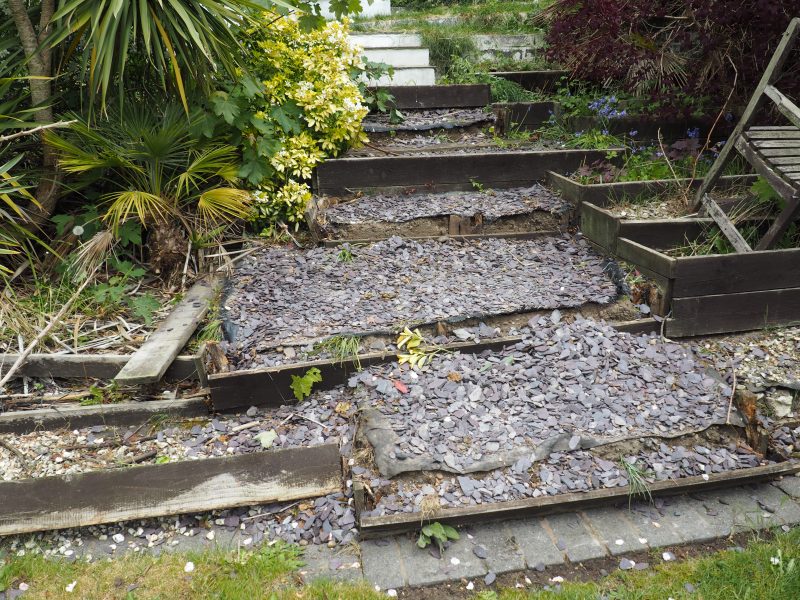 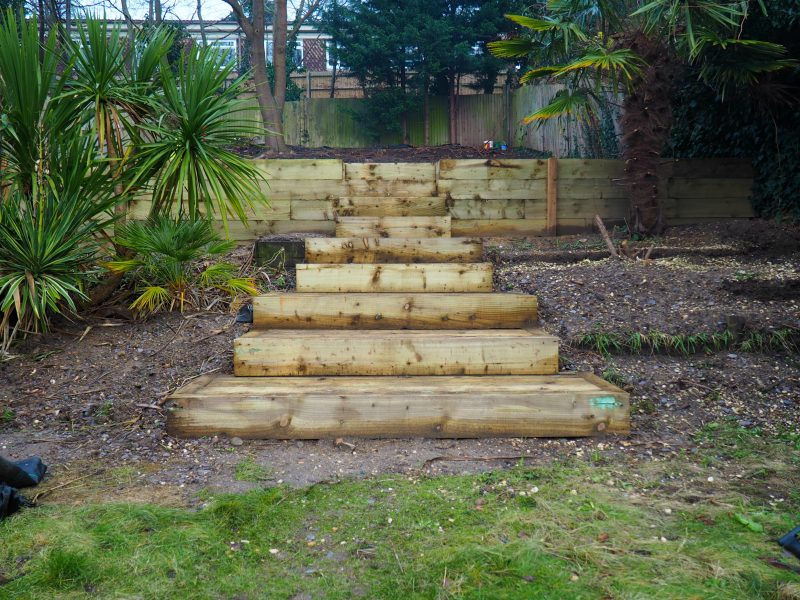 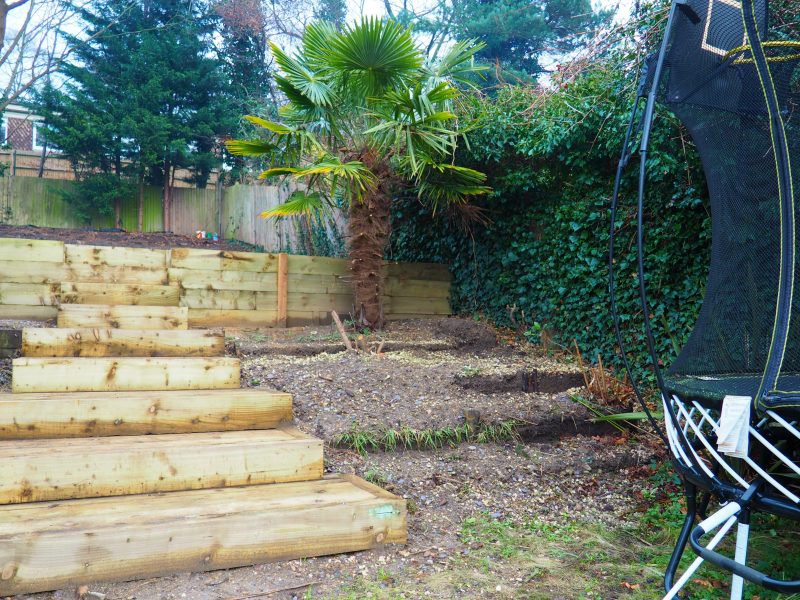 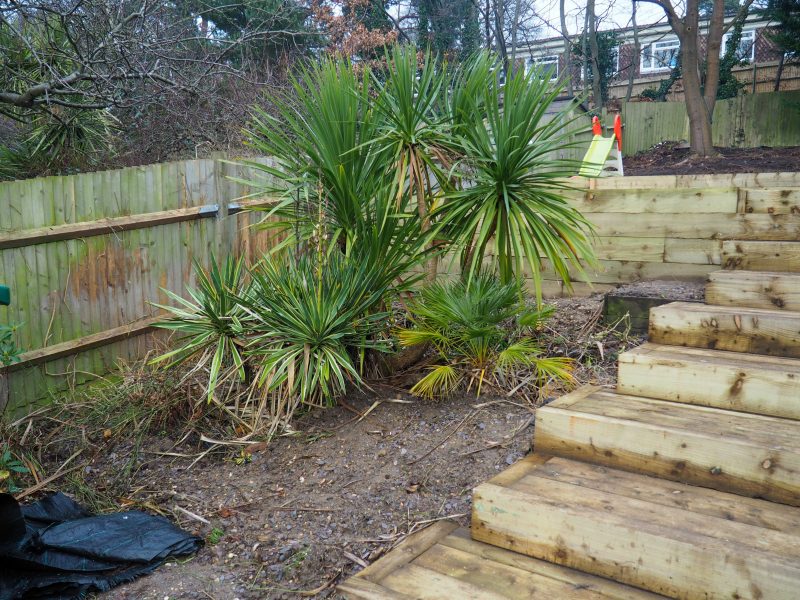 As you can see above, we’ve replaced the extremely dangerous and broken steps with solid new ones made out of railway sleepers. We’ve had the majority of vegetation removed from either side of the new steps (although keeping a couple of ‘statement’ plants/trees) so we can start afresh. We still need to put a couple of walls of sleepers in either side to create new, sloped beds and so any new soil added doesn’t slip down. Once this has been done then we can start to think about what plants will work best. I’m am SO pleased we have these steps now as they are so much safer for the children, plus they’ll look great once the rest of the garden is finished as at the moment they look a little stark. 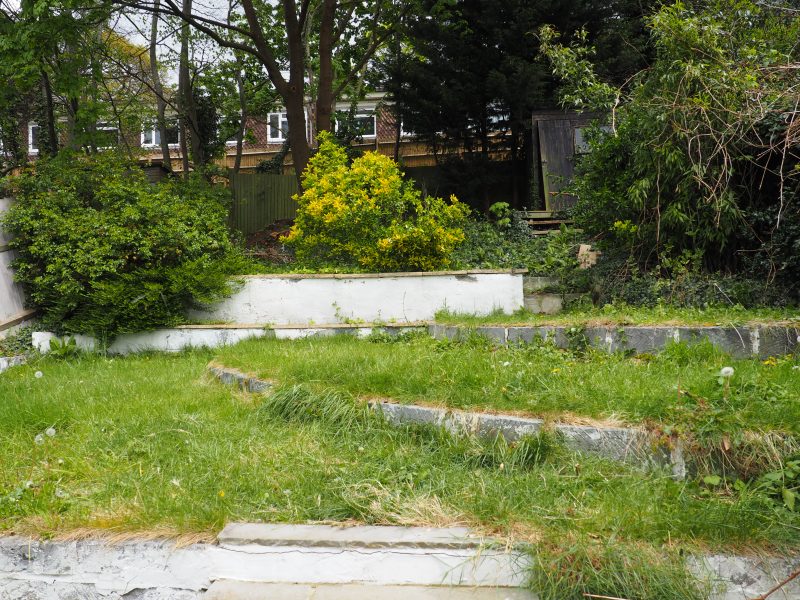 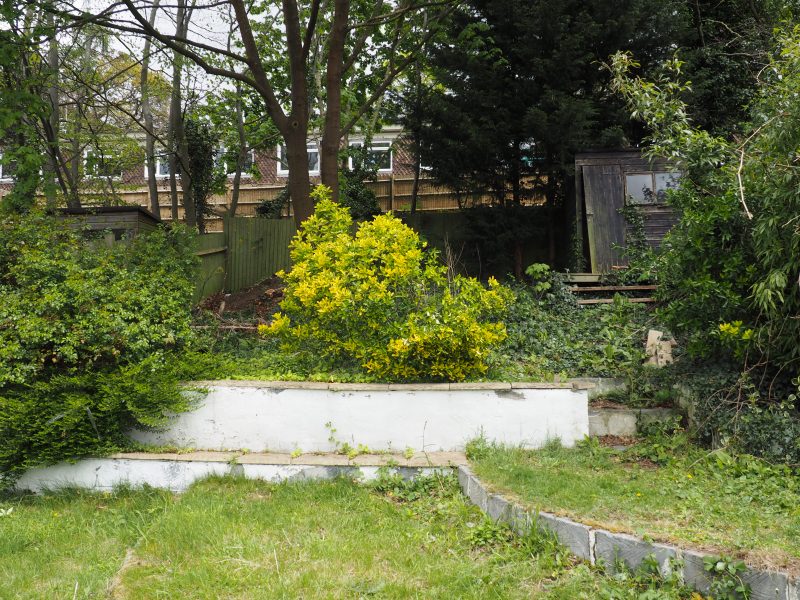 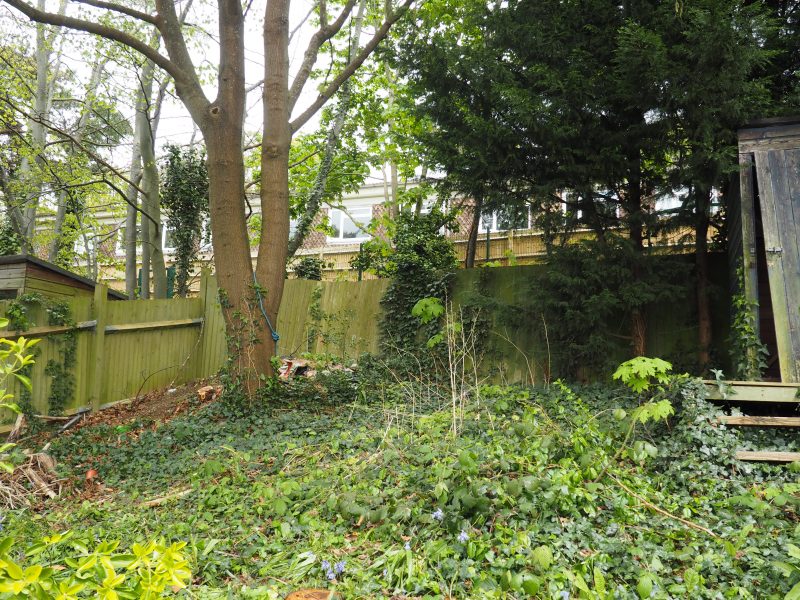 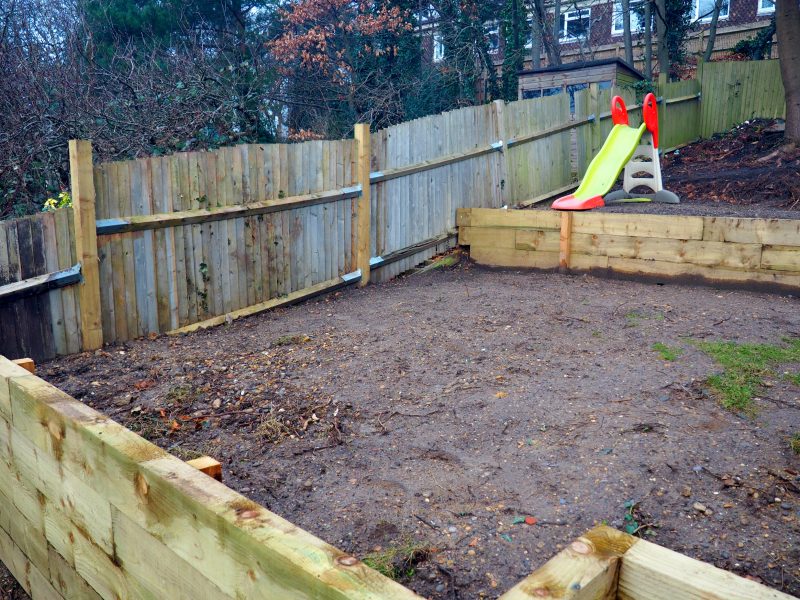 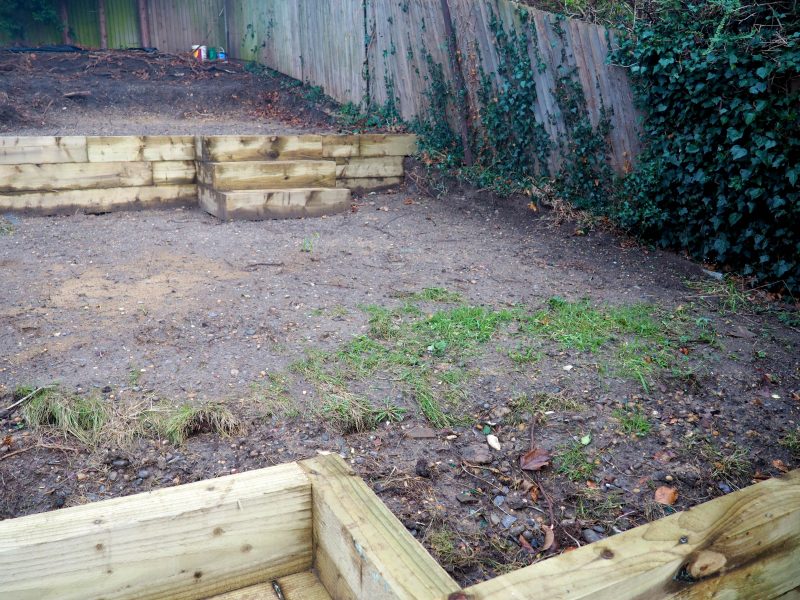 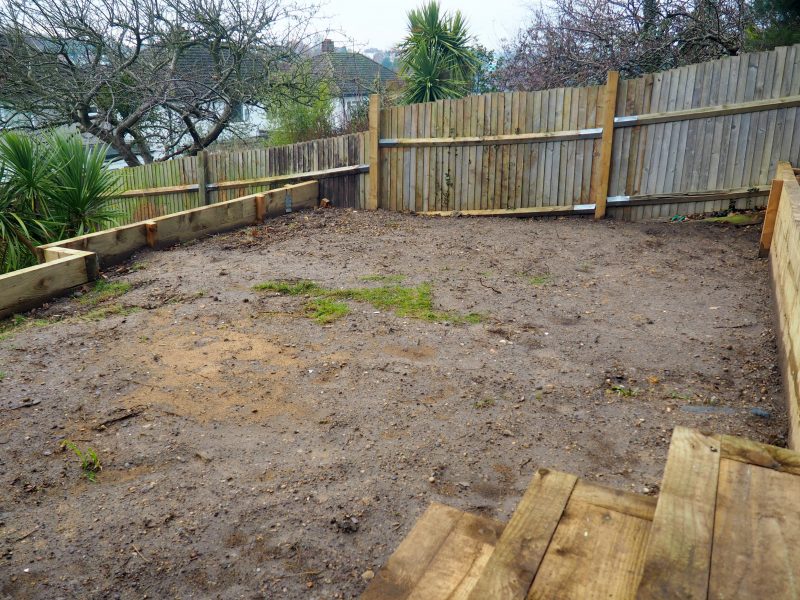 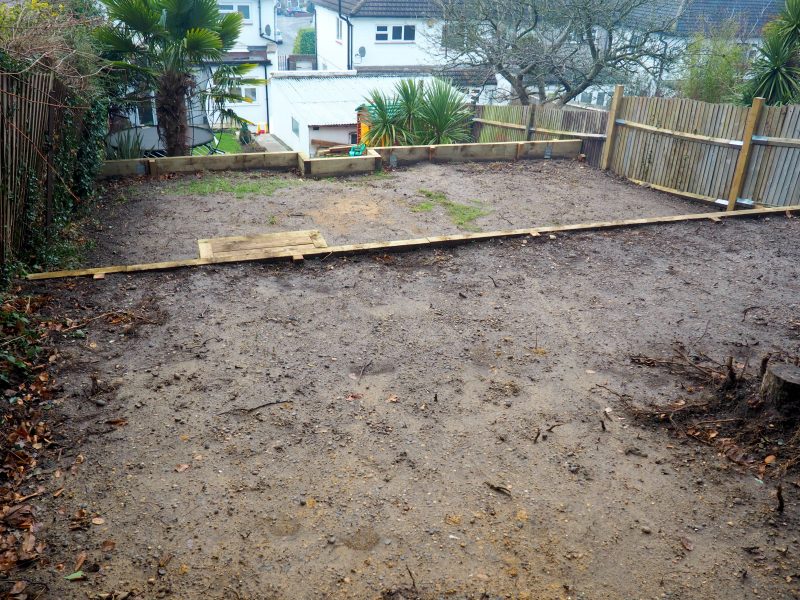 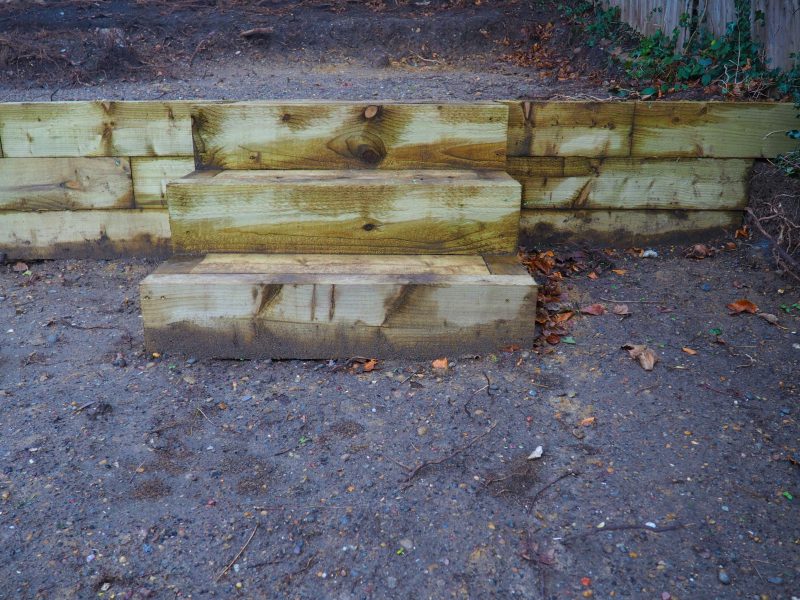 What a difference, even if it does look like a mud wilderness at the moment! Some people might wonder what the hell we’ve done as the garden was so lovely and green before, but it will hopefully be like that again at some stage. To be honest, we had to do what we did, as this back bit of the garden was in so many funny mini-tiers and levels, plus the back wall was leaning and unsafe so we had to get it sorted. It was just such a waste of space when it was all overgrown and wasn’t levelled. Now we have two big spaces in which to put a large climbing frame, as well as move the trampoline and playhouse to.

We’ve also built a new, small set of chunky steps leading up to the very back tier, which again, are much safer for the children. Once the children’s bits have been installed and the surfacing down (hopefully nice, muted green rubber chipping to blend in a little more), we can perhaps place some plants/shrubs in pots around the outside of the play area. The builders also replaced that dangerous back wall with one made out of sleepers and posts n’ concrete, so again much safer, and also it looks much nicer too. Sloane and Sons have created a great guide on how to make your garden safe and child-friendly.

I hope we can show in a few months time what can be achieved in a tiered garden to make it child-friendly, and I’m so excited to get working on the climbing frame area with a favourite company of mine (all going well!).

Will update you with future progress as and when we have it!

Do you have any garden plans for this year? I’d love you to share them in the comments below.