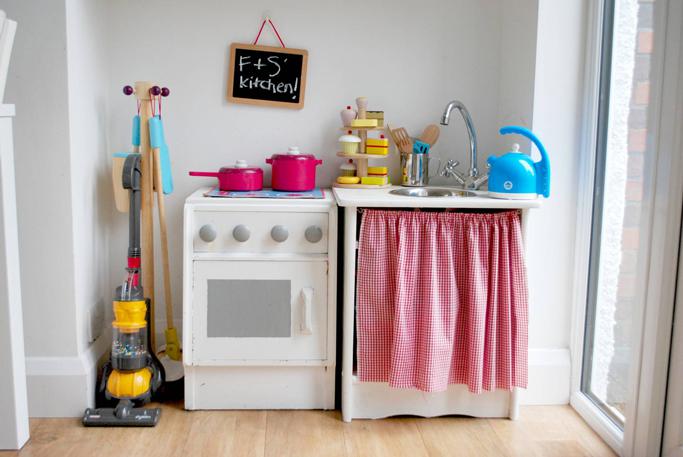 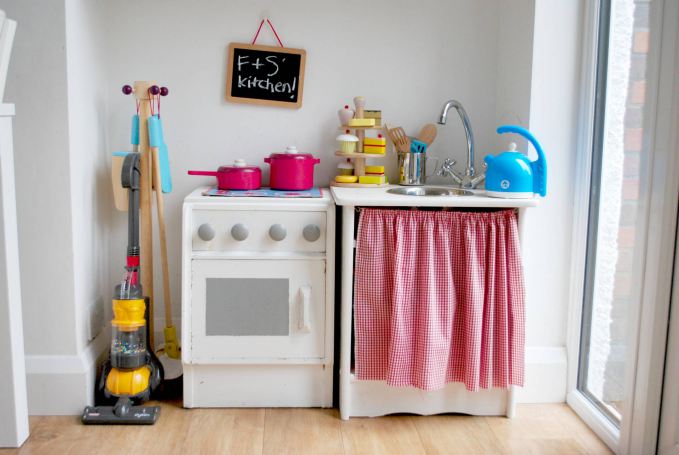 Make your own toy kitchen

I had a look at several shop-bought kitchens online, but the really nice ones were so expensive, and the cheaper ones looked, well, cheap and rather flimsy.

Adam and I made the kitchen (pictured) for Freddie’s 2nd birthday, and I’m not going to lie, it was a little tough finding the time to really get cracking on a project like this, what with work/kids/trying to maintain a social life! But it’s really not that tricky to make.

The first thing I did was source the furniture to make the oven and sink units. I originally scoured charity furniture shops near where we live (luckily there are loads of good ones, selling furniture at really cheap prices) for a single, rectangular unit, but couldn’t find anything that really matched my vision.

I then saw THIS for £15, and knew then that I had found my oven: 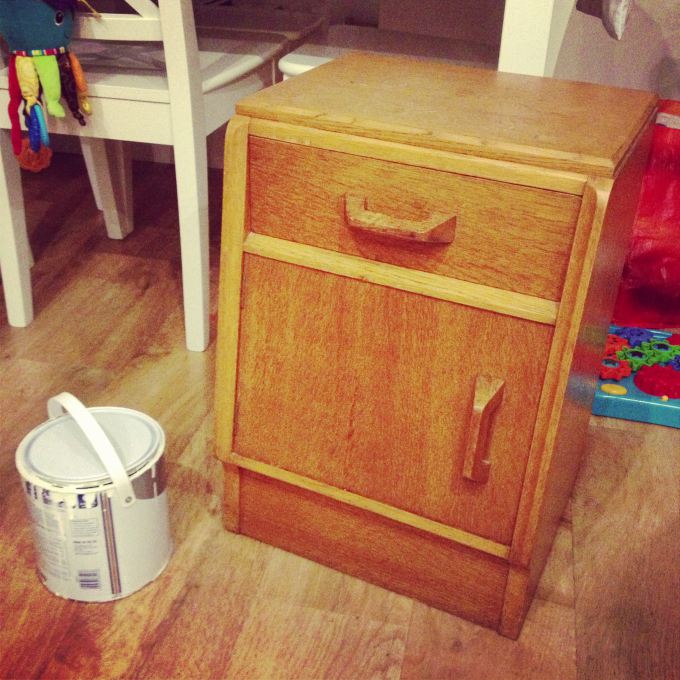 I sanded down the unit, and then gave it several coats of white paint-for-wood over a week-long period, which then made it look like THIS: 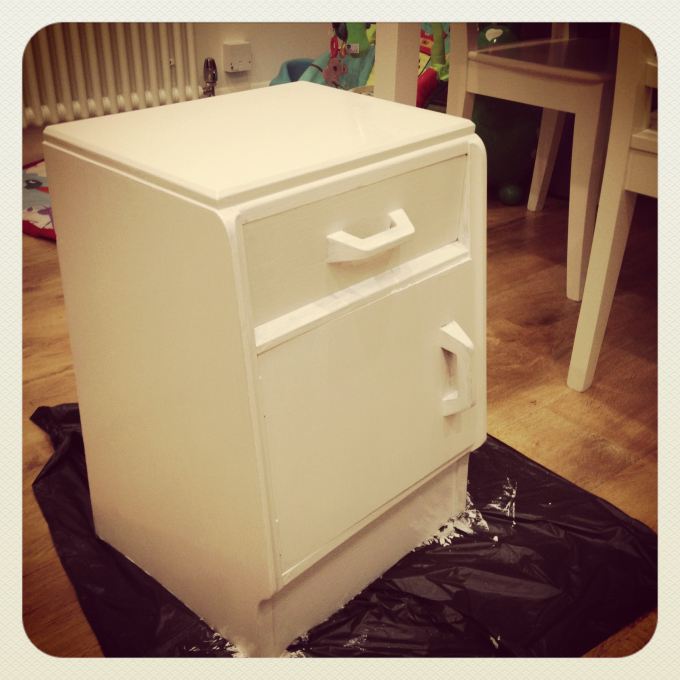 Next, I found an old pine bedside table in a charity shop for £12. It had a drawer (which would later be removed), but no door, so it was perfect for my vision of what the sink unit would end up looking like, and it meant that I didn’t have to fiddle about with taking a door off of its hinges.

We got our friend Mark, who is a carpenter, to cut a hole in the top of the table with his electric saw. The size of the hole matched a metal dog bowl (£3) that I had bought to make the sink. Mark drew around the dog bowl with a pencil, so he knew what size to make the hole, and ensure that the ‘lip’ of the bowl sat on the edge. You could do this yourself of course, or use a hand saw, but I didn’t fancy my chances of doing a very good job! 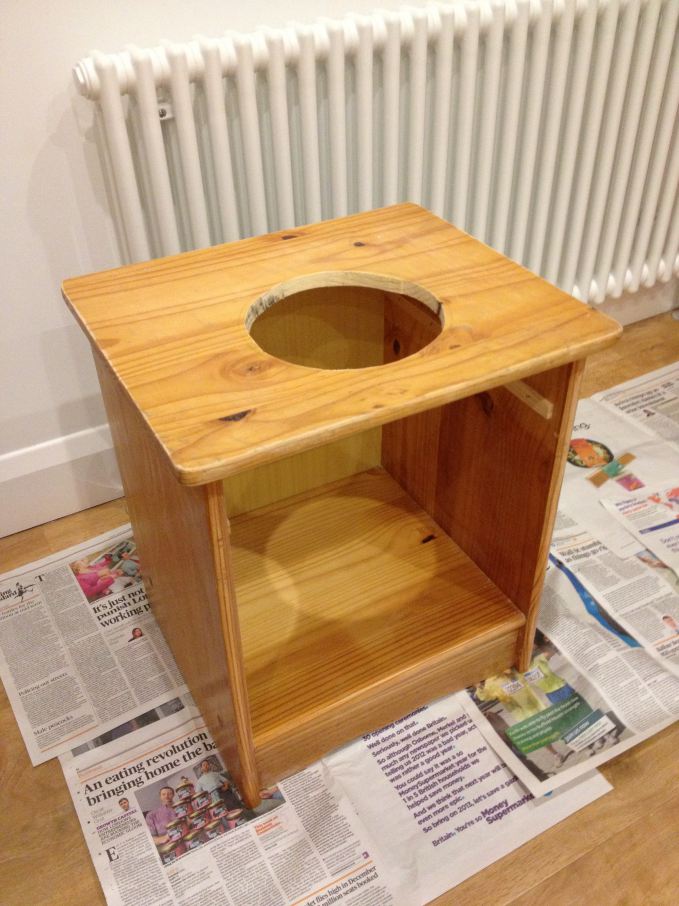 As with the oven unit, we sanded down the table, and then gave it several coats of white paint: 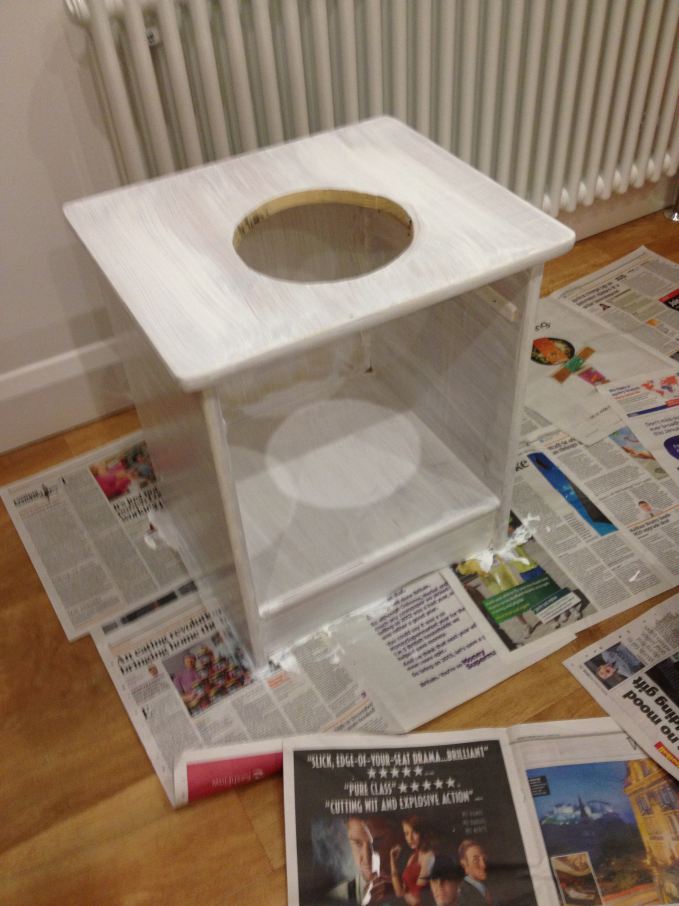 Once both units were fully-painted and totally dry, work could begin on the finer details of the kitchen.

We glued the bowl in the hole using super-strength adhesive glue from our local hardware store- definitely worth asking what they recommend when you go to buy your glue. When I told the shop assistant what we were making, and what needed gluing together, there were some raised eyebrows! 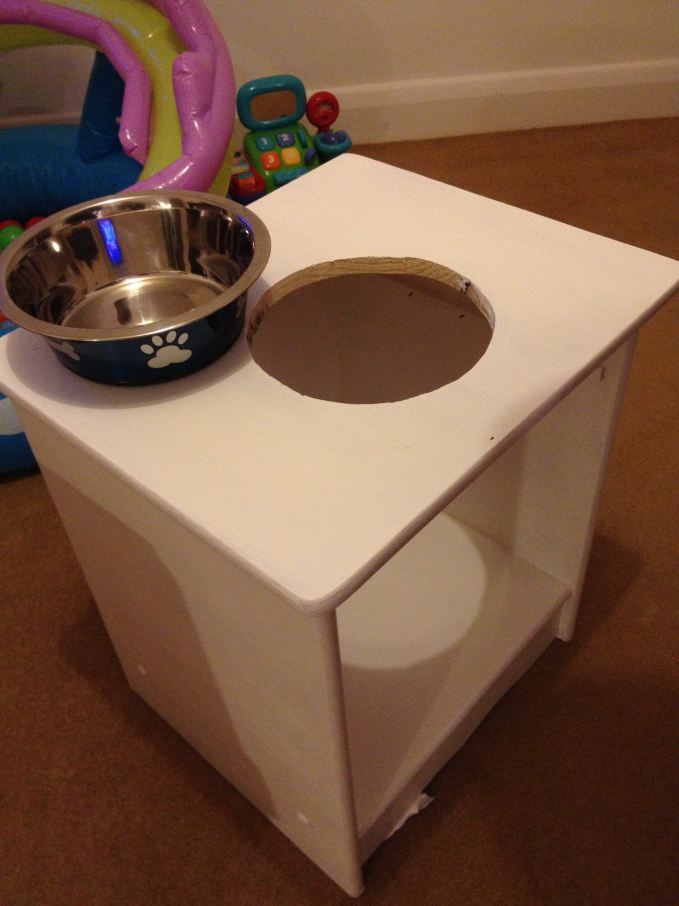 Next, we attached the tap (£10 from an eBay store) to the sink unit. At first we used the glue, but this turned out not to be strong enough, so we have ended up actually drilling a hole and fixing the tap properly using the screws that it came with. Definitely a lot more sturdy, especially when toddlers are a bit heavy-handed at times! 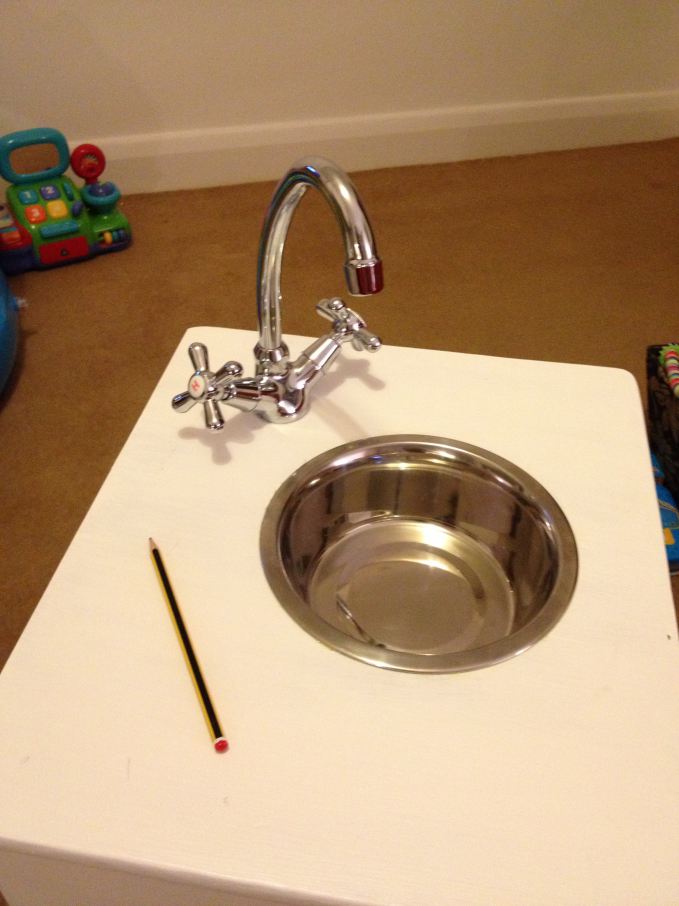 After this, we turned our attention to the oven-unit. I drew a rectangle using a pencil onto the oven door, and then followed the lines and stuck down some masking tape in preparation for painting a ‘window’ onto the door. We used some leftover Farrow and Ball paint in ‘Manor House Grey’ for the door window and oven knobs. 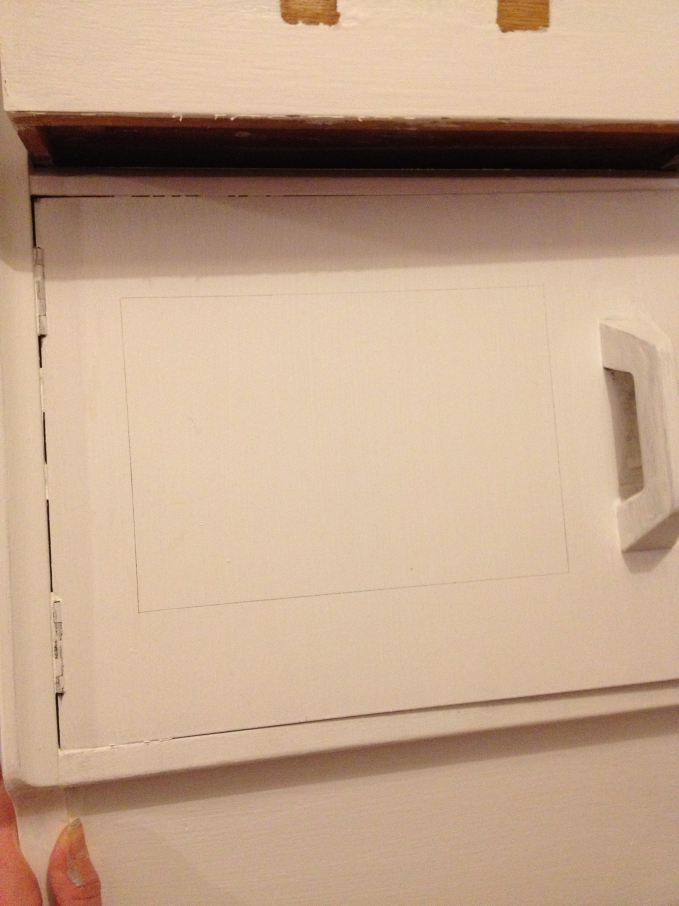 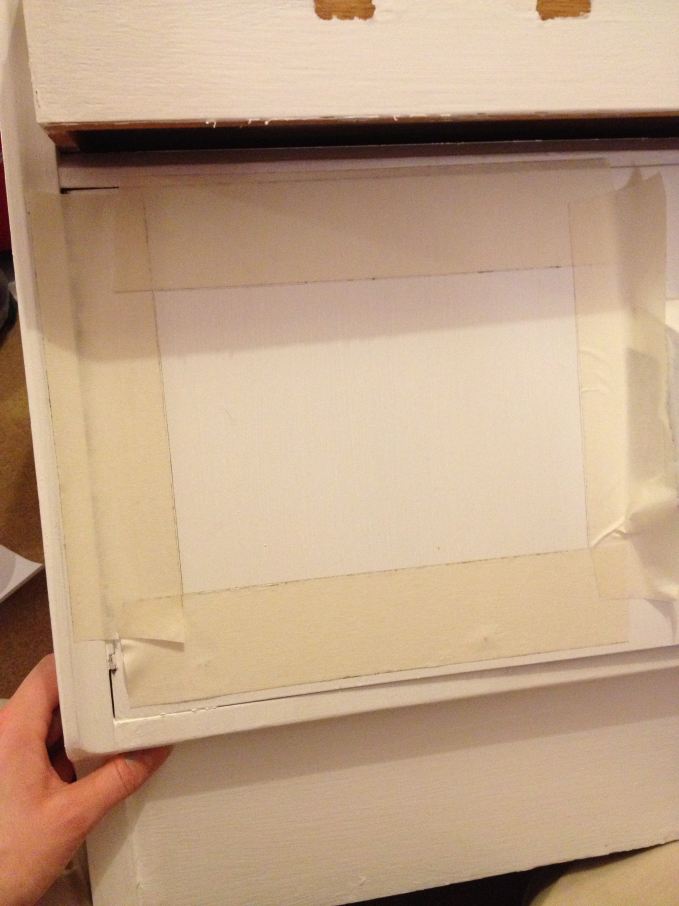 Once the knobs were painted and dry (we did three coats on each knob), Adam glued them (spacing them out equally) onto what was the drawer of the oven unit. The knobs were just regular pine knobs that can be bought from DIY stores, usually in packs of 2. We obviously had to remove the original drawer handle in order to do fix the knobs on. We also then removed the masking tape on the door, and this would reveal a perfect grey rectangular ’window’. 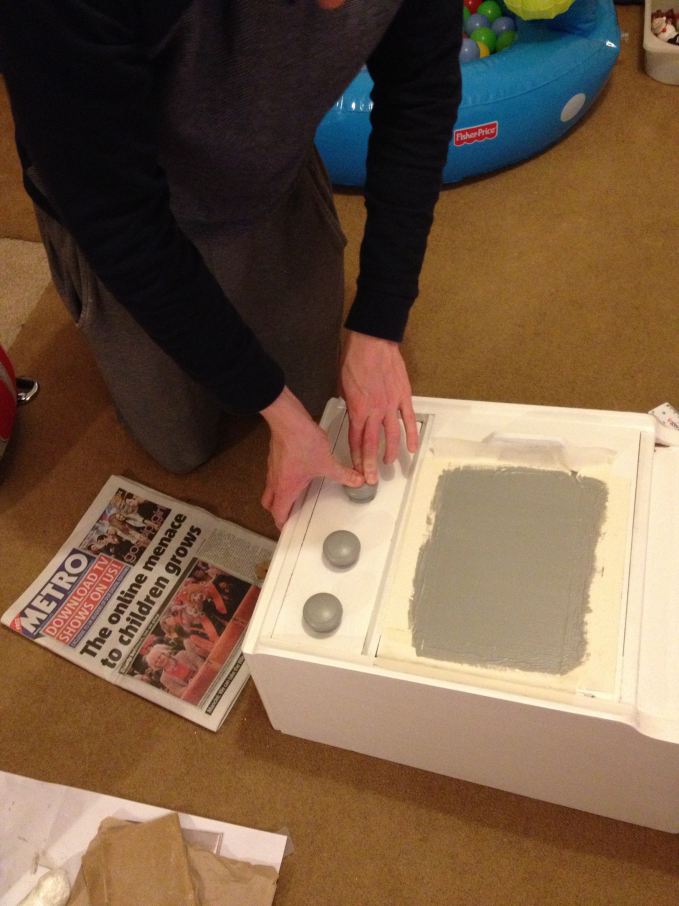 For the hob, we started off by painting two grey circles onto the top of the oven unit like below. This was made easier using a piece of cardboard that had two ready-made holes in (we got this from a set of wooden pots and pans that were going to go in the kitchen): 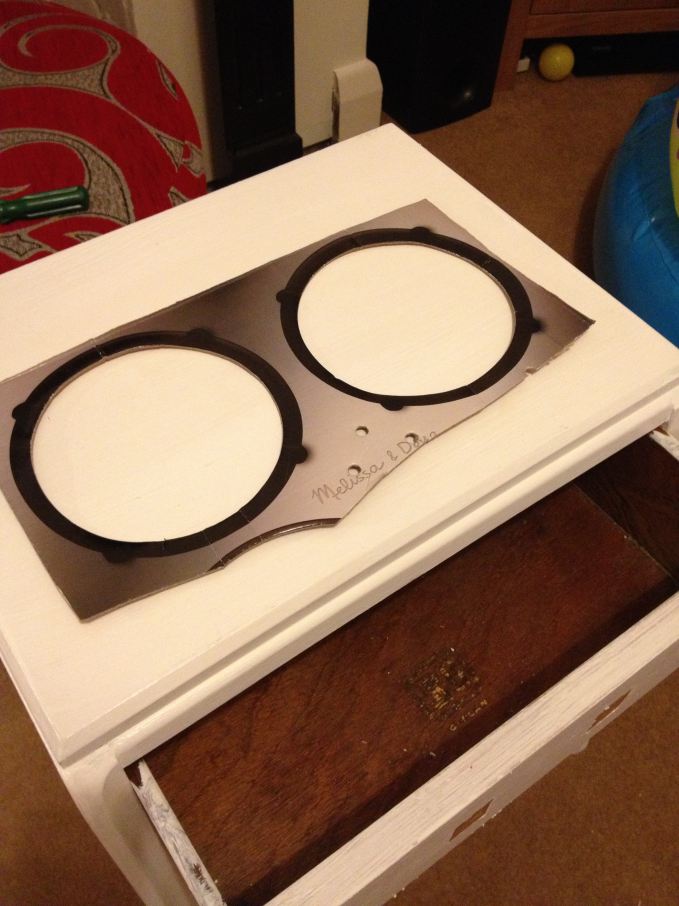 In the end though, I wasn’t happy with how the circles turned out, so we used a stick-on cardboard hob that came with another cook set. We will see in the long run if the cardboard hob lasts. If it doesn’t, then I will have another go at painting and varnishing a hob on top. I think I just needed a bit more time to do it nicely (which we didn’t have if we were to complete the kitchen by Freddie’s birthday).

Lastly, the sink unit needed a little curtain to hang under the sink (see top picture), to keep all the pots and pans and food out of view when they’re not being played with. I chose a piece of red gingham material from a local sewing shop (about £1.49 a metre), cut it to double the width of the area that I would be hanging it, so when hung it would ‘gather’ nicely. I cut the length so that it dropped to just where the unit hole/area/opening ended. I then folded over the material about 2 cms from the top, pinned it, and then stitched across so a ‘tunnel’ was created. A length of wire (the sort that you hang net curtains on) was threaded through and then the curtain was hung on little hooks that Adam had screwed securely into the side of the unit. 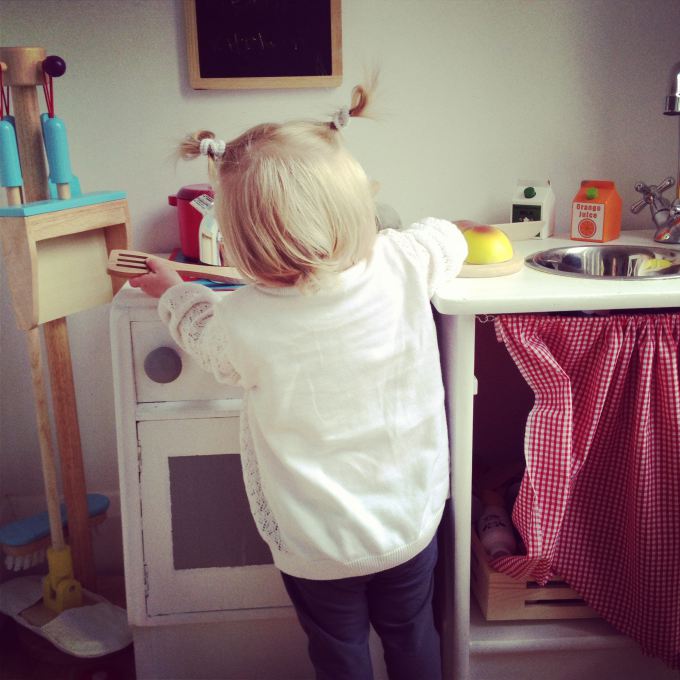 Bargain! (for a wooden kitchen with a personal touch!)