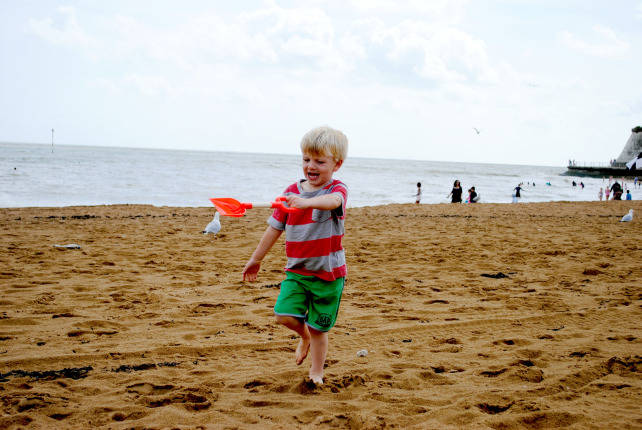 Last Friday the kids, my Mum and I, hopped on a train to Broadstairs for the day. This had been on the summer bucket list for aaaages, and with the preschool holidays and seemingly good weather coming to an end, it was very much a ‘now or never moment. Well, it was very nearly ‘never’, as on arrival the heavens opened and our planned fish and chips beach picnic was scuppered, meaning that we had to take shelter for lunch in a nearby pub overlooking the sand. Never usually a problem, but with two small people in tow, an afternoon in the pub doesn’t hold quite the same appeal… As the rain lashed down, Sasha fell asleep in her lunch, and Freddie wailed that “we’ll never get on the beach, Mummy”, I was beginning to wonder if he was right (obviously you never tell a 3 year old this, you continue to express MEGA optimism that said unlikely thing, is, of course, still going to happen).

Thankfully, it brightened up, and whilst we were rained off the beach on two more occasions (poor S was rudely awoken up in the buggy by the rain as I dragged it/her across the sand as fast as I could, due to the fact that I didn’t think bad weather was expected and therefore I didn’t pack the raincover, the FOOL that I am! Besides, there was no room- do you have any idea how much shit you need for a day at the beach with two toddlers? I imagine people about to embark on a 6 month tour of Afghanistan pack less. Anyway, I digress…). We managed to find shelter, and the rest of the day was dry and lots of fun, with plenty of hole digging, sandcastle building and running around like a maniac taking place.

Broadstairs is a fabulous, picture-postcode, seaside town. I have always been a fan of Whistable (also on the north Kent coast), but I think Broadstairs, with it’s glorious sandy beach, sea-view eateries and Victorian charm, might just have topped it. There was lots more I’d like to do there, and a night in a B&B is definitely in the pipeline, but the children were satisfied with the sand and the giant ice creams we purchased, so the day was a success, despite the dodgy weather.

Scroll down to see some more pictures of our day!

^^^A couple of sandcastle survivors! F & S thought it hilarious to keep knocking them down!

^^^Granny was chief sandcastle builder, whilst i was in charge of digging a big hole to make a ‘car’ and ‘seat’. You’ve found a new talent in your retirement, eh Mum?!

^^^THE most AMAZING coloured beach huts! I thought I’d died and gone to photography heaven when I clapped eyes on these beauties. I would LOVE to own one

^^^A couple of dinky little sailing boats and the local lifeboat- seaside staples in my eyes.

^^^Freddie absolutely adores the beach, and it was wonderful to see him run around beaming from ear-to-ear. I’m hoping he’s at the age now where he’ll remember some of the things we’ve done and he’ll have happy childhood memories.

^^^Brooding clouds over cliff tops: We definitely didn’t pick a winner of a day weather-wise!

^^^Our beautiful baby girl, looking so grown up 🙂 It looks like she’s got something in her eye, but she’s actually laughing as she brushes her hair away!

WANT SOMETHING SIMILAR?! READ  A May Day in Brighton

^^^Not a baby anymore, but a proper little lady

^^^I HAD to take a picture of this shop! It was the sort of shop that harked back to my childhood memories of holidays by the sea, a shop that sells everything you might need to a day at the seaside. I love the colours too!

^^^Obligatory seagull picture- there were loads of them in Broadstairs!

^^^One of the many ‘Olde Worlde’ buildings in Broadstairs, this one a lovely-looking bakery. I’d like to explore the town further.

Have you been to Broadstairs? If so, any hints of must-see places to visit/eat at?

Teaming up with ‘Let’s Talk Mommy!’ and ‘Share with me’